After our epic drive across Borneo we arrived in Sandakan and found a hotel called The Mayfair. After we settled in I asked the owner if there was a cinema near by, because we wanted to see The Avengers. His answer was brilliant; "No, but there's one in your room!" and boy, was he right! The room itself was clean and basic; double bed, air-con, bathroom with a decent shower. The winning feature though, was the TV. We had a big flat screen and the owner had a collection of literally thousands of DVDs for us to borrow, free of charge! We didn't get to see the Avengers, but with so much choice we didn't really mind!

Our new hitch-hiker friends, Alexandria and Stuart, stayed in the same place and after we'd freshened up we went out for a little birthday dinner on the waterfront. It was a delicious delight.

The next day the four of us decided to take the car to Kinabatangan River, which was two hours or so away, and once there we hired a boat to take us on a cruise to see some jungle life. The bad thing about the way we did it was that our boatman didn't really know much about what we were looking at and hardly spoke English, whereas if we had gone with one of the expensive tour options, we would have been given much more information. Luckily though, there were some official tour boats just ahead of us so we followed them and got to see some brilliant things! At one point we stopped the boat right under a snake that was sleeping in a tree, and a bit later we saw a big monitor lizard on a branch. Unfortunately we couldn't get any good snaps of them as they were so well camouflaged, but below are a few of our favourite monkey photos... 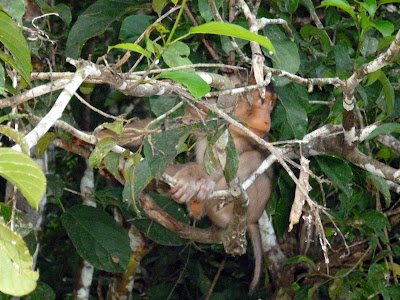 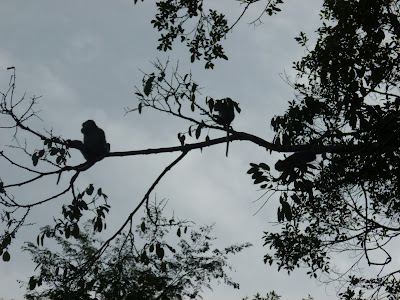 We also saw a kingfisher and a few other birds we couldn't identify. Apparently there are elephants in the forest, but sadly we weren't lucky enough to spot any. After the two hour tour we set off back to Sandakan and actually saw one of the best animals yet! I spotted a big horn-bill sitting on a telephone wire which was fantastic because Dave and I both really wanted to see one. Again, we didn't get a picture but these birds are so beautiful and bizarre, we've included a photo from another website.
The next day we went to the Sepilok Orang-utan Sanctuary, as the previous day hadn't quite satisfied our primate watching urges. This place is brilliant. It's a bit tricky to get to without doing a tour or having your own transport, but it is possible to get a bus. They're not very reliable though so we managed to get a group together and hire a private van. The sanctuary is a part of the rainforest where the orang-utans come to get food, medical care and where illegally captured ones can be brought to be rehabilitated. They are fed twice a day and the entrance fee covers you for both sessions. As we walked along the short board walk to the feeding deck we actually spotted a couple in the trees - it was amazing! We ended us seeing about ten in total, all of different sizes and with noticeably different personalities. What really struck us though, were their eyes. They look so human and it was really fascinating to watch them munch on fruit, just a few meters from where we were standing. Malaysians call these beautiful animals orang-utans too, which apparently translates as "man of the forest" - a truly fitting name. 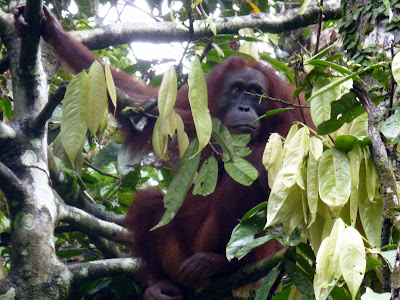 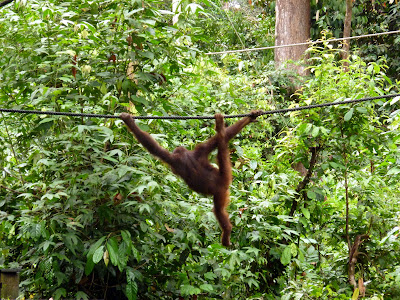 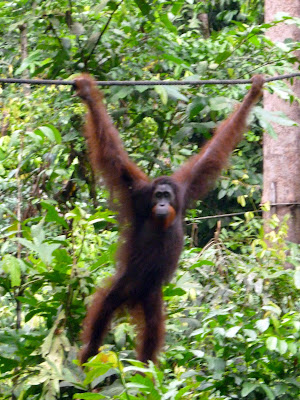 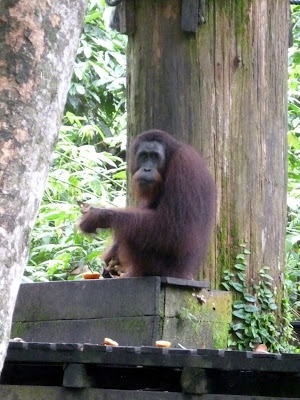 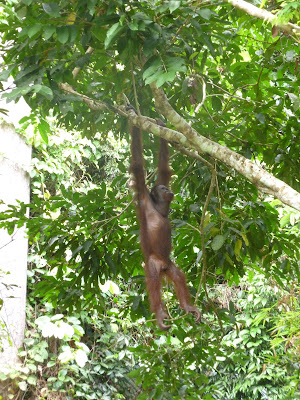 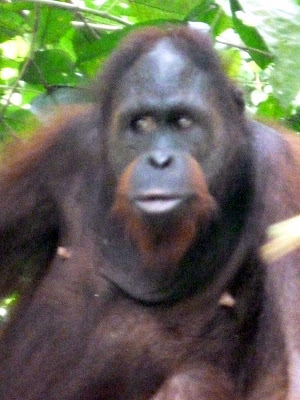 Generally the town of Sandakan is a bit naff, with little to do. However it is definitely worth visiting, as it makes a great base to visit these fantastic places from. Plus, if you stay at The Mayfair, you'll have plenty of entertainment to fill the hours between your adventures!