Brazilian Frutas In My Mouth

I have done my best to be informative and enthusiastic in my food posts from Brazil but I must admit that generally speaking the food hasn't really thrilled me. That was a bold statement and maybe hindsight will change my mind but as it stands there is just one thing that I miss eating now that we have we left, and that's the fruit.

Brazil is the only tropical country in South America (or so Simone said in the cooking class!) and the fruits there are like nothing I've ever had before. Okay so we ate a lot of delicious watermelon in Korea, incredible mangoes in the Philippines and of course Britain is great for apples and strawberries...but the variety of fruits in Brazil is mindblowing and I honestly have never eaten pineapple like that before. I have a lot to tell you about and am worried I'm already writing too much so I'll try to keep the word count down... 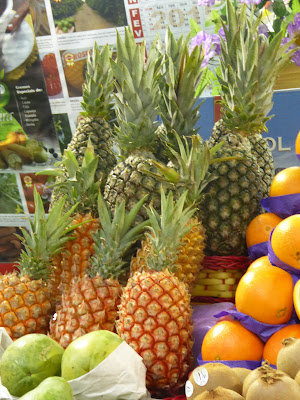 We'll start with an easy one - pineapple.

I say easy one, but we actually encountered two types of pineapple in Brazil. We didn't manage to try them side by side so cannot tell you how they differ from each other but none of it tasted like what we have in the UK. For starters, there is no woody central part. All of the flesh is edible and wow, it's juicy! It is also very sweet with hardly any of the acidity that one might expect. Definitely a winner and one of our most regularly selected juices. The taller ones you can see at the back of this photo have quite pale flesh and Dave bought a bag of it at a service station once, plucked from the back of a van and very skillfully chopped right in front of us. I will confess though, that I never bought one from the supermarket because I just don't possess the strength required to break into those bad boys!

Barbecued pineapple is a Brazilian classic. It tastes pretty good, especially when sprinkled with cinnamon sugar. Just remember to peel it before you grill it! 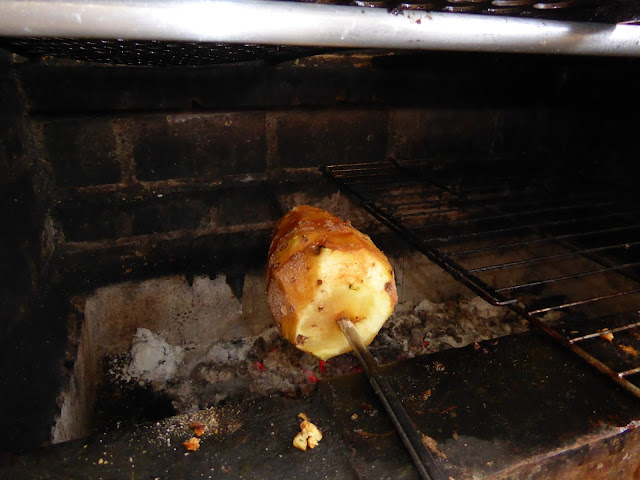 What are these bizarre and intriguing looking things below? Okay they are just grapes, but don't they look weird! They actually tasted pretty much like standard grapes though. 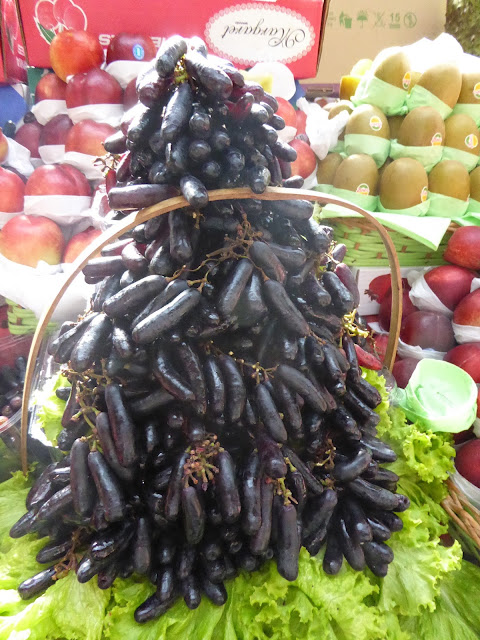 This next fruit is a custard apple. We had trouble describing the flavour of the juice, but when we tried to actual fruit it was a bit clearer - somewhere between a mango and a pear. I'm not a fan of pears so would rather just eat a delicious mango but it is definitely interesting and worth trying. 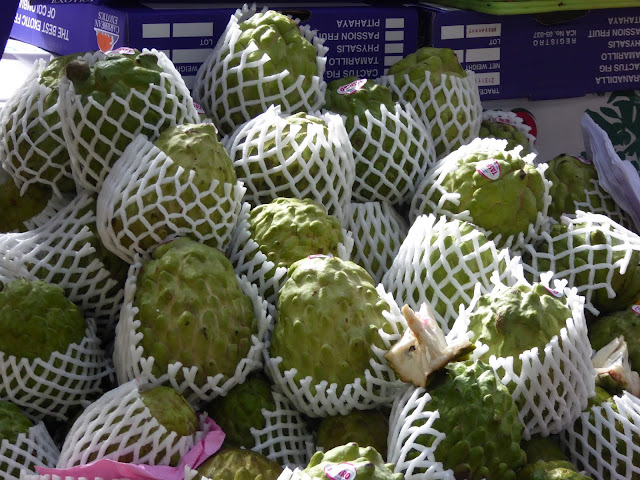 Bananas are everywhere in Brazil and there are quite a few varieties, but since they all pretty much look the same, we didn't take any photos. Now we all know how I feel about bananas so clearly I didn't do any taste testing but this is what people told me about them:


Ok I can't resist any longer, I need to tell you about açaí! This was by far the most significant fruit discovery of our time in Brazil and I am going to try really hard to keep this brief. Açaí berries grow on a tree in the Amazon. They look similar to blueberries and have purple juice. Because they are perishable and hard to transport, most people in Brazil only really know the fruit in frozen form. It is sold as a frozen pulp, which is then blended with sugar and sometimes honey, banana, strawberry and even guarana - a berry that contains about twice as much caffeine as a coffee bean. Açaí is considered a superfood, and you may have come across it in health food shops, but the way it is prepared and eaten in Brazil means it is highly calorific. Nevertheless, people eat it in huge quantities, especially by the beach. And in Manaus, which is a city in the middle of the Amazon, we managed to try fresh juice, although it really just tasted the same as the frozen stuff.

I have heard the flavour described as being like a cross between chocolate and raspberries...I'm not sure I agree with this, but can't for the life of me think of a more accurate description! If you want to try it for yourself, either book a trip to Brazil or come and visit us in Maidenhead where, if you're lucky, we'll let you sample the açaí liqueur we brought back with us. 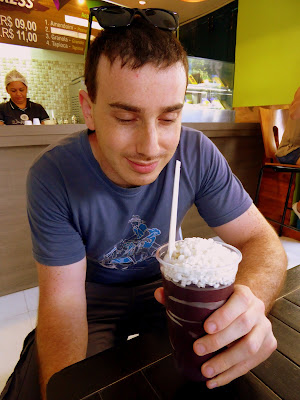 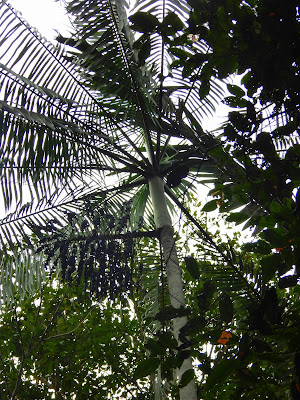 Below is a fruit called inga. We were given loads of it by the "local" people we visited in the Amazon. It grows in pods that are about two feet long and the black seeds are roughly the size of a plum stone. The white part is edible and has a subtle, sweet flavour with the texture of wet cotton wool. If I had to compare them to anything it would be lychees, although I'm not too sure why. They are definitely the strangest naturally occurring thing I have eaten. 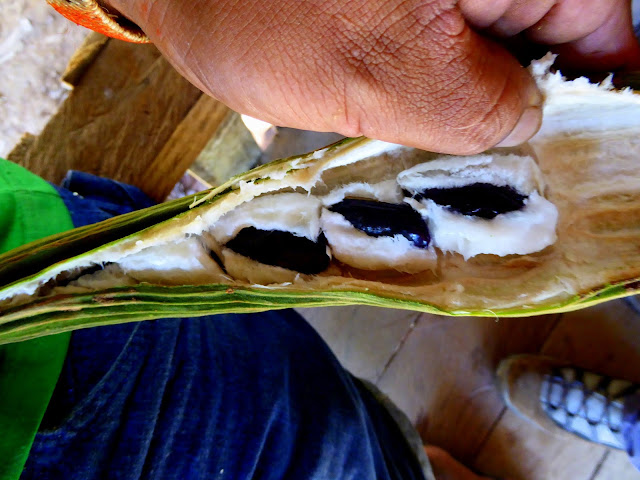 This little fruit below is called umbu, and unfortunately by the time we found out about it, the season had passed. We did get to try it once - the skin was quite thick and by the time we got into it, most of the juice was running down our arms! The flavour was very sour and citrusy, like a more flavoursome lemon. I'd love to have tried it as a juice and will make a mental note to try it again if I get the opportunity. 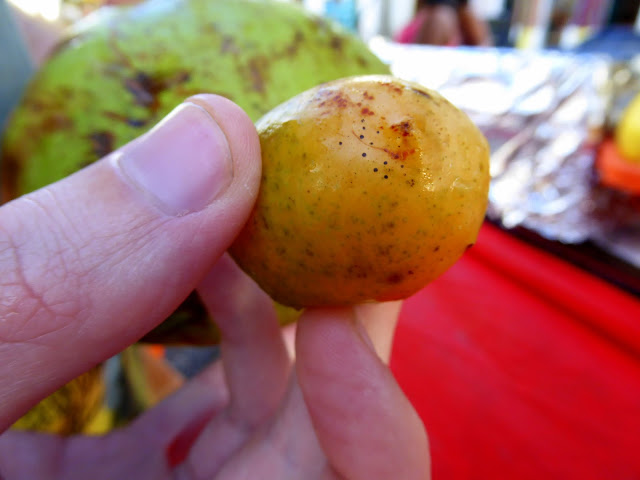 Next up is possibly the most controversial fruit we encountered - Cupuaçu. It's the things in the photo below that aren't bananas. After several tries, I decided that I definitely do not like it, whereas David is still torn. We had it as juice, in chocolate, as a kind of jam and as ice cream. Without sugar it is truly disgusting and with it...well I think it's probably the Marmite of the fruit world.

This was the first really weird fruit we tried in Brazil and as disgusting as it was (we made the error of not asking for sugar!), it didn't put us off. After that, we tried as many different fruits as we could and they almost all came in the form of juices. 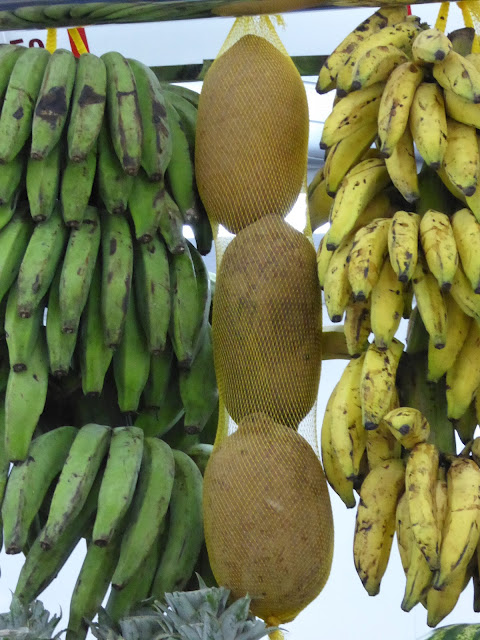 This is acerola, which we saw translated on menus as "Barbados cherry"...whatever that is! This fruit is very high in vitamin C and has an extremely sour flavour. It is often combined with other juices, usually orange, and we even had it in a caipirinha once. It has a stone in the middle and a texture somewhere between a cherry and a grape. 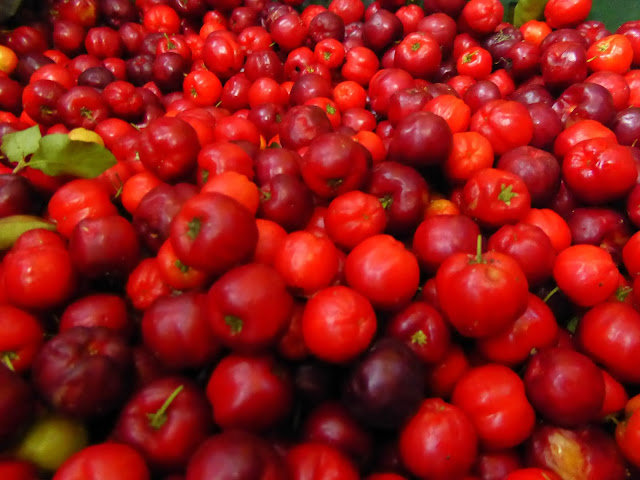 This is a bottle of suco de caju - cashew juice. Here is has been made into a fizzy drink but it is usually served as a normal fruit juice. If you have never considered where cashew nuts come from, I suggest googling it - it's fascinating! The juice tastes a bit like cloudy apple juice, with a subtle nutty aftertaste. Quite nice really, but not something I'll miss. 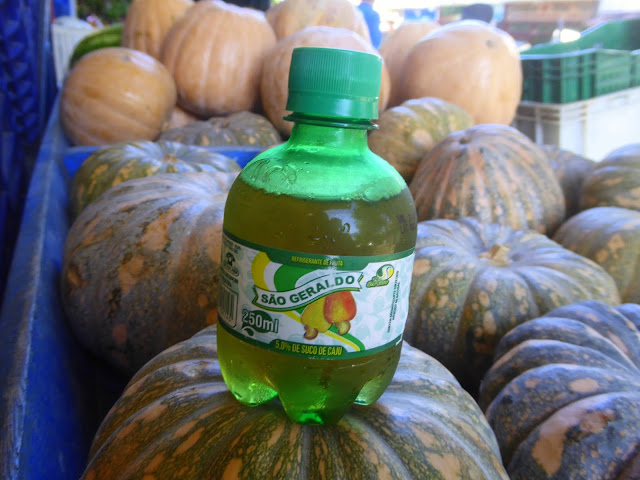 One of our favourite places to get juice was Bibi Suco - a relatively healthy restaurant that served juices made from frozen pulps. We probably liked them so much because they were a bit like a slushy and full of sugar! Below you can see blackberry on the right, which tasted just like a coulis! And on the left is caja, another Amazonian fruit containing a lot of vitamin C. The fruit itself looks like a small mango and tastes very sour and "tropical" - similar to a mixture of orange and mango really. It became one of David's favourites and I think he does miss this one. 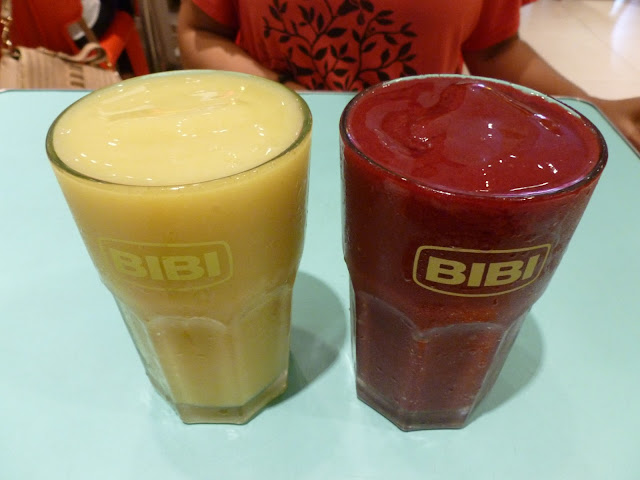 Other juices we tried were watermelon (my favourite), pineapple and mint, tamarind, mango, strawberry, custard apple, and Dave's absolute favourite, graviola. Someone recently pointed out to me that graviola juice can be bought here - Rubicon make it and call it guanabana. Having tried it at least a dozen times, the best we can come up with is to describe the flavour as a bit like pineapple, or just generic "tropical" flavour. It's white in colour with quite a thick consistency and makes an amazing ice cream.

Finally, I'll leave you with this photo. Some of these fruits you'll be familiar with but there might be some you don't know. Starting at the top left and working clockwise we have: honeydew melon; papaya; more melon; passion fruit (yes they really are that big and yellow in Brazil! And they were by far our favourite fruit for caipirinhas); mango; guava; bananas. 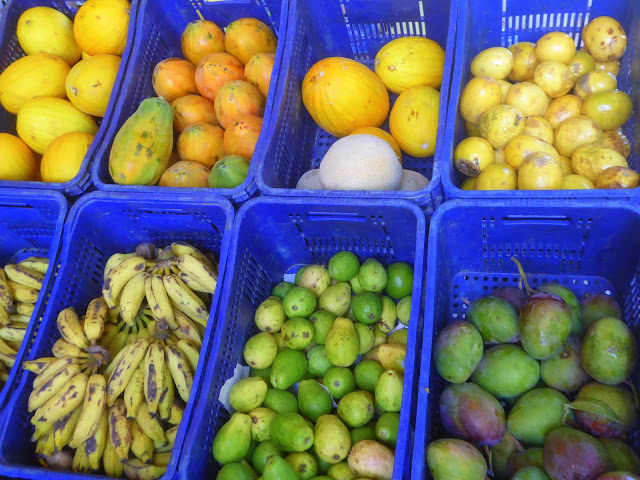