Pai In the Sky With Diamonds

It’s official, we’re in our last new place of this trip – Pai. We went from Bangkok to Chiang Mai, staying there for a few days, then moved on to Pai, returning to Chiang Mai once we were done. The 130km journey is incredible, incorporating around 600 turns through the mountains, but it's not great for anyone who gets travel sick. It takes over three hours by minibus but the stunning views provide ample entertainment.
Pai is a tourist town where there are more white faces than Asian ones, and it is about as touristy as a place can be. This can often cause a place to become a bit too much and the locals a bit pushy (Hanoi, Hoi An, Khao San Road, Bali, etc) but when it is done just right, it is delightful. And just like Luang Prabang, the atmosphere in Pai is just right. I’d go as far as to say that Luang Prabang and Pai are my fave places in the final four countries (Vietnam, Laos, Cambodia, Thailand). I would be inclined to agree...although out of principle I don't like to agree with David too often.

Now armed with a bit more spending power, in the form of Felipe and the joy of triple rooms, we stayed in the new Sylvana Pai Hotel. Run by a young couple, this hotel was a friendly and fantastic place to stay, and arguably the best place of our entire trip, and not just because of the massive all you can eat buffet breakfast! The room was really big, clean and well decorated. 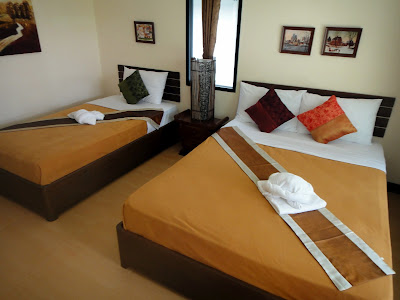 Another bonus of the hotel were the free tubes. After experiencing, as bystanders, the manic Vang Vieng, we were delighted to try tubing in the calm, shallow waters around Pai. The water was so low at times that we did hit our bottoms!
The first night we bumped into Portia, a lovely English lass who has also taught English in Korea. We first met Portia on a ferry to Japan 5 months ago, and had spent the evening getting drunk with her and her boyfriend. Since that faithful night, we have accidently bumped into her (unless she is secretly stalking the famous blogging duo) in Kyoto (Japan), Manila (Philippines), and when we were roadside after our jeepney had broken down in Palawan. After four chance encounters, we decided to add each other on facebook and discovered she was two days behind us on Borneo - we feared that we would never see her again… But there she was in Pai.

The four of us (SobCoe, Felipe and Portia) had two full days on two motorbikes, exploring Pai’s surroundings, with the first day spent seeing underwhelming waterfalls. 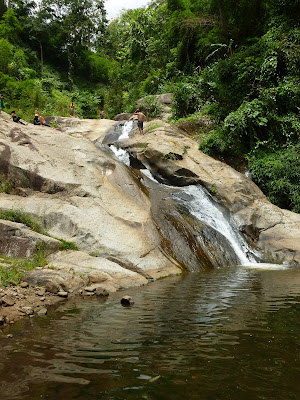 The second day involved another extraordinary journey on bikes, up and down a mountain, encompassing around 400 twists and turns, and eventually arriving at Lod Cave. Well that was the plan, but mine and Katie’s bike was a little older and struggled to climb the mountain. Worried we wouldn’t be able to both continue, we stopped and Katie offered to stay at the mountain-top viewpoint. When we did arrive at the cave, I realised that I couldn’t experience this without Katie by my side and so took Fel’s better bike back to get Katie – adding an extra hour and half of riding around these lush hills – what a shame!
When we finally arrived at Lod Cave, we paid for the bamboo raft return trip around all four sections. The cave was huge and very interesting - you can trust our judgement as we became caveoisseurs in Mulu, Borneo. I would argue that this cave tour was more interesting than Sabang (one of the new seven wonders) because of the lack of people and the run downness – it was more of an adventure.
One section was covered in bat poo (guano) and we all ended up feeling quite grimy but also adventury. 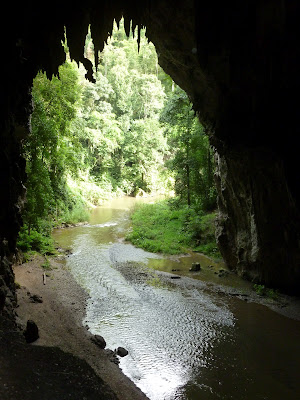 After three wonderful days and nights in Pai, we begrudgingly left for Chiang Mai to do some last minute shopping before returning home. We left firm in the knowledge that we would return – Pai is a place where I could spend a month, perhaps learning Muay Thai while Katie yoga’d.
Goodbye for now Pai.

Email ThisBlogThis!Share to TwitterShare to FacebookShare to Pinterest
Labels: Spain, In My Mouth, Weird and Wonderful Pai, SE Asia, Thailand

Ping Pong...Please Not In My Mouth!

What can be written about Bangkok that hasn’t already been written? Well hopefully this story will keep you entertained. We arrived in the evening, 12 hours after leaving Siem Reap, and met Fel – a good friend from Uni that we haven’t seen for two years. Fel had just arrived in Asia for the first time and so added some much needed enthusiasm to our withered travelling souls. Besides a 12 hour layover in Malaysia, Thailand represents the last country on our 17 month adventure. We met this realisation in a state of general excitement about seeing friends and family, but with an undercurrent of anxiety towards the future and our prospects. Whenever one is excited, anxious, or feeling whatever really, lots of large Chang beers make it all better…Until the next morning. 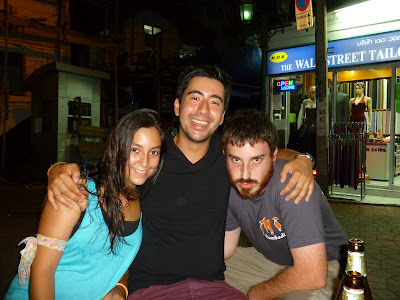 With stinking Changovers we tried to survive by getting the essentials – food, water, and a massage of course. We started getting massages in Laos and since then, we’ve had one every few days. They are sublime and silly cheap ($4-$7).

That night we went to the infamous Ping Pong show. It was the second time I had been and I am now very concerned that my mind is significantly more desensitised than 3 years ago. No person should be unphased by what you see but that was the situation for me. Katie, on the other hand was extremely impressed by what she saw, and cheered the girls on if their “tricks” weren’t going to plan.

I would go into specifics about the content of the show, but our parents are loyal readers and I don’t want to creep them out too much. Besides, the excitement of a Ping Pong show is the mystery of the unknown. I will just say that Fel ended up holding 10 meters of damp ribbon at one point. As a side-note, there are two Ping Pong shows in Bangkok, and I’ve been to the same one twice, which is a great shame because otherwise I could have made a SobCoe table to compare them.

Besides that, we also went to Chatuchak Weekend market, which was so large and overwhelming that the experience wasn’t too pleasant - and you know how much we love markets! The size of this market is utterly ridiculous – we walked for hours and saw less than half. No wonder 200,000 people visit each weekend.
Fel and Katie left that night to Chiang Mai because they were Bangkok’d out and wanted to move on. As my life is governed by sporting events, I stayed to watch the Wimbledon Final – great match and I adore the Fed so it was a joy to watch. Being in a bar full of ladyboys on Khao San Road did make the experience a little stranger and certainly more memorable than other Wimbledon finals. The game finished just after midnight and I wandered about using the remainder of the evening to fully review the other Ping Pong show. Stay tuned…
I didn’t really go but now I wish I had, for journalistic purposes only. I promise.

Email ThisBlogThis!Share to TwitterShare to FacebookShare to Pinterest
Labels: Spain, In My Mouth, Weird and Wonderful Bangkok, SE Asia, Thailand

Cambodia In My Mouth

Email ThisBlogThis!Share to TwitterShare to FacebookShare to Pinterest
Labels: Spain, In My Mouth, Weird and Wonderful Cambodia, Food and Drink 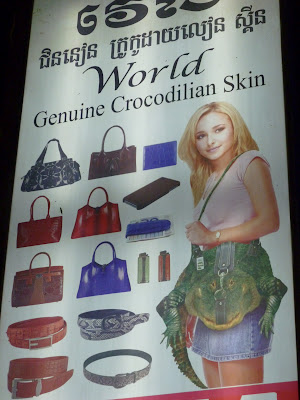