Siem Reap is a delightful Cambodian city full of nice restaurants and fancy hotels. It is frequently frequented by tourists, as it is home to Angkor – an ancient temple complex built by the Khmer civilisation between 800 CE and 1400 CE. The Khmer, not to be confused with the genocidal Khmer Rouge, controlled a large part of what is now Cambodia, Thailand, Vietnam, and Laos. They left behind a legacy of magnificent stone temples, which were built for their kings, in the capital of their kingdom – Siem Reap.

We did the standard tuk-tuk tour of the temple complex, which started with seeing sunrise over Angkor Wat. Unfortunately the cloud gods were against us and the sun wasn’t visible. It was still worthwhile though as we got a head start on the ever increasing temperature of the day. 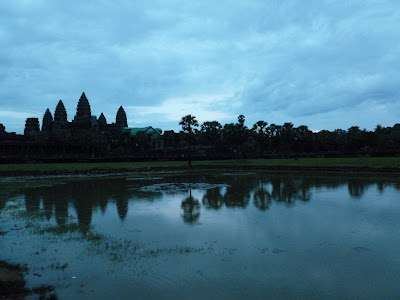 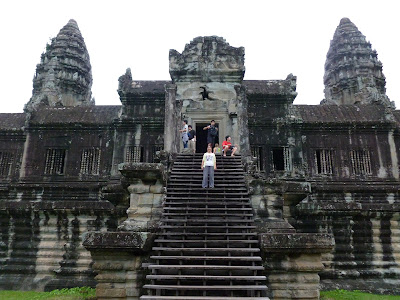 Angkor Wat is the trademark temple because it is one of the biggest and the grandest from afar (when there isn’t scaffolding.) It floats on a body of water that is kept filled by a nearby man-made reservoir and connecting river. What a feat of engineering. Each temple was designed and built in under 60 years – cathedrals in Europe took 200 years during this period, and are significantly smaller.

What has always struck me about Angkor is the size of the complex – it is just huge, dwarfing every other temple complex we have been to. We next visited our favourite temple of the day – Bayon. The face carvings are so detailed and it is really freaky how many faces you see when staring at it. 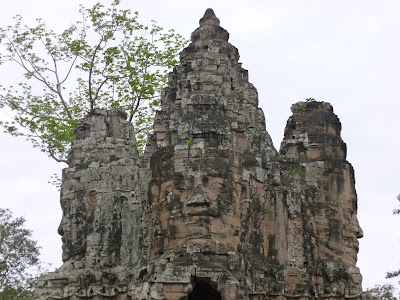 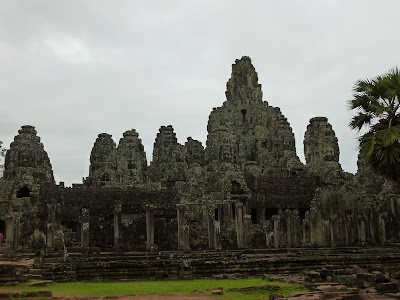 Around Bayon are a couple of other smaller, pretty temples that are mostly in ruins. There is also a nearby wall of rock carvings known as the Elephant Terrace – this was quite long and very impressive. 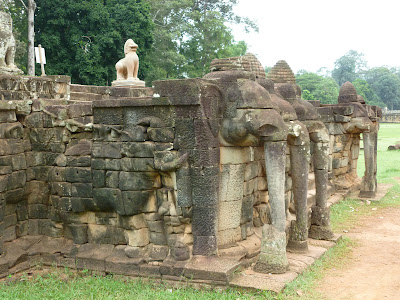 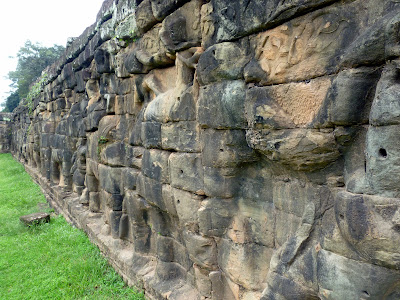 The next temple is known as the Tomb Raider temple (real name: Ta Prohm) because part of the film was shot there. The temple is fascinating because parts have been engulfed by huge trees and their roots. It was a much grander version of the tree house in Taiwan (Here). Another reason this is so very interesting is because every nook and cranny is different. Therefore exploring the temple in its entirety is very rewarding. 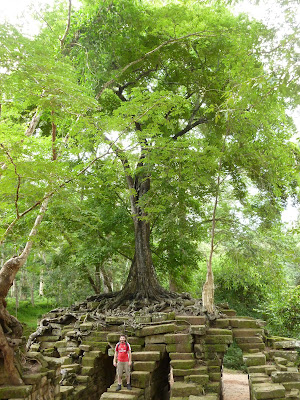 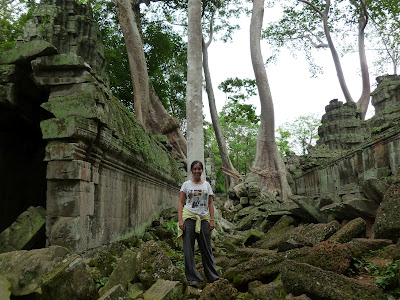 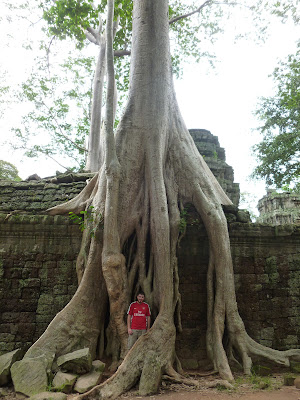 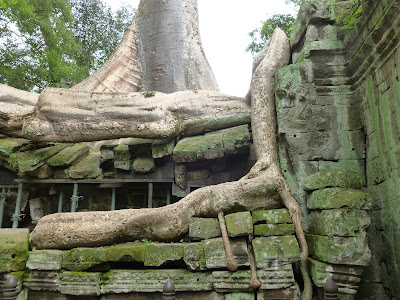 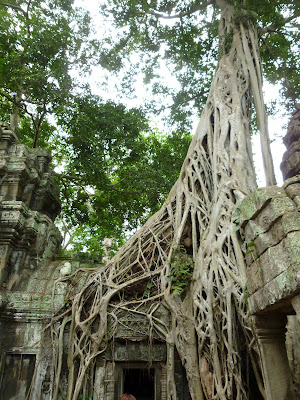 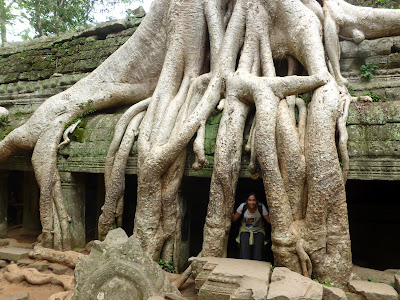 We saw, but didn’t climb the steep temple because of Katie’s fear of heights and my not having been that impressed by it last time. We did do one more temple that was a little different from the standard tour – the sunset temple. It started pouring down though so we didn’t spent too long there, but we did get a good view of Angkor Wat.
The rest of our time in Siem Reap was spent eating, wandering aimlessly, and visiting the night market. The night market was quite upscale and both of us kind of felt a little marketed out by this point. We didn't indulge in the $1 hour-long massages that were on offer every few meters, but maybe our scepticism was misplaced. Still, $1?!

We left Siem Reap and Cambodia after experiencing the visual delight of Angkor. We had spent two weeks in Cambodia and it had been wonderful. The markets in Phnom Penh, the beach in Sihanoukville and the ruins in Siem Reap had all given us a lovely impression of the country. I realised that I would be happy to return to Cambodia for a third time, one day.