Arriving in Phnom Penh, I was conscious of how Dave had described it after his last trip there. I was expecting it to be very seedy with little nightlife to speak of. We shared a tuk-tuk from the bus station to the guesthouse with three British girls, and I arranged to join them the next day, so we could all go sightseeing together.The tuk-tuk ride hinted at this seedy element, but all in all it just seemed like any city really.

Sightseeing in Phnom Penh is depressing, to say the least. There are probably a few temples to see, but the main “attraction” is the Choeung Ek killing field. This old Chinese cemetery is the most famous of the killing fields in Cambodia, where the Khmer Rouge executed around 17,000 people between 1975 and 1979. At Choeung Ek, mass graves containing 8,895 bodies have been discovered and the area has been turned into a historical tourist site, honouring the dead with a huge monument, and educating visitors about the atrocities that occurred there.

We were given an excellent audio guide, which talked in detail about each area of significance and included a few case studies and personal accounts from people who were tormented by the Khmer Rouge. I don’t really want to go into much detail about the site, because it’s pretty grim and anyone who is interested can find tons of information about it online. The basic gist though is that the Khmer Rouge was a regime led by Pol Pot, who decided everyone should be farmers, and anyone considered to be intelligent (i.e. could speak a foreign language, wore glasses or had a skilled job) was killed. 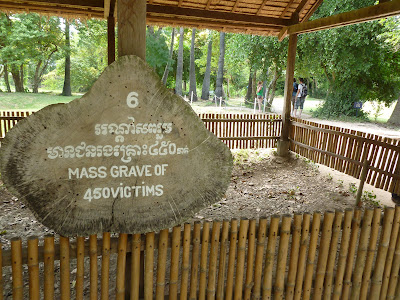 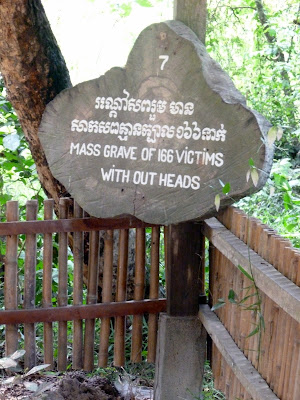 The information at Choeung Ek was brilliantly presented, both on plaques and in the audio guide, and the gravity of the events really hit home while I walked around the beautifully green park-like area.
After the field, we went to S-21; a high school that was turned into a prison camp by the Khmer Rouge. There wasn’t much information and it was a bit unclear as to the root we were supposed to take around the buildings, but seeing all of those tiny cells, some of which still had evidence of violence inside, and hundreds of mug-shots of the prisoners, soon got a bit much for us, and we headed back to the guest house.

By the way, the Khmer Rouge was trained by the British SAS, with the help of Washington, so they could drive the Vietnamese troops out of Cambodia. They were trained in how to use landmines, which remain a huge problem in Cambodia today. How delightful that Britain is partly responsible for the genocide of around 2 million people – at least a quarter of the Cambodian population at the time.

Dave didn’t come on this trip, as he had already visited the sites during his last trip and I can completely understand why he wouldn’t want to return. It was a very informative day and I think it’s a very important thing for people to be aware of, but it’s by no means fun.

We didn’t do much else in Phnom Penh, except go to the cinema and visit the markets. Dave had said the markets were the saving grace of the city and I completely agree. The Russian market was one of the best markets we’ve been to and we bought a fair bit of tat. Then we headed to Central Market, where Dave bought a shocking number of “designer” polo shirts. Finally, we popped into the night market and Dave was at it again! This time, legitimate “fallen off the back of a van” Abercrombie & Fitch shorts. There are a lot of designer factories in Cambodia, so often the labels in the markets are actually genuine. We now refer to these items as Genuine Fakes.
Anyway, that was it for Phnom Penh. Walking round at night, I did see quite a lot of bars full of women that seemed a bit suspicious, but it didn’t feel as seedy as I expected. However, with sex tourism being a huge problem in Cambodia, I was very aware that a lot of these women might have been prostitutes.