After the epic bus ride, would Phonsavan be worth it? Hells yes it was! As soon as we stepped off the bus we found a super restaurant / bar run by a Scot named Mark (or was it a Mark named Scot?). Mark was very friendly, helping us find an ATM, hotel, and an idea of what to see. The restaurant is called Bamboozle – the food is well priced and excellently delicious, especially their chicken sandwiches. He was so helpful, I hope someone reads this and goes there – tell Mark that “Blog of the Morning Calm” sent you.

Phonsavan is an interesting place to kill a few days, as there is the wonderful Plain of Jars – over 70 sites containing thousands of clay pots. No-one is quite sure what they were made for, but they have sat there for up to 2500 years. The locals believe they were used to make alcohol but archaeologists believe they were originally used as burial urns. There are three main sites open for tourists – the rest will open when they are cleared of bombs (more on that later).
We met a German called Stefan and we tried to negotiate a good price with some tour companies. However everywhere quoted us around $17 per person, which is a right rip off – tour companies are not up to much in Laos. We ended up doing my preferred choice – we rented motorbikes and took them to site one to explore. Site one is the biggest, closest, and most spectacular site (from what we heard) so we only went to this one. 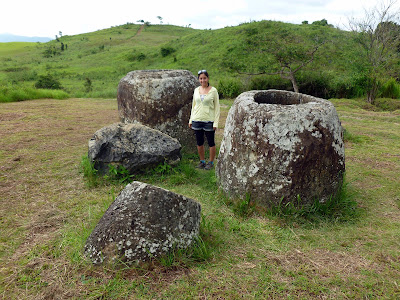 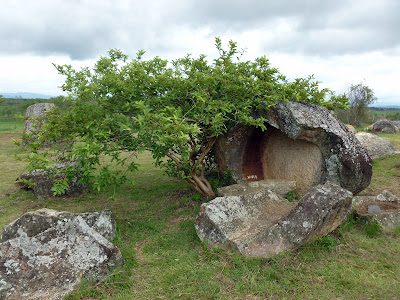 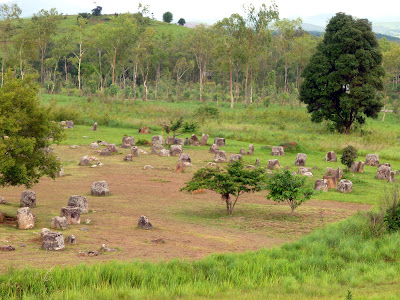 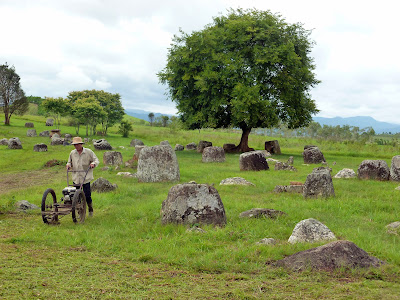 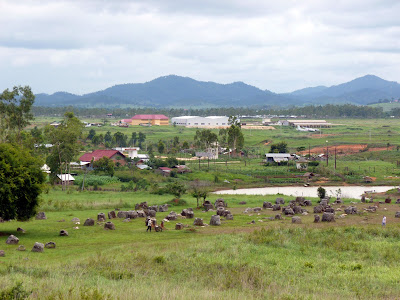 It was pretty amazing and I really felt like Indiana Jones when looking around these ancient pots. Only kidding, for once I just felt like myself, otherwise I’d be getting worried I was turning into Harrison Ford. I’m fairly convinced they were originally used as brewing tools for Lao Lao (whiskey) and then later became urns for ashes. 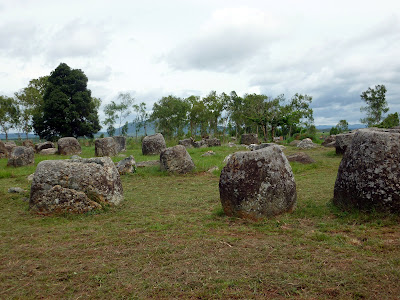 After the thoroughly entertaining Plain of Jars we went on a long bike ride to a Hmong Village, and a site with lots of bomb craters. None of them were particularly big, but the “Craterscape” was both interesting and upsetting.

The Hmong village is famous for something quite odd – using old bomb parts as a building material. 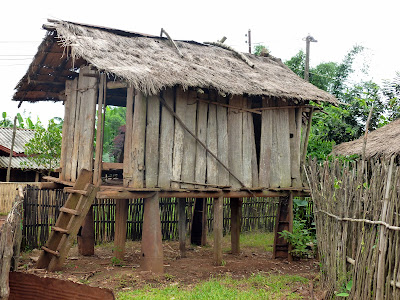 It wasn’t as touristy as we expected – they generally just used the material for construction. Anyway, I bet you’re wondering what’s with all these bomb craters and bombs? There wasn’t a recent war in Laos, was there? Well there was, but you won’t read about it in many history books. It is known as the “secret war” and it was carried out by… you guessed it, our favourite warmongers, the Americans.

Not satisfied with dropping bombs on Vietnam, they concurrently bombed Laos, which was neutral during the “American War”. They did this for two reasons.
1. Vietnamese troops moved through Laos on what is known as the Ho Chi Min Trail.
2. American Pilots did not think it was safe to land with un-dropped bombs (which was an issue in bad weather) so would empty them over Laos rather than land with bombs and risk blowing up.
I know. That second reason is mad right? Remember, Laos was neutral in the war.

The 9 years of bombing makes Laos the most bombed country in the world per capita. 0.833 metric tonnes of explosives were dropped for every person in the country. It actually averages out at more than 2 metric tonnes for each person who was living in the heavily bombed zones. More bombs were dropped on Laos, in a war American citizens didn’t even know about, than on Germany and Japan combined in WWII. On average, a bomb was dropped on Laos every 8 minutes. For 9 years.


New modern warfare techniques lead to cluster bombs being used. Around 30% of these failed to explode, for various technical reasons, and now lie around in fields waiting for a sharp impact from a shovel, which will cause them to explode. Since this illegal and secret war has ended, over 30,000 people have been killed by unexploded ornaments (UXOs) – the Laos population is around six million. It is a massive and ongoing problem and has really hindered the development of Laos, as the people are unable to use land for farming until it is cleared. Even worse, people often farm the land anyway and suffer horrendous consequences. It is worth noting that less than 1% of these people were killed by Vietnamese laid landmines – a low percentage mainly because mimes maim, whereas UXOs kill.

Laos is one of the poorest countries in the world and without tourism would be even more lost. These UXOs, locally called “Bombies”, kill hundreds of children every year, even with the help of charities such as MAG. 40% of all UXO related deaths have been children.

Another anti-american / war fact is that the CIA paid the local tribes to produce opium so they could sell this addictive drug to help finance the war (this is in the 1970s). Opium addiction is a big problem in Asia, another legacy of the British who started the Opium Wars. I remember reading that in Afghanistan, heroin production has more than tripled since the Taliban were “defeated”. Is the CIA at it again?

The American government has been pretty callous and stingy in its efforts to help the Laotians, with individuals and NGOs doing most of the leg work. We learnt all this information about the secret war in the museums located on the main road of town – there was a very informative and well produced hour-long documentary.

Cluster bombs are known to leave UXOs when used so you’d think they’d be illegal, right? Oh no, the Brits used them in the Falklands and NATO used them in Kosovo (even when it was about getting people back to their homes!). They have been used in lots of recent wars. The western war machine keeps growing stronger and unless people stay informed and oppose conflicts, the poorest people will continue to suffer the worst.