We had planned to go to a little town called Pakse to break up the journey to the 4000 Islands, and we were going to rent a bike to discover the local scenic beauty. But when we arrived, it was hammering it down so we continued on our way down to the 4000 Islands. When we reached the port to catch a boat to Don Det, the rain had gotten heavier. We hurriedly bought a boat ticket and took the oldest, ricketiest boat in existence. 6 different buses, 1 boat, and 25 hours after leaving Vang Vieng, we arrived in Don Det – one of 4000 islands in the Mekong river, in southern Laos.

We looked for some decent accommodation on Don Det and were surprised by the lack of options available. There were incredibly cheap riverside bungalows for £3 a night that had a shared bathroom, and were a little greasy. So we paid a fair bit more for a little more luxury. Luxury such as a bathroom with a hole in the roof, a manual flush toilet, and a sink which wasn’t plumbed in and just spilt all over the floor.

We spent two days trying to work out why people flock here and stay for weeks. To us it just looked like a chilled out, hassle-free, but very muddy area, where people just get stoned and watch films all day. We were far from impressed.

After 3 days though, the sun came out and Don Det began to grow on us… The effect a muddy path had on our perception was surprising. We spent a day cycling (20-25km) around another island called Don Khong, which is connected by a bridge. We saw an incredibly ferocious waterfall. 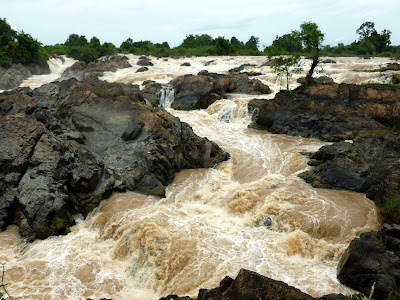 We also went searching for the elusive and endangered Irrawaddy dolphins, which you can apparently see from a viewing spot, but our lack of binoculars meant it was impossible.

After another day of doing nothing in Don Det, we realised that this was a fairly decent backpacker area. Don Det makes doing nothing fashionable and it is a great place to relax without any hassle, in a cheap environment. That said, the lack of comfort, sun, and decent accommodation was enough to make us move on. 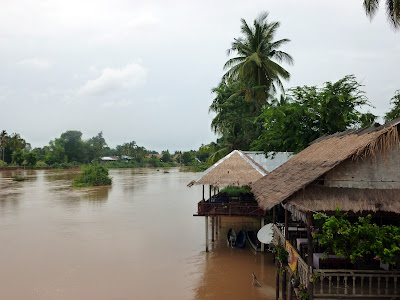