Food, flowers, booze, mountains, rivers, music, nature – it seems to me that every weekend Busan hosts a different festival to celebrate…well pretty much anything you can think of. We’ve experienced quite a few since moving to and this blog will give you some idea as to what they were all about.
First up we have the Suyeong Flower Festival. This was a very simple festival held in a small park by the river Suyeong. There wasn’t much going on in the way of entertainment while we were there but we did get some lovely photos of the arrangements that had been created in the grounds so here are my favourites: 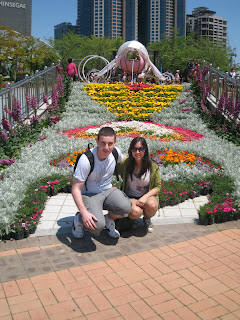 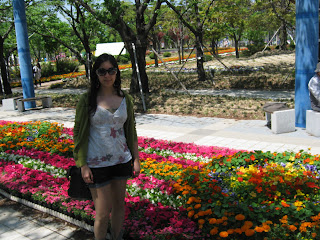 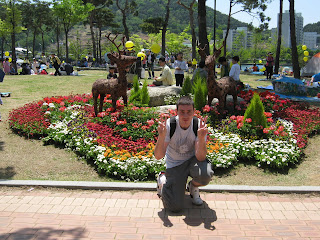 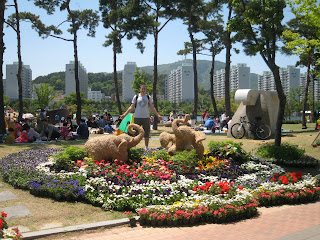 A couple of weeks later we attended a Makeolli Festival. For those of you who don’t know, Makeolli (with a variety of different Romanised spellings) is a traditional Korean drink made from rice. It’s usually around 8% and has a pleasant, but quite yeasty taste. It also comes in many flavours, of which mango is obviously the best. Anyway, it took quite a while to get to the festival site and I have to say it wasn’t that great – hardly any free samples and again, not much going on. However, we did eat some scrummy pajeon (a Korean spring onion pancake which I have learnt to make) and had a rather bizarre experience involving some traditional dancers and drummers. We had only been on the festival site for about 2 minutes when we were surrounded by about 15 people playing very loud instruments, wearing strange costumes and dancing round the two of us while 150 Koreans pointed and laughed at us silly foreigners. 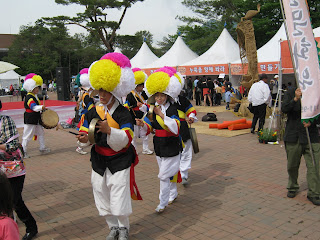 We danced with them while they circled around us and the whole thing went on for over 4 minutes before they let us go! I know it was this long because Dave made a video of most of it, which we will upload in a later blog.
After we got bored of the festival we moved on to a different part of the city, famous for housing a big university and thus lots of places to drink and party. There was a connected event going on here – a makeolli street party. We were given lots of free cups of makeolli, served out of a petrol canister, and we danced the night away under the stars to live music including, amazingly, some drum’n’bass! 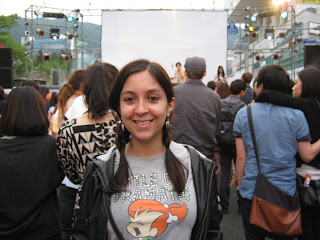 The final festival in this post is perhaps best explained with pictures so I will keep the words to a minimum. It was the Haeundae Sand Festival – a festival of sand, held on Haeundae beach. Nuff said.

We have loads more pictures but I had to be discerning and just choose my faves. Anyway, it was dead good!
I'm sure one day we will catch up with the blogs but we're off to China in a couple of days and have had quite a few adventures the last couple of weeks with my family so it'll be a while until we're up to date, sorry!

One weekend not too long ago, we took the bold step of hiking Jangsan mountain. I say bold because in June, the humidity is so high, it makes everyone look like the guy from Airplane!
It's also bold because of all the dangers that are present when hiking. Luckily there were some helpful posters that probably saved our lives.
We went with our Canadian friend Tom and a Korean student called Jay. It was a fun, sweaty few hours trying to find the peak but instead coming across restaurants, military bases and minefields. 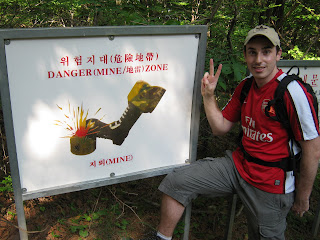 Towards the top, we started to struggle and began feeling as though our legs were on fire, much like London circa 1666...or 2011. But the leg pain was worth it, as when we reached the top we were greeted with the most spectacular views. Photos cannot do it justice, but here are some anyway. 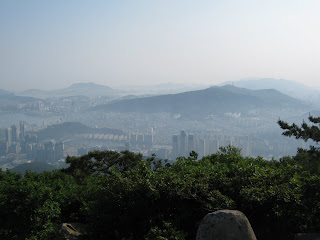 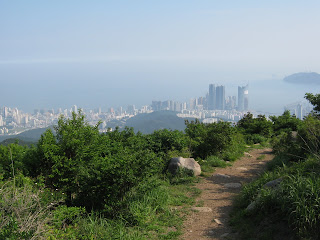 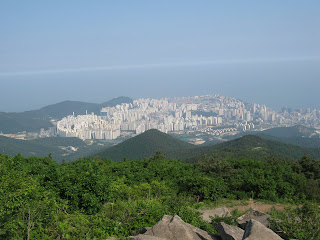 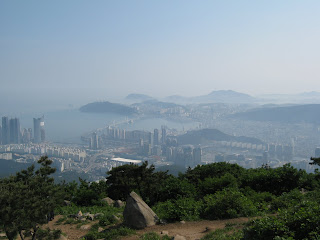 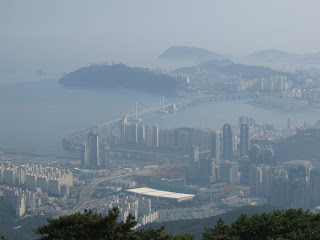 Yes we are both still alive despite America’s best attempts at bankrupting the World... We have been so busy gallivanting around Korea as well as entertaining Katie’s family, who are now in Japan, that we have not had time to write a blog detailing all our adventures. However I have managed to find time to write down my musings whilst having lunch on my own so here goes.
Well I am writing this sitting in a restaurant using an old fashioned pen, writing on some old fashioned paper so screw you trees. About 20 minutes ago, I was hungrier than a hippo so I went into a restaurant and was handed a nice picture menu – always handy when you are dizzy from hunger. Even with pictures, you can never be too sure so I got out the old mobile and started translating away. The first thing that looked tasty translated as, “starving, exhausted from malnutrition.” I stared at the screen in disbelief as it is quite rare for a menu item to mock me in my times of need. My glucose deprived mind floats back to a time when Katie translated a dish as “chicken shit house”. We thought “chicken shit house” must mean chicken arse so we opted out. Call us old fashioned but if arses were supposed to be eaten, they wouldn’t taste like shit.
Anyway I ended up playing food bingo and risked it on a picture without translating for fear of further bullying from the menu. Thirty seconds after I started eating, the manager came over and offered me a free side order because she liked the cut of my jib. I mean you should get some deep fried king prawns when you spend £5 on what turns out to be delicious chicken, onions and rice - I'd be angry if I didn't!

There are some activities you should do on your own, such as showering, going to the toilet, murder, but eating on your own is about as unusual as a pube-free urinal. However, similar to going to the toilet on your own, eating on your own has a major benefit – people watching. Seeing the culinary delights and frights that people order in Korea is always fascinating. Something quite odd, which is considered perfectly normal here, is a customer handing over their mobile phone and universal charger “adapter thingy” to have their phone charged while they eat. I don’t know why they bother; you are given 2 batteries when you buy a phone here. Reminds me of an article I just read on people getting treated for internet addiction in Korea. (http://www.bbc.co.uk/news/world-asia-pacific-14361420) I mean, it’s a little crazy but I can’t talk because it’s like the pot calling the kettle a kitchen utensil. Also according to a study, Korea could have 48 million smart phone users by 2015 and its current population is only 50 million. That can’t be true, can it?
Anyway back to the restaurant and if eating on my own wasn’t social suicide already, I tightened the noose further and ordered a nice cold beer. I was in no rush and enjoyed a chilled air conditioned lunch before venturing outside into the steam room that is Korea in August.
Katie’s family are back in Busan next week and then we go to China for 15 nights pretty soon so there may not be time for another blog this month.
Oh and thanks a lot to the Moss family for providing me with enough sweets to rot all my teeth :Ð