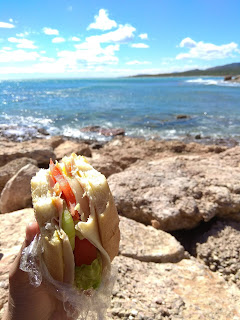 Blimey, 2018 flew by in a flash! We've had quite a busy year, but we definitely slowed down enough to eat some pretty tasty things from time to time.

We did a bit of a foodie trip in the north of Spain in October, for which I have written a separate Green Spain In My Mouth post because there was quite a lot to say about what we ate! But here are the highlights from the rest of the year. Bon appetite!

My first shout-out in this post is to all of the packed lunches we've eaten this year. When we go on road trips, we tend to take food with us so we don't have to take time out of the trip to find a restaurant. And our sandwiches are usually accompanied by spectacular views like the one to the right.

This year I turned 30 and have been taking full advantage of one of the biggest perks of being an adult - you don't have to wait until the end of a meal to have dessert! So in honour of this wonderful realisation, I'm going to present you with some delightfully decadent dishes before we move on to the mains.

Above is a lovely selection of indulgences we've enjoyed this year. On the left we have a classic crepe with nutella and a mountain of squirty cream, which we enjoyed late one evening in Tarragona. In the middle is a slice of turron ice cream, which was incredibly sweet and nutty, and came as part of a menu del dia that we had in Cambrils, on our way back from Tarragona. And finally we have an unexpectedly large and elaborate ice cream sundae, which we enjoyed in our favourite coastal town of Peñíscola. 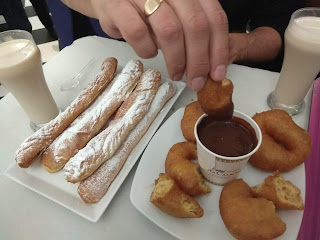 Horchata is a drink found in several countries, but it is said to have originated in Valencia. In Mexico, it's made with rice milk, but the original Valencian recipe uses chufas - a nut-like tuber also known as a tigernut.
When surveyed, almost all of our visitors last year said they quite liked horchata, but it was too sweet for most and that's the main thing that puts me off it too, to be honest. It has a very unique flavour that I have not yet figured out how to describe, but it's definitely refreshing and worth trying if you get the chance.

Horchata is best served chilled, and sometimes comes in a slushie or even ice cream form too. Valencians love it, especially in the summer, when it is a popular breakfast drink.

And when ordering horchata in a cafe, or specialist horchateria, make sure you also get a couple of fartons to go with it. These are long, thin sticks of light and airy dough, dusted in plenty of icing sugar. Beside the hilarious name, fartons aren't anything special on their own, but they are perfect for dunking in horchata, as they soak it up like a sponge!

And finally we have the buñuelos. These are fritters made from a dough that's been blended with pumpkin, and they are incredibly popular during Las Fallas. Just like churros, they are coated in sugar and served with a cup of thick, hot chocolate for dunking. The pumpkin gives the dough an orangey colour, but doesn't add much of a flavour, from what I can tell. Being deep-fried, they are a pretty heavy snack, but if you like churros, give them a go! 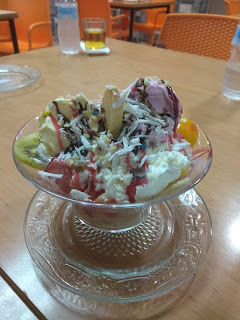 Finally, not so much a sweet treat as a sweet enigma. We live close to a Colombian restaurant that serves huge portions of really hearty, unhealthy food. We had some friends visiting and decided to eat there one evening because they were showing a World Cup match that the boys wanted to watch.

Anyway, for dessert we got one of their ice cream sundaes that apparently came with queso fresco (fresh cheese), which was somewhat intriguing. Well, as you can see we got a nice bowl of vanilla and strawberry ice cream, with some fresh fruit, sauces and grated coconut. But that's not cream you can see at the front. It's cottage cheese! It wasn't bad, but added a kind of blandness to the whole dish that was slightly confusing. Dave was pleased with the extra protein boost though!

This section is going to be a bit shorter, since it's not really my area of expertise. But here are some photos of some of the seafood we've (Dave's) eaten this year: 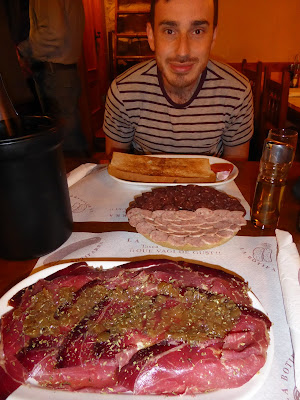 Next are some delicious things we ate in Tarragona. We went to a restaurant called La Botifarra, which specialises in toast! Imagine if you cut a loaf of bread long-ways to get a really long slice. That's what we were given. Sensing our bemusement, the lovely waitress explained what to do. First, you rub garlic on the toast to impart flavour. Dave decided to smush the whole clove in, giving it a nice spicy kick. Then you do the same with half a tomato. Add a generous drizzle of olive oil and you've got yourself a popular breakfast dish called pan con tomate. But we needed something more substantial, so we topped out toast with slices of a Catalonian sausage called botifarra, which came in both a white and a black variety. It had a very soft texture and didn't taste like much to me, but I really enjoyed the DIY nature of the meal! We also got a toast that was pre-topped with jamon and pesto; a really tasty combo.

Below is a cheeky little evening snack we had in one of Tarragona's beautiful squares. We got a bottle of house white, some pan con tomate, and a plate of pimientos de padron. They look like chillies but have no heat whatsoever, just the bitterness of a green bell pepper, a slightly charred flavour from being deep fried, and an addictive amount of salt. You can find them all over Spain and are one of the best ways to get some vitamins with your drinks!

We were going to be restrained and just have these two things, but then spotted a few people eating something out of a goblet that we couldn't resist! They were crunchy fried chicken strips, nestled in a glass of honey-mustard dip. Dave's not one to eat with his eyes (unless it's ice cream) but even he was mesmerised and didn't take any persuading to order them! 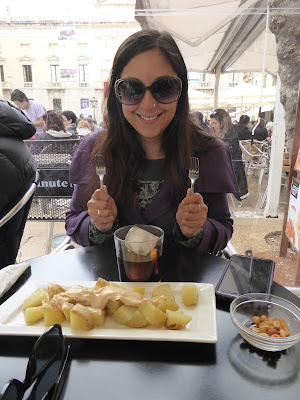 I'd like to say a few words about patatas bravas. This is probably the most well known and ubiquitous tapa. But we have experienced a huge variation in both the potato and sauce components. The potatoes can be roasted, fried or even boiled. Often they'll be bite-sized little chunks but we've seen huge ones, and some that were cut almost like crisps.

And then there's the sauce. Aioli (garlic mayo) is sometimes separate and sometimes mixed in with the red sauce. The red sauce can be ketchup or something homemade. Will you get both sauces or just one? But above all, what's the spice level? I have found this "bravas" (brave) element to the dish to be what varies the most.

Bravas is a dish you can count on as a staple carb in your tapas order, as long as you're not fussy about what you actually get! 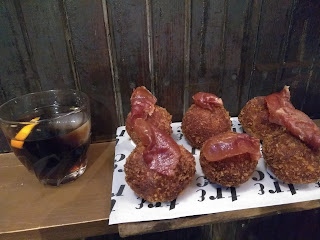 This next photo represents the best culinary experience I've had in Spain so far. A glass of homemade vermut and some croquetas de jamon. We have become big fans of vermut, which is like a subtly spiced mulled wine, served cold with a slice of orange and sometimes an olive. It's heavenly. And paired with the best croquetas I've ever had, this is pure perfection. I'm not going to tell you where to get these World's Best Croquetas - you'll have to come and visit us to find out! 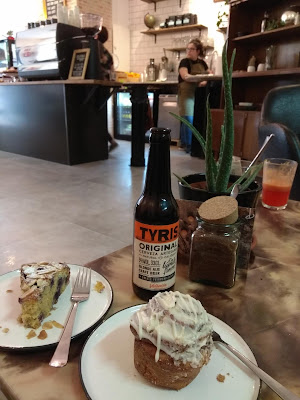 One of the first people we met when we arrived in Valencia was Romina. She's become a good friend of ours and in the spring, she and her Mum opened a bakery called Blackbird Café.

Romina is an incredible baker and we've been enjoying her cakes and pasteries all year. Below on the right you can see my absolute favourite cinnamon bun. Valencian bakeries just don't do cakes and pasteries like Romina, so it's quite unique in the city.

The coffee at Blackbird is really special too, and the baristas put a lot of thought into finding and selecting different beans each month. Oh and I have to mention Romina's Mum's caponata, which is incredible! If you're in Valencia, Blackbird is the perfect place for brunch or a snack. Excellent work Romina!


We haven't just been in Spain this year - we went to France for a week in the summer and ate pretty well there too! First there was Jen and Patrick's wedding, which was incredibly well catered and we ate like vegetarian royalty! Ottolenghi's garlic tart in the picture below (left) was a revelation.

Then we did a day trip to Dijon and tried a couple of interesting things. Snails, of course, and then an interesting take on boeuf bourguignon, with oeuf (eggs) rather than boeuf (beef). I don't know French food that well, or how this sauce is different to that of a coq au vin, but it was a very tasty dish with bacon and little shallots, and of course Dave was over the moon that it had eggs. It's just a shame we didn't order it, because we both had proper food envy! But thanks for letting us try it, Harry.

And that about does it. We have another year of exploring and tasting ahead of us and I'm sure we'll discover plenty more blogworthy dishes along the way. We already have a few trips lined up and there are plenty more in the pipeline! Come back soon to see what we've been up to and let me know in the comments what your standout meal of 2018 was!

Email ThisBlogThis!Share to TwitterShare to FacebookShare to Pinterest
Labels: Spain, In My Mouth, Weird and Wonderful Food, Food and Drink, In My Mouth, Spain 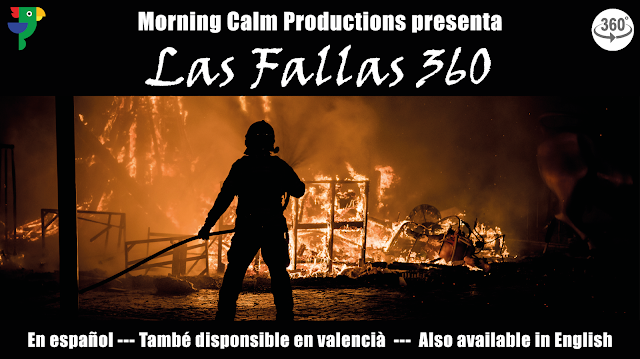 Today we are thrilled to be releasing our Las Fallas 360 Virtual Reality documentary in TWO MORE languages!

Available TODAY in Spanish and Valenciano, as well as English.

Now even more people can feel the passion of this unique and amazing cultural celebration!

We'd like to say a special thank you to Ana Mayordomo for her help translating the script and Aitane Bueno Sanz for the giving us her talent and her voice for the Spanish and Valenciano audio.

Now, put your headset on and enjoy!