Green Spain In My Mouth

This is a very food-filled time of year and it's been a while since I wrote a food post, so it seemed like the perfect opportunity. And this is going to be a good one! As we've mentioned, our trip to the north of Spain was along a bit of a foodie route, which I was very excited to discover! Anyway, I've kept you waiting long enough so let's chow down!

Also spelled pinchos, these tasty morsels are the traditional bar snack of northern Spain. What makes them different to tapas is the fact that they are usually skewered to a piece of bread with a toothpick.

They tend to cost somewhere between €1.50 and €3, depending on the ingredients and location. I imagine if you're used to it, this is a great way to have a little snack with a drink, but it was a real challenge for me, as some of the bars had so many on display and choosing was a nightmare because I wanted to try them all! Here's an example of the large selection at one of ten or so bars in Bilbao's food market...torture! 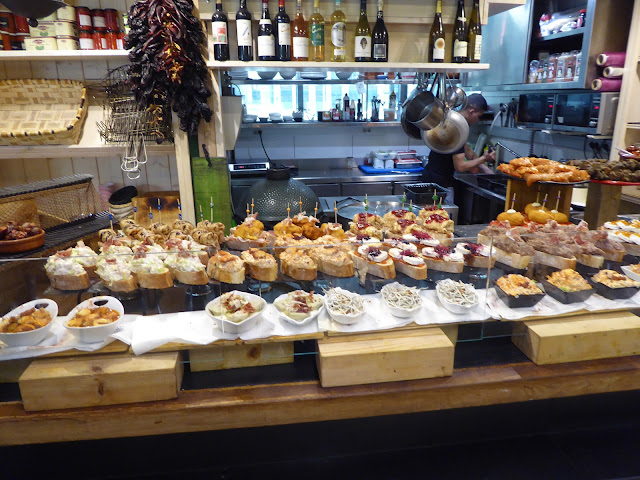 Below, left to right we have: 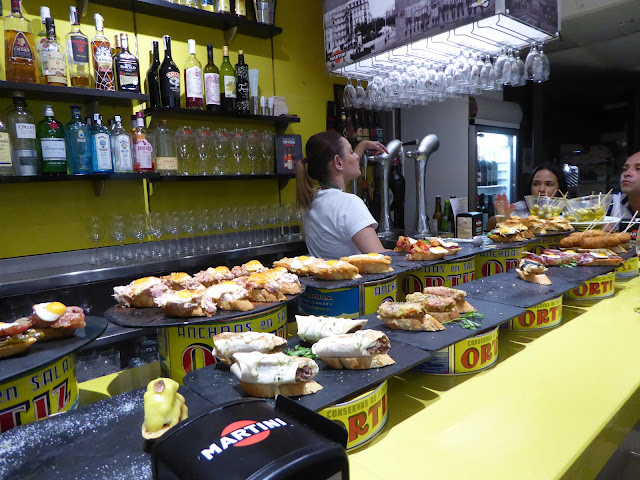 After pintxos for lunch in the market, we then had pintxos for dinner in a bar! Don't judge - we were only in Bilbao for one day and had other things to try during the rest of the trip! The bar (pictured above) was tiny but there was a good selection of nibbles on display and more you could order to be cooked fresh. We started with some mini burgers, which did a good job of taking the edge off our hunger while we decided what to have next.

Below, left to right we have: 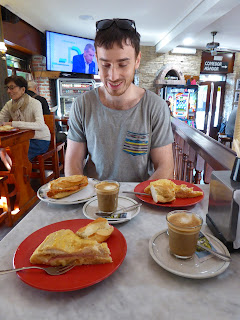 Not a type of crisp or wrap - in Spain the word tortilla is used for what we, in Britain, call a Spanish omelette. The north of Spain is known for having some of the best tortillas, and I think we sampled some pretty good ones on our trip. This first photo was definitely the most interesting example. It was one omelette, but encased in the egg was a layer of ham and cheese, and another layer of (rather oddly) tuna mayonnaise! Well, that explains the delight on Dave's face - egg, meat and tuna all in one bite! It may sound somewhat unappealing, but I have to tell you that it was really good. And a great breakfast. One morning we stopped for a cheeky slice of tortilla, which always comes with some crusty bread and there must have been a breakfast combo deal because we got coffee and a shot of orange juice with it, all for just €1.50 each! 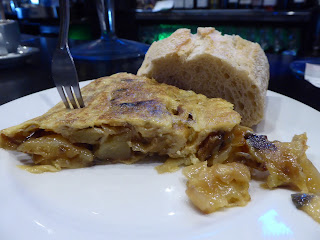 This second omelette was my favourite though. We again had it for breakfast, in a very unassuming bar on a side street in Bilbao. The lady working there was making them fresh in a tiny kitchen and what made this one stand out was the deliciously caramelised onions. It was also less cooked than the one pictured above, which is normal - Spanish omelettes should be a little runny in the middle. I haven't mastered this process yet, but I'm determined to get it right because it's such a tasty dish!

This enormous plate of squid was actually a starter! The baby squids had been tossed in flour and seasoning and then fried, making the tentacles really crunchy, while the body remained tender. Or so I'm told. I ate some of the crunchy bits but that was about it - seafood still isn't my cup of tea. 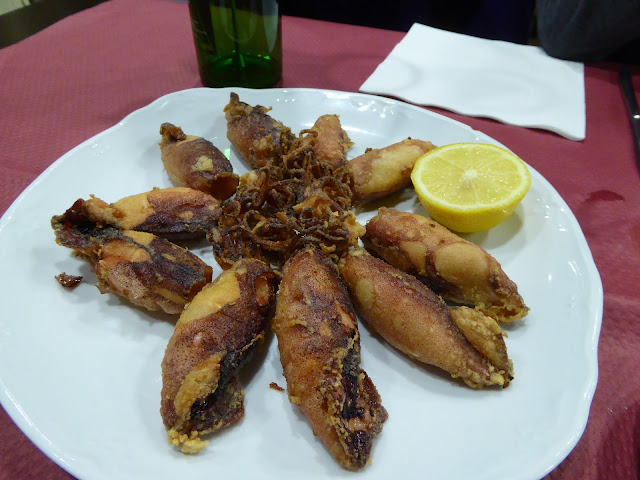 At the same restaurant in Gijón, we share this plate of steak, potatoes and roasted red peppers. I tried to salt it like Salt Bae but didn't quite get his signature move right! Regardless, it was really well cooked and tasty, and having a pot of sea salt to season it ourselves was an interesting touch. 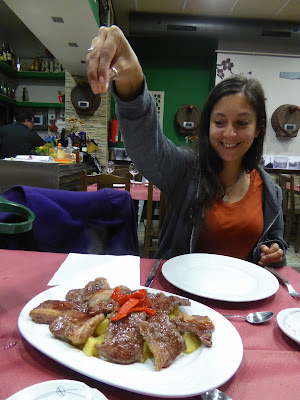 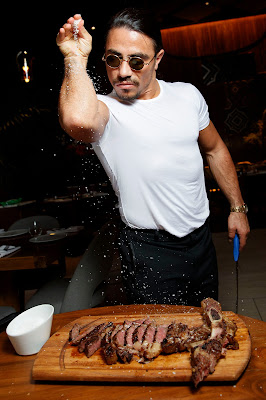 It seems wherever you go in Spain, the same things crop up as the local delicacies: wine, meat, cheese. Well, Asturias certainly had the cheese sorted! We went to a restaurant in Gijón called Sidrería Tierra Astur, which I'd read was a good place to try all of the traditional dishes from the region. We started we a cheese board and there were certainly some unique flavours!

Dave's favourites were the Gamonedo (aka Gamonéu), which I thought tasted old (whatever that means!) and the Cabrales, which was blue, salty and very strong. My favourite was the Afuega'l Pitu, which was soft, spicy and quite tangy.

We did not like the Casin at all, and the Beyos tasted of literally nothing. But with the help of Spain's favourite quince paste, we were able to eat pretty much all of it! 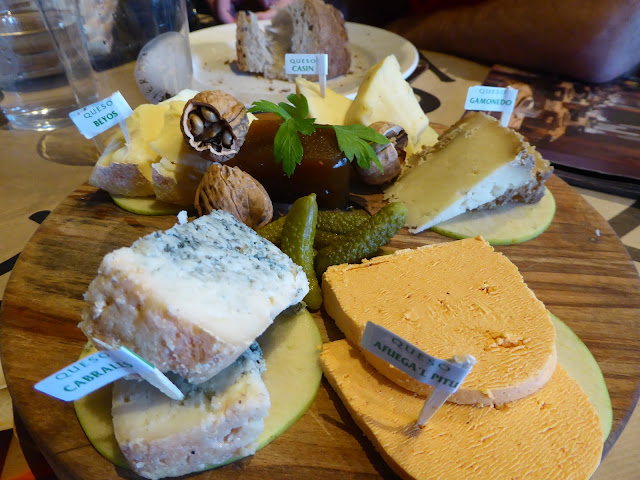 We followed the cheese with something called Tortos de Picadillo de Jabalí. The torto is a flatbread made from corn flour, which is deep fried, making it puff up. Picadillo is minced meat, in this case Jabalí - wild boar. And this came with chips and a couple of fried eggs. Not a vegetable in sight! The dish was huge, very rich and the salt and grease got the better of my quite quickly. The meat tasted similar to chorizo but nothing about the dish was particularly new or noteworthy, apart from perhaps the tortas. 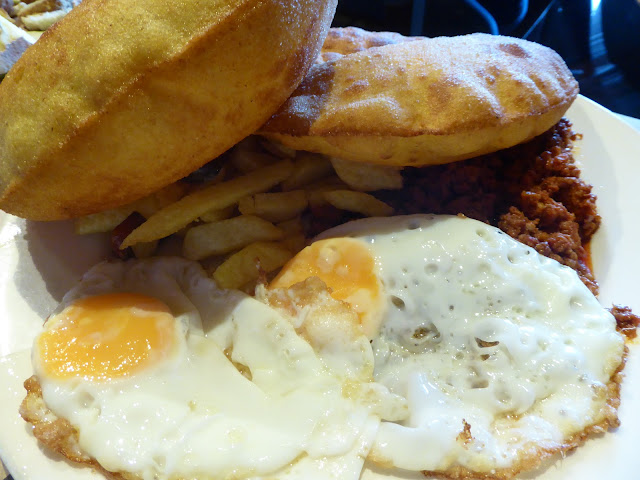 The thing we were really excited about at this restaurant wasn't the food at all, but the drinks. It was here we got to experience and marvel at the Asturian cider tradition! I'm a big cider fan anyway, but add a bit of pomp and circumstance to the proceedings and I'm in heaven.

To briefly explain, there is a huge tradition of cider, or sidra in Spanish, in Asturias and the Basque Country, but it isn't quite the same as the cider we drink in Britain. It isn't carbonated at all, and it has a much tarter flavour than our traditional scrumpies. It's definitely less challenging than a really hardcore scrumpy, with none of the farmyard notes. It is a very pleasant and refreshing drink, but the true magic is in its presentation. You see, the cider must be aerated as it's poured, as demonstrated in the photo below. And only a small amount is poured each time, meaning this waiter was on hand to top up our glasses regularly throughout the meal. It's a curious site to behold, and we captured it on film, which you can see here. 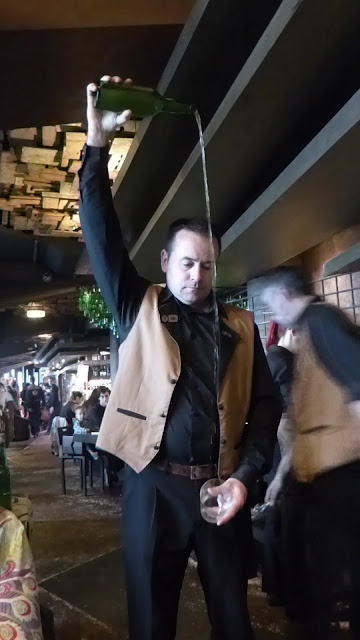 I really enjoyed our culinary experiences in Green Spain and am already looking forward to our trip to San Sebastian in January, so I can eat more pintxos and drink lots more tiny but elegantly poured glasses of cider!