The best way to leave Brunei is by ferry. A land crossing results in several boarder crossings, due to the bizarre shape of Brunei (look at it on a map!) and I just do not have the room in my passport for that many stamps.

We had a stop-over in Labuan, which is a tax haven – alcohol was hella cheap! Anyway we eventually made it to Kota Kinabalu (KK) city, which was a stepping stone on our way to nearby Kota Kinabalu National Park. KK city is pretty much only famous for its frequently spectacular sunsets. 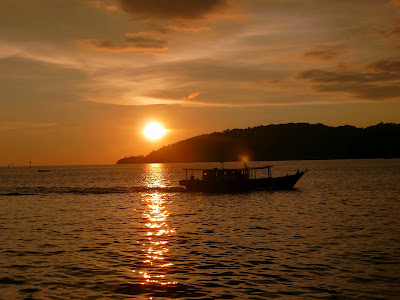 We awoke earlier than we wanted due to a city-wide power-cut (the first one ever apparently) which turned off our air-con and meant we didn’t sleep as well as we should’ve done. We went to the bus station at 7.30am to catch a bus at 8 so we would make it to the park in time for a guided walk. Of course we forgot that we were in South East Asia and the bus leaving at 8 would actually wait until 9 before setting off. The bus was also broken and crawled at 10mph the entire way so it took over an hour longer than it should have anyway – the joys of public transport in SE Asia.


We were staying outside the park rather than inside because of the evil monopolising company called Sutera. They have dorm rooms in the park and half way up the mountain – a night in this dorm costs £100. It’s a massive shame because the mountain is one of the most accessible, (besides the £200 cost) and bio-diverse places on the planet. It is possible to climb it one day but it’s a real rush and the highlight of climbing it is getting up there for sunrise, which you don’t get on the one day excursion. There is in fact a yearly race in which people go up to the peak and back down the mountain in unbelievable times.

Our mountain lodge advertised itself as being 2km away from the park but in truth it was more like 3km, and a hilly 3km at that! So by the time we made it to the park, after the troubled night of sleep and the irritating bus ride, we weren’t in the best of moods and I think this greatly affected our enjoyment of the park. We did a trail but didn’t see much wildlife or any interesting plants – maybe we were just rainforested out after Mulu! Either way, our KK National Park experience wasn’t one to write home about (even though we are.)
One interesting thing about where we stayed was the location of the dorm rooms. To get from our room to the main building (where the only 2 bathrooms were) we had to go outside, up a couple of stairs, across a veranda, and through some patio doors. This wasn’t an issue during daylight, but at night...well, you know what happens at night on Borneo. The place was inundated with moths, big pincer-beetle things and numerous other creepies that meant neither of us drank a thing after 7pm, for fear of needing a wee in the night.
The following day I awoke bright and early...and 24! It was set to be a bit of a non-event as the day had been set aside for travelling to Sandakan (which I didn’t mind) but I was very happy to get beans on toast for breakfast. What really made the day for me, was what Dave accomplished while I was brushing my teeth. He got talking to a couple who were also heading to Sandakan that morning and I don’t know if he has some secret charm reserved only for birthdays, but he managed to talk them into giving us a lift in their rented car! This meant that not only did we avoid another potential 10pmh bus, but our wallets got a rest, and we got to spend the 5 hour journey in an air-conditioned car with two lovely new friends. Brilliant.


Alexandria (from Austria) did a great job of driving, even during several patches of mental rain, and Stuart (from Ireland) kept us entertained with stories of their previous holidays.


The drive was great – we passed acre after acre of palm tree plantations, drove through some mental rain and stopped for lunch at a tea plantation. We sat looking over the tea fields and mountains and I felt really lucky to be having another great hitchhiking experience and a much better birthday than I expected.