We arrived in Bali after a manic month around Malaysia, Singapore, and Borneo – it had been the busiest period of travel planned for the trip. With this in mind, we decided our 20 days in Indonesia would be calm, re-energising, and a good excuse to let our hair down. And what better place to do all that than in the paradise the world knows as Bali.

Our plane landed late and we spent our first night watching the FA Cup final – yay for cable TV in our room! We were staying in Kuta, an area of Bali (in)famous for its partying and drunkenness. So we did very little during the day besides some window shopping, and explored the nightlife at... night.
Kuta was victim of two separate attacks by terrorists that led to hundreds of deaths of foreigners and locals. This is the memorial to remember them by.

The beach in Kuta is long, has good surf (apparently), and seemed fairly busy while we were there during off-season. After Kuta, we moved to a different area of Bali called Sanur, which similarly had a long, quite busy beach and many nice restaurants. 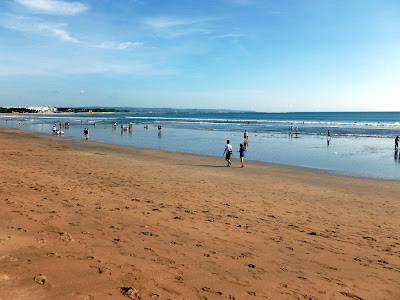 I don’t think either of us were particularly enthralled by these two areas of Bali. They certainly weren’t a tropical paradise and even Kuta wasn’t as lively at night as I expected after visiting Malia & Tenerife in my teens. However it was off-season and that pretty much sums up our view on it; it was a bit off. Our search for a party as well as a relaxing paradise would have to continue...

The most interesting part of Indonesia at that point was that it was the first time either of us has been somewhere south of the equator. And yes, water does run anticlockwise.

Next stop, Ubud – the cultural centre of Bali. Let’s hope it’s less of a disappointment.