Saigon But Not Forgotten

Vietnam represents the beginning of the end of our trip, as we only have seven weeks remaining and I will be visiting countries I have already been to. We arrived in Ho Chi Min City, previously known as Saigon, to begin our route across the classic four SE Asian countries (Vietnam, Laos, Cambodia and Thailand.) We arrived fairly late and went about exploring the nightlife after bumping into a friend we met in the Philippines. Katie left early and when I walked back to the hostel I came across the seedier side of Saigon as I was followed by ladies (most likely) of the night – the downside of being a westerner in Saigon.

Katie’s first impression was that Vietnam felt very East Asian to her, more so than anywhere else we’d been since Hong Kong. I think it was just the bright lights and 90s music. Either way, it definitely felt somewhat similar to China (in a good way!)

The first day we spent just walking around and getting a feel for the city. Not too close a feel though, as millions of speeding motorbikes rushed past us desperately trying to injure us. One of the true tests of being a traveller in Asia is trying to cross the road in Saigon. It is a rite of passage for any backpacker. 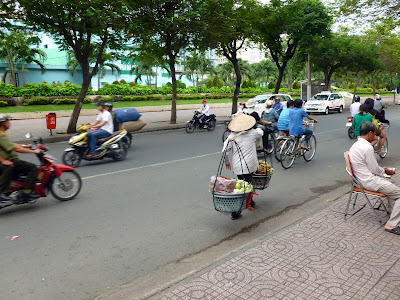 We eventually made our way to Ben Thanh– a terrific “same same, but different” market. We walked around aimlessly while women tried desperately to sell us just about anything. 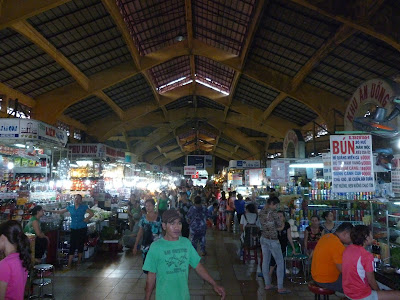 Next up was a relic from French Colonial days called Notre Dame - a big cathedral that is dwarfed by its French counterpart. Not the most impressive thing in the world but we just stumbled across it while wandering. 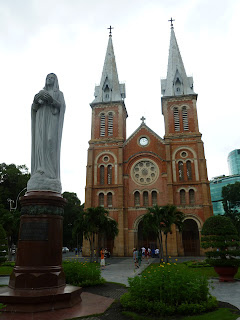 The Reunification Palace was next on the agenda and we took a free guided tour and learnt some more about the war in Vietnam and the palace’s place in the country’s history. The Vietnamese refer to the war in Vietnam as the “American War”, which is the term I shall use to describe this turbulent time. Personally I believe the term too vague, as there about half a dozen wars that it could refer to. I find it funny that westerners are afraid of China’s growing military power, however America has perpetrated more wars while existing for only a fraction of the time. I guess better the devil we know, or perhaps the devil that speaks a common language and only invades countries we know little about. Okay, rant over; here are some photos of this understated palace. We then took a tuk-tuk (say that fast!) to the “War Remnants Museum”, previously known as the “American War Crimes Museum”. We arrived as it closed for midday like many Vietnamese places – some quality planning there. We found a cafe and were chilling in their much needed AC haven while using their wifi, sipping their tea and planning the next few days of avoiding arriving as museums opened. The reason I mention this is that people always say that Vietnam is a money grabbing country, always ripping tourists off – not a view I 100% disagree with - but this cafe refused to take any money from us! A freebie always makes this Jewthiest smile (we did tip though.)

Anyway back in the “American War Crimes”, sorry “War Remnants” museum – come on David, stay neutral. We saw some of the non-war crimes committed by the States. These include murdering / massacring villages full of women and children, using outlawed chemical weapons, torture, and the breaking of many Geneva conventions (Vietnam were guilty of this last one as well!) Here are some photos from the museum that show some of the violence – I didn’t take many photos out of respect and a desire to forget some of the images. 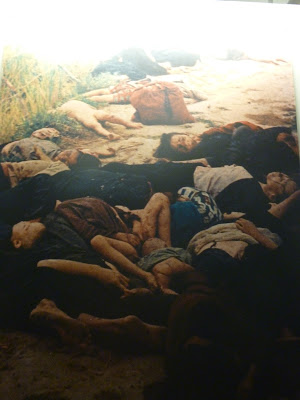 I think it’s important to point out that the first floor is about opposition to the war, much from the US, especially the students. I guess no-one listened to students in the good old days either (cough Iraq war cough). Also the US has extended relations to Vietnam since the war and offered some aid. The journalists really deserve a mention, who risked (and lost) their lives to bring the photos to the public, eventually bringing an end to the war. I guess capitalism got “free press” right.

I’d also like to point out that I don’t blame the soldiers who were fighting either as they were pushed to extremes I will hopefully never experience. The issue for me is not to assign blame but to make sure that this never happens again...

As well as America dropping more bombs in Vietnam than they used in WWII, they also dropped Agent Orange (amongst other colours.) These “agents” contain a chemical called Dioxin that damages DNA, causing problems including cancer, birth defects, and death, Children are still being born with massive deformities  and the room showing photos of these children is nothing short of despicably shocking. Don’t worry, I won’t include photos (I didn’t take any but google to your hearts content.)

As Dave had already been to this museum, he left me alone to wander around at my own pace, which I was really glad of. I don’t think I could have really spoken to him while we were in there, as I felt really emotional and appreciated being alone with my thoughts. It was a horrible place, but it’s a fantastically organised museum with just the right ratio of photographs to writing, so that I never felt bogged down with reading, and therefore read everything and learnt a lot.

I do believe that this museum is a must-see when in Saigon and hopefully will dissuade nations from engaging in such chemical warfare in the future. I’ll finish by saying one more thing: American soldiers who handled Agent Orange were negatively affected by it too. They received millions in compensation from the US Government and the chemical companies involved. The Vietnamese have not received a penny.