Amazônia In My Mouth

All you foodporn lovers are going to be very happy this month because we've got quite a few food posts coming your way! Not surprising really, since we were on holiday for three weeks and you surely know by now how much we eat!

This post is about the food we tried in Manaus and during our four day tour in the Amazon. The main culinary attractions of Amazônia are the fish and the fruit. I'm going to tell you about the fish, but I am planning a special post dedicated entirely to the weird and wonderful fruits we have been enjoying in Brazil, so you'll have to wait a bit for that. 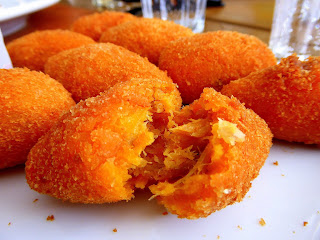 The first restaurant we went to was Tambaqui de Banda, which has two branches in the city. We got a starter of bolinho de pirarucu. Pirarucu is an Amazonian fish and one of the largest fresh water fish in the world - they can grow up to 4.5 metres long! The flavour was a bit too fishy for me. I think it's because bolinho are made from dried fish, so even the traditional cod ones have a very strong flavour. But Dave enjoyed the bolinho, and in the jungle we tried fresh pirarucu which was much milder and tastier.
The starter was just us being greedy and impatient (as usual) because what we had really gone to the restaurant for was the tambaqui. This is another Amazonian fish, which looks a bit like a piranha and can grow up to one metre in length. I had read a lot of reviews and suggestions about eating tambaqui "ribs" in Manaus, but wasn't really sure what to expect. Because we chose a smaller sized fish, the "ribs" weren't as big as some photos I had seen but it didn't matter because it was delicious! The meat was white and creamy, mild in flavour and beautifully cooked. Grilled simply with some garlic, this was the best seafood dish I have had in Brazil, and Dave thinks it is one of the tastiest fish he has ever eaten. Next up is traditional soup from the northern states of Brazil, called tacacá. There are several components to this dish which, in all honesty, wasn't that great and Dave didn't manage to finish. First there is the tucupi; a broth, made from cassava juice and seasoned with salt and garlic. Into the broth a gloopy blob of tapioca starch is added, which just sits at the bottom of the bowl like a lump of wallpaper paste. Dried prawns give the soup a fishy hint and add nutritional value, but by far the most interesting element is the jambu. These leaves look a bit like spinach and have a bitter flavour, but more importantly than that, when we chewed it our mouths and tongues became completely numb! It acts as a sort of anaesthetic.

On our last night in Manaus, we went to Banzeiro, the top rated restaurant on tripadvisor. Check us out being all fancy schmancy! This was our penultimate chance to try Amazonian delicacies (we still had a lunch to eat the next day) so we wanted to make it count. As always, we over-ordered but luckily we were with Thomas and Laure, our two friends from the jungle.

We were given a little cup of caldo de pirarucu (fish soup) while we were agonising over the menu, and it was really tasty. I really enjoyed the use of coriander in the north, and the food in general was a bit more flavoursome than in Rio. This soup wasn't too fishy, and was a great start to the meal. Of course we still wanted to get some starters, so we ordered some tapioca cubes. These were crunchy on the outside and chewy on the inside, not a lot of flavour but the cupuaçu jam it was served with was weirdly addictive. Cupuaçu is another fruit I will be explaining about soon.

The soup and tapoica were brilliant introductions to the Amazonian restaurant, but the creme-dela-creepy of our starters is pictured below. A smooth and sour puree of the ubiquitous mandioca/cassava topped with two rather sizable ants! I have to say I think this was more of a novelty than a particularly outstanding dish, as the ants kind of got lost in all the foamy puree but I definitely felt a bit of a crunch! 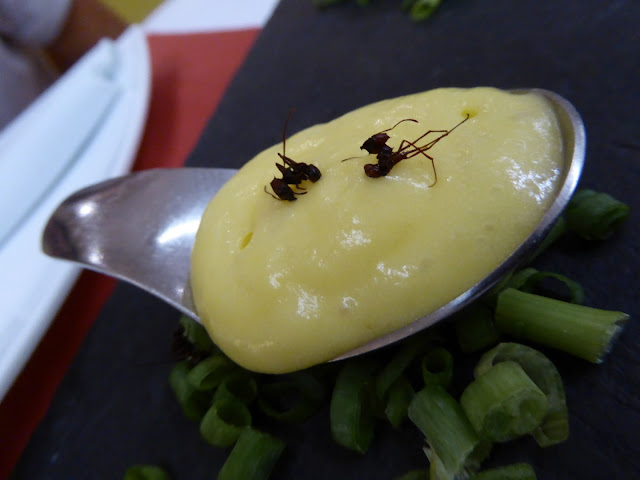 For mains...well it was the classic Brazilian experience. The menu gave no indication as to how many people each dish served, so we thought sharing two between the four of us would be fine. And maybe it would have been, if all the side dishes hadn't been so monstrous but as it was we were faced with far too much food. Anyway, the photo below shows everything we got and I will go around and explain it all.

At the top is is an Amazonian fish called matrinxã, which was stuffed with a gritty, couscous-esque thing called uarini flour (I think it's made from cassava but not 100% sure). This was the weaker of the two fish we got, with a more oily, fishy flavour. Below it, to the left is the tambaqui, which stole the show. Meaty, creamy and mild, it is well worth travelling into the jungle for! Below the tambaqui are some fried bananas - slightly caramelised and soft. Dave likes these, but I gave them a miss. Next to the bananas are two types of farofa, one was pretty plain and one had eggs. Same old same old really, but we do always enjoy it with eggs. The final two sides were a bit more interesting. The black rice was chewy, nutty and moist. Next to it is baião de dois, a traditional north-eastern rice dish with beans, vegetables and coriander. This was really tasty and we had it a few times during our trip. 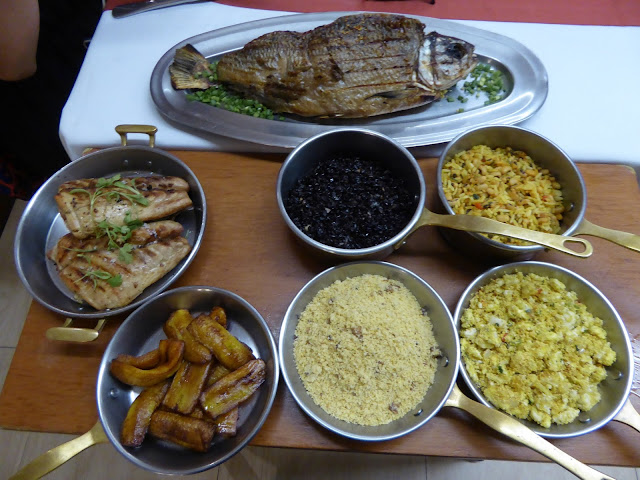 The final restaurant we want to tell you about was one we went to right before leaving Manaus. It's called O Lenhador and has a fixed price of R$90 for their lunch buffet of Amazonian dishes. This is what we tried: 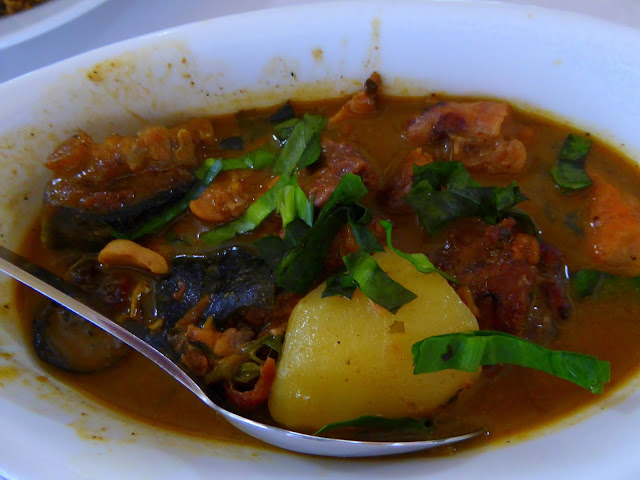 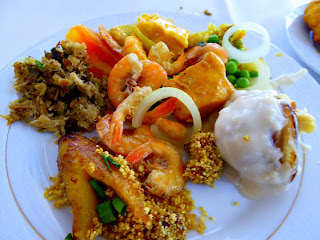 Here is a picture of one of Dave's plate-fulls from the buffet. All in all the food was very disappointing - over-cooked, soggy, flavourless or just not nice. We got to try some things we hadn't had before which was good I suppose. The desserts were a let-down too! Below you can see a collage of what was on offer - just loads of overly sweet fruit purees, jellies, puddings and mouse. A slightly naff way to end our time in Manaus but scroll down to see something yummy lurking below the desserts... 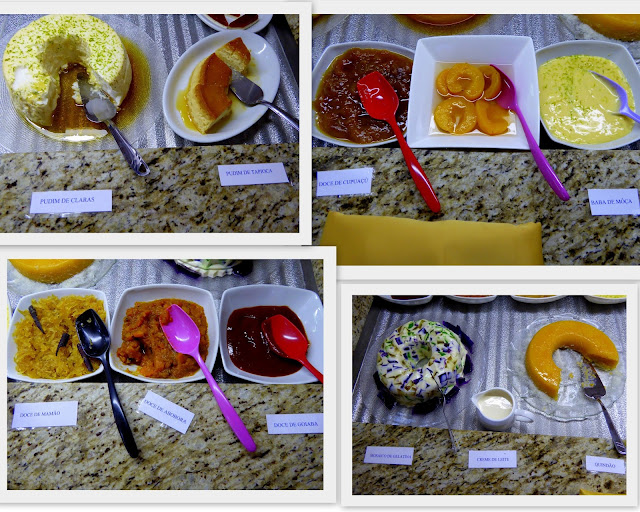