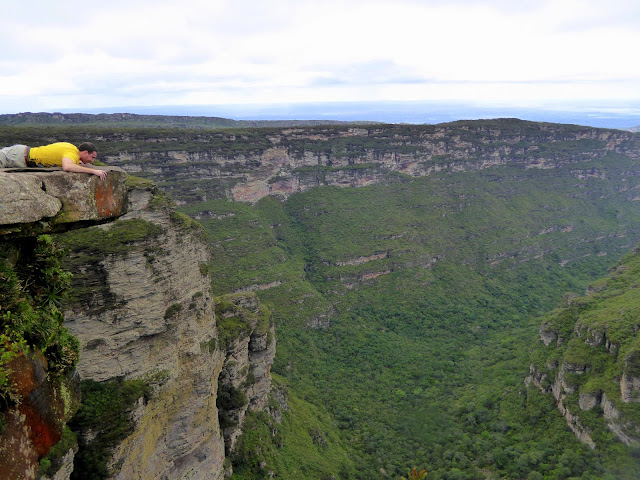 You can read all about our first two days in Chapada Diamantina here. On day three we were still in Lençois staying in our little pousada (i.e. B&B). We met an Irish couple, John and Edel, who were three weeks into their nine month adventure around South America. They are keen hikers and were brought to Chapada for similar reasons to us – claims that it boasts some of the best hiking in the world.

We went with John and Edel on a hike to the second highest waterfall in Brazil. The highest in the country was recently found in the heart of the Amazon, of all places! We hiked to the waterfall as part of a group of seven people, with an English speaking guide. It was an hour and a half’s drive along poor quality roads to the start of the hike. The first half an hour of the hike was uphill and difficult. Especially for Katie, who had a cold and was struggling to breathe. The views on the way up were magical though, and would take anyone’s breath away, cold or no cold. 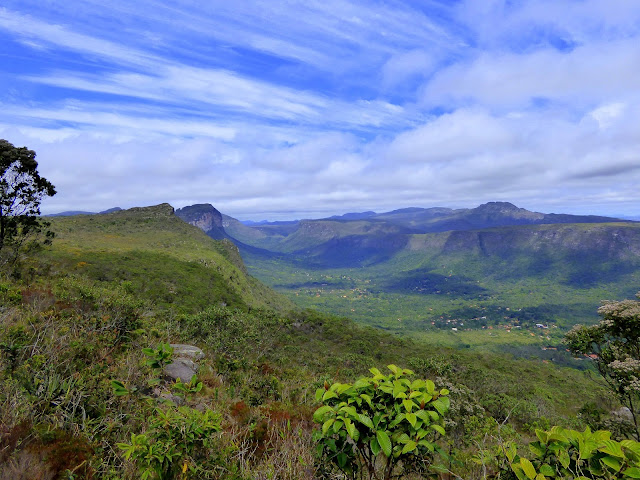 After 1.5km going up we reached the top and walked along the flat path for another 3.5km. The mountains in Chapada are very flat on top and it makes for a strange view. It’s also where the name of the park comes from, as chapada means plateau. The terrain on the top was very wet, muddy and apparently a lot like the bogs in Ireland. We were happy to be wearing our proper hiking boots, as we saw people in trainers really struggling. But at one point we reached a puddle that even waterproof boots couldn’t contend with. It was about ten metres long and almost knee-deep in places. So off came the shoes and socks as we were forced to wade our way across – how exciting! Was anything going to stop us today? NO!

As we approached the waterfall it seemed to be raining although it turns out the raindrops were actually coming from the waterfall itself. What we weren’t told prior to starting the hike was that in order to see Fumaça waterfall in all its glory, you have to crawl out and peer over the edge of a big rock that crops out of the cliff-face. Once there, you are looking down into the abyss; you can see the waterfall, the small body of water at the bottom of it and certain death if you were to fall. I looked over for a few seconds but a feeling of dizziness washed over me and meant I couldn’t look for as long as I would have liked. Katie was even more nervous and John caught this on film…hilarious.

In fairness Katie tried and was able to hike there while a lot of people weren’t able to. The view was great though. We then followed the same trail back down and were happy to end the hike there as our legs were stiffening up. The next stop was another waterfall called Riachinho, which was a little easier to get to and was the perfect place for a bit of a swim. John and I took advantage of the opportunity and we sat half way up, enjoying the streaming water on our faces. We were definitely not fearing for our lives in case a rock came tumbling down and smashed into our heads! After a while we climbed back down the slippery rocks, got changed and headed back to Lençois for about 7pm.

The Bluest Cave in all the Lands 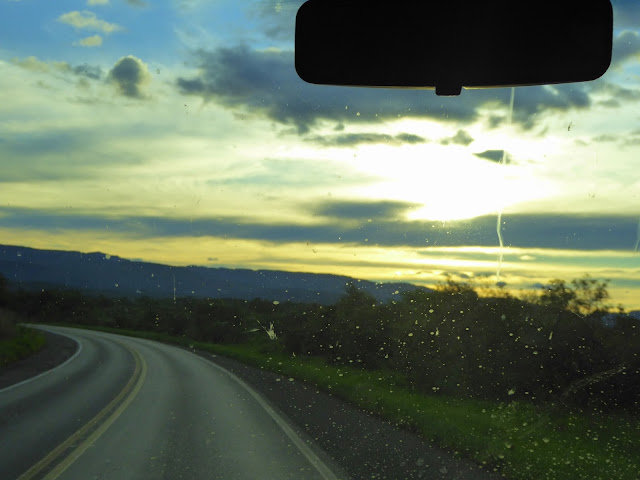 John and Edel headed off for their four day trek, which you can read all about on their blog, and we decided to spend our final day visiting two more caves; Poço Encantado and Poço Azul. I say we spent the day visiting the caves, but really we spent most of the time in the van, driving along roads that were in a terrible, bumpy condition. After driving for more than two hours from Lençois, we finally reached Poço Encantado. We spent half an hour walking there and looking at the magical cave. The water was incredibly blue – truly the boldest of blues you can imagine. It is over 60m deep at one point and when the sun shone through the gap in the rock it was really incredible to look at. 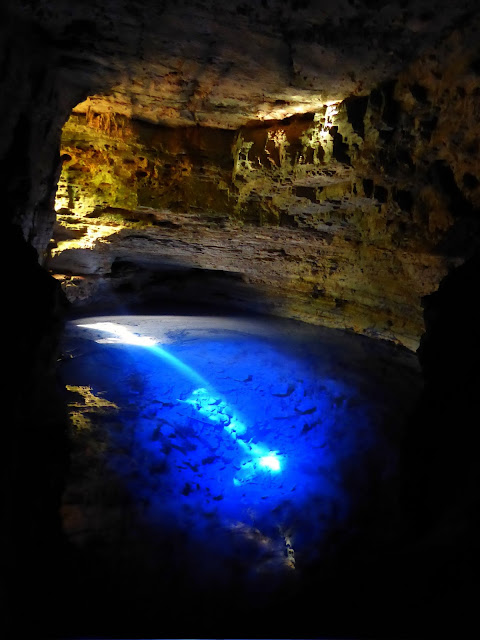 With the feeling of magic inside us, we got back in the van for another hour-long drive. It’s worth mentioning that the number of birds we saw out of the window was astonishing. The hilly nature of the red, sandy road looked very alien and it was an interesting landscape to gaze at.

The van finally pulled over and we had to take a boat, which we were cheekily charged extra for, to cross the small river to the second cave. We then went snorkeling in another vividly blue pool. The blue was amazing and this experience was something very special indeed. 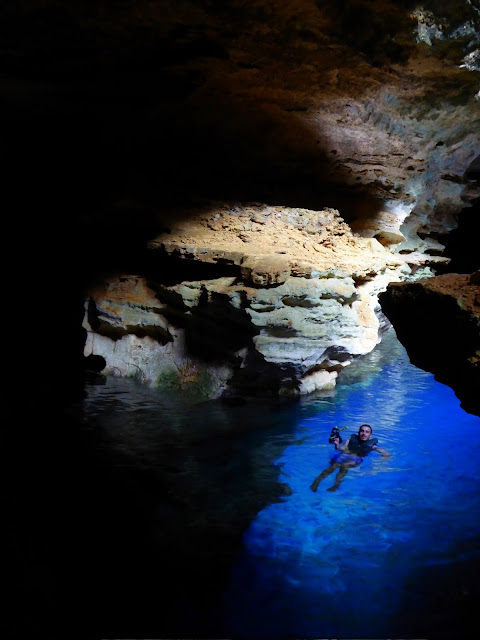 Of course we then had another two hour drive back to Lençois. A day spent mostly in a van, the day before we were going to spend what turned out to be eight hours on a bus back to Salvador. Yippee!

We very much enjoyed the activities in Chapada Diamantina national park and there are some wonderful things to see there. The annoying thing is the amount of time it takes to get between places, and the price of the tours. I thought they were overpriced and the cave tour on the last day had sneaky hidden costs. Accommodation in Lençois isn’t cheap either. I wouldn’t say you shouldn’t go, but I also wouldn’t say it’s a must-see. We had a good time, but not a great time. How much of that was because we had just come from our amazing Amazon tour? Who knows. Brazil is an expensive place to travel (even when £1 = R$5 – the highest in ten years!), so I advise travellers to choose their activities wisely.

Having said all that, I am happy that we went as we ate some great food, really enjoyed the town of Lençois and saw some spectacular things. 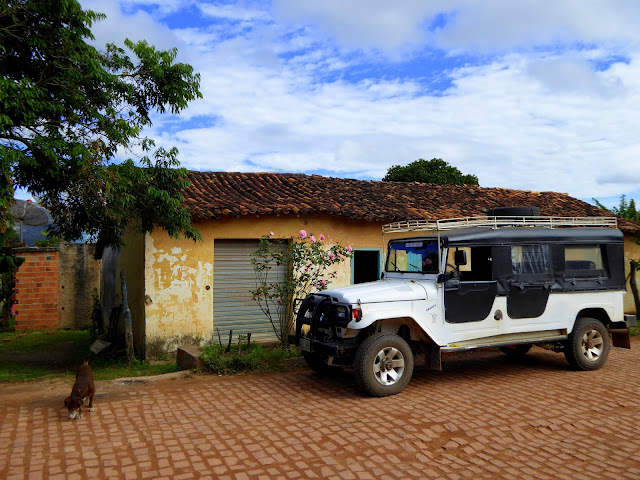 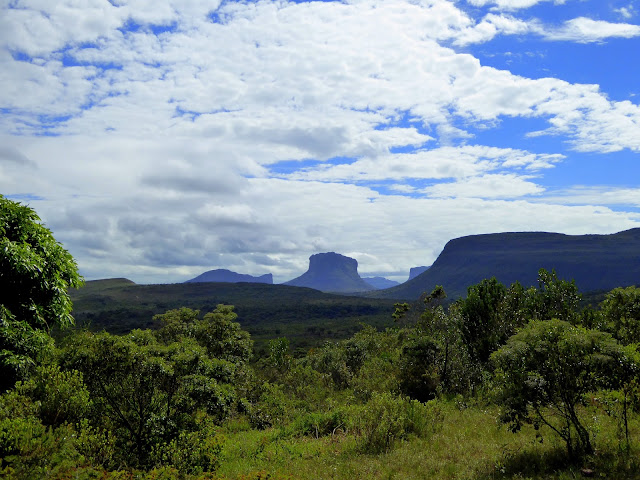 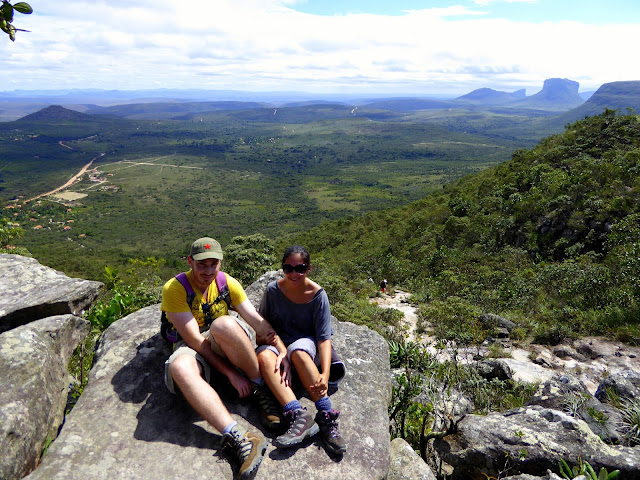 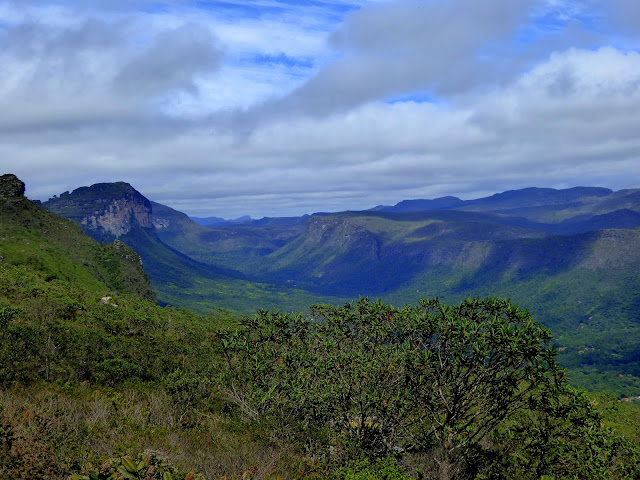 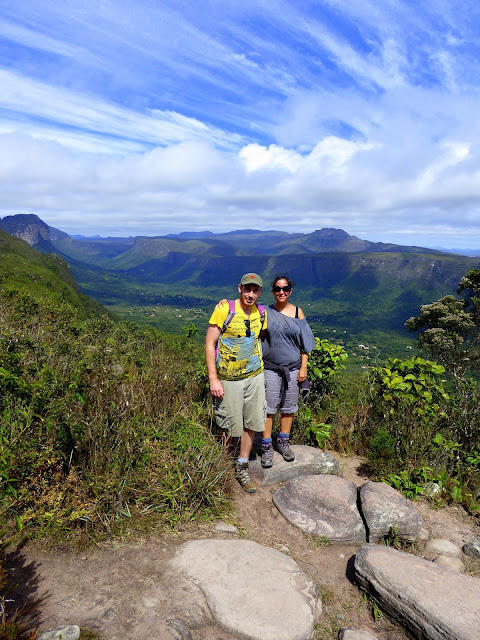 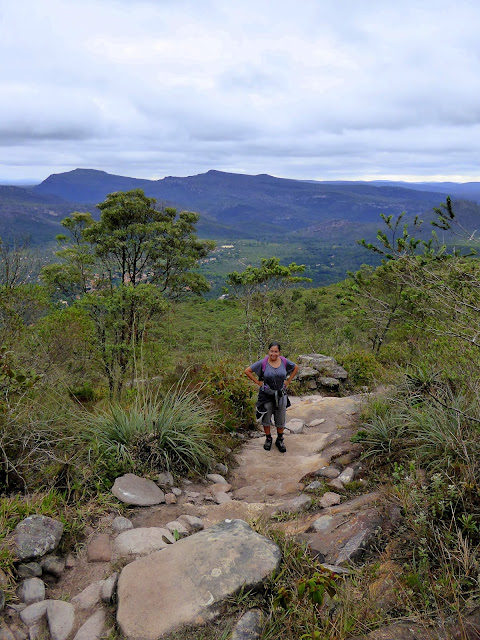 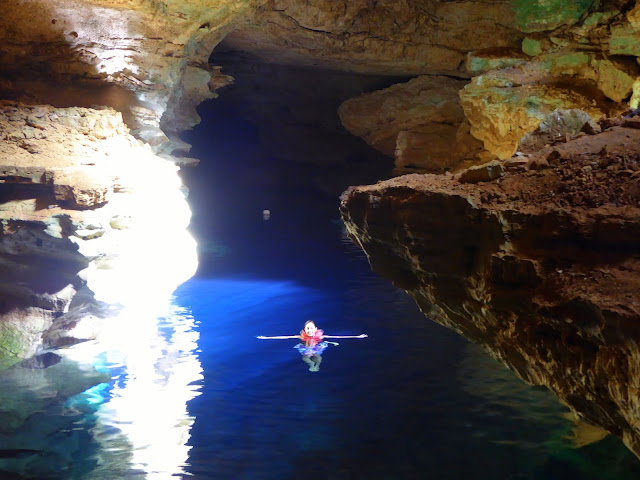