Bahia In My Mouth

We had very high expectations of the food in Bahia, as it is known for being flavoursome, punchy and spicy. The food we tried there was good, definitely more variety of flavours than the standard options in Rio...but it didn't blow my mind. Maybe we ate too much incredible food on our travels through Asia, but Brazilian food just isn't standing up.

What we know of Brazilian food in the UK is meat, barbecue, and more meat. So if that's what is worth exporting then maybe it's the only thing that really translates to people outside of the Brazilian lifestyle and culture. And of course, Brazilian barbecue is incredible and we haven't had beef that was anything short of brilliant here so this reputation is definitely well deserved. I'm just not sure there is too much else I will miss (food-wise) when we leave, unlike the numerous Korean dishes that I pine for on a weekly basis! 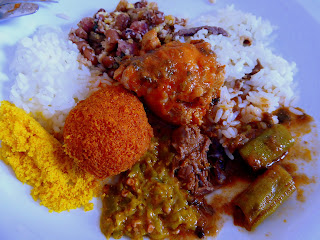 Anyway, let's put my snobbishness aside while I tell you about what we ate in Bahia! We decided to dive straight in and go to a highly recommended buffet for our first big meal in Salvador. The restaurant is catered by a cooking school and offers a lunch and dinner buffet of a huge variety of traditional Bahian dishes. Slopping different stews onto our plates was never going to result in pretty photos, but I have included one because it showcases an unusual ingredient. On the left you can see some farofa, which was much yellower than the kind we have been served in the rest of Brazil. This is because it has been fried in a different kind of oil - dende oil. This oil is red/orange in colour and is made from the fruit of the oil palm tree. It is a traditional African ingredient and very widely used in Bahian cooking. It has a distinctive, musty flavour and adds a wonderful colour to the dishes it is used in.

The problem with eating at these buffet restaurants is that between us we try so many different dishes that it becomes really hard to keep track of what we ate, what it was called and what it tasted like. Making notes is always helpful but even then it becomes a bit of a blur when there is just so much to remember! What I do recall is that there was a lot of okra, which I love, Dave had some stewed mussels which was unusual and generally the food was tasty.

These next two photos aren't of particularly amazing food, but I'm including them for comic reasons. See, we're used to portions in Brazil often being enough to feed two people, even when it isn't explicitly stated on the menu, and we tend to use price as a guideline. We know roughly at what point a meal costs enough that it will feed us both...but Rio is an expensive city in Brazil so it turns out this method isn't transferable to Salvador! At one particular bar I ordered a portion of escondidinho (it can be made with a variety of meats, topped with cheesy mashed cassava - basically a Brazilian cottage pie!) and Dave got an octopus salad. If there had been four of us we might have just managed to eat everything but even with Dave's massive appetite, the two of us ended up leaving a lot. I hate wasting food, but sometimes it just can't be helped. 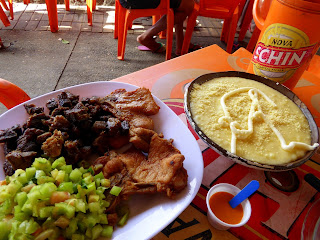 Moving on, this is a meal we had by the seafront in Salvador, after visiting Bomfins church. It was from a very popular quiosque and we ordered what looked to be the most popular combination of dishes. On the left you can see a salad of green tomatoes, onion and coriander, next to some sun-dried meat and a couple of pieces of juicy pork. This was served with a big bowl of cheesy purée de mandioca (cassava puree/mash) and some very hot chilli sauce. We washed it down with a local beer called Schin.

One very typical Bahian dish that we tried and really enjoyed was moqueca. This is a fish stew flavoured with coconut milk, tomatoes, coriander and dende oil. The fish was on the bone which made it a little annoying to eat but it was a lovely meal nonetheless. We ate it in Lençois in a very lovely restaurant called Quilombola and were given a free caipirinha and great service. On the left of the photo you can see a bowl of orange stuff. This was a weird, gloopy side dish made from cassava (of course!) and dende oil. I wasn't too keen but it was really unusual and gelatinous. 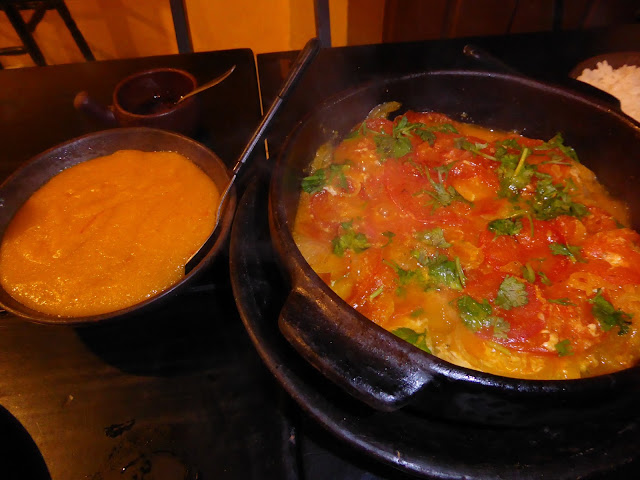 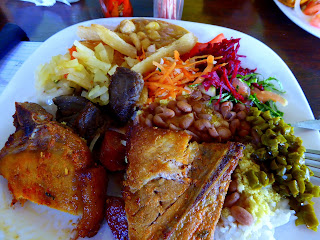 This is a plate of food we had on one of our tours in Chapada Diamantina. It was pretty standard but there was one noteworthy item that we had not seen before. At the bottom right-hand side of the photo are some small green pieces of cactus. This had been cooked with, I assume, some garlic and onion to produce a lovely little side dish that we have not eaten before or since. There was nothing particularly special about the flavour or texture though, and I would liken it to eating slightly overcooked green beans, in a good way.


I am feeling guilty for being so harsh earlier so below is a picture that I have titled "A Tribute to Brazilian Banquets". We ate this particular feast sitting outside on one of the main streets of Lençois, at a lovely restaurant called Lampião. It was a simple affair of rice, beans, beautifully cooked steam, grilled onions and pineapple. I have had barbecued pineapple a couple of times here and have falled completely in love with it! I hope it works with the tough, woody pineapples we get at home because I need it in my life forever. 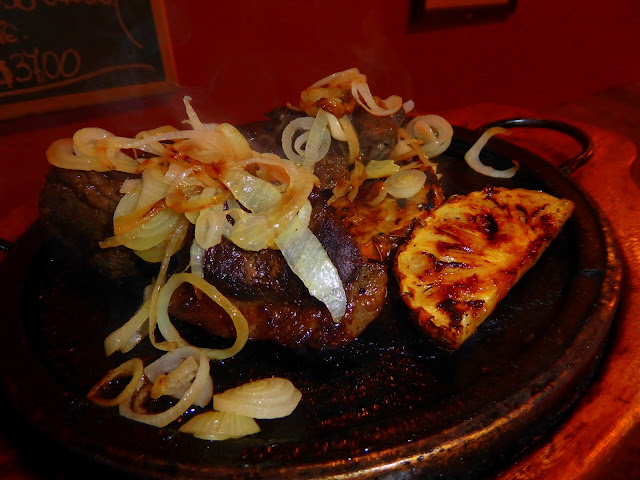 Last but by no means least I want to tell you about a restaurant I fell in love with in Lençois. On our first night there we walked past this place and were given a voucher for two free caipirinhas by a very charismatic and friendly waiter - #winning! So the next night we went to claim them and boy am I glad we did! The place was playing funky music and had some comfy outdoor seating on the pavement, from which we watched two hippies and an old man play panpipes and a guitar whilst serenading us in Spanish. The caipirinhas we got were the best passion fruit ones we have ever had and the pizza we order was a wonderful twist on a classic - ham, pineapple and mango! What with charming waiter and fantastic atmosphere, is it any wonder we nicknamed this place "Jamie's Italian"?! Of course the real name is el Jamiro and they didn't just serve Italian food but a whole range of dishes so it's well worth a visit if you're ever in the neighbourhood! 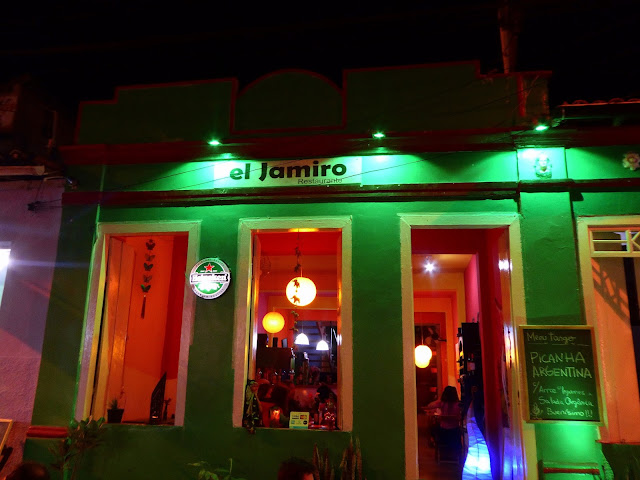