Puerto Princesa: What A Croc!

The journey from Port Barton to Puerto Princesa turned out to be one of the most interesting of our trip. We took a jeepney again and were crammed in the back with boxes of dried fish, sacks of grain and roosters that roostered away.


The dirt road to Roxas (the junction where we’d join the concrete highway) had been completely flooded by the rain. After being amazed at how well our tricycle driver had navigated us into Port Barton, we were shocked at how bad our jeepney driver was at getting us back out. As we drove up the mud track, the jeepney rocked violently from side to side as it hit rocks and potholes in the “road”. At one point we very nearly tipped over, and everyone had to get out so the jeepney team could power through the toughest bit of road. 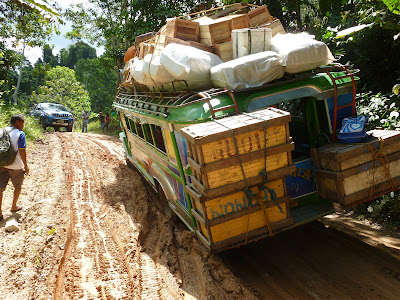 The jeepney made it to the junction and concrete road in just about one piece...and then the alternator broke, so we got on a replacement bus. From this bus window we saw a truly bizarre sight. A branch had fallen in the road, and the road crew had put up a sign warning motorists to move over, INSTEAD OF JUST PICKING UP AND REMOVING THIS 3 FOOT BRANCH. It really made us question the logic of Filipino road workers.

This bus journey also led to one of the most horrifying experiences of my life. As we were driving through the gorgeous countryside I suddenly became aware that I was singing. I then realised, with shock and amazement that the driver was playing that old 90s classic “Boom Boom Boom Boom” by the Venga Boys and I KNEW ALL OF THE WORDS. Truly terrifying.

Anyway, we arrived in Puerto Princesa and the only thing of interest that we actually did (besides me getting a haircut for 60p), was go to a crocodile farm.

The crocodile farm and adjoining nature reserve was an intriguing end to our time in the ‘Ppines. We saw many types of crocs – some indigenous to the Palawan, some endangered, and a variety of other animals. 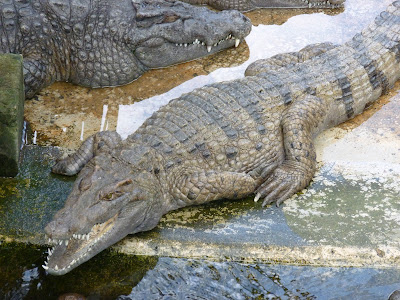 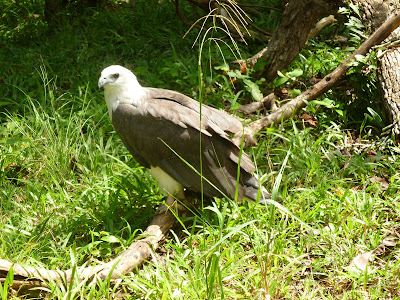 After seeing, feeling, smelling (and hearing?) the beautiful crocodiles, we decided we should complete the sensory quintuple and taste some (not the endangered kind!).


Our time in the paradyxical Philippines had come to an end – leaving was bittersweet, as we had had a snorktacular time, but were stung by an unexpected airport tax of £10 each.