Still feeling a little sick from some dodgy Filipino cuisine (info coming soon!), we jumped into a cheapney (jeepney) and headed south to a junction called Roxas. We missed the once-a-day connecting jeepney from Roxas to Port Barton and since a storm was brewing, we decided to pay for a tricycle. Just as we hopped on, the heavens opened – it was going to be a frightening two hour ride down a flooded dirt track.
We came very close to tipping over on a couple of occasions but our skilled tricycle driver managed to rock us back to position. The rain was really coming down hard making the roads almost impassable but somehow our driver got us there in one piece. It was seriously scary and downright dangerous – all in the spirit of backpacking. We arrived alive but the rain had taken one casualty; my entire right side was soaked. However my left side was bone-dry making me look like Two-Face from Batman.
Port Barton got its name because it is a port (obviously) and home to more racist attacks than anywhere else in the Philippines. It as originally called Joey Barton but some dickhead English Premier League footballer sued because that’s what he does when he isn’t assaulting black people. [This may or may not be true]

Port Barton is actually a lovely place, when it isn’t pissing it down but for the first two days, that’s all it did. With electricity for only 3-4 hours a day, we did some much needed chilling, got stuck into a book, and caught up with blogging. We also decided on the NEW SobCoe term to describe the Philippines (as we are now inventing a word for every country we visit.) Drum roll please...
Paradyxical: adj – The juxtaposition of a place being a beautiful paradise, while at the same time, being far from it (a paradox if you will).
Example: Port Barton has a beautiful beach and is surrounded by tropical islands, however in truth it rains, there is only electricity for a few hours a day, and the food is naff.
The rain did eventually stop so we went on an island hopping tour, which was really cool! The first stop was called Paradise Island, which was full of crazy eyed animals (see definition above). 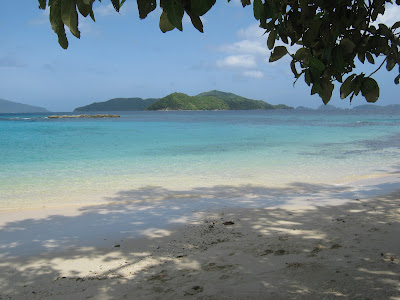 Then we spent a few hours on another secluded beach called Palawan Camping. This is an insanely cool beach resort (only open a few months a year), owned by a Canadian and his Filipino wife. It has huge tents with proper beds and fantastic amenities. We would highly recommend this place and had it not been on/off with the rain, we would have 100% stayed there. 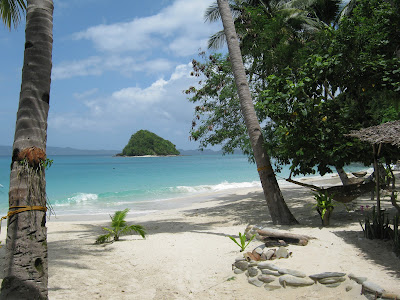 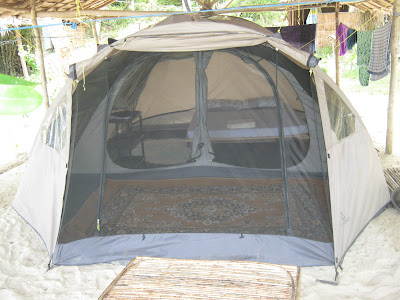 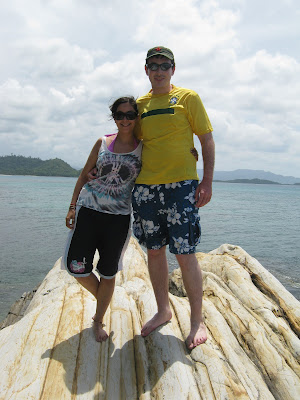 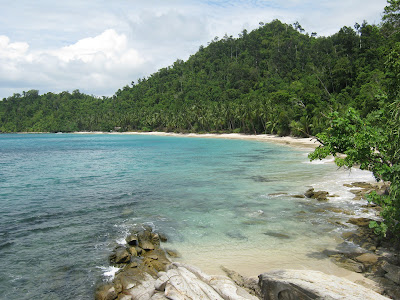 Our last stop was a waterfall on another island – how refreshing. The 20 minute hike in bare feet reminded me of how crazy that Dane had been in Sabang, jungle hiking for two hours with no shoes on. 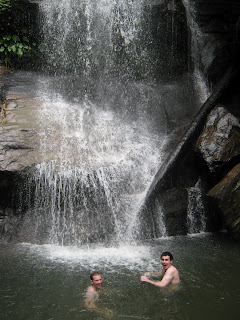 The next day we went on a hike to a different waterfall, which we had been told was impossible to find without a guide. We left guideless but after 30 minutes were approached by a man wielding a machete, asking us if we needed help. All you Ghostbusters fans out there know that if a man with a machete asks if you need a guide, you say YES! 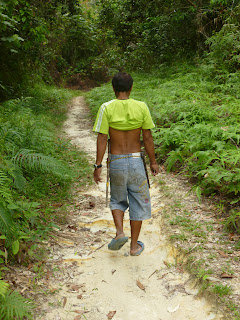 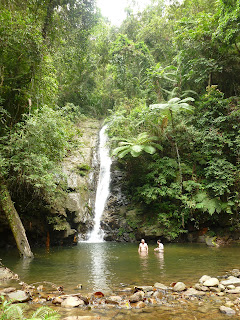 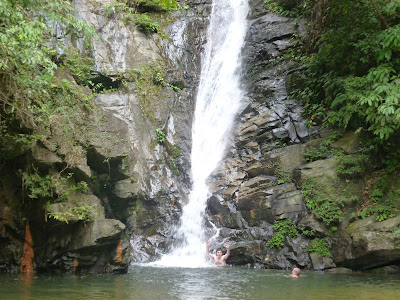 We crossed rivers, sweated buckets, and eventually arrived at the waterfall, jumping in for a refreshing swim. On the way back, we met an army of ants that was so long, it was quite intimidating.


All in all we had a lovely week in Port Barton. We met a very cool Danish couple (our 5th and 6th Danes of the trip so far!), saw some beautiful islands and I walked on my first white sand beach. It was like a holiday within a holiday, Inception style, only without the dramatic music. By the time we left though, I was definitely ready to be somewhere busier. There’s only so much relaxing a girl can do, you know? That said, once we got to Puerto Princesa it wasn’t long before I was wishing for the tranquillity of the beach. The sand is always greener...