We got a private bus from Sabang (aptly named after our encounter with a bomb!) to El Nido, which we had heard was pretty much paradise. On the bus we met a French couple who had bought a canoe in Laos, and after several days of rowing had crashed and almost drowned, and who had also had a pregnant rat give birth in one of their shoes – intriguing people. We also met a posh mother & daughter from Wigan – I say posh, they were staying in the fancy Sheridan resort, which compared to our bat infested hut was a five-star paradise.
When we got off the bus in El Nido, we bumped into two lads from Yorkshire who took us to where they were staying – the Tandikan. We got an en suite room with walls – a true step up from the bat-hut. If that wasn’t enough of a treat, it was on the beach – perfect! 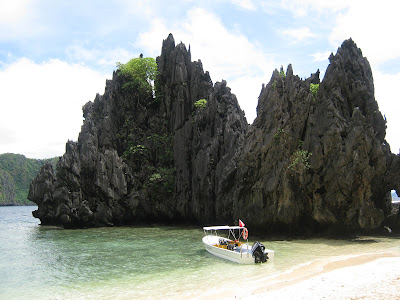 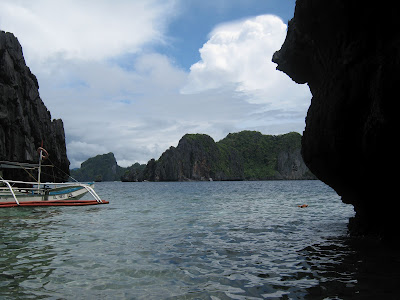 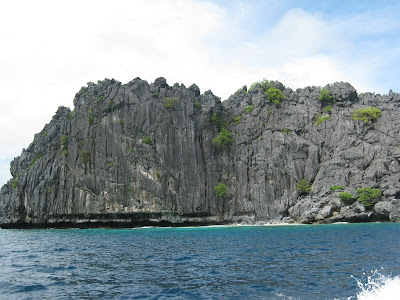 Our plan in the ‘Ppines was to learn to scuba dive, and due to the calm waters, coral and high quality instruction, El Nido seemed the place to do it. We hunted around for the best place and decided that Seadog Diving, run by two guys from Huddersfield, suited us nicely. (Link here) After a day of studying scuba theory, we were ready to hit the water.
We were doing three dives a day. On the first dive, I went down like a yo-yo, very unwise due to water pressure and resulted in me having a nose bleed. Katie bobbed on the surface, freaked out, and got back on the boat. The second dive, Katie got 3m deep and watched me do my skills, such as removing my mask, on the bottom at 9m.
We had two instructors: Barrie and Tim. Barrie took Katie on her third dive and she had a nice swim in shallow water (12m) and saw lots of fish. I was with Tim and a Russian girl and I got down to 18m seeing a lionfish! The lionfish is incredibly poisonous and can kill you if you touch it – I kept a good distance. We were undecided whether to continue and commit to the full cost of the course, as neither of us had fallen in love with it, however we decided to take the plunge.
The next day started with our fourth dive and I was with Tim practicing my underwater navigation skills. I wasn’t very good at the compass work because I was distracted by fish and ended up swimming in circles. However I did finish it and am now a qualified diver! Katie was with Barrie doing the skills I had done the day before and was lucky enough to see a sea turtle. We got back on the boat and I promptly vomited over the side. I had felt sick 12m down but had managed to hold it in.
We moved to the next dive site where Katie successfully navigated Barrie around a coral reef passing a lionfish and another sea turtle. Katie had now also finished the course and was qualified! Yay! This was the dive for me where I fell in love with scuba. I was moving comfortably and was just enjoying myself in the water.
Our final dive was with Tim and as qualified divers, we just swam around having fun looking for interesting fish. I finally saw a sea turtle (Katie’s 3rd) and Tim had his camera so we even got some cool photos. On this dive we reached new depths of 23m. 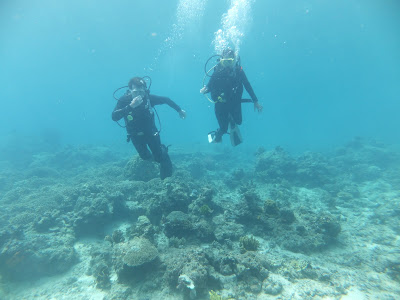 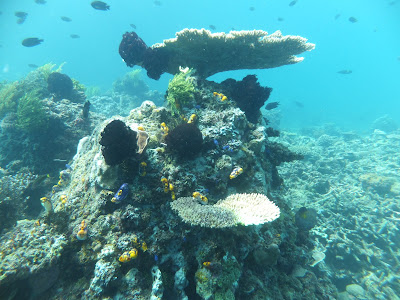 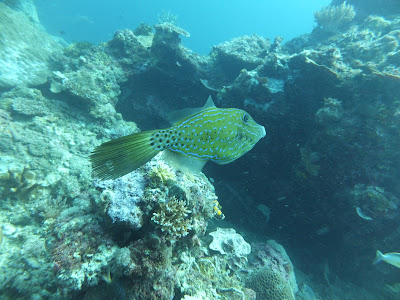 Back on land we rewarded ourselves with booze and food, however I was feeling unwell so didn’t drink much. In the wee hours of the morning I awoke, bolted out of bed, and my dinner bolted into the toilet bowl. This marked the start of our 24 hour toilet relay during which we were passing a bog-roll not a baton.
While lying sick in bed we relived the wonderful experience of scubaring (my new term for scuba diving) and realised what a fantastic time we had had had. Had.