The world’s largest river, online retailer, and rainforest were explored in what was an incredible tour lasting for 4 days and 3 nights. But before we get to that, it’s difficult to start this post without explaining some of the history that has shaped these lands. Fifteen million years ago, the Andes were formed by the collision of the South American plate with the Nazca plate. The rise of the Andes and the linkage of the Brazilian and Guyana bedrock shields, blocked the river and caused the Amazon to become a vast inland sea. Gradually this inland sea became a massive swampy, freshwater lake and the marine inhabitants adapted to life in freshwater. Marine life such as dolphins, stingray and manatees. We learned that there are eels in the river which give electric shocks to trees, causing fruit to fall into the water. The eels wait for fish to come and eat the fruit and then chow down on the unsuspecting diners! A river had previously flowed from the centre of common day Brazil to the Pacific but this continental shift caused a dramatic change in direction and the river switched direction, now flowing west to east. What always amazes me about these geological events are the time scales and how our own existence occurs in a blink of an eye of such changes.

The Amazon contains 15% of the world's fresh water (15 times more than all of Europe's fresh water), flowing from Peru, and is just a mere 200 metres shorter than the River Nile, stretching an equivalent distance of New York to Berlin. The Nile might be the longest river in the world, but it contains only a fraction of the water that the Amazon does. Also in 2011 researchers found an underground river called the Hamza, which is the longest in the world and is worth a cheeky two minute read.

As well as the river, there is of course the largest rainforest, which is known for its biodiversity and medicinal qualities. There are an estimated 390 billion individual trees belonging to at least 16,000 species, some over 1500 years old. A study in 1999 found one square kilometer (247 acres) of Amazon rainforest can contain about 90,790 tonnes of living plants. Some unbelievable facts being dropped here.

The Amazon got its name from the explorer Francisco de Orellana, who was on a mission for El Dorado (i.e. gold), found none and reported back to the King of Spain that the Greek mythical Amazons were present (fearful women warriors). This led to a mass slaughter of native Americans. A population of 5 million indigenous people in Brazil upon discovery by the west now stands at 300,000 and slaughters like this contributed.


Journey to the Lodge… 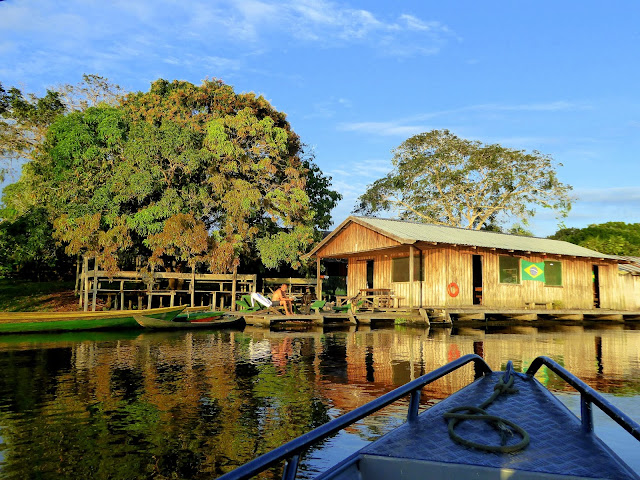 Our first stop on this once in a lifetime trip was at the meeting of the two rivers. The Rio Negro meets the Rio Amazonas and this occurs in a very visible and defined line. The slow mixing that creates this line occurs because of three factors: temperature difference (34°C vs 28°C); pH (the River Negro is quite acidic); and direction of current. This meeting point only happens because the Rio Negro was diverted all those years ago by the volcano eruption.

I am told that life is about the journey, not the destination…well we travelled 45 minutes by car, then took a big boat across to another port to then a van to a smaller port where we got on a smaller boat to arrive at our lodge around 3 hours after departure. During this journey we saw a very fast and camera shy snake swim across the water. We also had a refreshing agua de coco and saw a hell of a lot of birds.

The GPS route to our lodge!


Day One on the Amazon 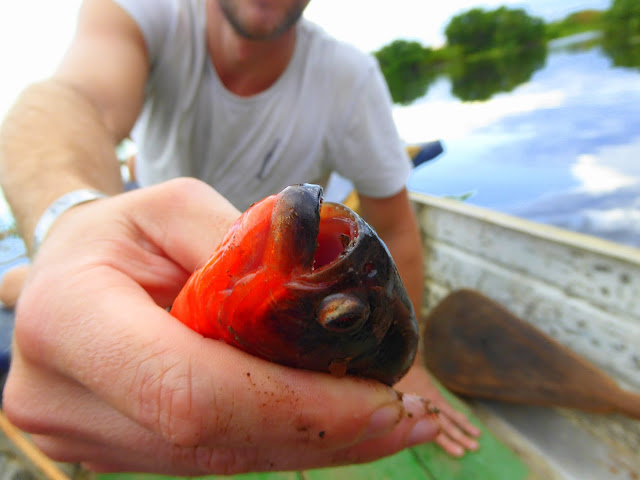 When we arrived at the lodge on the River Juma, I went for a swim in the river to cool down and wash off some of the humidity.  I definitely wasn't terrified of this infamous fish...We saw some parakeets and our first pink dolphin. Nature is difficult to catch on film and my attempts were fruitless. It’s kind of frustrating as a 21st century child because we want everything on film/recorded nowadays, especially new and exciting animals. I guess a written record will have to do. It really makes you appreciate the skill and patience of documentary photographers who spend days waiting to get a few seconds on film.

After this relaxing interlude and some lunch (to be described later of course), we went for an afternoon fishing expedition to catch the carnivorous piranha fish. Using chicken skin as bait to tempt these sharp-toothed predators to bite, it was pretty tough to be quick enough to whip them out of the water when they did. After half an hour of no success, I wisely suggested we should just eat the chicken. But then with a little more practice, we started to have a bit more success and ended up with five fish. There are seven species of piranha in the Amazon, five of which are carnivorous – we caught two different types. I say we, the closest either of us came was when I lifted a heavy one out of the water and then realised I had no idea what to do next. So the fish simply plopped back into the water. It was a reminder that, even as a well educated and apparently intelligent chap, it’s always worth thinking a few steps ahead, not just focusing on the step I am currently facing. It’s an obvious lesson but sometimes when doing a new physical activity like fishing, it can be forgotten.


The piranha had deadly teeth and they would survive on the boat for a few minutes, flapping about, snapping at our ankles and toes. One of our fellow fishermen (a southern Brazilian from near Santa Catarina) got bitten on the hand by the one he caught. It dawned on me later when eating the piranha, one of us was most likely eating an undigested (but cooked) piece of his hand. I could be a cannibal… 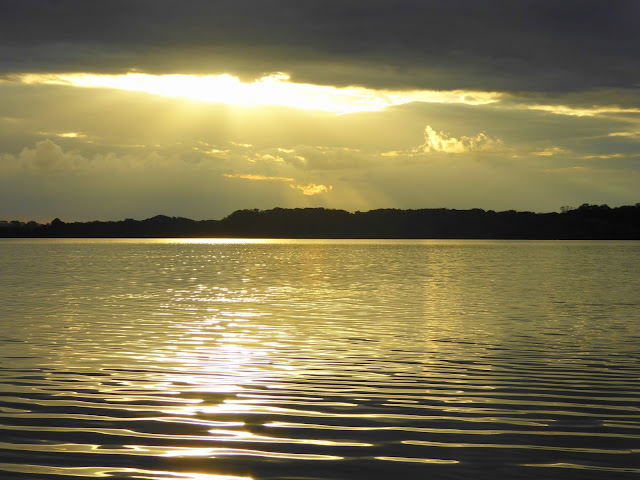 We carried on down the river and caught site of some capuchin monkeys up in the trees. These mischievous fellas were fun to watch from a distance and it was a good introduction to the nature that followed. Our first sunset of the tour was enjoyed from the boat with the luscious trees in the background. More impressive than the beautiful colours were the pink and grey dolphins that came close to the boat during the sunset. These freshwater dolphins have two types of sonar, one for day and one for night and they eat up to 10kgs of fish a day. The pink dolphin is also the only one that swims backwards. How cool! I did not catch a perfect photo, as they would come up for air for a second before disappearing and re-emerging 15 metres away. The video shows this at the end of the post. Anyway besides not capturing the moment in this fullest fashion, the actual experience was one that will stay with us for years to come. We felt very grateful and privileged to be able to watch a sunset in the Amazon, surrounded by dolphins – a truly magical moment.


The End of Day One 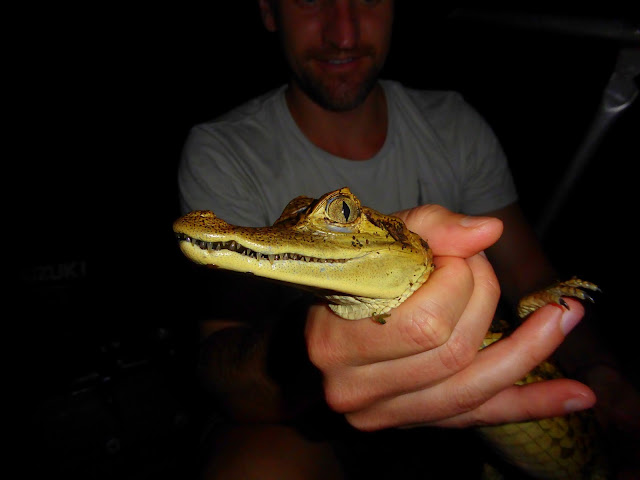 A very action packed day ended with an exciting night time activity – caiman hunting. Caiman are basically alligators, which are basically crocodiles. The method of detecting the creatures was interesting. Our brilliant guide Chitão used his headlamp to scan and find the caiman by the bright orange/red glow from their eyes. When you could see these devil-like red eyes staring at you from across the water, it was somewhat intimidating. And if the detection method was interesting, the way Chitão caught the caiman was unbelievable! He used his feet to hang onto the front of the boat and with each hand he reached out and snatched a caiman by the neck.  He then used his leg strength to pull himself back so people could get selfies with the terrified living fossils. Then the caiman were released and swam away quickly.

I think I’m going to call it a day there without talking about the lodge and our sleeping experience in this wonderful place surrounded by monsters, big and small. Below are the rest of our best photos. There are a good few more posts coming about our time in the jungle so stay tuned. 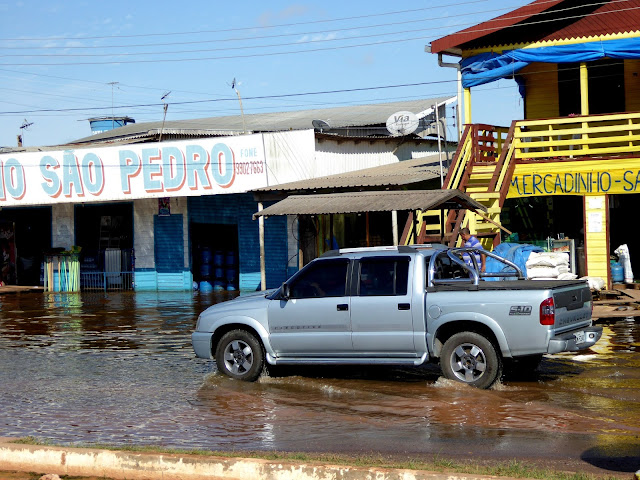 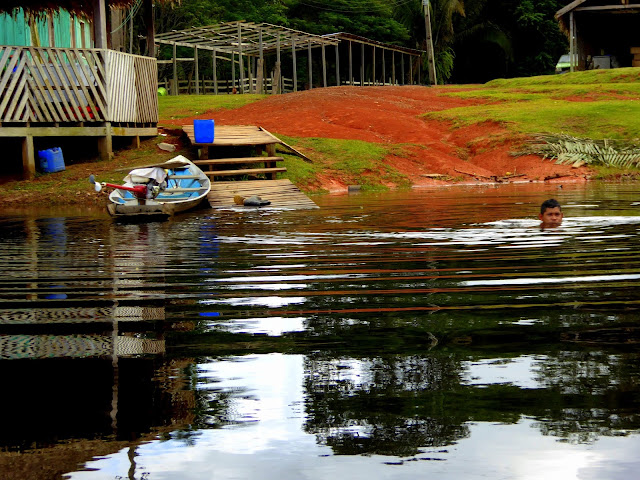 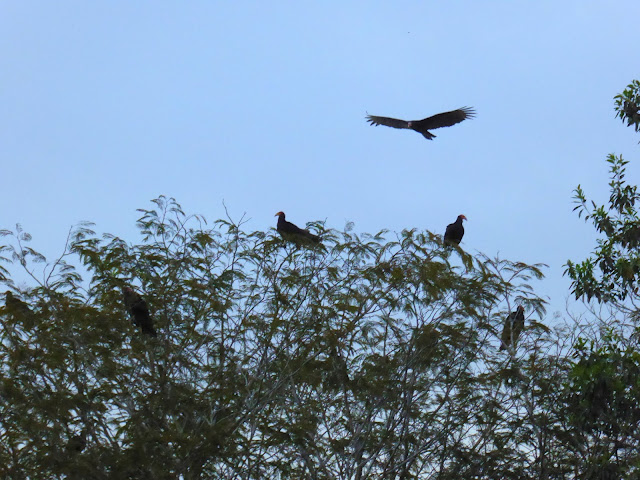 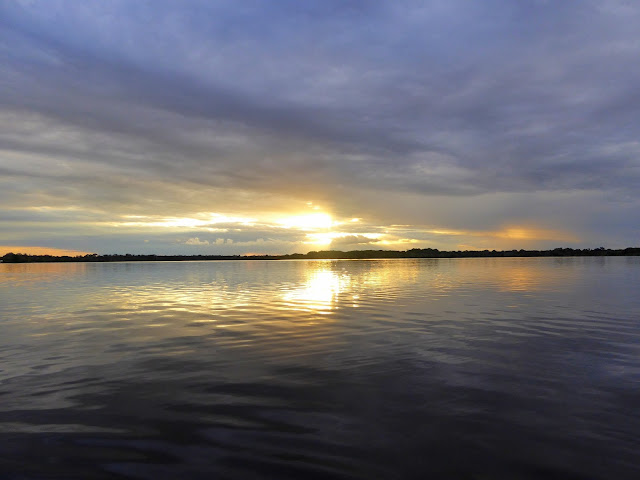