Cameron Highlands - A Place to Forget

Where do we start with the Cameron Highlands? It was an interesting experience to say the least and one that we will probably never forget (Alzheimer’s notwithstanding). We stayed in a town called Tanah Rata and we found a great place to stay (Cameronian Inn), then set about organising the tours and treks we would be doing around the highlands.

The Cameron Highlands is famous in Malaysia for trekking, tea plantations, and the recent discovery of the Rafflesia flower – the world’s largest flower. We decided to pay 60 MYR (£12) each to go on a half day tour to see this flower, which involved a two hour trek, as well as a few other things that can only be described as filler activities. The day of the tour we awoke bright and early, boarded the jeep, and set off at around 9. The jeep was very old, had no seatbelts, and was supposed to be taking us off road. And we were sharing it with Germans. Gulp.

We arrived at a random police checkpoint and our driver stopped the vehicle and called for his boss. We waited for over an hour until another man showed up to drive us through the checkpoint. It became clear that the reason for the delay was that our driver had no license and could not cross the checkpoint legally. At this point, the Germans in the jeep became very angry at the driver and started “what iffing..?” about accidents and insurance etc. We shrugged this negative energy off, as did the driver, and eventually we continued on our cliff side road climb.

A few minutes later, while driving on a flat, straight piece of road, the jeep jumped up in the air and then came crashing down with an almighty screeching noise. We stopped very quickly, thus avoiding going off the cliff, or into a wall, or an oncoming vehicle. When we got out of the jeep, this is what we saw:
The wheel had flown off, with no bump in the road, no reason at all except for bad maintenance, and we had come to a screeching standstill. The driver was fairly apologetic, especially considering the screaming German girls in his ears. We were both pretty shaken up by this but through gritted teeth, and perhaps foolish judgement, we decided to continue. The Germans did not.

We waited for another hour until another old, unreliable, badly maintained jeep turned up. We asked the driver to go slowly and he assured us he would...up to the point where he realised that we were now two hours behind schedule and needed to drive like lightning in order to catch up. Overtaking 4 cars on a blind corner and having to cut back in when an oncoming car approached, he seemed oblivious to the fact we had just been in a fairly scary accident.

We arrived safely though, and were immediately hurried up a hill. The 2 hour trek to the flower seemed very rushed and we really didn’t have the time to enjoy the surrounding jungle.

The bit which was most interesting involved crossing a river where a bridge had recently collapsed. It involved a climb down, a skip across the river, and a slippery climb up.


We arrived at the flower a little worn out from mental anguish... however the flower was fairly spectacular... and LARGE! 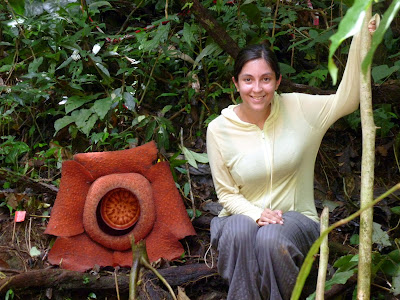 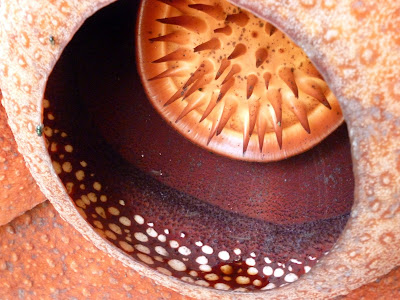 It is supposed to smell like rotting flesh to attract flies and although there were many flies, we didn’t notice the odour (probably due to our own bad BO.)

The hike back down the same trail was of little interest and Katie was stung by a bee which didn’t help. We had to really rush as a thunderstorm was approaching, and we had to pass that river crossing because it would become impossible once the banks got wet.

After the hike e went to an aboriginal village where we practiced blow pipe hunting and saw the tradition huts they lived in (cough). 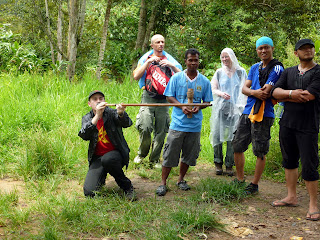 We ended up being driven back by the guy in charge of maintaining the vehicles. He offered no apology and instead only had this to say; “Accidents happen.” This angered both of us, as a wheel flying off a car is not an accident if there is no cause – it is surely bad maintenance. We ended up going to the tour organiser, complaining and getting a full refund.

But the story is not over. Later that evening, one of the tour guides came to our hotel room, banged on the door and demanded to know why we wanted a refund. He was very angry and looked like he might punch me at any moment. He didn’t, but he did storm off. Our hotel owner then drove to the tour company to complain about the guide’s attitude – she had seen the photos and heard our side of the story and fully understood our reason for a refund, as did the tour manager. What a night! The first full day in the Cameron Highlands was finally over... we were alive and just about able to relax.

We had planned a more eventful second day but decided against another organised tour and instead were going to get a taxi to the tea plantations. We went to the best spot to get a taxi and I decided that I would try to hitchhike, as I heard it is very common and easy in this area. I stuck out my thumb and the first car that drove past, stopped. We jumped in and were taken to the tea plantation – bargain!

We sat at the top and enjoyed the rolling hills of the plantation with a cup of local tea. Delightful. 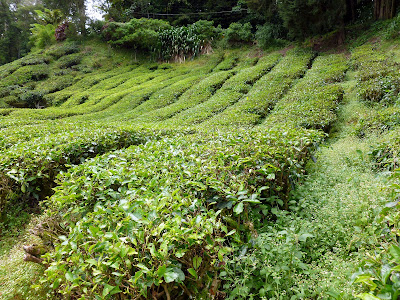 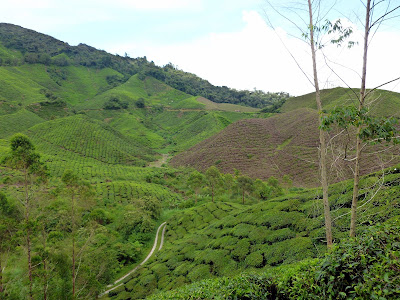 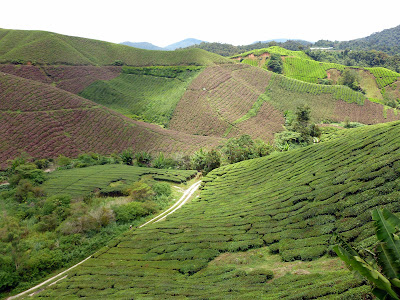 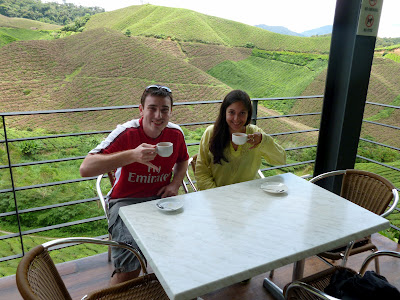 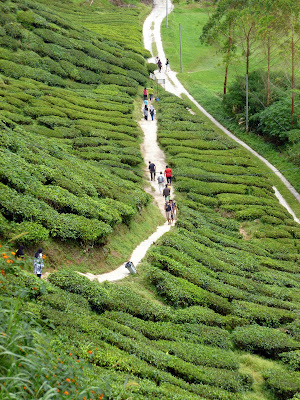 We managed to hitchhike down with the same couple that gave us a lift up. Such a fantastically nice couple from KL (one was a lawyer, one a banker) who gave us so many tips about Malaysia and even bought us lunch. It really made up for the slightly overwhelming first day and reminded us of one of the reasons we travel – to meet locals and make new friends.

We ended the day in our guesthouse with a big plate of scones and some more delicious tea. We were slowly beginning to get back to normal... and maybe, just maybe, we will laugh about all this soon.
Costs (per person)