We were now well rested and ready to begin our adventure on Borneo, starting with a flight to Miri in Sarawak, Malaysia. Borneo is the third biggest island in the world (mainland Britain is ninth) and is divided between three different countries; Malaysia, Indonesia, and Brunei. The shape of these countries is quite strange, especially Brunei which is sliced in half by a strip of Malaysia.


Our first night was spent in Miri, which is one of the main transport hubs in Borneo and nothing particularly interesting happened, besides sharing a dorm with two 7 year old boys and their trainer, who were there for a tennis tournament – a little bizarre. So after one night, we were ready to catch a flight to Mulu Guning National Park.

Now I know I make Indiana Jones references in a lot of our stories but during the trip to Mulu National Park on Borneo, I really did feel like Harrison Ford. It all started with our first ride on a propeller plane (Temple of Doom, anyone?) for an 18 minute flight to the park. 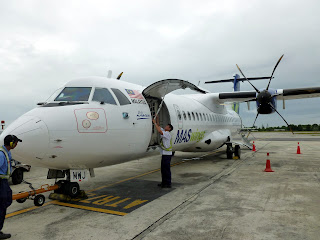 Why fly you ask? There are no roads that cut through this impenetrable rainforest and so the only options to get to the park are an 18 minute flight, or a 10 hour long boat ride that is often delayed and cancelled. The views during this flight were sublime, featuring an incredibly meandering river and never-ending trees, which really got us in the mood for jungle. I would like to add that this was the part of the 5 month trip I was most looking forward to when planning and to say I was excited would be a greater understatement than calling the search for the Holy Grail a boring idea for a film.
What makes Mulu National Park so fantastic is the organisation and accessibility of the trails and caves. You can book everything online (link) and everything is reasonably priced. Even accommodation is reasonable (more on that in a later post). So with our tours booked in advanced, the afternoon started with a visit to Langs Cave. The 45 minute boardwalk trail to the cave was interesting, with our first few sightings of intriguing nature in this million year old rainforest (it existed through the last ice age!) 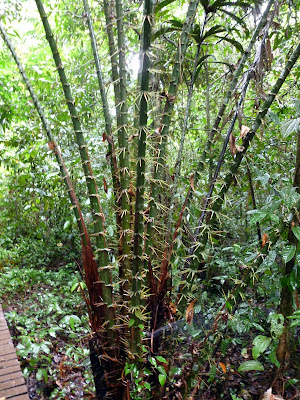 We arrived and our tour guide took us through the cave, which had some really interesting rock formations. We also got our first look at some sleeping bats and some swallows who build their nests just below where the bats sleep, in the same holes. What a lovely coexistence.
After Langs cave, we were guided through Deer Cave, which is officially the largest cave passage in the world (a cave passage being a cave with an opening at both ends).


We entered and were engulfed in this huge opening and it really made everyone feel quite small. 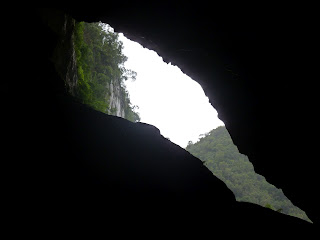 Inside the cave and we were slowly picking up some information from our frankly, lazy tour guide (the only poor guide we had the whole time in Mulu.) Some of you may remember Deer Cave from Planet Earth and the interesting ecosystem that exists within the cave. The ecosystem basically revolves around everything feeding off bats and their guano (poo). The sheer volume of bat crap puts my brother Ben to shame, which is really saying something! The guano has a really distinctive, almost chemical smell, unlike any poo I have smelt before, and it could be a bit overwhelmingly strong at times.
As you can see, there are millions of insects (mainly cockroaches) feeding off this bat guano as well as anything that is unfortunate enough to fall into this muck.
The mounds of bat guano really did stink the place out but we continued to enjoy some of other interesting parts of this cave, such as the apparent face of Abraham Lincoln, which has naturally formed in the rock.
Personally I believe it looks like Louis Theroux, the documentary maker, but I’ll leave you to decide.
This UNESCO World Heritage Site is such because it houses a great example of a roof collapse (I forget the geological term) hundreds of thousands of years ago that was caused by a river that used to run over the cave. This created what is known as the Garden of Eden – an opening sandwiched between two huge caves, that has trees, plants, and animals living there.
Talking of the Garden of Eden, we also happened to see a venomous snake, which apparently was dead but still a little intimidating. We also saw a cat fish, which looked like it had un-evolved eyes due to the eternal darkness of living in a cave.
Our fantastic first day finished with what can only be described as a true marvel of the natural world. Not to over-exaggerate but this is really the most awe-inspiring thing I have ever seen (again, this was on Planet Earth – Episode: Caves.)

Every evening (or so we were told) over 3 million bats leave the confinements of the cave to go on the hunt for food, eating around 15 tonnes of insects (which weighs the same as about 20 very large horses!) The first night we were at Mulu only a few bats left, but on the second night, endless streams of bats poured out of the cave. David Attenborough describes this as an exodus, and I can think of no better use for this word. This is when we realised how so much stinky guano came to be inside Deer Cave. Take a look at some of the incredible photos and videos we took: 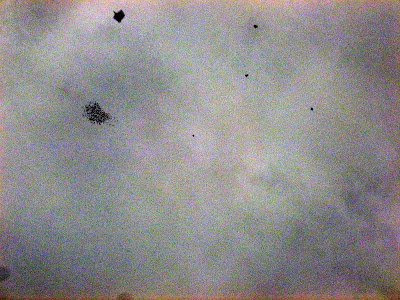 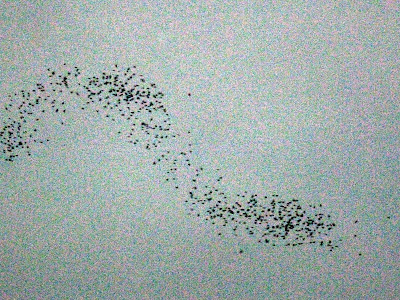 The video shows the snake-like movement of the bats. This is a defence mechanism against those hawks that we saw earlier. It may also be beneficial for wind resistance reasons. 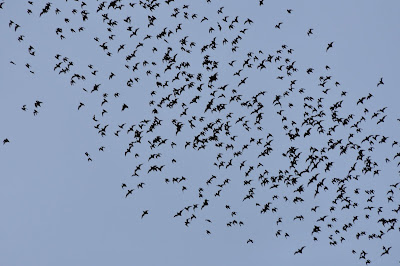 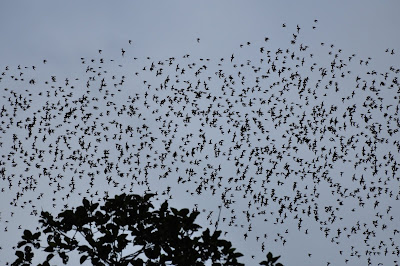 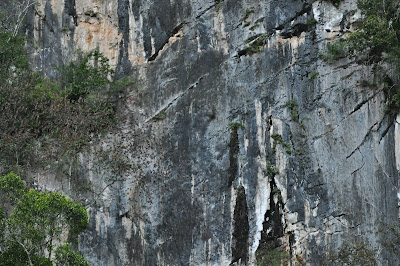 I just want to finish this blog post by saying that the next four posts will be about everything we did in Mulu, including some of the other incredible things we saw, such as the answer to the question of how exactly three million bats can sustain their appetites by eating only insects (I’ll give you a clue – insects can be HUGE!) I hope you had as much fun reading this and we did writing and reliving it! But I doubt it.