After the mouse incident mentioned at the end of the last blog, I managed to pull some David Jewish magic. I complained and said that Katie was incredibly upset by the ordeal, crying into her pillow, although she was surprisingly cheerful, all things considered. I even threw in some BS that I like to write online reviews of all the hostels I stay in… So I blagged us a free upgrade, a discount for the remaining night we were staying, free breakfast and some beers. Considering the lack of sleep the previous night, I thought I did pretty well.
I would like to add that yes, I was very cheerful and this had a lot to do with Dave's reaction when the mouse made its presence known...he made a noise that was somewhere between a squeal and a yelp. It was hilarious. As was the fact that the mouse had clearly been munching on our leftover train snacks while we were out getting dinner, as evident by half eaten biscuits and scattering of droppings. I later had to empty Dave's entire bag, shake everything to check for poo, and then refold and repack it (he was too scared to in case there was another mouse hiding in the clothes!).

What else did we do in Shanghai? Not a lot to be honest, we saw the Bund once more and did a lot of shopping. The discounts and freebies at the hostel actually came in very useful because I spent a lot more money on shopping than I had planned for and ended up
￡
150 over budget - whoops! We also saw a very interesting store-front on the "Oxford Street" of Shanghai. 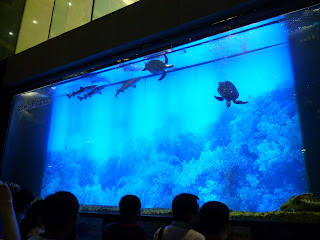 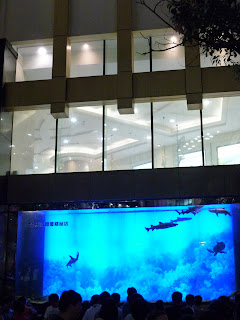 And we saw the cleanest thing in the entire country! 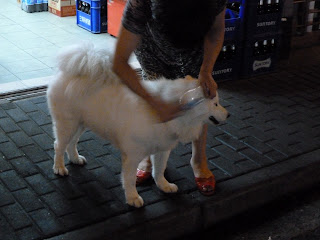 We did have time for one more trip, at the end of our holiday - this time to Hangzhou. Hangzhou is a town 45 minutes away from Shanghai on the world’s fastest train. This train reached speeds of 353 km/h – a record for the holiday!
The town is a popular Chinese tourist destination as it has a magnificent lake, which attracts large numbers of mosquitoes. Unfortunately for about the first time this holiday, the weather was not great and it was a bit overcast, spoiling some good views.
It was also unfortunate that I forgot to take the Jungle Juice (aka Dave repellent) and as a result I left with some horrible bites. From the mosquitoes, not Dave.
We did, however, have a tour guide - Matt - who Katie knew from back home.
Big shout out to the Hinckley Massive!
He showed us around all day, which was great of him, and took us to a fantastic restaurant to finish off our trip.
We were down to our last pennies so asked Matt to recommend somewhere cheap. And boy, did he deliver. We ate more food than in the rest of the holiday combined! And it may have been one of our cheapest meals in China. Nice one Binns.
Thanks a lot for the day Matt – it was great fun and we really appreciate the effort.
And so here we are at the end of our holiday...I think the best way to summarise our trip to China is to compare it to an underground rave. It involved a long queue to get into the main attractions and the place was rammo, containing way too many people for health and safety to be happy. People were constantly barging into you and you were never quite sure that the police weren’t about to swoop in and arrest everyone. It was an amazing experience and it seemed to go on forever but by the end of it all, we were very tired and felt like a long hot shower was needed to get all the dirt off.
All in all China felt polluted, dirty and in need of a makeover. It was great fun but I don’t think either of us would like to live there. The people weren’t as friendly as Koreans and it was a right ball ache trying to buy anything, as the haggling aspect, although fun, just gets tiring. The sights were amazing, with the highlights being the Terracotta Army, the Summer Palace and the Bund.
How the hell can you forget to mention The Wall?! Dave you are a disgrace. This was my favourite bit of the trip and I want to go back!!!

Would we recommend China? Hells yes. But be prepared, because it feels less like a holiday and more like an overcrowded adventure...with lots of delicious food along the way...