So back in Beijing, after the wall – we were starving. After seeing the donkey on the wall, it flipped a switch in my mind, so we decided to try some donkey dumplings. They were delicious!
“Where else did you go?” I hear you cry. Well we went to the Summer Palace. This is basically a gigantic park with temples, pagodas, a huge lake and bridges. It was so huge that it wasn't actually rammo, which was nice. Oh yeah, it was also stunningly beautiful and my favourite place in Beijing. We spent about 6 hours in the park and here is a selection of our favourite photos. 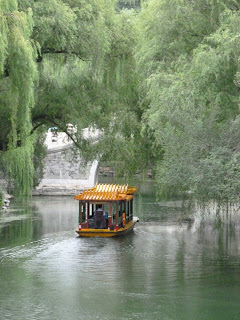 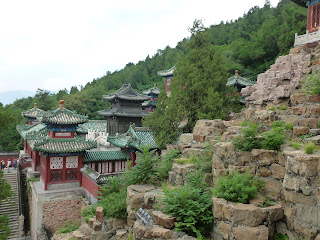 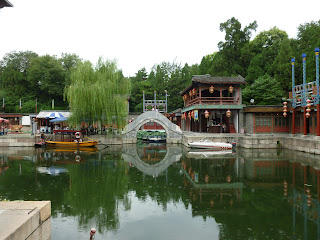 We then had a look at the Beijing Olympics’ site. The bird’s nest stadium was a sight to behold and it seemed to still be drawing in the crowds 3 years after the Olympics. I wonder if East London will have the same appeal? When I think of East London I imagine a Kosovo-like, decimated city but will the Olympics force East London to rise like a phoenix out of the ashes and join the rest of London (ignoring the South) in the 21st century? It's unlikely but I'm sure Boris has it under control.
We saw two more parks in Beijing: Jinshan and Beihai park. Who would have thought we'd see more Parks in China than in Korea?! In Jinshan park Dave got an awesome panoramic photo of the Forbidden City - click the picture to full screen it and be overwhelmed by the size of the temple complex.

We also stumbled upon a butterfly enclosure. 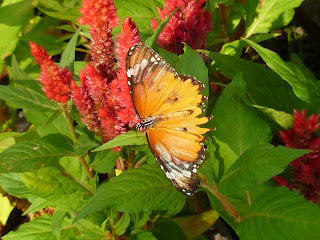 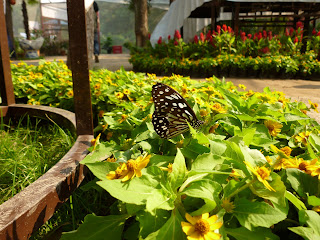 Beihai park had a dragon screen, a lake, a pagoda and a wall of Buddhas. It also had a beautiful temple surrounded by ponds - apparently it's very unique. 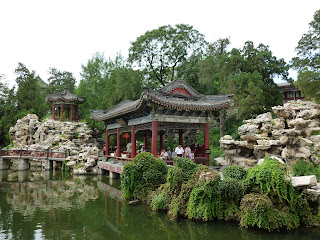 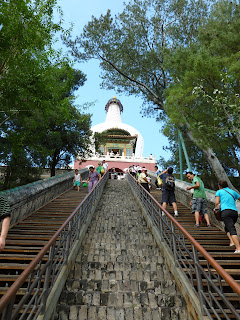 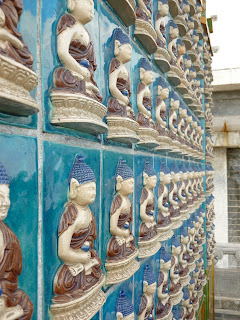 We also went to Beijing zoo and, of course, saw some pandas. They were cute and seemed happy but the rest of the zoo was as disgusting as some of Dave's similes. We saw a man (a fully grown man!) throw a coke bottle at a tiger and numerous people poke crackers through the railings to feed various animals - because everyone knows the important role the great Ryvita tree plays in the African grasslands. The worst, though, was the bear enclosure. It was filthy.
The experience only supported our impression that Chinese people seemingly have little respect for cleanliness and politeness. Maybe it is due to the sheer concentration of people, meaning that you’ll generally have more shit-covered apples than you would in any other country. But our views of Chinese people were conforming to the stereotypes: loud, dirty and rude.


Of course, we had travelled there from Korea, which is very clean and full of generous, friendly, respectful Confucianists, so our view would probably have been different if we had travelled from the scummy, needle-filled, Chav-breeding gutters of our beloved Manchester!
Let’s move on from insulting over a fifth of the world’s population to the next destination - Tiananmen Square. I only know of Tiananmen Square because of the student riots that led to that infamous picture of a young man standing in front of a tank with his arm up. But it was an interesting experience. The largest public square in the world had no shade and in the scorching heat it was a little uncomfortable so we didn’t stay long.
Again I have to wonder if China, in all its wisdom, couldn't have taken the time to install the world's largest gazebo over the square?
There were a lot of CCTV cameras and many military men. Some interesting statues and the surrounding buildings were very communist looking. 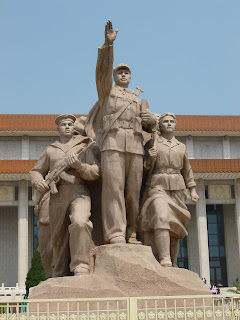 I feel like Tiananmen Square would be an interesting place to hold a flash mob freeze (http://www.youtube.com/watch?v=jwMj3PJDxuo). I wonder how the Chinese police would react – would they start cracking skulls or just ignore it? If they started murdering people like the student riots then at least it might not be as busy in Beijing.
So, we reach the end of Beijing, where the bulk of our holiday was spent. Would I go back? I certainly don’t feel the need to. It’s similar to watching Memento. I loved it but watching it for a second time seems pretty much pointless.
I, on the other hand, would like to go back, but do things in a different order - much like my feelings on watching Memento again.
We boarded a train for Xi’an and sat down in our hard seat where we would be treated to a 12 hour ride. My cunning, perseverance and wallet full of cash managed to get us an upgrade to a sleeper carriage, which was definitely good news. However I had to carry both our huge rucksacks through 13 carriages, which were littered with people asleep / squatting in the aisles. I arrived a hot sweaty mess but would at least be spending the night in the comfort of a narrow sleeper train bed.
As I drifted off, I couldn't help but think of "Namesake", and the train crash, and "The Overcoat"...I realised that the book in my bag was "The Help", and since I can't possibly name my first child Kathryn (and Stockett would just be silly!), I figured there was no way we were going to crash. And so I drifted off to sleep...