As we got off the fast train in Beijing and boarded the subway (using a ticket that was bought for us by a complete stranger), we had our first taste of something that would soon become all too familiar. This experience led us to use a word that has since become synonymous with China in our minds, especially Beijing. Rammo.

rammo / adj - completely and utterly jam-packed and filled to bursting with people.

Not to be mistaken with the all-fighting, gun toting, terrorist killing Stallone character Rambo. One can only understand the true meaning of rammo after visiting a country where a population of seven million constitutes a small town. 1.4 billion is an inconceivable number but when nearly a quarter of our over populated planet is in one country, you get to experience rammo like never before. Packed into the subway like sardines being steamrollered while simultaneously being crushed into a black hole, we were greeted by a drunkard who vomited on the floor right next to us, narrowly missing our bags.
The generosity of a stranger buying us our subway ticket, followed by the vomiting man mere moments apart is like coming home to hear Mila Kunis calling you from your bedroom, only to open your bedroom door and find Meg.
We got to our subway station around midnight and needed to find our hostel. While Shanghai had a modern, somewhat cosmopolitan feel to it, Beijing's atmosphere was slightly more...authentic. This is my attempt at politely saying it's more run-down.

For me Shanghai is like a successful night out on the hunt when you get with a classy bird, while Beijing is the hung-over realisation the morning after that perhaps she wasn’t the supermodel you drunkenly thought she was. In other words, it's grimy...

So as we followed the directions to our hostel, down dark alleys and past red neon signs reading "XX", I did start to feel at home - I went to university in Manchester, remember! Dave was fine, marching on ahead but with my huge backpack on I couldn't help but feel a bit vulnerable. You know the amusing sight of a turtle on its back, trying to flip back over? Well little old me with 15kg on her back would be in a similar predicament!

But we arrived at our brothel, I mean hostel, and had an interesting night of drinking with some sleazy Turkish French man and some students.
Ok so now let’s talk about the sights in Beijing, otherwise this blog is going to turn into a novel:
The Forbidden City
This ancient home to past emperors is smack bang in the middle of the city and is therefore busier than a bee, studying at Oxford, while working nights at a bar to pay for his weekend classes in multi-tasking. The first time there, we went to a garden off to the side and it was calm and relaxing. We got to see soldiers training, which was interesting, and I took loads of pictures of Katie in a rockery. The Chinese seem to love rocks, always giving a receiving them as gifts… very bizarre. 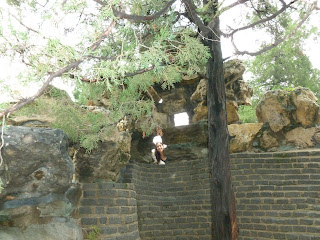 The second day in the Forbidden City, we paid for the main sight seeing part and I had an automatic audio-guide who would shout in my ear for several minutes, rambling on about the significance of every paving stone we passed. The most interesting thing I learnt was that a temple’s holiness is indicated by the number of little animals they have on the roof arch.

Anyway, the Forbidden City was so busy - they kept cramming people in like flumps into a fat boy’s face. It was rammo. Overall we felt that it was beautiful, but ruined by the crowds. It's also HUGE - we didn't look at every nook and cranny but it would have taken at least 5 hours to do so. As it was, we were ready to go after 4. 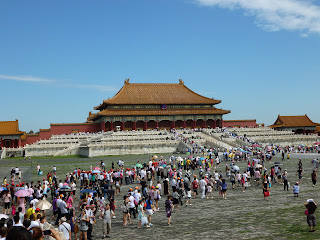 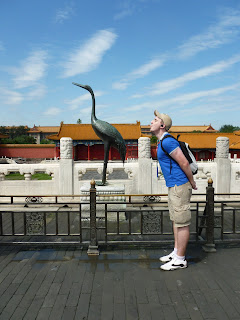 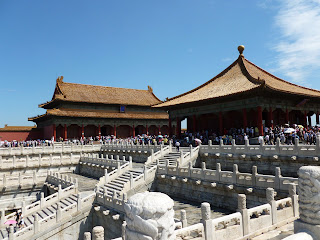 Snack Streets
We then went to the two major snack streets, which were very very interesting. In Asia, they love meat-on-stick and it soon becomes every traveller’s staple snack. But in China, they put all sorts on sticks. We saw snake, live scorpions, silkworms, dog, cat and even sea horse. The first video shows a length of road dedicated to all these culinary treats. We also watched a man make animal shapes using melted sugar and the power of a child’s lungs – see video.
WATCH IN HD - Change resolution by pressing youtube

Hope you enjoyed the videos – see ya soon!