12 hours and a whole lotta terracotta

Right, where were we? Ah yes, we had boarded the train from Beijing to Xi’an and David had successfully acquired us 2 “hard sleeper” beds for the 12 hour, overnight journey. Sadly we have no photos of the carriage but it wasn’t really anything special – each side had 3 bunk beds running up the wall, and once we were settled in we soon drifted off to sleep. Granted, it wasn’t a great night’s sleep for me but I got about 6 hours and before we knew it, it was 9am and we were arriving at our destination.
We dragged our bags off the train and dumped them in the baggage storage of the train station, before hunting down some breakfast. Choices were limited and we eventually decided to do it Chinese-style and get a bowl of beef and noodles from a chain restaurant called “Mr Lee’s”.
We then set about trying to find out how to get to the Terracotta Army. Luckily we bumped into a friendly Argentinean woman who was also heading that way, so we tagged along and boarded a bus to the site. Upon arrival, our new friend asked if we would be interested in joining her to get a tour guide. We explained that we didn’t have the money for it, but she kindly said she’d pay and we could tag along if we wanted. The guide wasn’t up to much, making all manner of claims about Chinese history, such as the fact that they were using chrome on their arrow tips as early as 2000 years ago. Yeh, sure. And I’m sure those plastic chopsticks you found at the bottom of your garden date back to the Ming Dynasty!


Anyway, David had read that the best way to see the 3 “pits” at the site was to do them backwards, therefore ending with the biggest and most impressive. This is a definite must for anyone visiting the Terracotta Army.
I won’t go in to too much detail, as there was quite a lot of repetition in the different buildings, but we made our way through a couple of museums, showing ancient Chinese relics, along side some statues from the pits, all of which was very well preserved and did add a little doubt in our minds as to the accuracy of the dates being displayed. However, we were very impressed by the detail on the soldiers and archers, and got some good close-up pictures to show you. 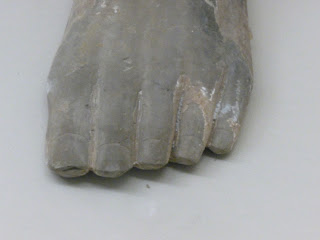 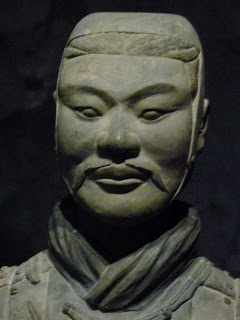 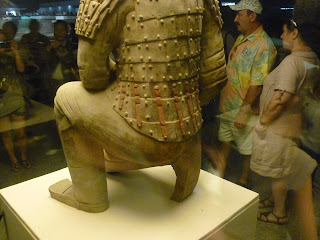 We saw a terracotta horse and carriage, archer, stable boy, gardener swan, helmet and armour, and discovered that along with all the statues, real animals were buried in the tombs, so that the Emperor’s family would have a beautiful garden to play in once they died. It was all quite strange.
There is little doubt that the terracotta army is an incredible human achievement. The statues were discovered in the 1970s and currently around 9000 have been excavated but there are hundred more to be found and restored. The emperor made thousands of slaves carve out the warriors (no two are identical… apparently – in my eyes, a lot looked the same!). The stone statues were buried underground so they escaped the eroding forces of nature. After the slaves completed their work, they were murdered and buried, along with hundreds of animals, in the tomb they had made to hide the knowledge of its creation. I wonder if the emperor then murdered the murderers to hide the murder of thousands of people. Would he continue to murder everyone until there was no-one left?? The emperor strikes me as an evil task driver, much like one of my co-workers. Regardless, the incredible site is arguably the most interesting archaeological discovery of all time.

After the museums we moved on to the “pits”. These are the underground rooms that have been excavated and where the army was discovered. We started with the smallest, as planned, and this was mostly filled with broken statues of soldiers and horses. The size of the pit was impressive, but the content wasn’t that great…until I started to notice the faces. It was really eerie, seeing all of these broken faces staring up at me from the bottom of the pit, all mixed in with arms and feet…
Then it was on to the next pit – this one actually had some whole statues in and we started to get a sense of that it was all about. There were quite a few headless ones, but regardless they looked really real, standing down there with their horses. 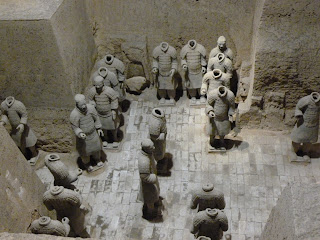 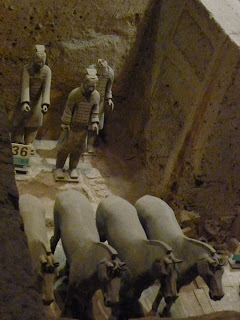 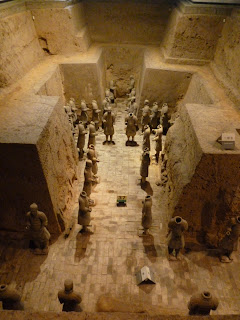 This was nothing compared with the final pit though. If we had done pit 1 first, the rest of the buildings and pits would have been a let-down, but saving the best until last meant we had slowly worked ourselves up for this spectacular sight. The pit was huge – 230x62 metres according to wiki and it houses over 6,000 soldiers and horses. It was very intimidating and we couldn’t help but think about what would happen if they all suddenly came to life. I wouldn’t mind watching a low-budget horrow film about that actually.
Fortunately, the day we went was quiet (by Chinese standards) so we didn’t have to wait for long to get a view and some pictures from the balcony but sadly, we simply couldn’t capture the overwhelming size of it all. 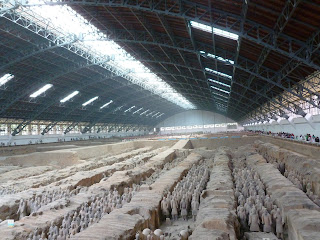 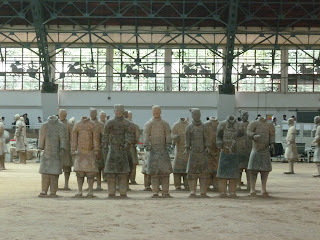 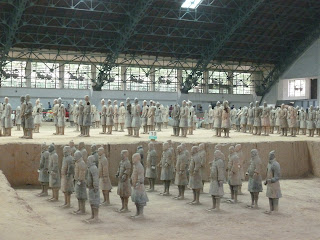 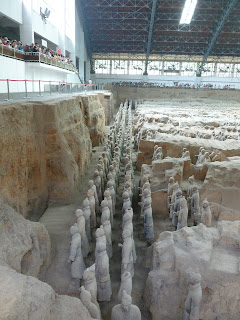 What I think you will notice, from the photos, is that the terracotta that they are made from is not the burnt orange colour that we usually associate with the material…they were more of a grey colour. What you also may not know is that they were originally painted to look much more realistic, but apparently upon opening the tombs, the oxygen reacted with the paint and made it disappear. Or so they say.

My theory is that in the 1800s, the Chinese (ahead of the rest of us of course) realised that tourism was going to be a big money maker. So they made this site to bring in the bucks. The reason I have drawn this conclusion is that it is just an incredible site. I doubt the museums in Egypt will be as impressive as this… But if you hang around for long enough, we might make it there and write a comparison :).

Here is a short video in pit 3 where I attempt (badly) to show the scale of the pit. You can watch it in HD if you click on 360p and select a higher resolution.

Needless to say, it was an amazing experience and definitely worth the 12 hour train ride to get there. But would it still be worth it after the 16 hour journey back to ? Having been in for a mere 12 hours, we boarded another train but this time, disaster struck! We were unable to upgrade our seats to sleepers! What’s more, our seats weren’t next to each other! Fortunately a very kind man swapped with me so that I could sit next to David – but this was little comfort once we stopped to soak in our surroundings…while the first train had been relatively new and clean, akin to an Arriva Trains Wales experience, this one was…much more Chinese. The carpet that lined the aisle had a distinct wet dog aroma, which mingled horribly with the cigarette smoke that constantly lingered in the air. As I stared down at the offending rug, I noticed that it was decorated with a sprinkling of crumbs, and studded with discarded chicken bones. But I wouldn’t have to stare at this disgusting floor for long, because it soon became covered in people – standing, squatting, sitting and, as the night drew on, lying in the aisle, for the entire 16 hours. Words cannot express how uncomfortable it was trying to sleep – so we didn’t. Towards the end of the journey a family boarded and squashed in opposite us…with a tiny tank containing 2 turtles. I did think I was hallucinating this, but we have photographic evidence that it did actually happen.
So, after arriving in an hour later than scheduled, we dragged ourselves back to the hostel that we had stayed in at the very start of our trip. This time our room was on the next floor up, which was still being renovated, but we didn’t care – we dumped our bags, peeled off our disgusting, train-smelling clothes, had much needed showers, and then headed out for some food. It wasn’t long until we were back at the hostel, exhausted, snuggled up on the bottom of our double bunk-bed, watching a very intense BBC drama, and trying to forget about the horrors of the night before.
Then a mouse ran up the bedpost.