On Sunday, we returned from our holiday to China and we haven’t looked back… until now! The next few blogs will try and summate our 15 night epic adventure. So sit back, relax and fasten your seatbelts because as with most holidays - ours started with a flight.
Shanghai is two hours from Busan and I have to say that I do not like two hour flights. I feel like they are a waste. Not because of the CO2 but the fact that you end up spending more time in an airport than you actually do on a plane. I feel cheated. I paid for a flight, not to sit in an airport lounge that could be any airport lounge in the world. Anyway after taking off, we got our meal, then were landing before I had finished chewing.
We travelled to Shanghai centre on the Maglev – the world’s fastest train. It didn’t reach its max speed however, but wikipedia assures me that the line is the fastest line in the world. We got as high as 301 km/h and it took 8 minutes to travel the 30 km. Please calculate the average speed and write it in the comments (show working). 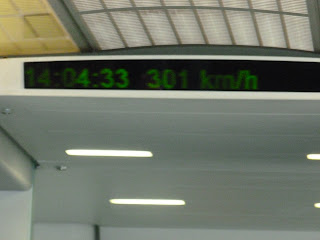 Upon arriving in Shanghai proper, the first strange thing I noticed were the x-ray machines in the subway. Subways are pretty much the same everywhere but imagine people in Brixton putting their bags through the scanner? Yeah right! How about Brooklyn? No way girlfriend!
We carried our very heavy bags to Blue Mountain hostel in East Nanjing where we would be spending our first night in Shanghai. We were greeted by a sign saying there would be no running water from 8am to 8pm the following day because they were doing their yearly clean of the septic tank for the whole building… Dave immediately started worrying about where he would do his morning poo.
I was immediately worried about where I would do my morning poo. But apart from the lack of running water, the hostel was comfortable, clean, reasonably priced (20 pounds for a double room) with free wifi and a good atmosphere in the bar / lounge / beach party area. After we dropped our bags in the room, the friendly and helpful staff pointed us in the right direction to buy train tickets.
After an ordeal involving communication problems and me mistaking a woman for a man (not the first time :o), we booked a high speed train to Beijing for the following evening. With the most difficult part (or so we thought) of the holiday dealt with (booking trains in China gets everyone as confused as my great aunt with Alzheimer’s), we could finally relax.
We then had our first proper meal in China. We ordered a beef dish, which arrived after 10 minutes and was stone warm. We also ordered chicken / bones which came 15 minutes after the beef, and was followed 10 minutes later by the rice. Food in China arrives like buses should arrive in the UK – every 10 to 15 mins, not like buses actually arrive in the UK – all at once.


I know a few of you reading this will be shocked and appalled at the lack of detail in Dave's description of that meal, but fear not! I will be satisfying all of your curiosity soon enough with my very own feature, dedicated entirely to the Grossman-esque rambling ponderfication, descriptifation, regurgitation and photographation of the many culinary delights we enjoyed over the two weeks. So stay tuned!
We then went to the Bund and took some (50+ more like, with his new camera!) standard touristy but still impressive photos. The Bund really was a sight to behold, like Halle Berry’s breasts in Swordfish – magnificent, bold, not a let down, and added some colour to the evening. We snacked on our first meat on stick (more bones) and some aubergine on stick. The food was served by a good looking twenty-something man whose shop was 0.5 m2.
He looked as though he might jump out from behind his grill at any second and beat the crap (artistically of course) out of a bunch of troublesome triad members! It was brilliant...in my head. 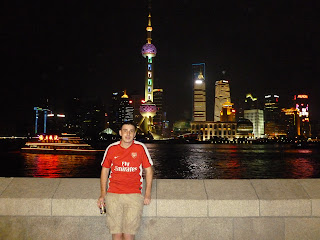 Back in the hostel, we got drunk and bumped into a couple we know from Busan. It took all of 12 hours to randomly meet someone we know (we’re sooooo popular!) I had bet Dave on the flight over that we would meet someone we knew within the first 3 days of our trip...I'm still waiting to get the McDonalds bulgogi burger he owes me...now that is a tasty burger!
The next day we went to the French Concession, which is basically a French / European style area. We had lunch there and I dived into a taste of home – fish and chips. It was incredible, the fish batter melted in my mouth like a kitkat in your pocket.
I, of course, had spag bol and it was deliciously garlicy and cheesy...mmm! 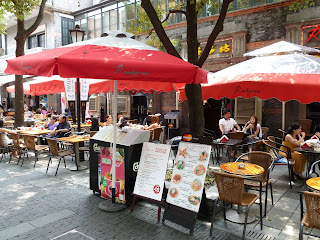 And before we knew it, we were on our train to Beijing – Subway sandwich in hand, ready for our 5 hour train journey (820 miles). As I draft this post in my notebook we are travelling through a storm and lightning has just struck the ground about 300m away. I am worried I might need to use this notepad to clean my pants so if you’re reading this, appreciate the effort and grossness involved with recovering this rambling mess.


I was asleep as Dave didn't wake me to see the storm...he just revelled in telling me about it once I woke up, 5 minutes after we had passed through it. Needless to stay the stormy atmosphere didn't leave the train for a couple more hours!