The Night of San Juan Festival

The festival of San Juan takes place on 23rd June and is celebrated in many countries around the world. According to Wikipedia, it’s a day for recognising the birth of Saint John the Baptist, but in Valencia we were told that it’s a celebration of the start of summer; a time for people to welcome in the new season and to wish for good fortune in the second half of the year.

The festival is celebrated all over Spain in varying ways, but usually involving a bonfire. Along the Mediterranean coast, celebrations take place on the beaches, starting in the evening and continuing well into the next morning. In Valencia, tens of thousands of people set up camp on the many beaches, securing their spots early, and digging large, round pits. These pits soon become fires and shortly after become barbecues.

On our way to the beach we saw people carrying big sacks of wood, and the aroma of smoke and food hit our nostrils the moment we got off the tram. I was unsure what to expect. The last beach party I went to of this scale was the Full Moon Party on Koh Phangan when I was twenty. I imagined this wouldn’t be as crazy…but I was wrong. It was a different type of crazy, but crazy nonetheless. To sum it up succinctly, it was a family friendly Full Moon Party.

The groups that gathered around their fire pits BBQ'd the night away, enjoying the delicious food and each other’s company. There were toddlers and kids running around and going into the sea; drunk youths and older folks alike, all in varying states of disorderliness. Eighteen-year-olds took the opportunity to celebrate the end of exams by burning their unneeded textbooks. Katie even joined some girls and helped them burn their English textbooks. Is that like a priest burning a bible? No, it’s not! Our two guests, Anya and Charlotte, had just finished their A-level exams, so they shared the same sentiment and metaphorically burnt their books that night as well.

Of course there were some fireworks (it's Valencia after all!) and a few little Fallas-like structures being burnt. But the main event of the festival took place at midnight, in the sea. Although people were enjoying the sea the whole night, at the stroke of midnight it got serious. Big groups ran into the sea and jumped over waves, making a wish with each wave. No-one was really sure how many waves to jump over (three, seven, or nine?) so we just made sure we did an odd number and hoped for the best! The Mediterranean is very warm in June and it was refreshing on such a warm, smokey evening.

It was an unusual event and I think the best way to enjoy the festival would be with a big group, a fire pit with food, and hundreds of chilled beers. We had a good time though - the four of us with beer, but not enough food for my liking.

We know better for next year… 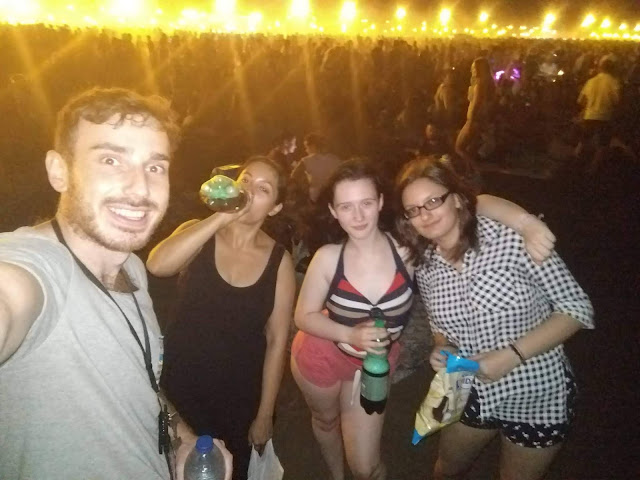