We had planned to spend the summer of 2018 away from Valencia, leaving in mid July and not returning until late August. This worked out perfectly for some friends who had recently quit their jobs and would be travelling around Spain. They wanted to chill in Valencia for a month or so and happily agreed to flat-sit for us.

It was one of those situations that just seemed to work perfectly. We had a bit of crossover time in Valencia with Danny and Nina, during which we had a fantastic Italian meal, and went on a boat ride.

Our friend Vivi, who we met when we first arrived here, is a tour guide and has been using a friend's sailing boat to take tourists out on trips. She very kindly invited a group of her friends on the boat for a day of chilling, drinking, and swimming, and we were lucky enough to make the cut! The day started brilliantly and despite a little bit of chop on the water, it was great fun.

We sailed for about an hour and then set down anchor for a bit. We jumped into the sea, swam like our lives depended on it (because they did) and generally just had a great time bobbing about in the waves. Back on board we ate some excellent cheese and other nibbles, accompanied by lots of wine. And all the while the sea kept getting more turbulent.

One difficulty we had was getting from the sea back onto the boat, because it was rocking like mad, tipping 45 degrees as the waves came in. Getting onboard involved grabbing a ladder as the boat tipped towards you, ensuring the hull didn't smack you in the head as it rocked, and then launching yourself up and out of the water as it tipped back the other way. Not easy.

We eventually decided to call it a day, as darkness approached and the sea ravaged us. It took a while to get back to the safety of the harbour and there were hairy moments that had my amygdala on overdrive. What was supposed to be relaxing day, had turned into an adrenaline filled one, what with the constant fear of being flung from the boat and into the waves at any moment! But it was a great day nonetheless and the fear certainly added something. That being said, I've realised that I'm definitely more of a land person than a sea person…

My biggest takeaway from the experience were the seasickness tablets I had taken before we set off. After my experience on the ferry from the UK to Spain, I knew I was a little sensitive and hadn't got my sea legs yet. But before getting on the little sailing boat we took Biodramina (active ingredients dimenhydrinate) and they worked a treat.

Being an easy sufferer of motion sickness, these pills were unbelievable and I learnt a valuable lesson that day about what an effective drug they are. They're not available in the UK mind, so I'll have to stock up if we ever move back home, especially for that bloody ferry ride.

So for me, as long as I'm learning, I'm happy. I also learnt that the sea doesn’t seem to like me and is trying to kill me. Hopefully this is not a full blown vendetta and the sea can forgive me for whatever misdeed I have carried out. Maybe I should stop peeing in it... 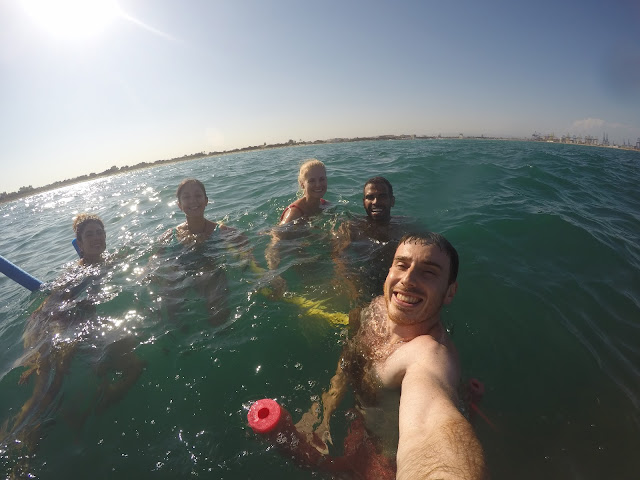