We started our trip in Taiwan by flying into the capital, Taipei. We were couchsurfing with an American called Grant and arrived in the city at around 11pm...We were a little hungry, tired, and very excited at exploring a new country!
Grant's first question after the standard pleasantries was, "Are you hungry?" to which we answered, "Yes!" Grant then said "Let's go to a night market!" Five minutes later, with a beer in each of our hands, we were exploring his local night market. 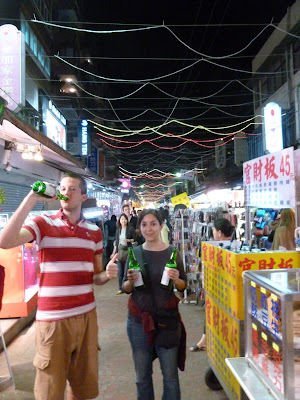 Grant was our perfect host – walking round the market he was constantly pointing at things saying “eat that…try this…oh you HAVE to have one of these…”. So we did. We then got some more food, and then a steak, and then dessert. We ate and we ate until our heart pumped Taiwanese cuisine and our head pounded with a delicious MSG hangover. Afterwards, we decided to get drunk, play basketball and try a local stimulant (similar to a cigarette in strength) called Beetlenut. 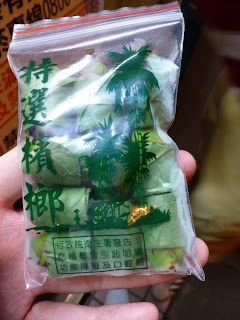 This is a sour, strange plant that you chew and it turns your spit pink – it made me feel a little dizzy.
The next day we awoke, a little worse for wear, and took a stroll through part of the city. We wandered down a busy street full of places to eat and eventually made our way to the Peace Park. It was a beautiful, lush, green park with a few pagodas and other interesting features. It was an oasis in the middle of the bustling metropolis. 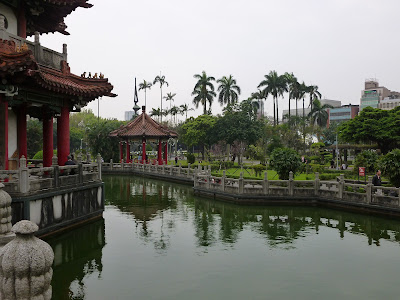 We then headed to a monument, not far from the park. We weren’t sure what to expect and as we entered the grounds we were pleasantly surprised by the surroundings. 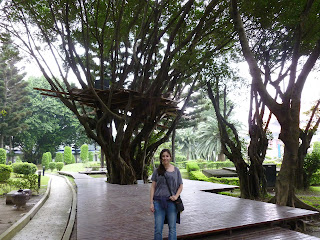 The Chiang Kai Shek (not Shrek) monument is a huge, ostentatious statue, in a huge building at the edge of an equally huge square, with a huge gateway thingy opposite it. It’s huge. 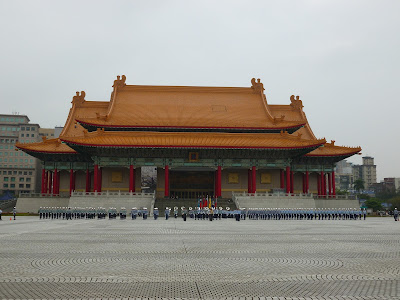 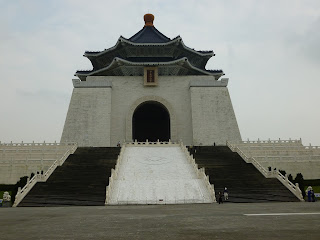 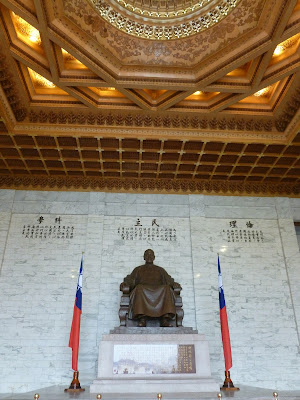 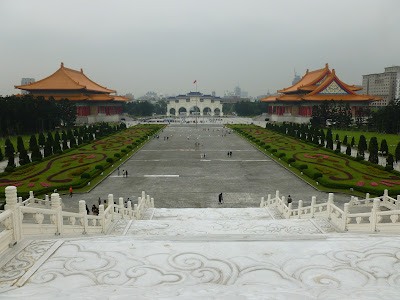 After we were suitably humbled by the…hugeness, we started to wander back to the road and suddenly found ourselves in a beautiful Japanese style garden. I then became fascinated by two birds and we spent ages trying to get the perfect photo of them so Dad can look them up and tell us what they are (please): 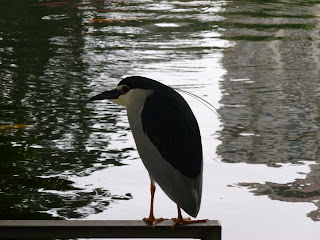 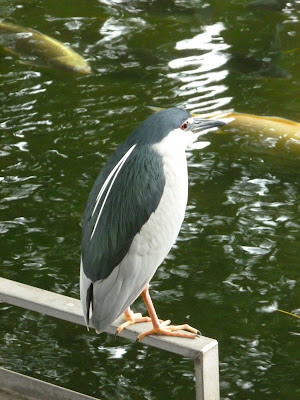 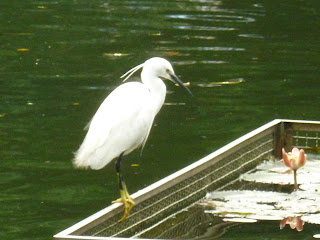 After this we went to the botanical gardens, which were thoroughly underwhelming. Perhaps it was the time of year, or perhaps it just didn’t live up to the Japanese garden we had just seen. Needless to say we didn’t take any interesting pictures.

We then had our first night time temple experience at Longshan Temple. It was an incredible sight and is truly magnificent at night. 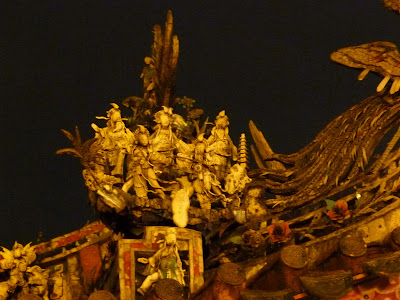 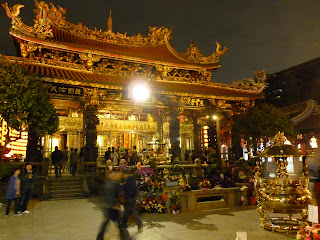 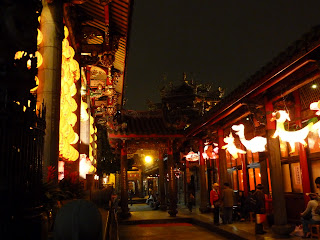 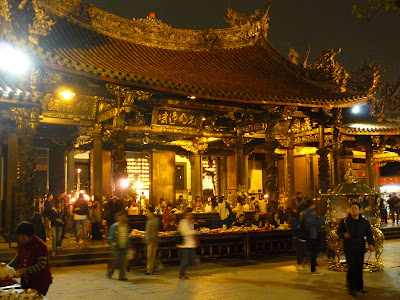 The next day we went on a hike with loads of people from couchsurfing, up the nearby Elephant Mountain. It was slightly cloudy so we didn’t get the best view of Taipei or Taipei 101 (3rd tallest building in the world) but it was an interesting hike with lots of interesting people. 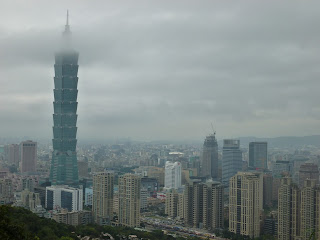 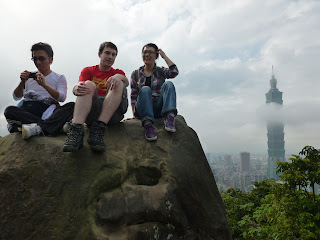 We left Taipei later that day and returned on day 9 (of 137 days of travelling) after visiting Taroko Gorge and Tainan. We did a day trip to a nearby town called Jiufen but sadly during our absence from Taipei the weather had taken a turn for the worse. This meant that the wonderful mountain view was more like a mediocre mountain view but we could tell that when the visibility improved, the view would be well worth it. 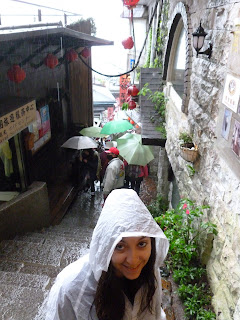 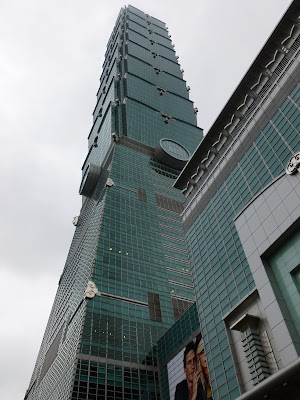 We didn’t go up because of the weather but the view that the hike up Elephant Mountain had already provided us with a good picture of Taipei. £10 seemed a lot to ride 40 seconds at 1010 meters a minute up the world’s fastest lift just to say we’d done it.

That night we went to an awesome club with our new couchsurfer, Jon, who showed us how to party Taipei style. We didn’t take any photos but we all danced our tits off and showed the Taiwanese how to sweat.
On our final day in Taiwan we went to an outdoor hot spring and bathed in the public baths. It was a little crowded (and gross) (and raining) so we didn’t stay for long. However for £1, it was well worth it! 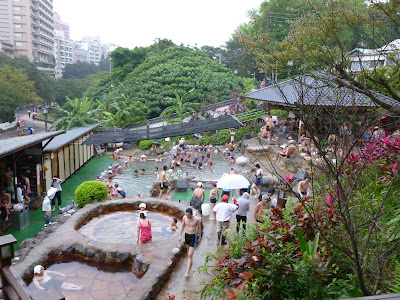 Later we went around Jon’s area, Ximen (pronounced “semen” – lol), looking at some graffiti and finally settled into a huge bowl of ice cream!