"The Scariest Place on Earth"

Once we had packed our bags and said our goodbyes in Busan, we set off on one last Korean adventure. We headed to Seoul, where we couchsurfed in an effort to save a few pennies (so we have more to throw around SE Asia).
We got a bus to the capital and arrived at Kevin The Couchsurfer’s house quite late. We would like to say a special thank you to Kevin for basically letting us have his flat to ourselves for four days. What a nice guy.
Having previously spent three days in Seoul when Dan came to visit, we struggled slightly to find things we wanted to do and see this time. Seoul isn’t exactly full of interesting sights – well, not once you’ve been in Korea for a year. Anyway, we found two things to do: Gyeongbokgung Palace and a visit to the Insa-dong area. The palace was nice enough, but the gardens were pretty dull, what with it being winter and all. We saw the changing of the palace guards though, and were bombarded by out of tune instruments and brightly dressed men. We thought that the palace itself was very similar in design to the Forbidden City in Beijing, minus the truckloads of people and massive expanses of empty space. 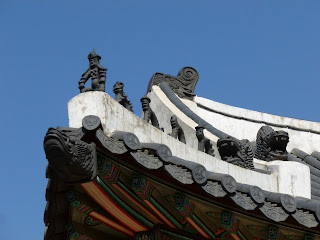 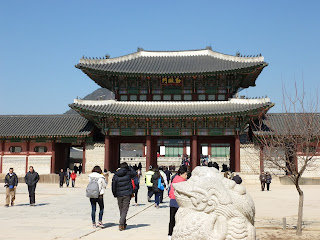 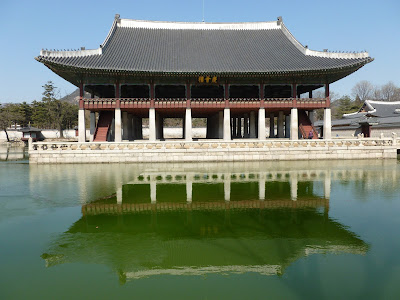 After this pleasant but same-same palace visit we headed to the arty district of Insa-dong, where we had been told we could find a rather unique cafe. You might have heard of cat and dog cafes, where you can go for a coffee and pay a bit extra to stroke something furry, but this one was a little different. After hunting around for half an hour we stumbled upon it’s closed doors. It would seem that the owners of this “Bird Cafe” had gone on holiday, perhaps in search of more exotic flying staff members. Either that or it had been struck by a nasty case of bird flu. Either way, our trip to the Bird Cafe was fruitless (and featherless).


So, day one was over with very little achieved, but day two was going to be much busier, as we had planned a trip up north to the border. We had to be at the hotel (40 minutes away on the subway) at 7am to register for our tour...we awoke at 7:05am and were struck with a sense of dread that was a truly fitting start to the day. After all, we were going to visit somewhere that Bill Clinton once described as “the scariest place on Earth” – the DMZ. We threw on some clothes (“no the colour has faded or holes jeans” as stipulated by the tour company) and grabbed a taxi, making it onto the bus mere seconds before it departed. PHEW! 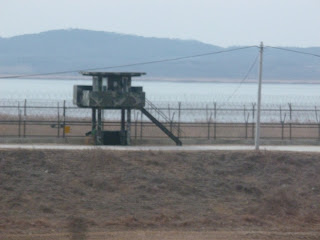 The bus travelled towards our destination with a sense of urgency, while our tour guide gave us a history lesson on what we were about to see (tour company here - Panmunjom tour was the one we did). The bus drove along side two rivers, which flow through both North and South Korea – these rivers are lined with barbed wire and guard posts, on the lookout for North Korean spies. As we drew nearer to the DMZ, the mood in the bus shifted and the atmosphere became tenser and more volatile. We entered the Civilian Control Zone, which only tour groups, soldiers and residents of the zones can enter. From this point onwards, we were told not to take any photos unless directed otherwise by one of the soldiers who were now watching our every move.

The DMZ, or Demilitarised Zone, is a strip of Korea 4km wide, that runs along the entire width of the Korean peninsula. The North controls the northern 2km of the DMZ while the UN controls the southern 2km. South Korea does not control the southern section because, interestingly, it refused to sign the amnesty, so the UN stepped in and signed it for them, hence they remain in control. The DMZ is the most heavily fortified border and contains most of the world’s landmines. Through the middle of the DMZ runs the MDL (Military Demarcation Line) which marks the official border between the two countries. There are, however, roads between the two sides, and one shared location called the “Joint Security Area”. The JSA is a group of buildings where the two sides come together to discuss all things Kim. 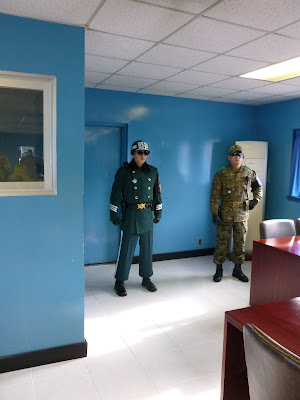 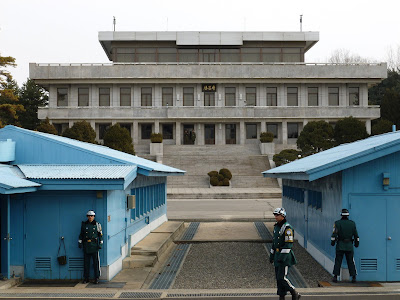 We were lucky enough to visit this area and under strict observation by both North and UN guards, we entered one of the only rooms to exist on both sides of the border. Upon entering the JSA, our guide told us we were free to cross the border into the North, as long as we didn’t mind staying. This room was the only place in which we could technically stand in North Korea, without any oppressive consequences.

We were whisked away from the JSA after only a few minutes, and before we knew it we were standing in the middle of a gift shop, wondering if the DMZ shot glasses were a suitable souvenir, or whether we were better off going for the commemorative spoon collection.


Here is what we actually bought:
North Korean blueberry wine – you can taste the propaganda and false hope.