We awoke in Hiroshima and with the dark clouds and hurried rain we were wondering why we had decided to come here in the first place. I love a good history lesson as much as the next Mr Hughes (my history teacher) but walking around peace parks in the peaceing rain might be a bit much.


Luckily the rain quietened down and we began to explore the city, which is now a small beacon of hope in a world full of governments seemingly determined to destroy us all with nuclear weapons. Perhaps the pathetic fallacy would suit the day after all. 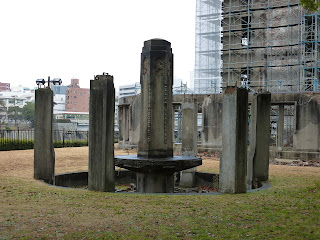 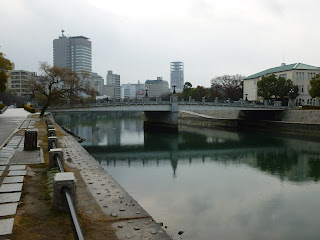 First stop was the atomic dome – one of the only buildings that had partially survived the A-bomb. It was undergoing tests to make sure it wouldn’t collapse, hence all the scaffolding.

The children’s monument is a dedication to the children who were instantly vaporised or died slower deaths from radiation sickness, which ranges from days of agonising pain to 10 years of fighting and losing to Leukaemia and other cancers. 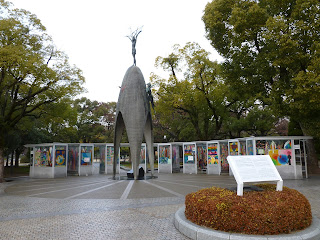 I loved all of the cranes. It's a symbol of hope to make 1000 origami cranes and this monument is filled with tens of thousands. It's beautiful. 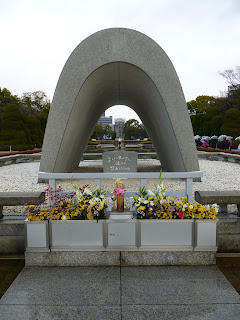 The memorial cenotaph holds all 140,000 names of those killed by the bomb, excluding all the names of people who died of cancer related sickness years later.

We then spent a couple of hours brushing up on our history in the museum. It didn’t gloss over the atrocities that the Japanese had committed, but it certainly didn’t emphasise them. I read nothing about the harsh imprisonment of Allied troops during WWII. However it did mention the Nanking massacre in China where Japanese troops executed an estimated 300,000 people and raped 20,000 women. The Chinese were used for bayonet practice and in “killing competitions” and it really is one of those “conflicts” that makes you realise the brutality of war and in particular, the Japanese.
I got talking to a Japanese volunteer who was in his seventies and spoke very good English. After 10 minutes he mentioned he had been 10 years old when the bomb exploded 1.4km away from him. I suddenly noticed the scars of burns all over the left side of his face. He explained that he was looking at the testing equipment the Americans had dropped by parachute and holding his hand up to block the sun when the bomb detonated. He had burns on that hand and counted himself extremely lucky that he had survived and lived to be as old as he was.
He recalled a story about his dad surviving the aftermath by drinking Sake (rice wine), as it proved to have vital calories and was the only clean source of fluid. Many bomb survivors ended up dying from drinking the black rain that fell following the nuclear attack. One of the most ridiculous, yet very impressive, things we learnt was that the tram system in the city was up and running within 4 days after the disaster – that is truly insane!


I’m all for Nuclear disarmament but I also strongly believe that the Japanese deserved to be bombed and it was the cleanest way to end the war. Note that two days after the first bomb, Japan had still refused to surrender and was trying to solidify a deal in which they would remain a strong threatening power in the region. And then Nagasaki happened and they agreed to an unconditional surrender. The leaders had previously asked for 100 million honourable deaths.

Ok, enough darkness, Let's move onto the next step of our journey, which involved a ferry crossing to Itsukushima where we visited yet another shrine. 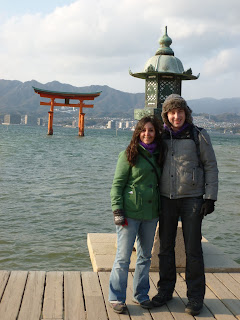 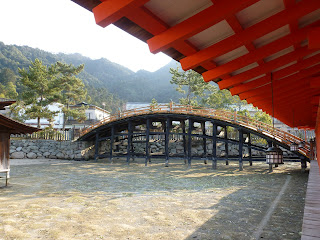 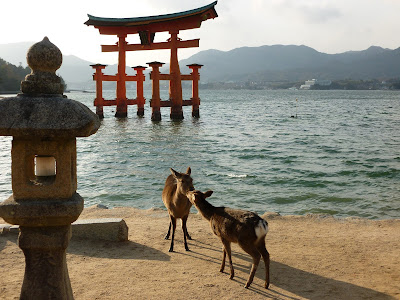 Before we had even managed to say the name of the previous area (Itsukushima), we were back in Fukuoka and back on the ferry to Busan. This time our ferry was during the day, so the facilities were actually open. I took full advantage and had a lovely shower, followed by a relaxing bath. It was really surreal to sit in a bath and see the water and waves outside of the window too. After the bath I had to try and sleep because I started feeling really sea-sick. When we finally arrived back in Busan I couldn't wait to get off the ferry and back onto Korean soil. Our return to Busan marked the start of our final 3 weeks of teaching...and final month in Korea. Blimey...!