Fujisan: Now You See It, Now You Don't

When deciding where to go in the hope of seeing Mt Fuji, we had struggled with the choice between visiting the area of Hakone or the area of the Five Lakes. After much debate and watching of youtube videos showing the views from either area, we settled on the Five Lakes. Getting a 2 hour bus from west Tokyo out to Lake Kawaguchiko treated us to our first proper sight of Japanese life out of a big city. We had some extraordinary views of the countryside from the bus and it was a good change being able to see out the window (unlike the dreaded night buses). As we got closer to Fujisan (Mt Fuji), our excitement mounted (get it?!).
For the first time in Japan we were paying for accommodation and for 5000 Yen (£41), we each got a bed in a dorm in a lovely hostel called “K’s Hostel”. They have several branches in different cities across Japan and were voted by HostelWorld as the “best hostel chain in Asia”. This particular one was voted as the “7th best hostel in Japan”. As you can imagine, it was more like a hotel than a hostel with very helpful staff (who seemed very excited that there was a fireworks display on that night) and a comfortable lounge area.

Being the sociable man I am, I befriended a Geordie called Louise who was to become our travel buddy for the next 24 hours. Coincidentally she was the third neuroscientist we had met this trip and I began to wonder whether this was all a dream or something out of Shutter Island. The paranoia had begun...
Katie, Louise and I headed to another mountain (or did we???) which we would attempt to climb even though it was covered in snow and ice. The hostel staff had told us that it took 20 minutes to climb but there was a slight miscommunication because I would later hear that it takes an hour or longer. With the 20 minute goal in mind, we marched (and slipped) up the mountain so we could get an amazing view of Fuji.
It soon became clear that no-one else was hiking up this mountain and it felt like we traversing Fujisan itself with snow up to our knees. It was then revealed that perhaps we weren’t alone on our trip.
With the girls in survival mode, every branch break or rumbling growling noise was met with a high-pitched outburst of panic (from Dave...remember the mouse in China?). We then came across this: 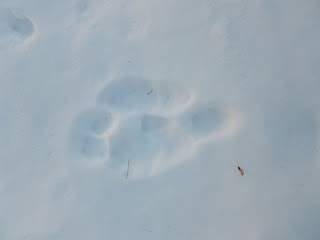 Now at the time we were all fairly certain that no human had made this paw(foot)print and with 3 Brits' knowledge of bear tracks, we were led to the obvious conclusion that a 7 foot tall bear weighing around 20 stone had made this. So we sharply turned round and hurried down the mountain, while deciding which one of us would be killed first based on horror film analogies.
We had been hiking now for over an hour and with Fujisan nowhere to be seen, we concluded that the clouds were covering the mountain and it seemed likely that the peepshow of a performance from the bus may have been our only sighting opportunity. Fujisan is notoriously shy and I counted myself lucky to have had that view from he bus window at all, and made my peace that it would be my only sighting. Until tomorrow of course. But first there were fireworks to be seen. 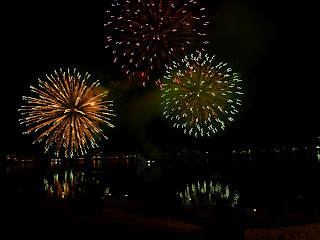 I have now made the decision that I will never take a photo of a firework again. The above photo could literally have been taken anywhere on the planet (with a lake) and who would know??
And let's face it, fireworks are fireworks. I love them more than words can express but I understand that generally they are much of a muchness. Occasionally there might be an extra impressive one but sadly, this was not one of those occasions. For me, what made this display stand out was what happened after the fireworks stopped. Each time the sky returned to darkness, our ears were filled with an amazing rumbling, that seemed to bounce all around us. Being surrounded by mountains created a fantastic echoing effect that I have never experienced before. Well, other than when Dave farts in the bathroom.
The next day we awoke early and a little hungover (I blame the girly mystery drink I was peer pressured into drinking) and we were on a mission to catch a glimpse of Fujisan. We exited the hostel and, looking in the vague direction of Fujisan, nothing could be seen. The sky was partly cloudy and the mammoth of a mountain was not in sight – we were all horribly disappointed. But this huge disappointment was soon to be forgotten as we turned a corner and BAM - there it was – Mt Fuji, Fujisan, and the Paramount logo (sort of…) 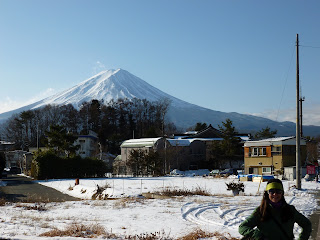 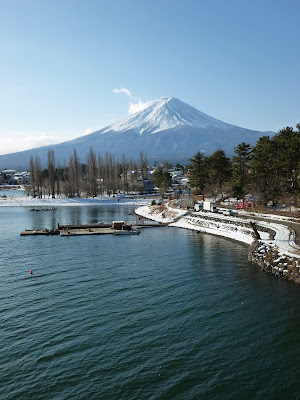 We spent the rest of the day walking around the serene (partially frozen) lake with our cameras. 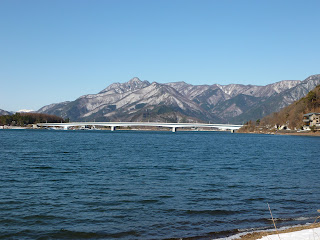 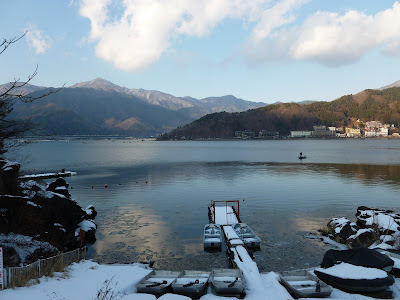 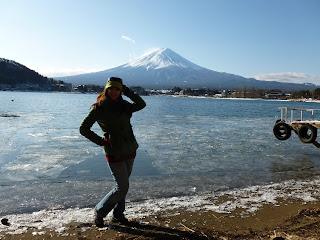 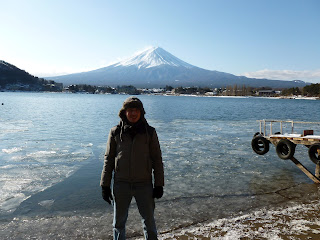 The mountain we had tried to climb the previous day also had a ropeway (cable car) so I swallowed my pride and took full advantage of viewing Fujisan from a higher perspective. 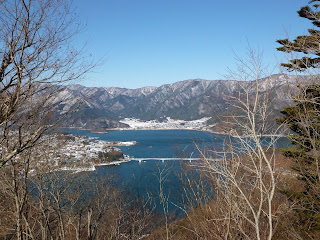 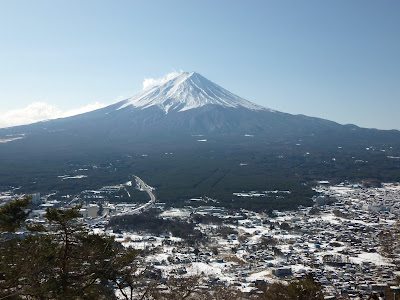 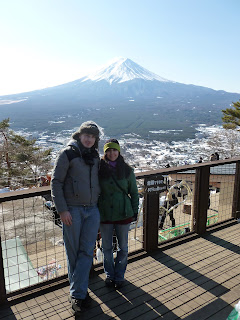 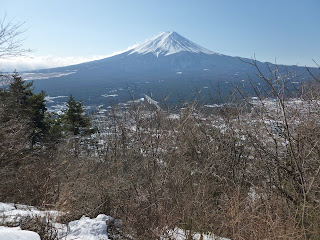 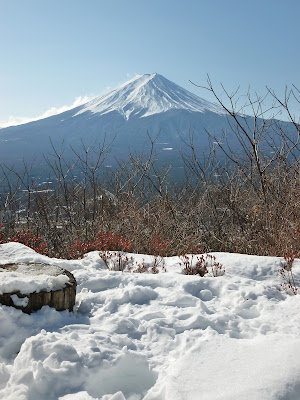 Without a doubt Fujisan was the best thing we saw on this trip – absolutely stunning! Friends that went to the Hakone area a few days before us did not see anything and we are very thankful that we went to the Five Lakes area and that it was the best time of year to see Fujisan.
Before we could catch our breath though, we were back in Tokyo and on a night bus heading to Osaka. Our last 4 nights sleep in Japan would consist of 3 night buses and 1 couchsurf – oh happy days! 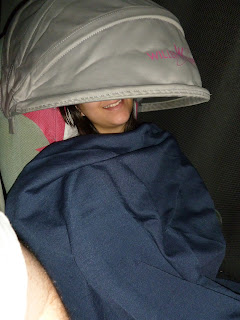