As you may have figured out, Dave and I have started working through our Busan Bucket List because, for those of you who don’t know, we are now in the final few months of our contracts – woooo!


As a result, we recently had two lovely Sundays – one in Igidae and one in Taejongdae. The following is a quick description of each, with lots of pictures!


The first trip was to a small, coastal cliff-hill thing called Igidae. It’s a short bus ride from the Kyungsung University area, followed by a 10 minute walk to the start of the hike.


Once you reach the foot of the hill, it is then a relatively easy up-hill hike for around 45 minutes. Unfortunately, the Sunday on which we decided to tick this off our list followed a Saturday night that had left me feeling…off. So it was a struggle. And I didn’t make it to the top. However, where I stopped had some spectacular views that Dave informs me were only slightly improved by the subsequent 10 minute walk to the peak. Here are some pictures: 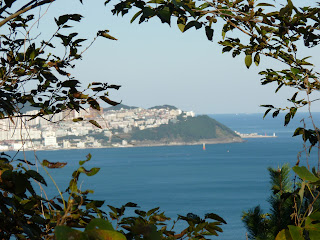 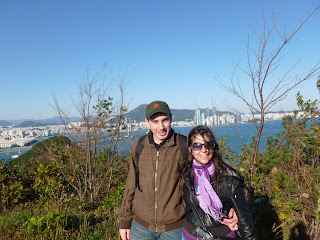 Here is a short video that shows the view in all its glory.


There are some other walks and hikes around the Igidae area that sound lovely, but we have yet to explore them. I would certainly recommend this hike though, especially for anyone who feels that Jangsan is just a bit too much for them.

The following Sunday we took a trip to Taejongdae. This is easy enough to get to – you just have to hop on a bus from Busan Station or Nampo-dong and it’s about 40 minutes drive from there.
We had heard great things about the area of Taejongdae and were excited to see what all the fuss was about. Our understanding was that it was a really pretty, coastal park with a great walking trail. This was not entirely wrong, although I do not believe it was as amazing as people had implied.

Since Dave’s legs were still recovering from his night-hike up Jangsan (which was the Friday night before this), we bought tickets for the small train that goes around the island. This did save us some walking, although none of it would have been difficult.

There were some decent views of the sea and an interesting cliff/rock formation that we walked on but over all I wasn’t blown away. However, we had lovely weather and it was a very pleasant day out.

I will now post lots of photos. Thanks for reading! 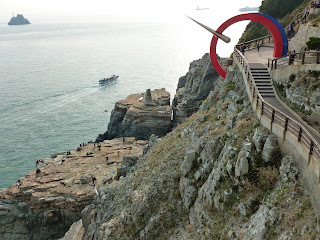 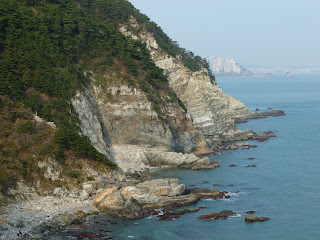 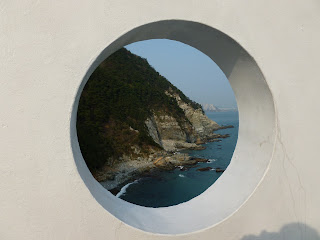