You might recall that in the spring, Katie and I hiked up Jangsan Mountain and got the most spectacular views of Busan. Well it was so spectacular that I decided I would do it again. Last time it was so humid that we were sweating buckets like the guy from Airplane, so this time I decided to hike it at night and it was the opposite. We all froze like Jack Nicholson in the Shining. 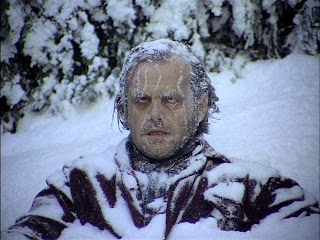 There was no way I was going to go with Dave. I stayed home in my nice warm bed, with wine and a film. I had a great time!There were eight of us who climbed that night, and we did our best to stay warm. 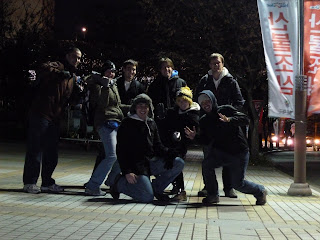 I even brought a thermos flask full of hot chocolate, and then decided that spilling it on my legs would make me even warmer than drinking it would. 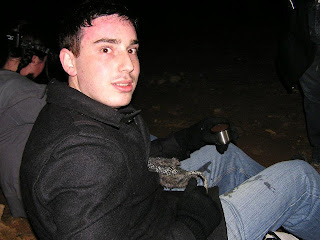 The mine field seemed even more ominous at night time. 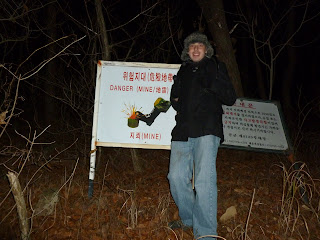 We wanted to hit the peak about 45 mins before sunrise but actually made it to the top 2 hours early. This meant a long wait in the freezing weather and we all got a bit of a chill on. 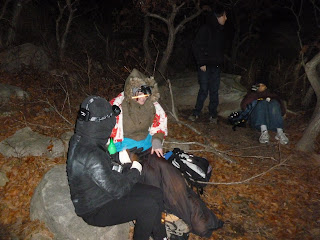 We did get a nice view of Busan at night though – it was just a shame that Gwangan Bridge had turned off its lights at this point.

We waited around in the cold and even walked down the mountain a bit, so we could walk up again in an effort to stay warm. Finally dawn came and we were treated to some breathtaking views. 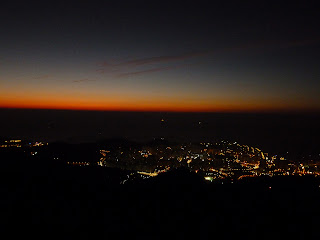 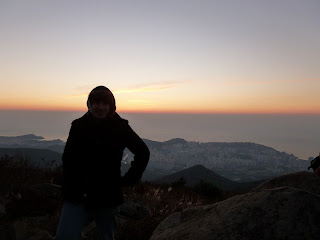 As the Sun was emerging, we were treated to a strange sight for about two minutes where the sun was being reflected off a cloud and then off the water, resulting in a pink rectangular shape in the sea. 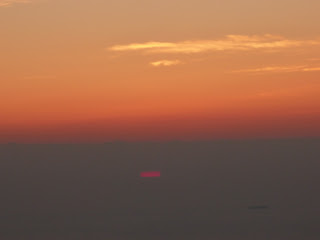 As the real sun emerged, we all started to warm up a bit and the reason we had done this became clear. Some Koreans arrived at this point and one man was shouting at the top of his lungs “Go Home” or a Korean phrase that sounded exactly like that. Either way he managed to slightly damage a beautiful sight with his incessant shouting. 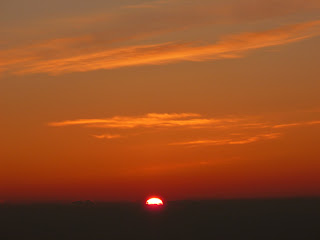 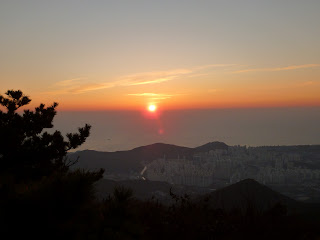 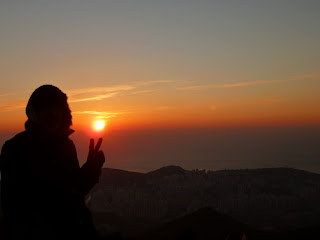 It was a great night hike and a real success. I would recommend this to anyone thinking about it and suggest you leave around 3:30am because the hike took about 2 hours and we were waiting around for far too long. Check out this short video that shows the view in HD.
Finally I got this panoramic of Busan as the Sun was rising in the sky - my fave photo of the lot!