Rio de Janeiro is incredibly famous for its beaches, and there is little wonder why as they are truly sublime. This year the weather has rarely let us down and we've noticed that the average Carioca spends more time on sand than grass. This post reviews some of the wonderful beaches we have visited, giving tips and advice for visiting, as well as hopefully some ideas for when you are next in Rio.

Posto
Pronounced post like in posture rather than postman. Each beach is lined with postos, which are tall lifeguard stations. They are used as location markers along the beaches, and often have toilet and shower facilities (for a fee). We have been told that along the more popular beaches certain postos are frequented by certain groups of people, meaning there is as a family zone and a gay zone etc, although in reality we haven’t really noticed the different "sections" at all.
Quiosque
Pronounced similarly to the English word kiosk. These kiosks sell more than just newspapers and sweets - they are permanent beach stalls that are normally located on the promenade with seating facing the beach. The food and drinks available range dramatically from quiosque to quiosque and beach to beach but you should definitely drink an agua de coco at every available opportunity. Oh and try an açai as well.
Barraca
Nothing to do with the President, as the rr in the middle sounds like a h. So it's more like bahaka. These are the temporary huts on the beach from which you can rent chairs, umbrellas, and  often buy drinks. They are sometimes associated with a quiosque, meaning some can provide food for you right there on the sand. I recommend trying the aimpim (mandioca) frita, which is fried cassava - similar to potato for those who haven't tried it. At the barraca you generally start a tab and then pay for everything when you leave the beach. Be sure to ask in advance if you intend to pay by card, as some only accept cash.
Orla
This is the Brazilian word for the promenade, or boardwalk along the beach. Each major beach in Rio has its own unique pattern on the pavement, following an old Portuguese tradition of making pavements with black and white stones. 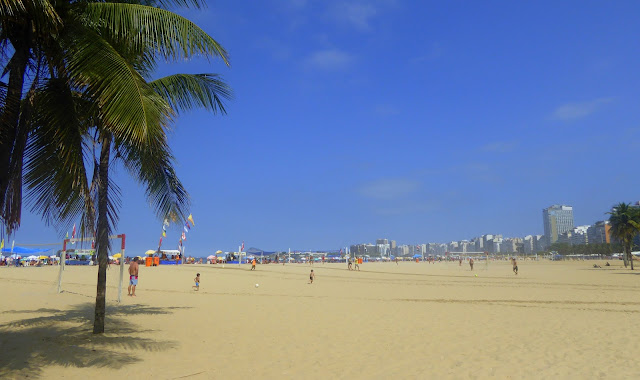 The most famous beach in the world (go on, think of a more famous one!) and for good reason. It is a gorgeous beach with lovely sand and fantastic views of the surrounding mountains, including Pão de Açúcar (Sugarloaf) and Corcovado (with Cristo Redentor on top). The downsides of this beach are the busyness and the safety - we have been warned by our Brazilian friends about the safety issues of the more famous beaches. They recommend not using mobile phones in public and of course not to wearing jewellery or expensive clothes – this should be considered fairly standard practice in all Brazilian cities though, not just these beaches.

Copacabana Rating
Barracas & Quiosque Availability: 5/5 - Bloody excellent variety and quality
Beach Vendors: 2.5/5 - Plenty around but they do give you a bit of hassle
Busyness: 1/5 - Rammo
Cleanliness: 2/5 - Pretty dirty

This beach is right next to Copacabana and is equally as wonderful. My only comment is that the quiosques aren’t to such a high, fancy standard as the ones you find in Copacabana. But then I have found no quiosques that are as nice as Copacabana (except in Fortaleza!). Leblon is also alongside Ipanema and is to a similar standard.

Ipanema Rating
Barracas & Quiosque Availability: 4/5 - Great stuff!
Beach Vendors: 2.5/5 - Plenty around but they do give you a bit of hassle
Busyness: 1/5 - Rammo
Cleanliness: 2/5 - Pretty dirty 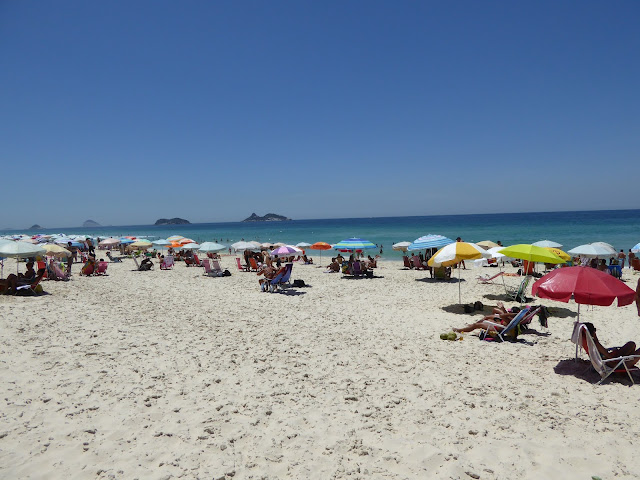 Living in front of the longest beach in Rio has turned me from being grumpy and annoyed about sand getting everywhere, to accepting it for what it is - a permanent reminder of living in such a glorious location. It is a stunning beach and cycling along the dedicated beachfront cycle paths is something every visitor should do. We suggest you use the very cheap Itau bikes (R$10 a month) by downloading the BikeRio App (rather than using the more expensive phone service).

A lot of volleyball is played, as on all of the main beaches, and the quality of these games is very high, making them fun and interesting to watch. The quietest parts of this beach are between posto 8 and 9, which is long a stretch of beach between Barra and Recreio. You need a car to get there though, as the buses don't go that far. For us, Barra beach is our preferred place to be – it's safer and quieter than the Zona Sul beaches but with all the conveniences of the quiosques, chairs, umbrellas etc. Also the sand under my feet is so smooth and there is next to no litter. I love it.

We generally hang out by posto 5 as this is where we live and it’s quieter than some other parts. With the subway soon coming to Barra, I imagine this beach is going to get busier. But it's a great place to visit and the area around posto 2 is really lively so great in the evenings too. The bus 332 goes from Zona Sul all the way to the beach, so it's easy enough to visit even before the subway station is finished. 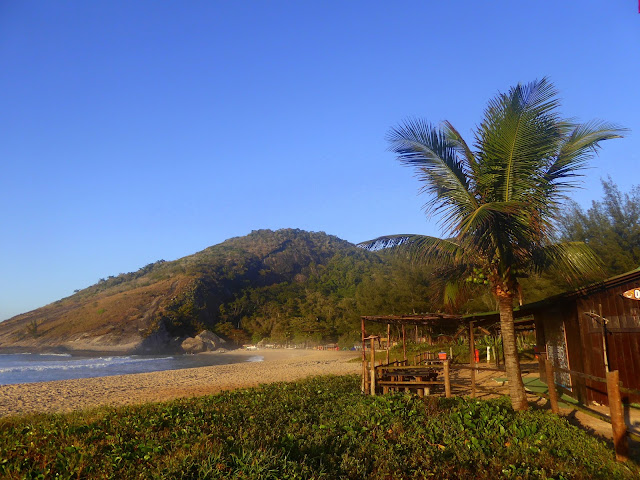 We started out trip to Prainha and Grumari beaches by waking up before sunrise. With weekends rapidly running out and our must-do activities planned in every available moment, we had the arduous task of doing them all. I’m being facetious of course, it was an absolute privilege to wake up and drive to these beaches for sunrise. I had just had my stitches removed after my final wisdom teeth were pulled and we wanted to celebrate in style. My friend recommended a great view point to stop at, on the first hill as you enter Prainha from Recreio, called Mirante do Roncador. It was completely empty and the two of us took in the awesome view of the sun rising over the sleeping giant with only the sound of the crashing waves as company. The experience was truly breathtaking. 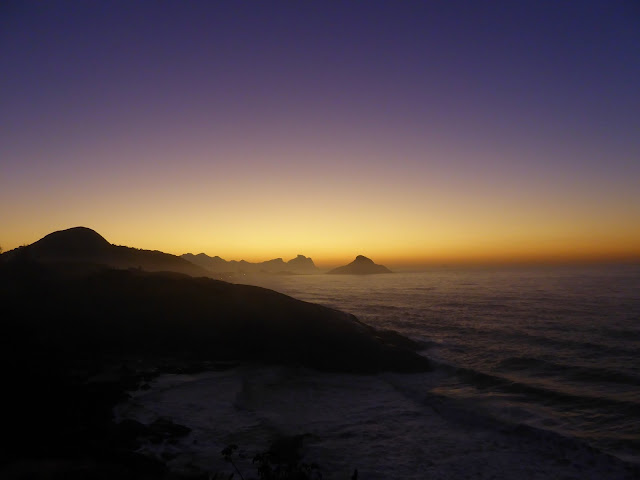 Once we decided we had seen enough of this view, we drove along the coastline, stopping at various points to take it all in. Having a car was proving to be a real delight.

As we got to Grumari at around 6am, the beach was a bit chilly so Katie had a nap in the car. I walked along the beach and soaked up the beauty. It was just me and a few surfers. But it wasn’t too long until the hoody had to come off and swimming trunks and sun cream were put on. I woke Katie up and she made it to the sand before falling asleep in the beach chair. We stayed for a few hours, with me running my toes through the sand, before driving down the coast and stopping for lunch. It was now incredibly busy by Prainha and we couldn’t stop at the restaurant we had first chosen. Grumari was still quite calm and we stopped at a restaurant there with a lovely garden where we saw this hummingbird buzzing around, which was very cool. 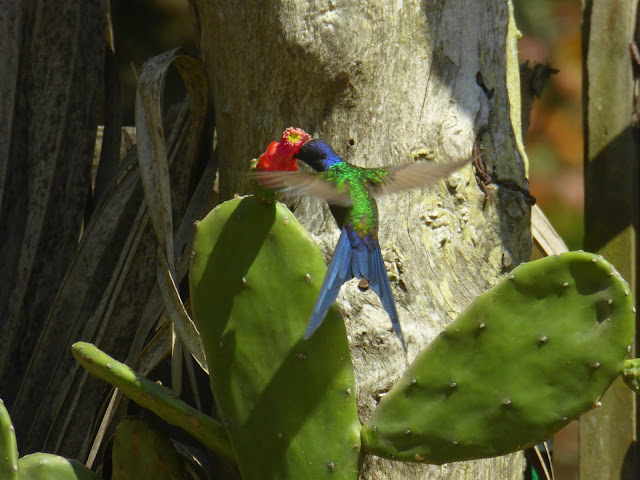 We then drove around the twisty steep roads and eventually came to another area called Barra da Guaratiba. We had planned to explore a beach we had only seen from above as we flew over, with its ridiculously long stretch of sand, but unfortunately it seems like this beach belongs to the military. We stopped at a nearby party beach, which was crazy busy with a loud Brazilian vibe going on. We didn’t stay long but it was another beach ticked off the list of 2095 beaches in Brazil.

We recently went on an adventure along the coast running east from Rio, and during the drive we visited many beaches. We have already written about the drive and the places to stop but it’s impossible to review all the beaches separately. Instead, we will review Geriba beach, which is where we spent the most time compared to the other beaches.