Brazil In My Mouth - April & May

It's the post you've all been waiting for! Yup, fooooooood!

In April and May we ate in a few really good restaurants, so that's mostly what I'm going to tell you about in this post. 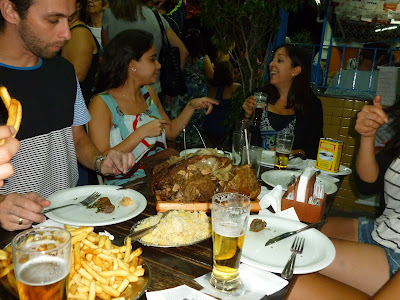 I'm going to start with a restaurant called Cachambeer, which our friend Cris suggested to us. It's in the northern part of Rio city, which is less affluent and has a more down-to-earth feel than the holiday resort bubble we are currently living in. We went there with Cris, our visitors Gary and Sarah and two of their friends who also live here in Rio. The restaurant is famous for two things - freshly smoked beef ribs, and a queue that goes on for miles! Luckily we arrived earlier than the usual Brazilian dinner time so only had to wait for about an hour. 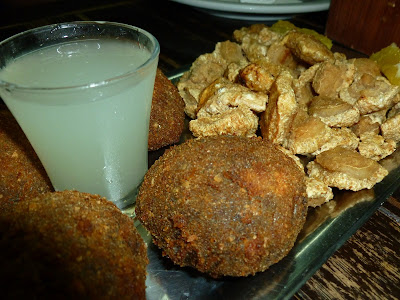 The food was amazing but we ordered way too much. In fact, I still have quite a lot of the leftover beef in the freezer! As you can see in the photo above, the main event came with the usual sides of rice, chips and farofa, but first we couldn't resist a couple of starters. This picture shows some scratchings, a shot of lemon cachaça and some bolinho de feijoada. These are little croquettes made from the elements of a usual feijoada meal. Really delicious and not something I had seen on a menu before. Definitely a great start to the meal. 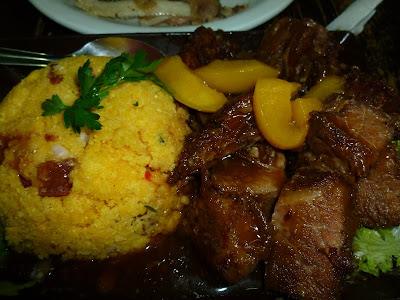 Next up was a portion of short ribs, which were tender and delicious. They were coated in a light but sticky glaze and served with peach slices and yellow couscous. If this had been our main dish I would have been very happy indeed, but as it turns out it paled in comparison to what came next and is the dish we probably shouldn't have ordered, from a quantity point of view. Anyone who goes to this restaurant in a group of 5 or more should ignore everything else on the menu and just get their most famous dish.


Pictured below are the beef ribs. When I have eaten ribs before I've always been given a plate of, at best, 50-50 bones and meat. Here, there were definitely some huge bones but there was also a heck of a lot of meat, way more than any of us expected! The meat was delicious and juicy, but not too oily, with a hint of garlic and lots of slow-cooked onions. My mouth is watering at the memory! Definitely worth the wait and the fact that they smoke the meat onsite not only means it's cooked to perfection, but the constant plume of smoke in the air keeps the mozzies away! 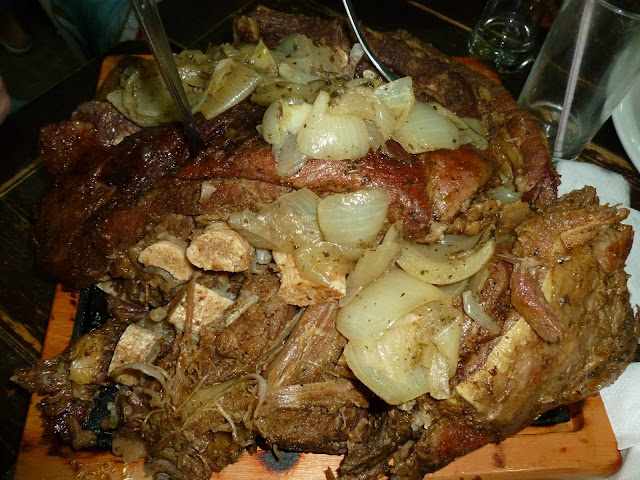 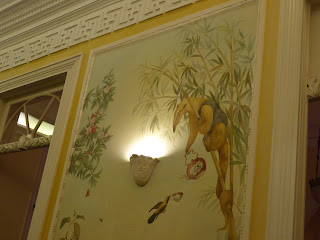 How can we possibly follow that? I know, it's tough. But when we were in Petropolis, we went to a restaurant called Imperatriz Leopoldina and I had the best risotto of my life. Possibly one of the most delicious things I have ever eaten, certainly of the European persuasion anyway. The restaurant is in a really beautiful hotel, and the price of the food was really very reasonably. Oh and the decor in the restaurant was really interesting. On the walls were panels with delicate paintings of wild animals serving tea and having a picnic.


Now, tripadvisor reviews seem a bit hit and miss so maybe we were there on a good day, or perhaps Dave and I just made really smart menu choices but we were both very pleased with our meals. When we arrived we were given a little shot of chilled tomato soup while we decided what to order. Dave went for a beautiful duck dish, with a creamy corn sauce, mashed potato and crispy fried spinach. The duck was cooked perfectly and the presentation, as you can see, was lovely. I also chose a duck dish, and from the description I had no idea what to expect. It was a duck risotto, which in my mind would be creamy and therefore not necessarily that good. But the reality was amazing. The rice was cooked in a rich, deep, flavoursome stock with pieces of dried orange peel that made the dish taste like Christmas. There was a crispy, juicy duck leg nestled on top of the risotto and more duck meat stirred through the dish. It was truly a delight to eat and I don't think I said a word while we ate that wasn't about how amazing my food was! 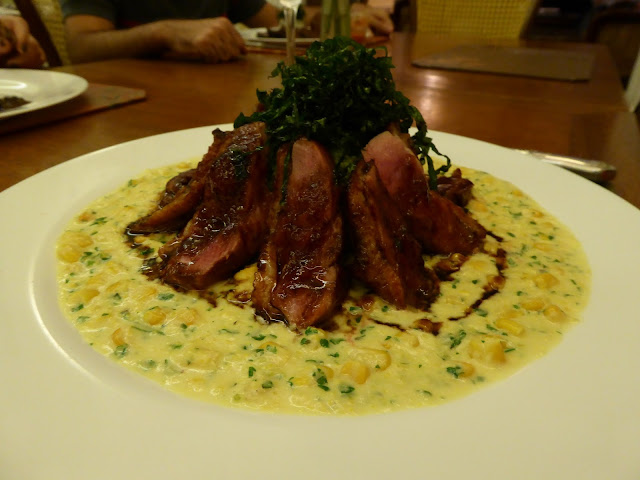 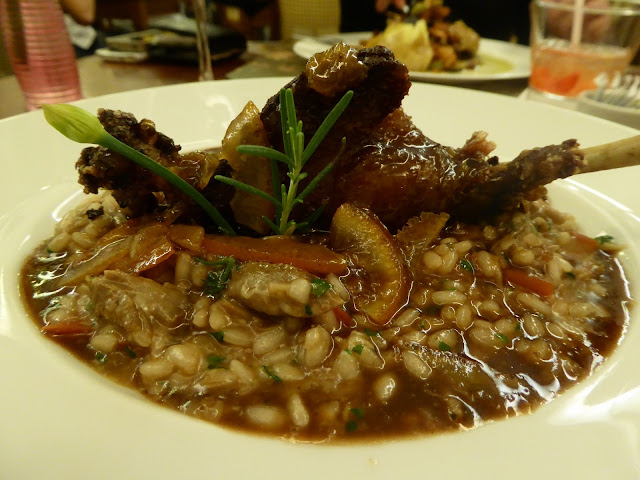 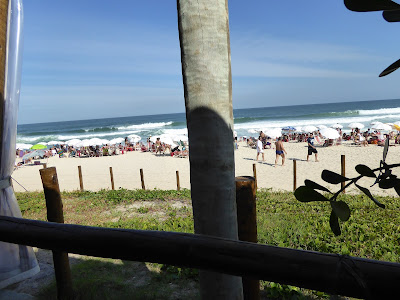 This last restaurant is one we visited during my birthday weekend. We cycled along the beach to a kiosk we had seen on a previous cycling trip. It's called Pesqueiro and is really quite fancy for a kiosk - it's more like an outdoor restaurant. And check out the view from our table! It was a hot day so the beach was busy and there was a live band playing while we ate. We ordered a "namorado" ("boyfriend") fish and it arrived on a platter with fried cassava and a salad. It was a tasty, meaty fish but full of bones. 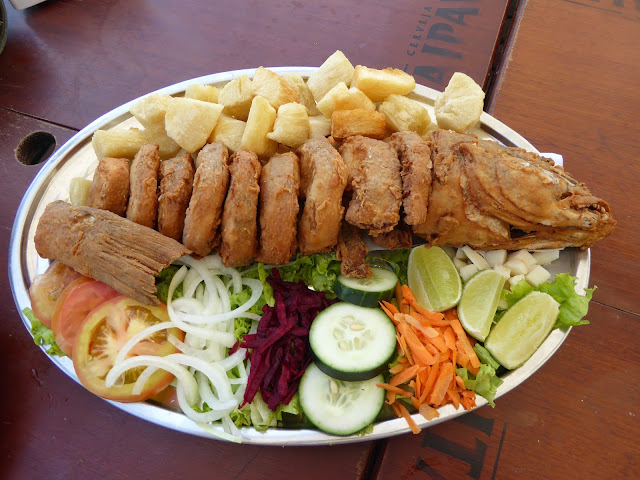 And finally, here are a few noteworthy things we have eaten in not so noteworthy restaurants... 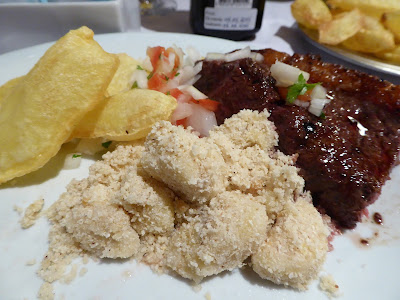 Yup, some more farofa! This time, instead of being mixed with egg, bacon, onions or beans it was used to coat pieces of banana. Bananas is a funny subject to discuss with Brazilians because they have so many types here and we just have one at home...the banana. I have no idea what the different ones are like because I don't eat bananas but I will consult with Dave for an explanation in a later post. Anyway, this was...okay. Not great. But a new way to eat our favourite sandy side dish! 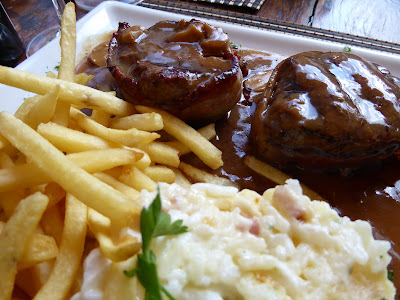 This next one is just another example of the extreme lengths people seem to go to here, to have extra carbs with their meals. Delicious beef medallions, wrapped in bacon in a wonderful madeira sauce, with chips and...a ham and cheese risotto!  Yes it was tasty but where is the veg?! A bit of broccoli would have been a great addition to this meal. Or at the very least a pea or two. It feels like a strange thing to complain about but when we eat out we really do miss the vegetables. 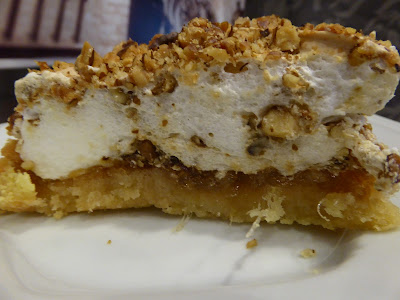 Next up, a pineapple meringue pie with a crunchy nut topping. The meringue was lovely and soft and marshmallowey. The nuts added a nice bit of texture and the pastry bottom was acceptable. But unfortunately there wasn't much of a pineapple flavour going on. Desserts here are very sweet. Sweeter than we are used to and one problem with using so much sugar is that sometimes it overwhelms the flavours. 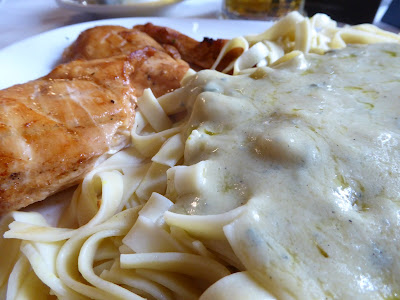 I suppose this one is a bit about the restaurant but not in a good way. Several people had recommended an Italian restaurant in Petropolis, so we decided we ought to go since it seemed so popular. The food was decent enough, with a range of pastas and grilled meats on the menu at reasonable prices and with big portion sizes but the service...the service was atrocious! We must have been in that place for 3 hours just to eat one course each and some self-service antipasti. 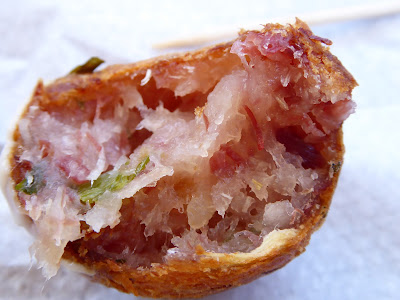 Brazilians love to make food into balls and then deep fry them. You saw an example earlier of the bolinho de feijoada but there are loads of different kinds of bolinho. Generally I would say they are a pretty decent bar snack. Never packed with flavour but I have stopped expecting things to be at this point. This one here is made with carne seca (dried beef) and mandioca / aipim (cassava) and had a good ratio of crunchy to juicy. 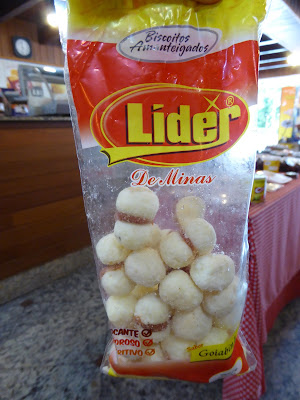 And last but not least (but definitely least) is this little snack Dave picked up in Petropolis. As expected, they were overly sweet and lacking in any distinctive flavour. Two small, powdery biscuit balls that tasted vaguely of Bird's custard powder, with a later of chewy strawberry jam in the middle. We haven't eaten too much in the way of biscuits and dessert here, other than fruit and ice cream but we've sampled a few traditional ones and they definitely all seem to be overly sweet. Obviously it's just a taste thing and we are not used to it, and there are some great desserts here but I can't quite enjoy them as much as I want to without a gallon of water and some crisps to help keep me balanced!