Brazil In My Mouth - February & March

Are you as excited about this as I am?! It's our first food post from Brazil! Below are some of the most memorable things we have eaten in February and March.

Picanha
Picanha is a cut of beef that is popular in Brazil but not well known back home. The dish pictured below is a very typical meal here in Rio. It is often referred to as picanha, although the cut of beef can vary. You can state how you want the meat cooked (rare, medium etc) or it sometimes comes on a hotplate so you can cook it yourself, Korea style! Whatever the cut or cooking method, this delicious, juicy steak always comes with the same sides - chips, rice, a salsa of onion, pepper and tomatoes, and farofa. Farofa (bottom right) is toasted cassava flour. In this picture it is plain, but it often comes mixed with onions or scrambled egg. It has a nutty flavour and the texture of sand. It's really odd and I'm not sure what it adds to the meal but it is quite nice. 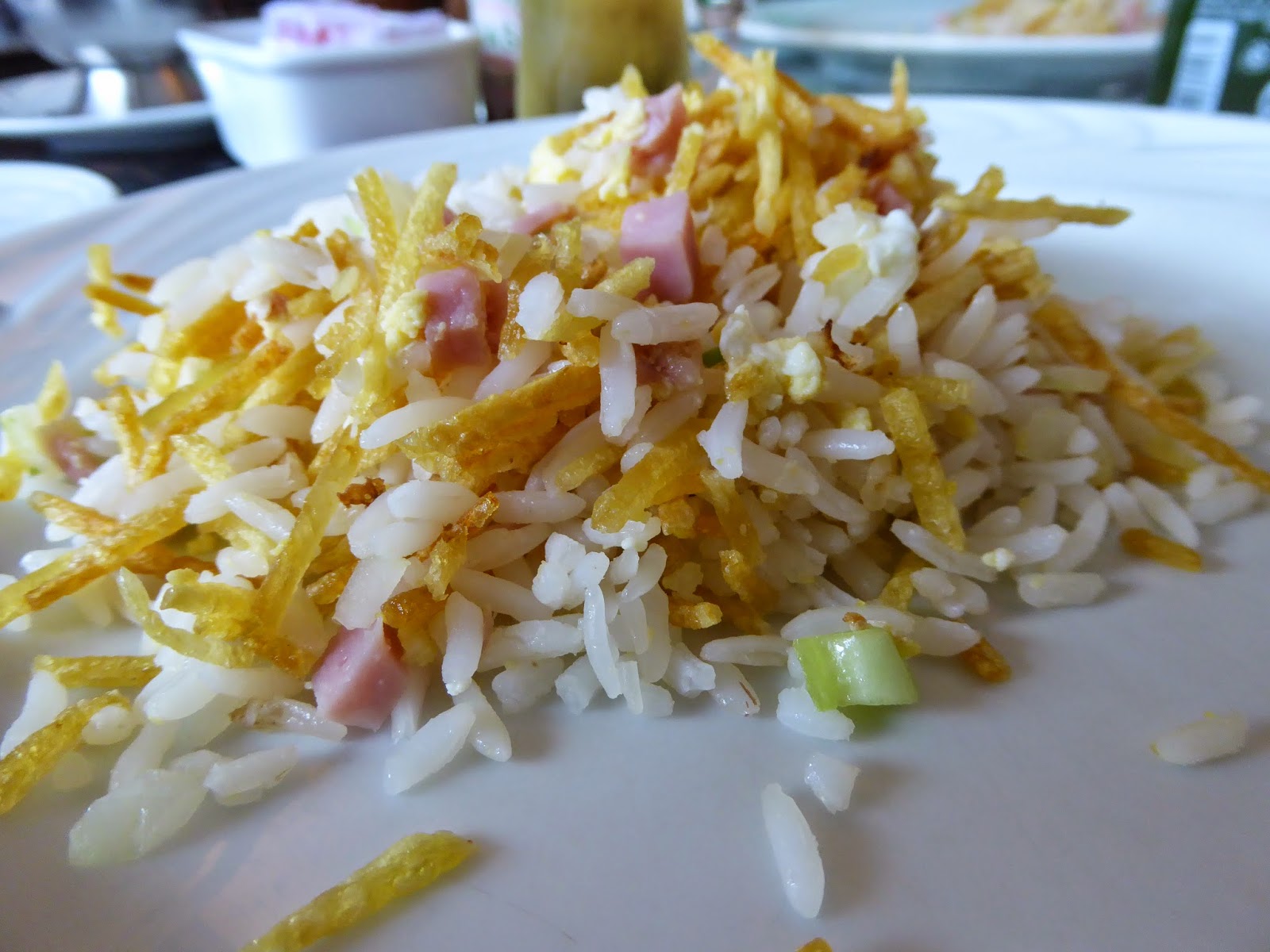 As you probably noticed, the beef comes with a lot of carbs. One portion of this dish is definitely enough to feed two, probably three if Dave isn't one of them! The chips vary in quality and the farofa, as mentioned, can be different. Often the mountain of rice is plain but sometimes, like here, it comes with veggies, ham and even little matchstick potato chips - even more carbs, yay!

This is possibly the most well known Brazilian dish. It is eaten a lot here, but only really at the weekends. It takes so long to cook that nobody has time to make it during the week! It is essentially a bean stew that gets its flavour from the smokey meats (sausage and beef) that are cooked with the beans. It is quite plain in flavour but good, hearty food. It is served with rice, shredded garlicky cabbage and slices of orange. Apparently the orange is to aid digestion. 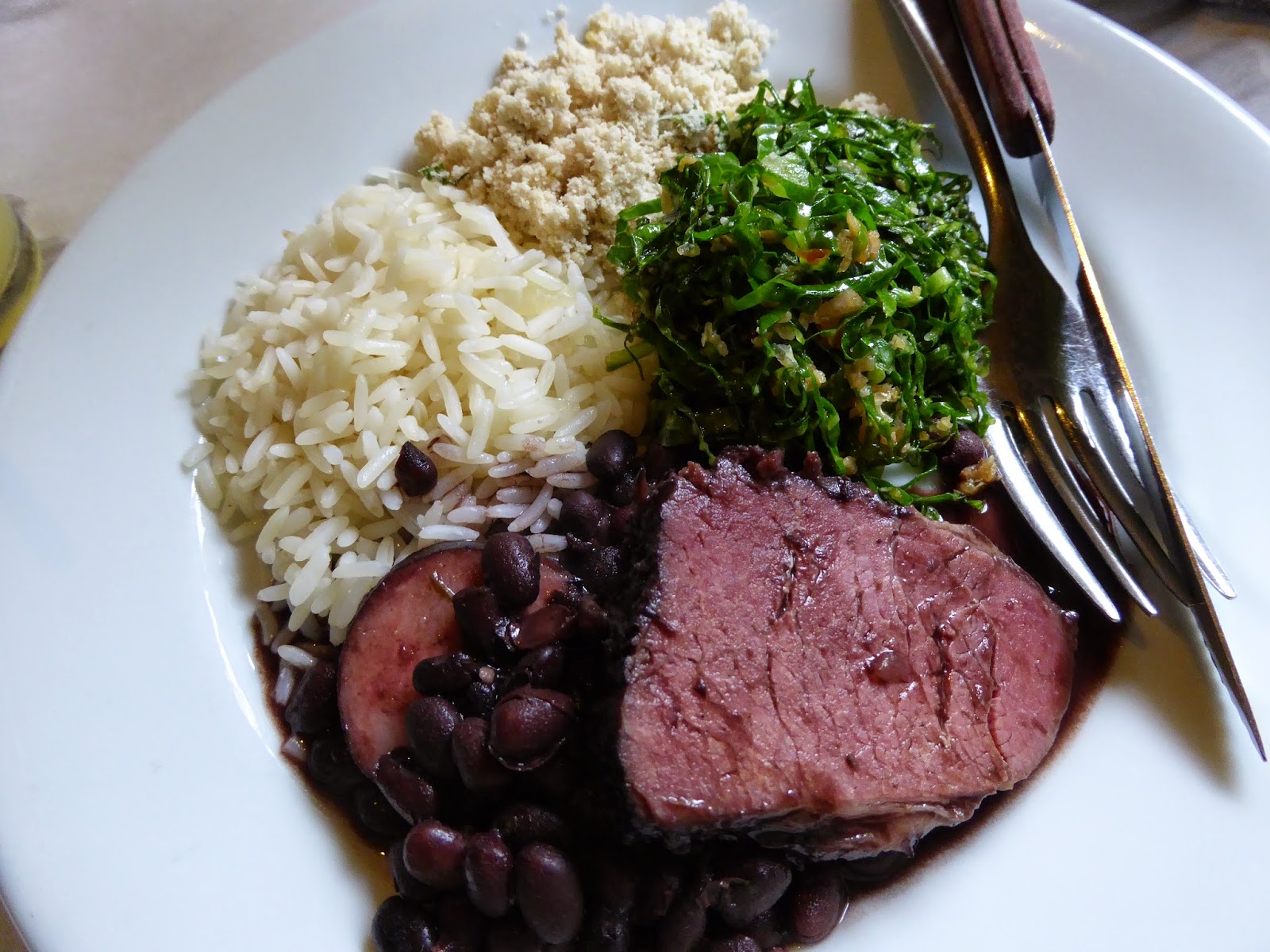 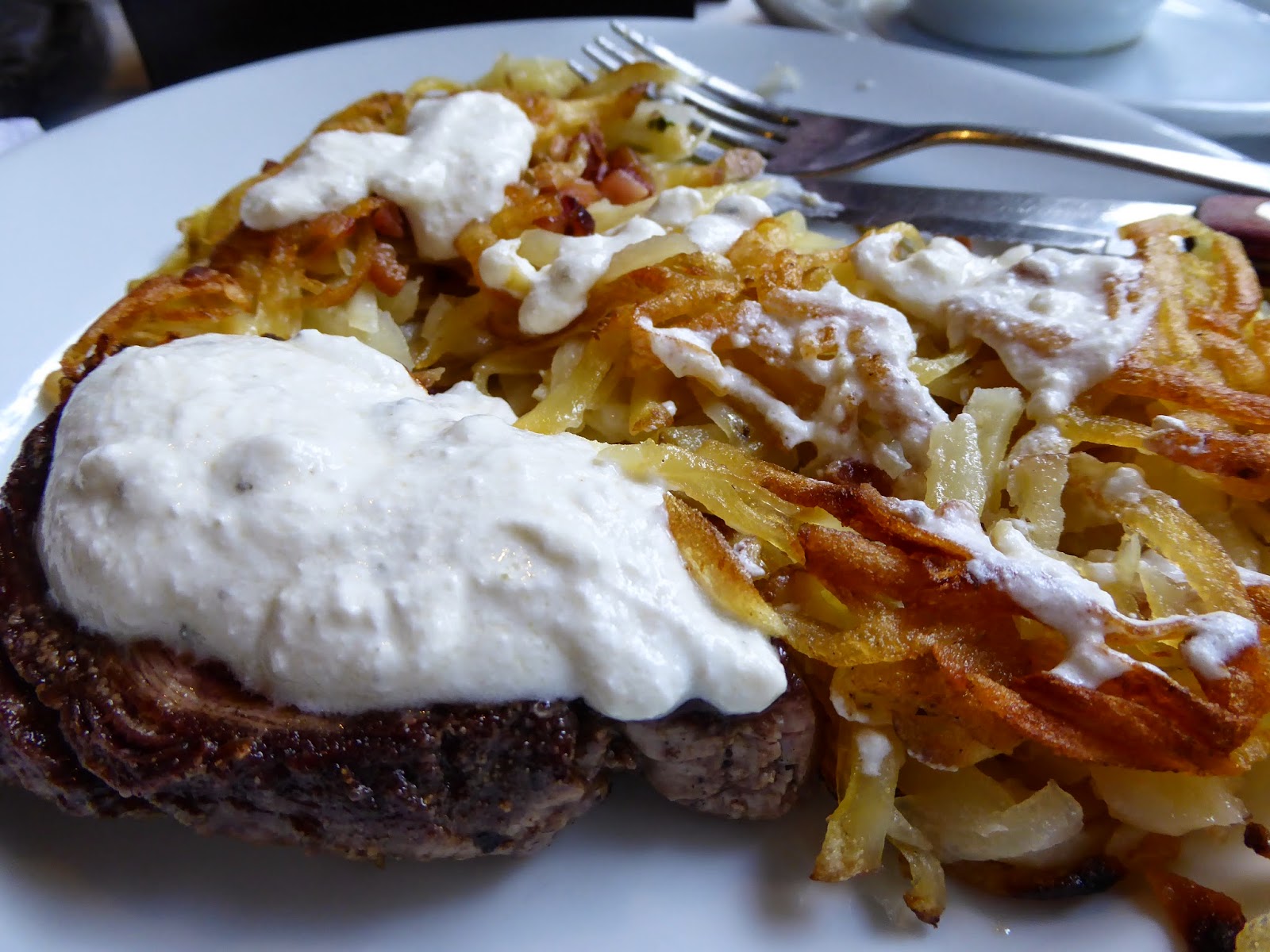 After the hike in Tijuca National Park we ate the feijoada pictured above and this dish - steak, potato rosti and roquefort sauce. I have seen potato rostis on several menus here and am intrigued to know how they came to be so popular. I will say that this one tasted a little too much like oil for my liking, and I'm not a blue cheese fan so it wasn't my ideal dish but the steak was, of course, delicious. If there is one thing Brazilians know, it's how to cook beef!


Kilo Restaurants
Pretty straightforward concept really - you walk around the buffet tables, gradually adding yummy things to your plate. Once you're happy, you take the plate to the person at the till, who weighs it and charges you accordingly. Different restaurants charge different amounts per kilo and obviously the quality and variety of food differs from place to place but the process is the same. There is one next to where I have my Portuguese classes and the food is really good. I have eaten there once and it cost me R$13 (£2.70) which was a bargain! The plate below was one of Dave's, from a more expensive place. As you can imagine, he sees "Kilo Restaurant" as a suggestion, rather than nick-name... 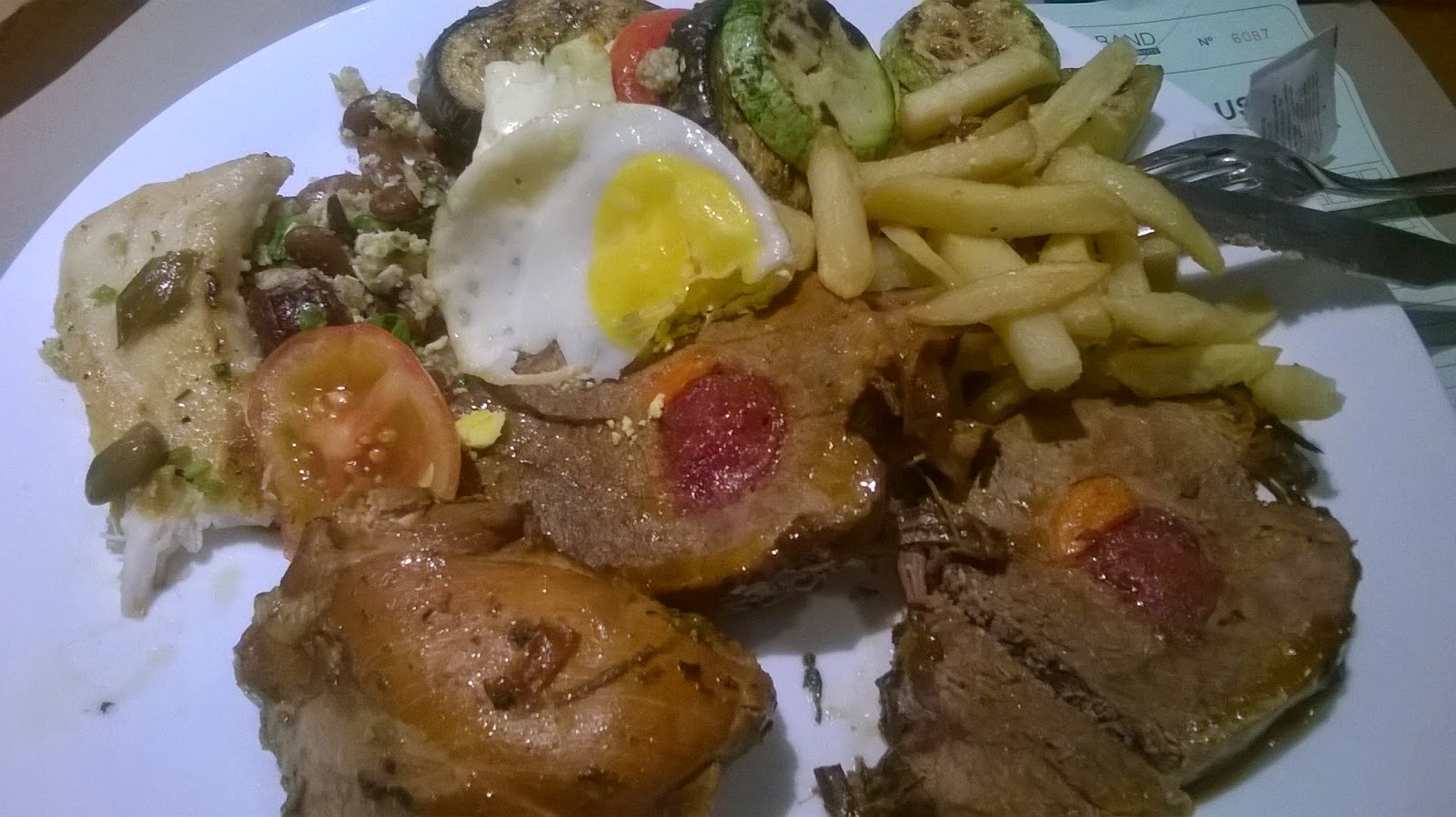 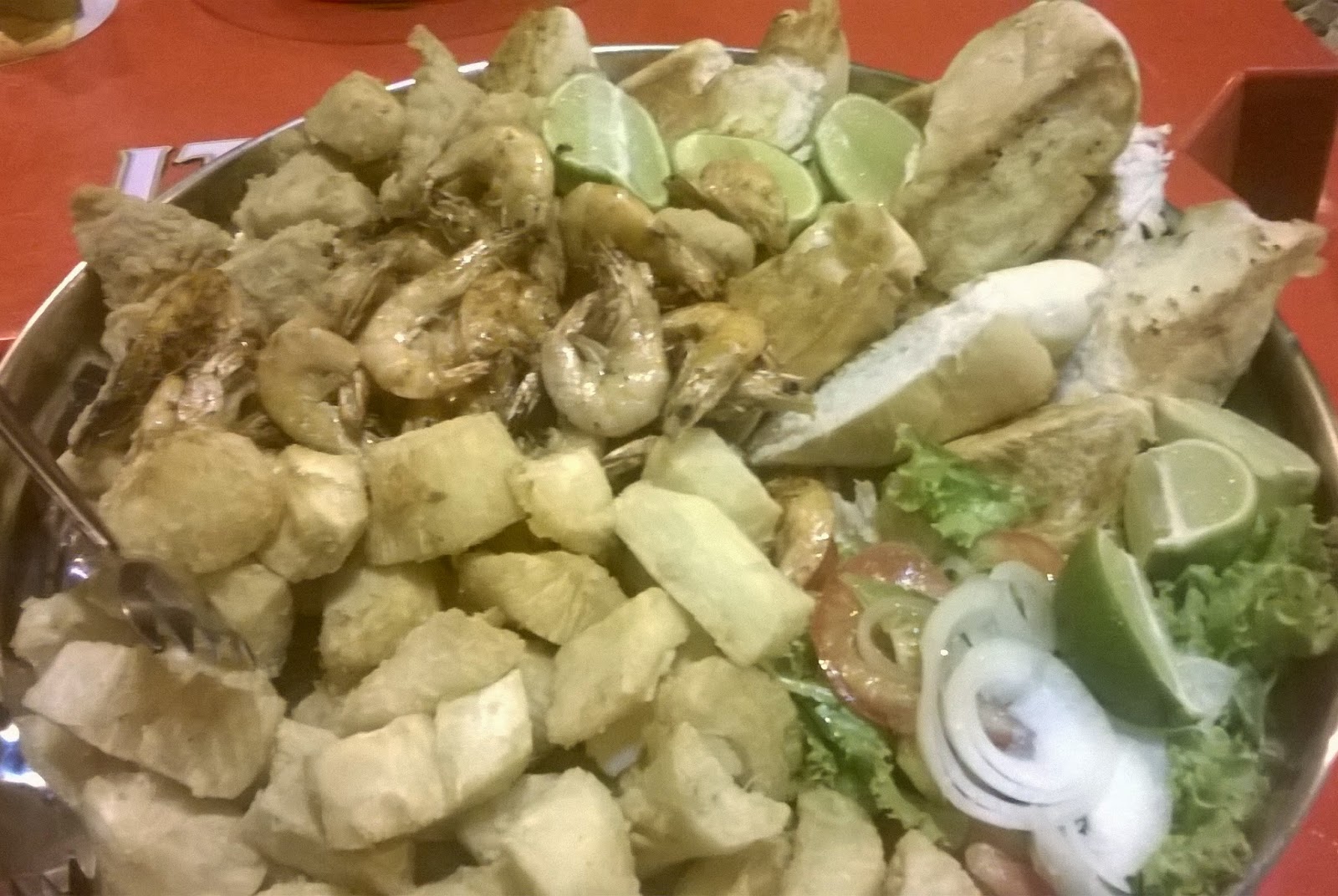 Quiosques (kiosks) are beach-side huts offering a variety of drinks and snacks with a great view of the sea and sand. Each quiosque is different and some definitely have better food than others. The one opposite our flat is great for agua de coco, whereas the one next to it served us this amazing platter of grilled prawns, battered fish, garlic bread and cassava chips. I love the abundance of cassava here - a sweeter, more fibrous alternative to potato that I must learn how to cook!

Northeastern Food
We visited a market (to be blogged about soon) that sells a lot of tat and food from the northeastern region of Brazil. We ate at a restaurant called "Estação Baião de Dois" and sampled some nordeste (northeastern) delicacies: 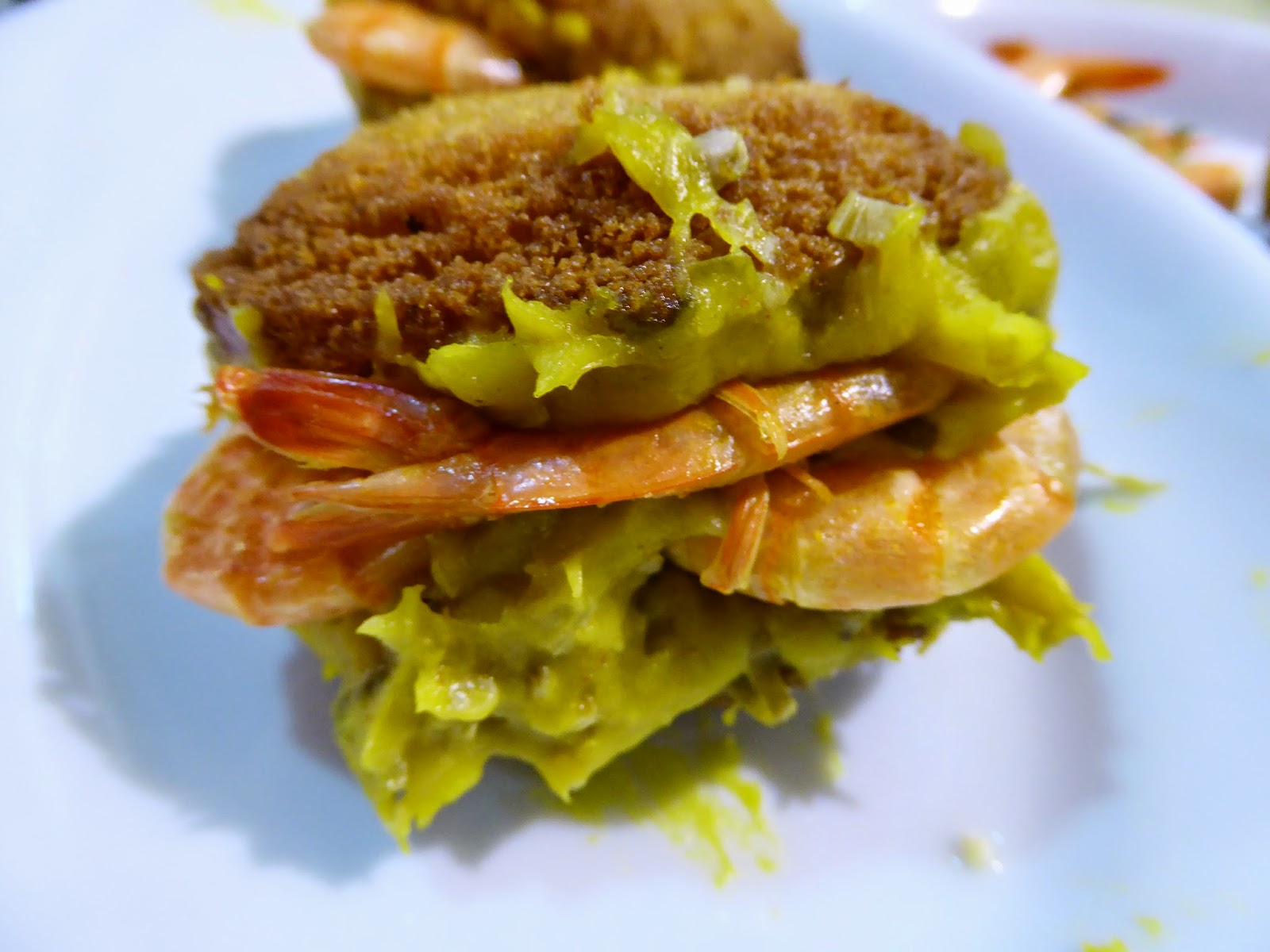 Acaraje is a popular street snack in the northeast, but is also very common in Nigeria and several other African countries. It is a bun made from a black-eyed pea dough, which is fried in palm oil and stuffed. This is the only acaraje we have tried so I don't know how authentic it was. The stuffing was a slightly bitter paste, probably made from some kind of green vegetable, with whole grilled prawns. It was tasty, although a bit too substantial for a starter. I'm keen to try these in their natural habitat. 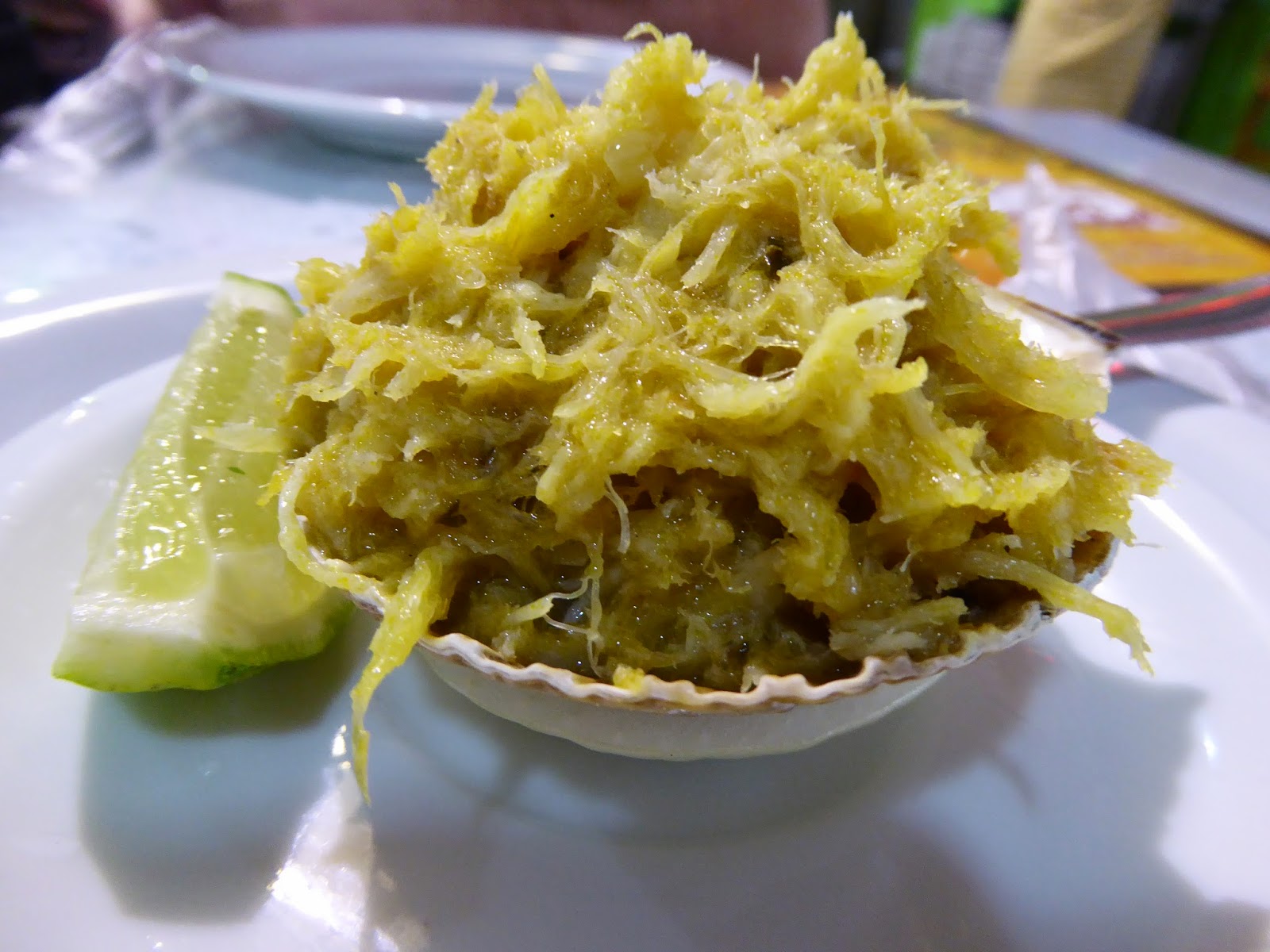 Casquinha de Siri is, I think, a general term for a stuffed crab shell. This one had a very mild flavour that was almost like curry, and was really tasty with a squeeze of lime and a few drops of chili oil. I'm not a big seafood fan but to me this was just on the right side of my fishiness limit, and it was shredded so the texture was a bit like fish. This is the first crab that we have seen on a menu here, much to Dave's disappointment. I wonder what other seafood they eat up north... 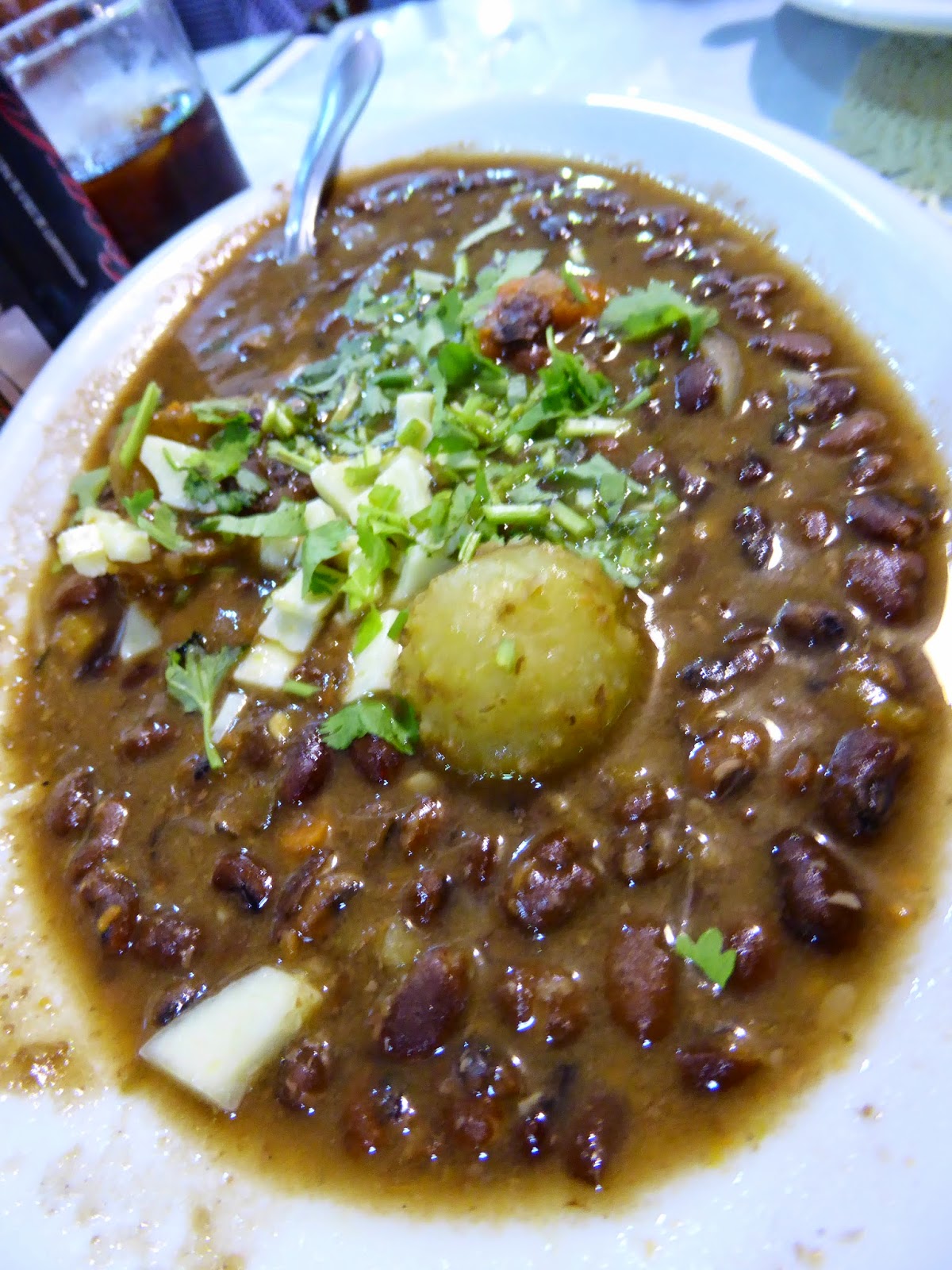 After those two starters, we order the obligatory beef. It came, of course, with mountains of rice, farofa (with onion) and cassava chips. An interesting condiment on the table was manteiga de garrafa - basically a bottle of liquid ghee to pour on our chips! I'm starting to see how the brown influences up north have had a delicious impact on the food. We also got a side of beans, or feijão, and these have cemented "the northeast" as an essential foodie holiday destination for us. The flavour of these feijão was richer and deeper than anything we have eaten thus far in Rio and that green stuff is CORIANDER! I loved it so much that we got the waiter to put the leftovers in a doggiebag for me. I froze it and have been rationing it out for my lunch ever since.

Next up is an assortment of random dishes that don't have so much story behind them but were still worth writing home about: 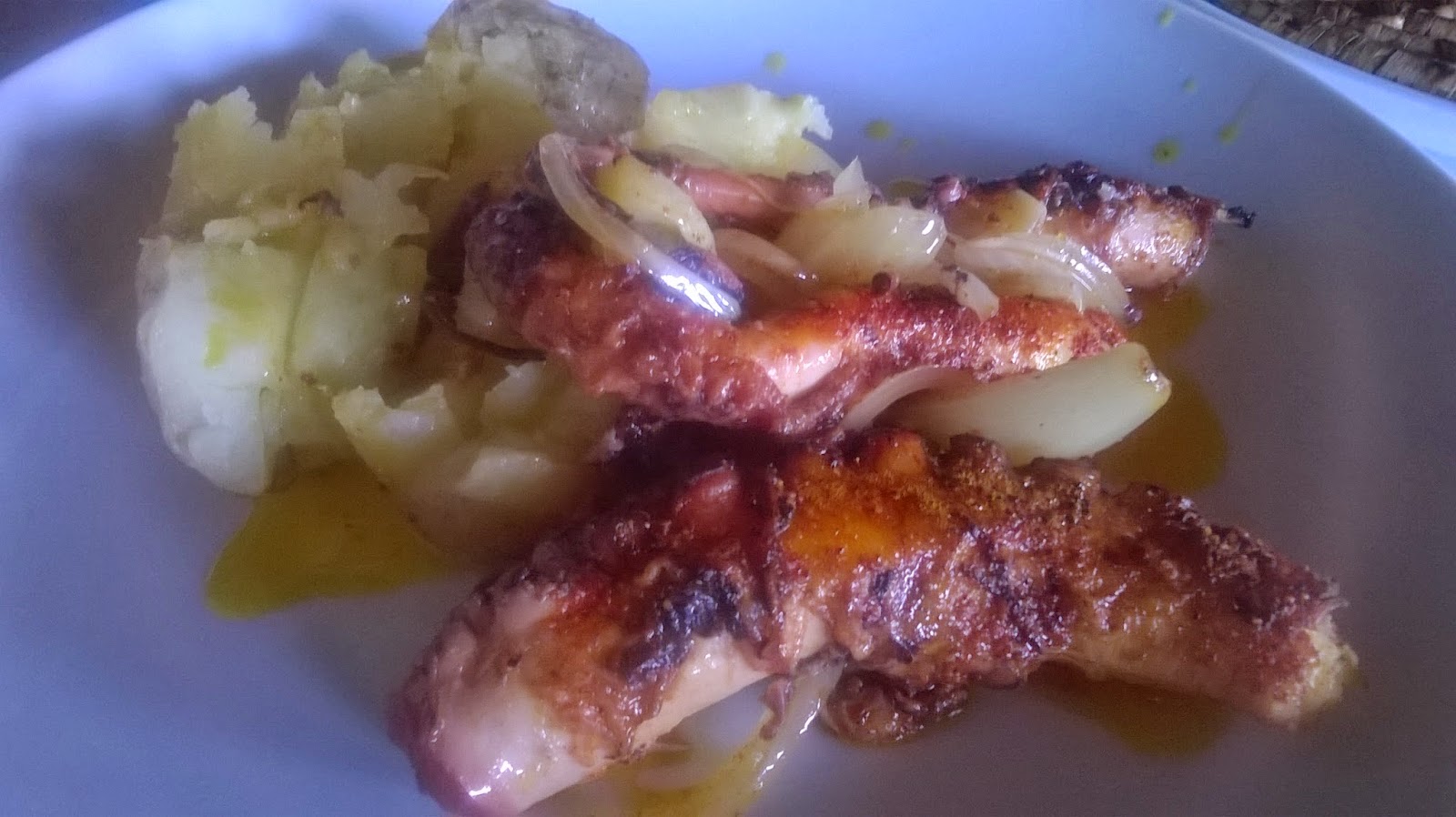 Grilled octopus. We have seen octopus on quite a few menus here but this is the only time Dave has ordered it so far. He says it was a bit chewy and not the best octopus he has had. The pool of orange stuff on the plate is palm oil, which is a very popular cooking oil in the north of Brazil, where African influences are much stronger in the culture and cuisine. 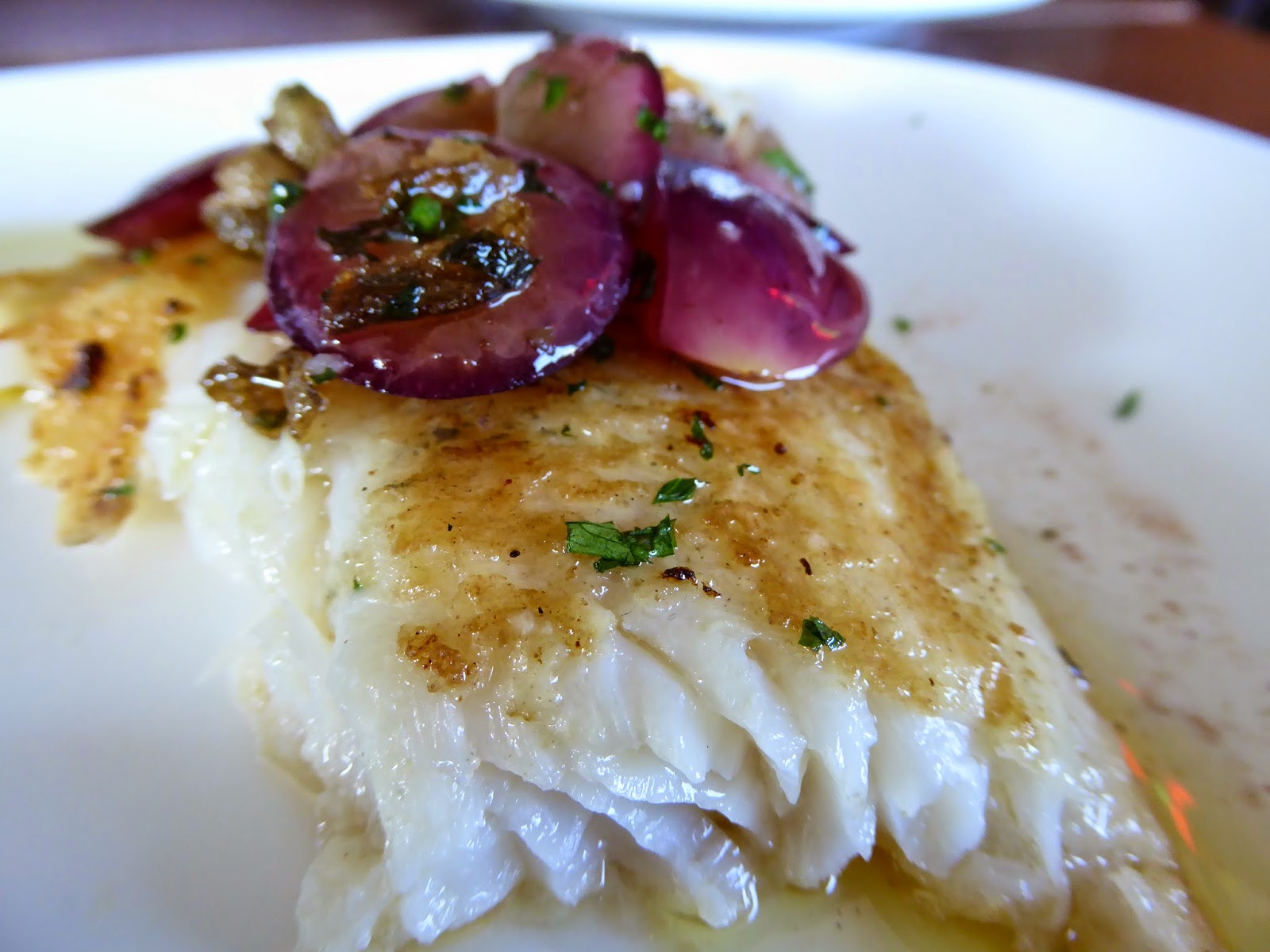 This is a pretty standard piece of grilled white fish, but with the interesting addition of grapes in the oily vinaigrette. We have seen this a few times and while it isn't bad, I'm not too sure what it brings to the table. Generally we have found meals in Rio to be lacking in vegetables and with sauces that are neither here nor there. 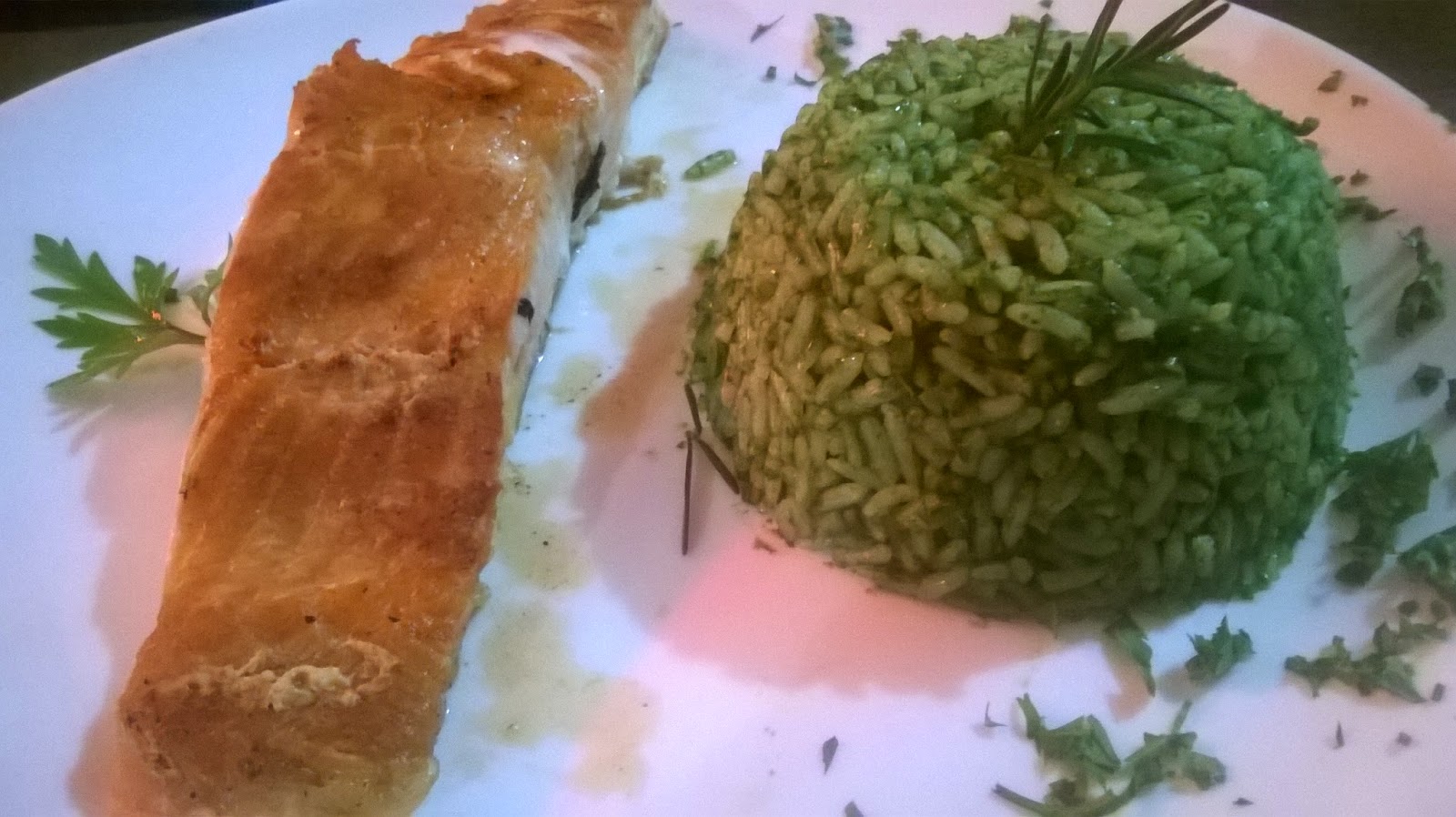 This salmon was extremely salty but with no sauce whatsoever. It did come with some interesting rice though - broccoli rice. I assume there was some broccoli blended up and mixed in with the rice but I couldn't really taste it. There was a slight hint of parsley, which was annoying but at least I could tell myself I'd eaten something green for dinner. 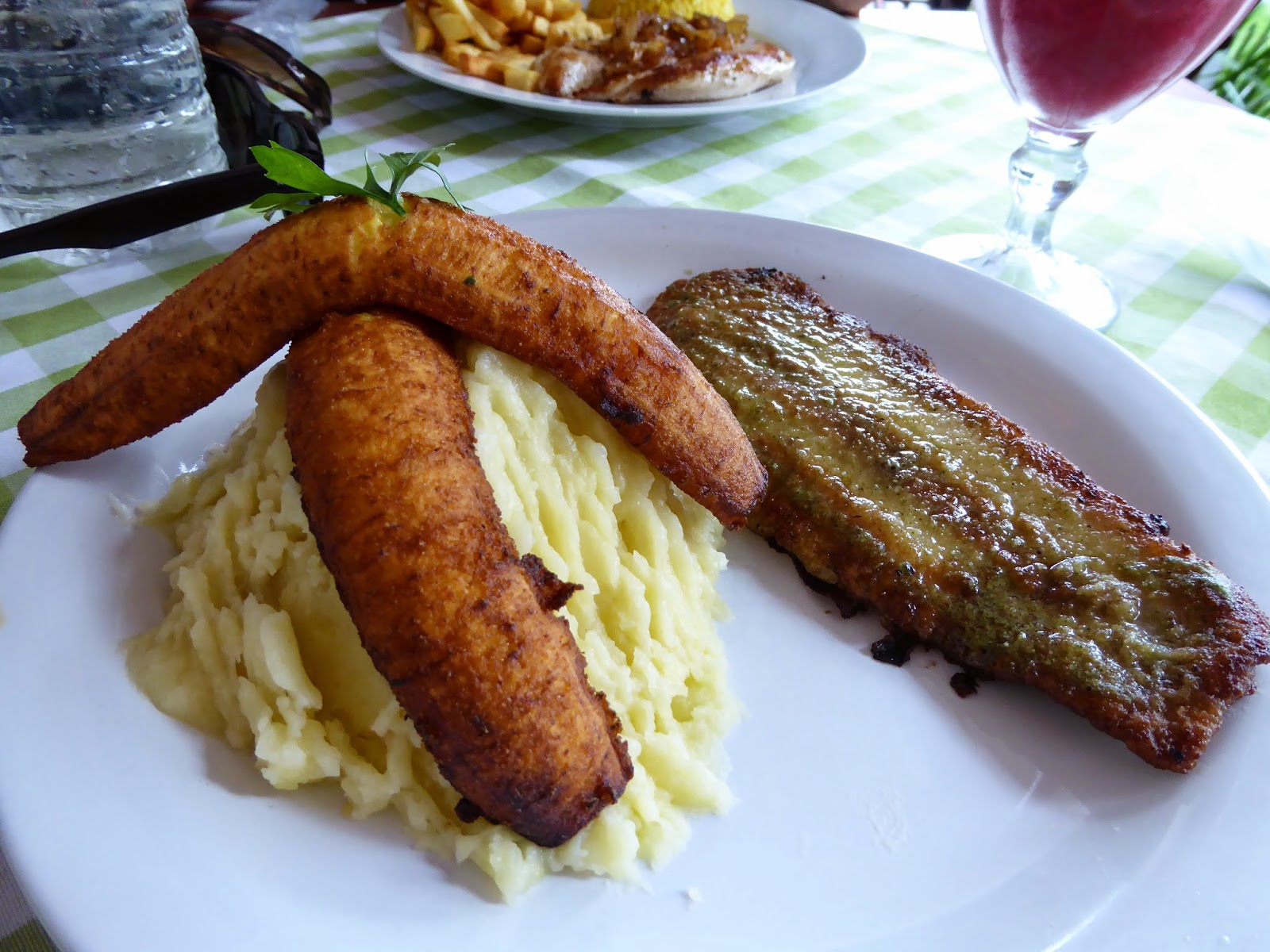 Another piece of fish with a vaguely pestoey sauce. This time the carbs came in the form of mash, which was very creamy and tasted like it was at least 50% butter. Atop the mash were two slices of fried banana. They had a nice, soft texture and hardly any flavour so we suspect they were actually plantain rather than banana. Does that count as a vegetable? I don't suppose it does if it has been fried! 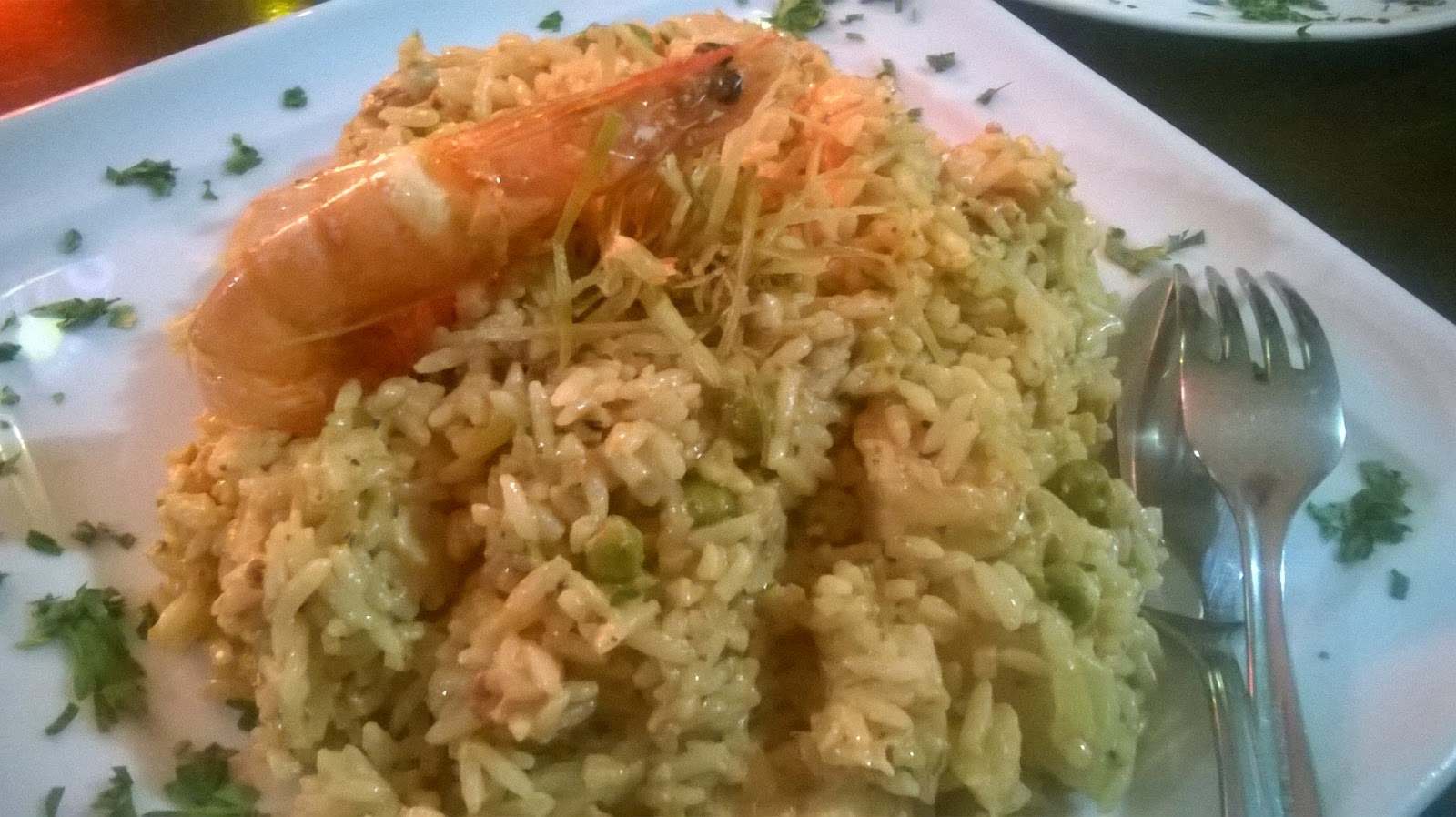 Seafood risotto with a huge prawn on top. There was fish, squid, some prawns and mussels in this, and I think maybe even a pea or two! Risotto seems to be very popular here, often cheesy and either as a main meal or a side dish. I don't know whether an Italian would be happy giving them the title of risotto, but they always look tasty to me! 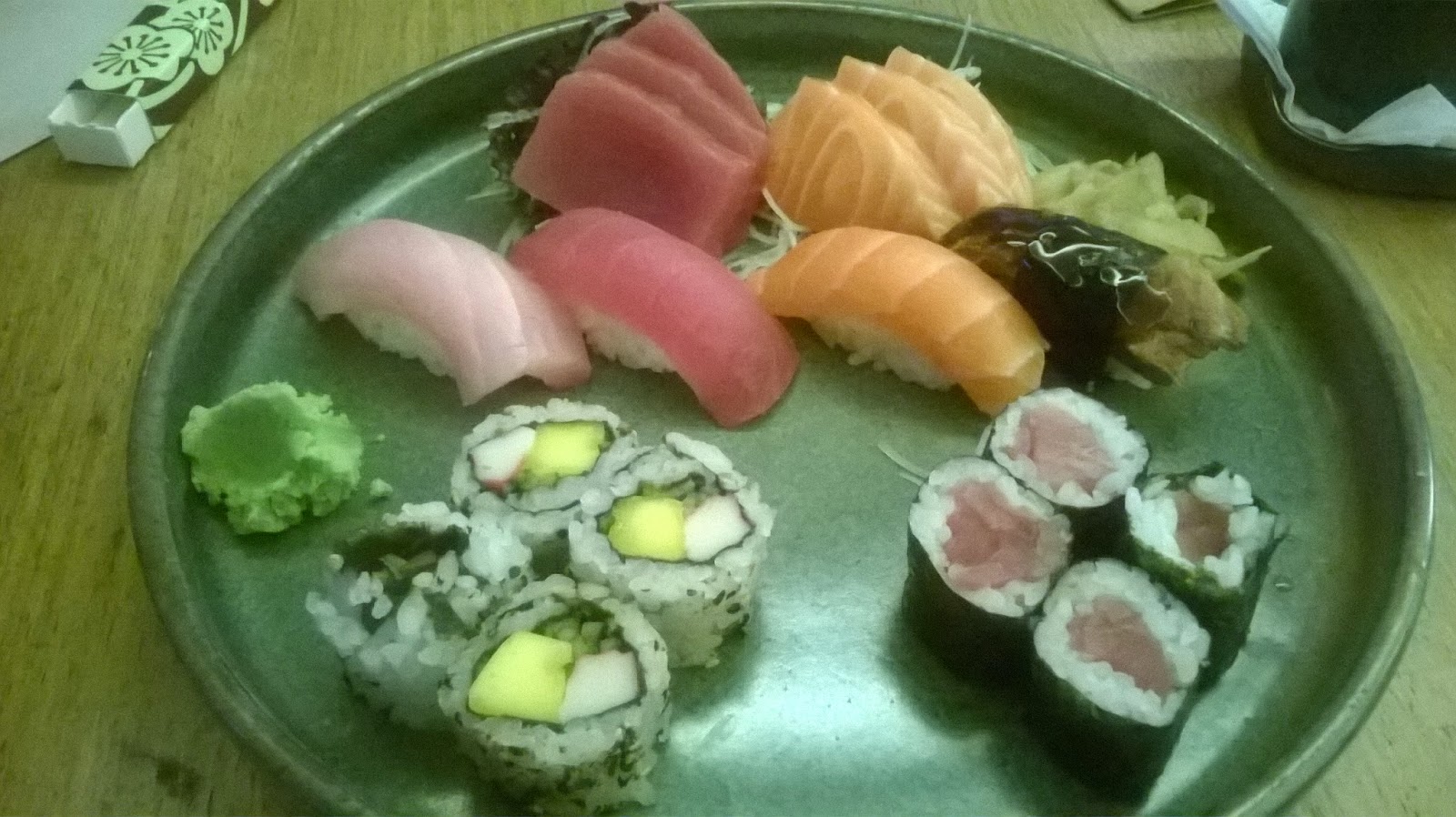 I haven't eaten any sushi here yet but Dave got this platter from a place down the road from our flat. It cost about £12, so pretty similar to the UK. It's a very popular food here in Rio, with restaurants and snack-shacks all over the place. It is probably because it is healthy and people are so body conscious here in Rio. 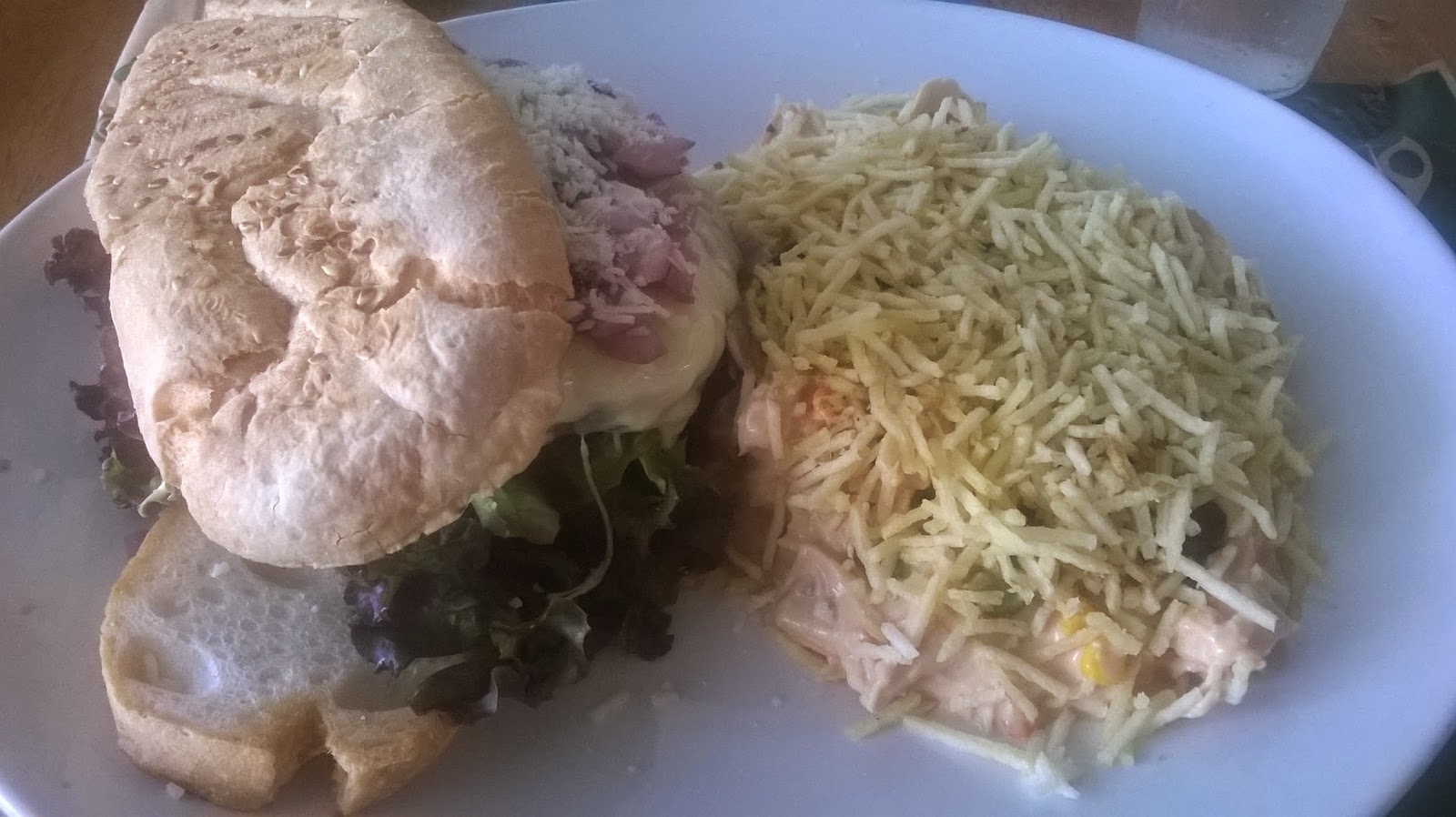 This one is a bit boring but represents something new in our lives. It's a burger from a "healthy" cafe and juice bar down the road. The reason I'm mentioning it is because Dave has decided to try going gluten-free this year and this place does gluten-free bread. Next to the burger you can see a "salad"; shredded chicken in mayo, a bit of corn and a few raisins mixed in, and a load of those matchstick potato chips on top. There are seriously so few vegetables with Brazilian meals! Luckily we are getting a lot of our 5-a-day in the form of various fresh fruit juices. I'll be blogging about these sometimes weird but (almost) always wonderful juices once we have worked our way through all of the options!


And finally, something sweet... 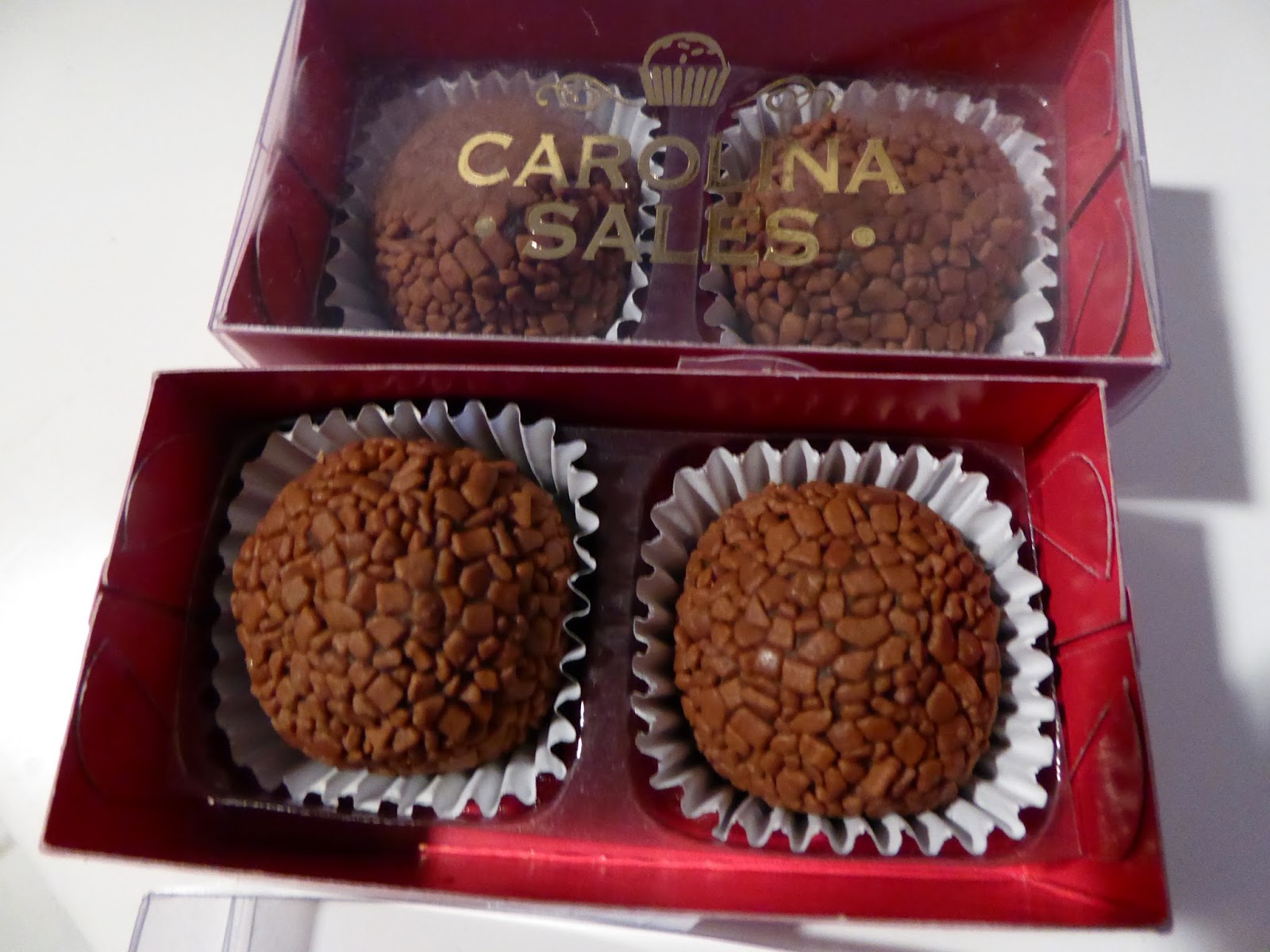 Brigadeiros are truffles made from condensed milk and coco, cooked down, rolled up and coated in sprinkles. They are extremely popular for all celebrations here and are sometimes served with a spoon in a little pot, rather than rolled into balls. These ones were very kindly gifted to us by one of the men who works on reception in our building. He wrote me a wonderful letter to go with them, explaining the origin of the name. I won't type it here, you can just wiki it! 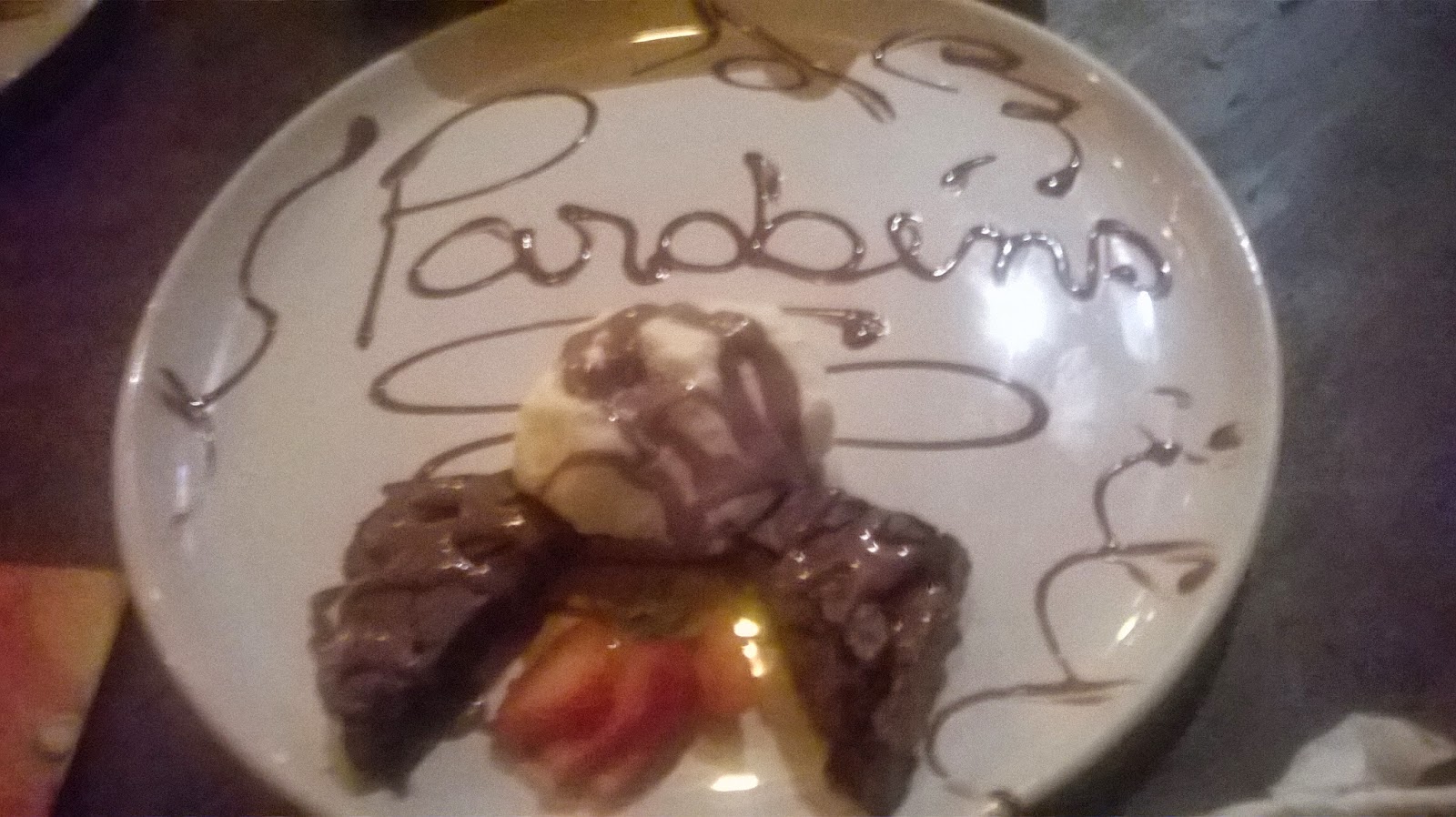 This dessert was from my new favourite restaurant, Guacamole! It's a Mexican restaurant that we went to for Dave's birthday and as part of the celebrations Dave got a free shot of tequila, we were serenaded by a mariachi band were given this wonderful chocolate brownie and ice cream wishing Dave "Parabens" (congratulations). Such fun! 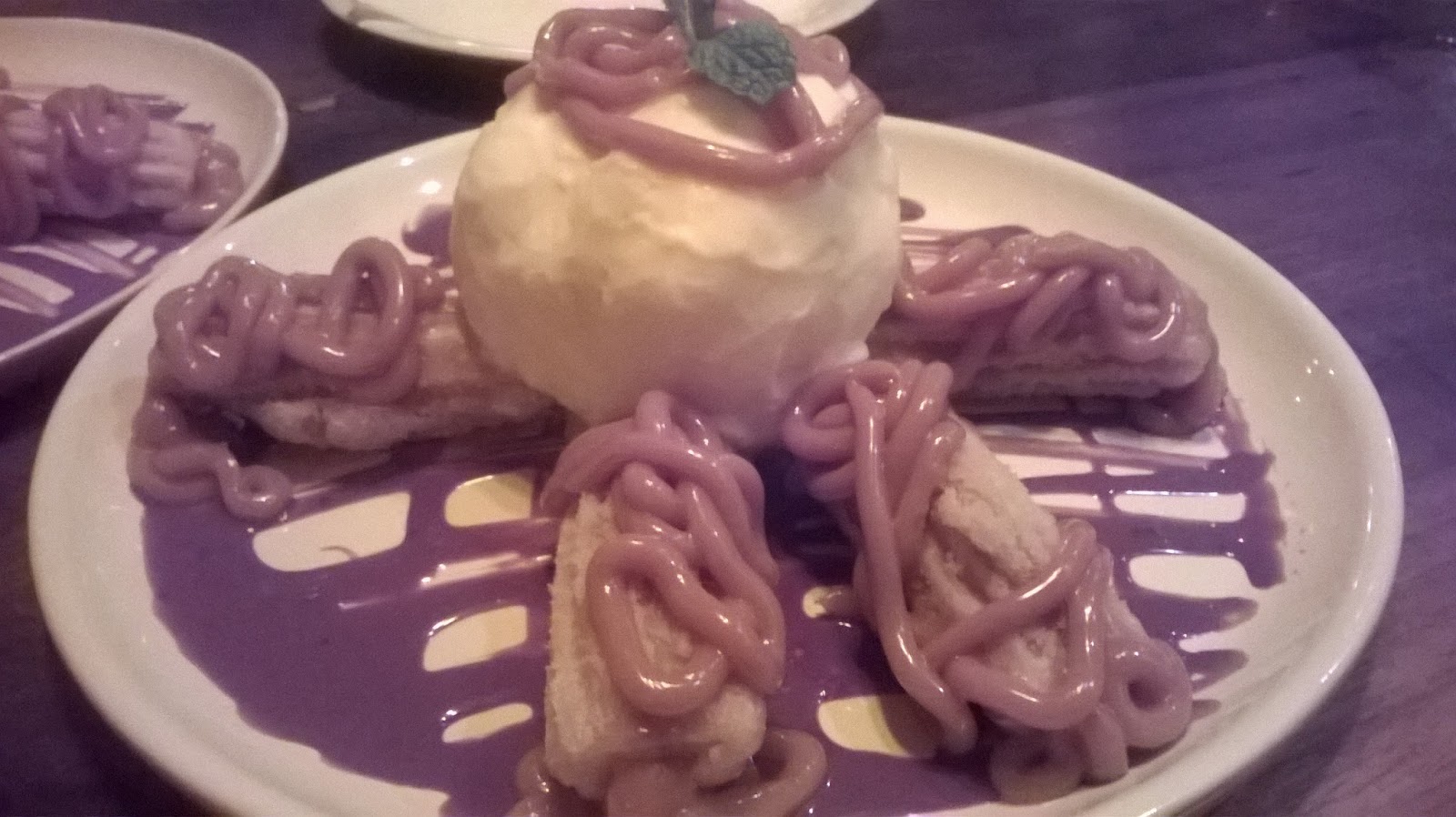 So much fun, in fact, that we went back again a few weeks ago! It wasn't anyone's birthday so we had to pay for this dessert ourselves but boy was it worth it - a huge ball of ice cream and five doce de leite stuffed churros. Drool! Doce de leite and churros are both really popular here and you can buy a more basic version on this dessert from street vendors. 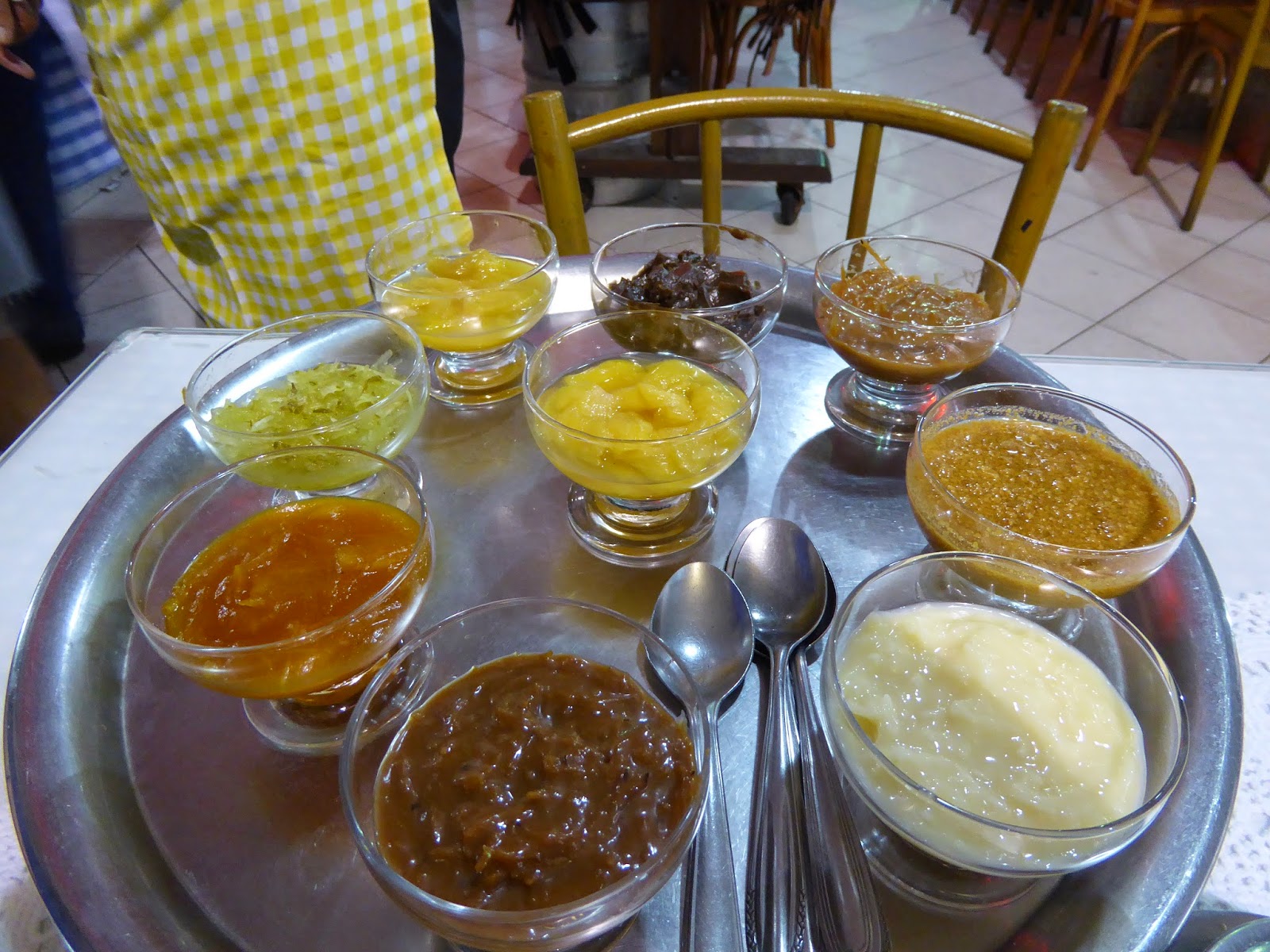 Last but not least, these were the desserts on offer at the northeastern restaurant. The yellow one in the middle is jack fruit, but most of them are shredded coconut with a variety of different flavourings: papaya, guava condensed milk...and doce de leite! Guess which one we picked? I think I might be a doce de leite addict before too long. It went so well with the coconut, which was fresher and tastier than the desiccated coconut we get back home.

So, that about sums it up for our first two months here. Not bad going really, considering we just eat chicken salad for dinner during the week. Still, we have a lot more work to do! This weekend we are going to Belo Horizonte, the capital of the state Minas Gerais. It's just the next state up from Rio de Janeiro, but is much bigger and people keep telling me how good the food is there so I am very excited.