This post is well overdue and as I'm writing this, it's hitting me just how quickly the last 8 and a half months have gone. So I'm going to cast my mind back to June and tell you about a lovely weekend David and I had in the countryside.

One weekend in the middle of June, we went to a city called Gyeongju, which is about an hour's bus ride from Busan. Although it is a city, it has a very villagey feeling once you leave the built-up shopping street and it was a lovely break from the hustle-and-bustle of Busan.
The day almost started with disaster. It took us longer than we expected to get to the bus terminal, David ran to buy our tickets (the last 2 available) and we made it on to the bus with literally 2 seconds to spare before it pulled away. David was very excited when we sat down and didn't stop talking about the perfect timing of it all until we got to Gyeongju! 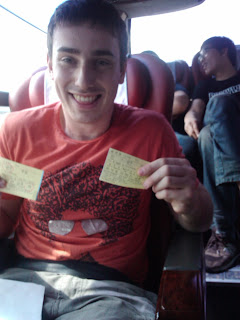 We arrived in Gyeongju and decided to walk to the guest house we'd be staying at. We didn't pass anything exciting along the way, just some strange English signage.
The guest house we stayed in was great. It's called Sa Rang Chae and I would definitely recommend it to anyone visiting, although make sure you call up and book in advance because it is very popular. It's a traditional Korean guest house and we had a double en suite room. They provide eggs, bread and coffee for breakfast and the owners are really friendly - they even gave us beer and soju in the evening! You've got to love Korean generosity. Here are a few pictures of the court yard and our room.
We dumped our stuff in our room and then headed out to explore. We decided to rent bikes for the day, since the sites are quite spread out and it was a lovely day for a cycle. I'm not the most confident cyclist but one grazed knee and a few wobbly minutes later I was doing fine.
We saw quite a lot over the next 2 days and I will attempt to keep my descriptions brief and informative...but anyone who knows me will know how unlikely I am to succeed at that!

First, we went to the Royal Tomb Complex. This is a park full of burial mounds, one of which you can go inside to see an excavated coffin. We had a nice stroll around and saw some huge ants! When we first arrived in Korea I wrote about the lack of wildlife but over the summer I realised that it simply isn't true. Stay tuned for details.
We left the mounds and cycled along a path to the Cheomseongdae observatory - one of the oldest surviving astronomical observatories in East Asia, according to wiki. You had to pay to get up close and personal with it so we didn't bother since it wasn't up to much really.
We then cycled to the Anapji royal pond garden (via a really old ice storage chamber) and it was beautiful. There was a model of the old temple that used to be there, and there were loads of lovely carp in the pond. We got some great photos.
We then cycled to two much less interesting places - the ruined site of an old temple, which was basically just a field with some stones in, and an actual temple with a pagoda in that was apparently really old, but turned out to have been rebuilt in the 1960s. This was a frequent issue we came across in Gyeongju. Many of the tourist attractions claimed to be very old but upon closer inspection, we always found a sign stating that it was burnt down by the Japanese and rebuilt some time in the last 60 years.
We cycled back to the guest house via the Gyeongju National Museum, which was one of the only places we visited that we didn't have to pay to see. We had a wander round for a bit but by this point we were pretty achy and hungry.
We went back to the guest house and got a recommendation for where to eat. Gyeongju is famous for one particular dish called Ssambap, which is a rice dish served with various side dishes. The rice element wasn't anything special - just plain boiled rice - but the sides were immense. We had roughly 25 different dishes on the table between the two of us! A lot of veggies and fish, and one pork thing, with loads of leaves. The great thing about side dishes is that you can get refills at no extra cost but, as you can see by the before and after pictures below, we didn't even make it through the first round!
After we had attempted to devour our dinner, we got a taxi to the Bomun lake resort. This took longer than we thought so when we arrived, the cultural performance we were going to see was finishing. We caught the last 2 minutes of the final performance and then had a wander around the lake, before heading back to town. The taxi ride back was surprisingly eventful. First, the driver pulled over into a side road and another taxi driver leaned in through the passenger side door, rooted around Dave's crotch for a sat-nav, and then drove off. It was all very strange. Then as we pulled away, the driver ran over a frog in the road and thought it was hilarious. She was acting it out with her hands and strange froggy sound effects for the next ten minutes.

We got back to the guest house and there was a group of Koreans about our age sitting in the court yard drinking. We decided to join them and the owner was pouring beer and soju for us before we knew what was going on! He gave me the most brilliant cup to drink out of...
After a while the mosquitoes got the better of us and we decided to call it a night. We settled into our room and got some much needed rest because we had another busy day planned for the Sunday.

So the next day we woke up nice and early, ate our complimentary eggs on toast, and headed out to see the final two sites. First we got the bus to Bulguksa Temple. It was about 20 minutes from where we were staying and easy enough to get to. It was a huge temple complex with loads of beautiful ponds and trees. We had such great weather for the weekend too, it was lovely. 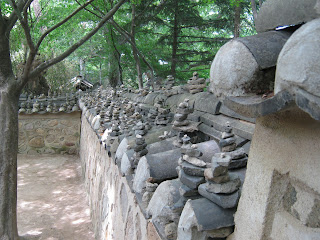 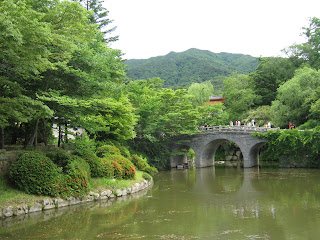 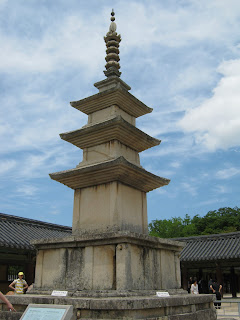 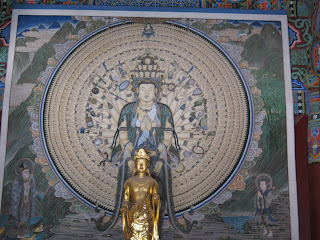 We then got the bus to the Seokguram Grotto, which is part of the same temple complex. It is about 4 kilometres away from the actual temple though, so although there is a path you can walk, I imagine it's quite a trek. The bus we took wound up the side Mt. Tohamsan, and when we got off we were greeted by a great view. 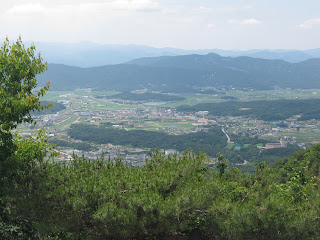 It was then a pleasant, twenty minute walk up some stairs and through some trees, to get to the Grotto.
I have to admit that upon arriving at the Grotto, I was very disappointed by the lack of Santa. That bearded, white-haired, jolly man is all I knew to associate with the word, but what I found was actually a small room with a big, stone Buddha inside. We weren't supposed to take pictures so Dave just took one sneaky one. Apparently the grotto was completed in 774, and from what we read it hadn't been burnt down and rebuilt, so it was genuinely very impressive.
After the Grotto we got the bus back down to the town, hoping to make another mad dash for the bus. I messed things up a bit because I really needed a wee so while Dave was buying the tickets I pegged it to the loo. Unfortunately there was a queue and then I was in such a rush to do my business that I accidentally tinkled on my foot a bit (damn squat-john!). And to make matters worse, my bursting bladder meant we missed the bus. Luckily there was another one 15 minutes later. Phew!

It was a lovely, romantic weekend and I really recommend it to anyone who fancies a break from city life. Total relaxation. Thanks for a great weekend Dave!


How to get there: To get to Gyeongju, just head to Nopo Bus Terminal (attached to Nopo subway station, Line 1) and buy yourself a ticket. It's 4,500 won each way and the buses run every hour to get there, but for some reason they run more frequently to get back to Busan. See our bus timetable posts for more information.