When Katie told me she worked at a boys' school, I took her at her word. However during my first visit, for their school festival, there was a Miss Samrak competition (Samrak being the name of the school). Rivalling any beauty pageant in terms of quantity and quality - we were amused, shocked and aroused in equal measure. 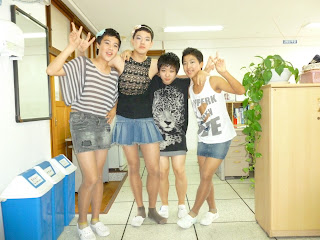 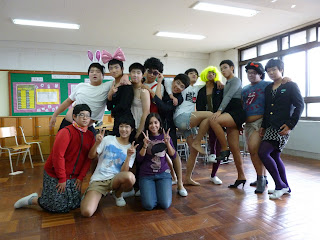 The highlight of the show was Harry – one of Katie’s favourite students, who came as an Ajumma (old lady). Under the sunglasses was a black eye, given to her by her ex-husband or so we were told. 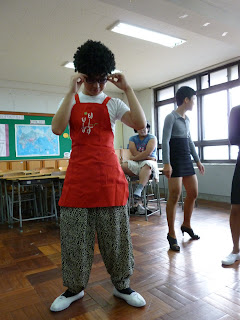 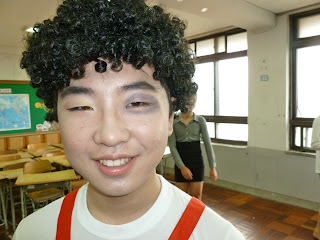 I have made a quick video to show the highlights of the Miss Samrak competition – soon to be the most prestige modelling show in the world.
Moving on from cross-dressing 15 year olds to powerful athletes. We went to Daegu, in between our China and Tokyo trips, to watch the World Athletic Championships. What a fantastic day! I have never had so much fun watching the women’s high jump. There is something about sweaty women flying over long rods that excites me. 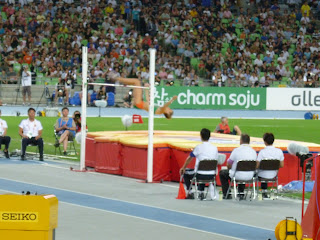 I’ve always enjoyed watching athletics on the telly but it was even more exciting to watch it live. I got to see a bit more behind the scenes action, which was intriguing.
I felt part of the moment actually being there and seeing the fastest EVER man running past me was something to remember. 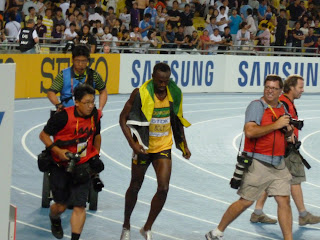 We watched javelin, high jump, hurdles and sprinting, not to mention a couple of wheelchair races. All of them were highly entertaining! 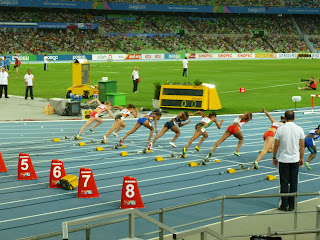 Standing with such physical specimens really made me feel unhappy with my own inadequacies though. I considered running onto the 200m tracks to see if I could take the gold from Bolt but I decided that he should have his moment and I’ll save my legs 'til the Olympics. 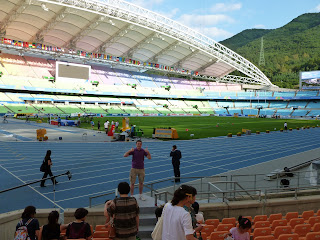 The stadium was fantastic and in typical Korea fashion – very surprising. For instance, you were allowed to take in outside food and drink (including alcohol). No hot food was served in the stadium but they did sell beer, crisps and various snacks. The price of this food and drink was the same as it is in a convenience store. I wonder whether Koreans are aware that they can charge stupid amounts at these kind of events or if they just think that no-one will buy it. It also makes me scorn England and the rip-off prices that they charge at every given opportunity – how much will a beer be in the Olympics? £3-5, I imagine.
Anyway, it was a great day and if anything it made me sad that I don’t have any tickets to the Olympics. However paying 20 pounds to see the 200m final from trackside rather than the 60 pound to be up in the Gods that it would cost me in London fills me with all kinds of happy that only a tight git like me can get. 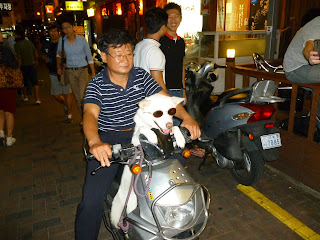 We also saw the coolest dog in Daegu!