The End of Dynamic Spanish?

You may have noticed that the blog has been quiet for a while. It's not because we haven't been living and exploring, but because our energies have been focussed on the Kickstarter campaign that most of you know about.

Unfortunately the Kickstarter was unsuccessful and Dynamic Spanish will not go ahead…for now.

I never like to write things off for good and we still believe in the product. The future of education will involve in virtual reality and we will continue to make progress to that end.

My current feeling is that the 2018 VR market is not there yet for users looking for educational programs. This isn't to say that we had no interest. If you ignore friends and family who were lovely and supported us because they like the product and believe in us, but aren't representative of a market for a VR Spanish course, you're left with around 20-25 backers.

Although this is a small number, it shows that there is some market looking for innovative education projects. We didn't advertise heavily and the project spread mostly organically. We did have some press coverage on VR news sites that led to pledges. When you consider this, it's possible that the market could be a hundred or thousand times bigger, if every VR user had seen our product. Right now, the market for a VR Spanish course is very small and that is primarily because VR is being used for gaming. In my mind the venn diagram looks like this: 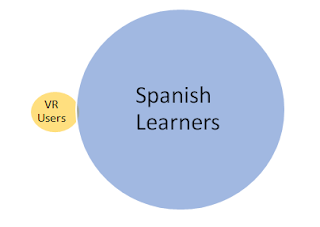 The gamers are more interested in action-packed, novel games, and early tech adopters in pushing the boundaries of the technology. As it becomes more popular, the number of use cases will increase exponentially. One question jumps out: when is this going to happen?

The answer: Nobody knows.
My guess: In the next 18 months. I think Christmas 2019 is going to be a big deal for VR with the newly announced Oculus Quest headset leading the sales.

Standalone VR is the solution to mainstream adoption, with ease of use at the forefront. This will propel the technology forward. The Oculus Go has been very successful (estimated over 1 million units sold at time of writing) and that's just within a 4 month window.

In 18 months, the venn diagram might look something like the one below. A larger VR market with a wider interest base, particularly around more educational and less active experiences. 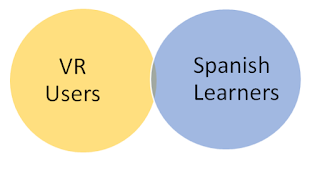 In 2023, I predict VR will be as common as a large TV in people's homes, and it will look something like this: 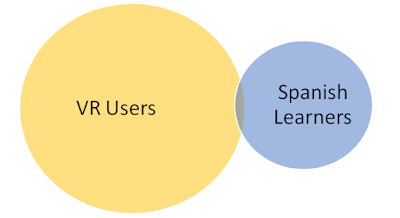 Was the failure of the Dynamic Spanish Kickstarter purely down to market size?

The answer to this is not entirely…
We are unable to change the market size but we can learn from the mistakes we made. Our top three mistakes were:

1. Not building an email list of interested parties using our free VR Spanish course
Fundamentally we are not Duolingo or Michel Thomas and getting hard earned cash off people who don’t know us is always going to be difficult.
We needed to build a community of like-minded thinkers and learners before the campaign launched. We could have done this by providing them with free content to prove our worth in this space and also getting a better understanding of our customers' pain points with the product.

2. Focus on the wrong market
We started the campaign aiming at current Spanish learners who could use the VR course to supplement and improve their learning. Our Kickstarter video was based on this assumption. This was a big mistake. We needed to target current VR users who want to learn a language with the new technology. This would have meant more focus and time on the places VR users hang out both online and in virtual worlds.

That's where our new VeeR experience comes in. Now someone can be watching our videos in thirty seconds, not five minutes. It's simple and easy to use and many more people will watch this than through the original method.
The downsides are that VeeR experiences only support 1080p rather than 4K, and that we are not able to contact our users directly unless they sign up for the additional materials. I have contacted VeeR and have been informed that 4K support may be coming in the next month, so fingers crossed!

We will continue to offer our free starter pack and begin to build up a list of interested parties in the technology. However, the progression of the full course will be put on hold.

We are going to pivot our focus to creating free 360 VR experiences on a wider variety of topics, including culture, travel, and inspiring scenes. This involves a significant investment in a new camera and editing suite. We believe that improving the technical quality of our content will drive more consumers to watch our stuff, as well as future-proofing the footage and investment of time and money we plan to put into filming in the next 18 months. There is still a big question mark over the delivery of this content to consumers, as options are currently limited.

If you do like what we're doing in the VR space, follow us on VeeR and/or the rest of the usual platforms listed here:
vimeo.com/morningcalm
youtube.com/channel/UC-F6WeEnsVAFZZ5iFsfN_6Q
veer.tv/vr/Morningcalm/home
facebook.com/morningcalmproductions
samsungvr.com/channel/6b083da6a90675e3db2a1721

Building up followers and subscribers that watch but don’t pay for our content may seem like an unsustainable enterprise, but you only have to look at the YouTube influencer market to realise the potential.

We've also opened a Patreon page for like-minded thinkers and people that love our content to come and support us. By supporting us, you get exclusive access to content and can help us decide what we should focus on.

Patreon is a way to join your favourite creator's community and pay them for making the stuff you love. For example, if you sign up for $5 per month you’ll get access to all of the content that creator makes for the public, plus added perks like behind the scenes videos, early access to content, bonus material etc. Supporting someone on Patreon means the creator gets paid regularly, and you become a bonafide, real-life patron of the arts. Imagine your favourite creators making a living doing what they do best…because of you!

Click here to check out our rewards and please support us at a value that you're comfortable with.

Much love,
Dave and Katie.

P.S. Normal blog posting about our travels and experiences will continue, along with our commitment to produce a new 360 VR experience every single Friday.