Romania In My Mouth

The food in Romania was, generally speaking, pretty good. It did lack vegetables so we sought out salads whenever we could, especially in the heat. But the meat was of a high standard and everything was seasoned well and presented in a pleasing way.

This epic feast was from a quaint but touristy tavern in Cluj. The huge platter contained every kind of grilled meat you can imagine, piled high with roast potatoes, cheesy, bacony polenta and garlicy sour cream. Be still my pounding, overworked heart! 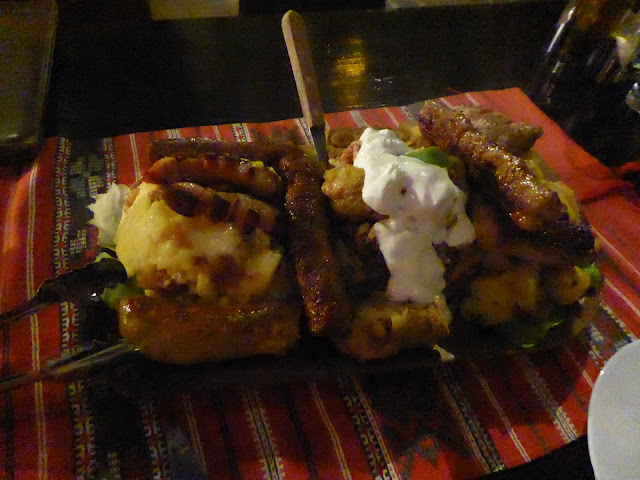 The meal below was from a slightly odd self-service restaurant in a basement near the botanical garden in Cluj. The food was basic but fine, with the highlight being the rice salad, which actually turned out to be orzo. I've hardly ever eaten orzo and I must say I do quite like it. I definitely prefer rice, but it was a pleasant surprise. 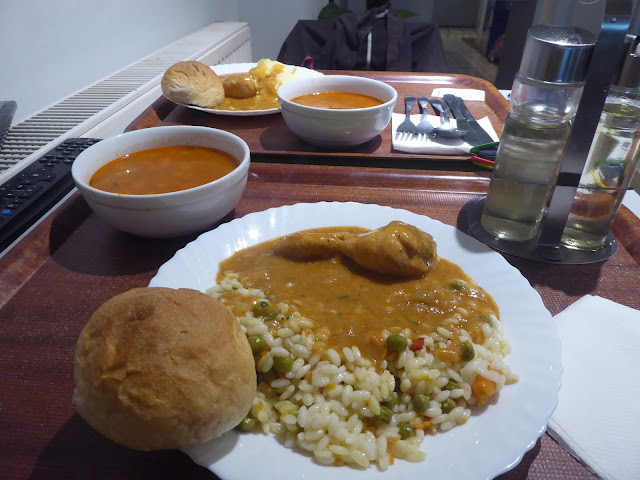 Dave was absolutely delighted by the pizza he had in Pitesti - smoked salmon, cream cheese and spinach! Washed down with a few cold pints, this was exactly what we needed after a long day of driving up and down the Transfagaras. 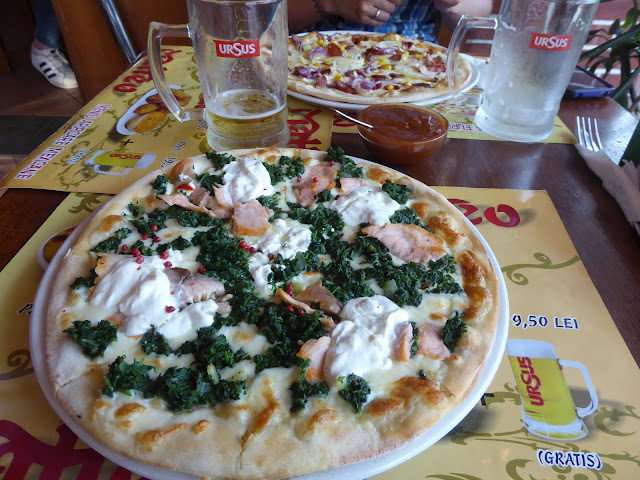 My favourite meal in Brasov was the one we ate on the balcony of our hotel, comprised of bits and bobs we bought at the supermarket, accompanied by some wine and a lovely sunset view. But the restaurants in the city had a lot to offer too.

The following were from a very busy restaurant in the city centre called La Ceaun. We started with a really tasty aubergine spread, which had a very fresh flavour. I then had some slow cooked ribs with delicious roast potatoes and a spicy sour cream dipping sauce, and Dave had braised pork knuckle with saurkraut and horseraddish sauce. Both meats were falling off the bone, and the portions were HUGE! 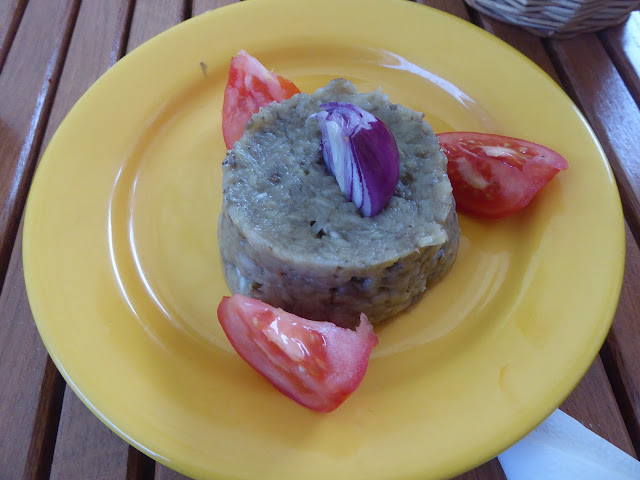 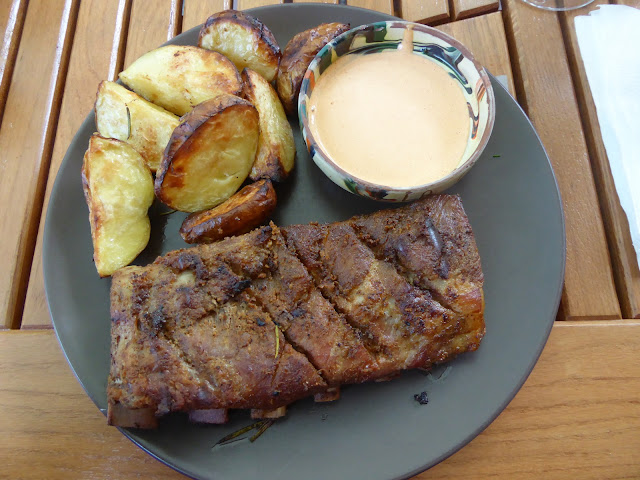 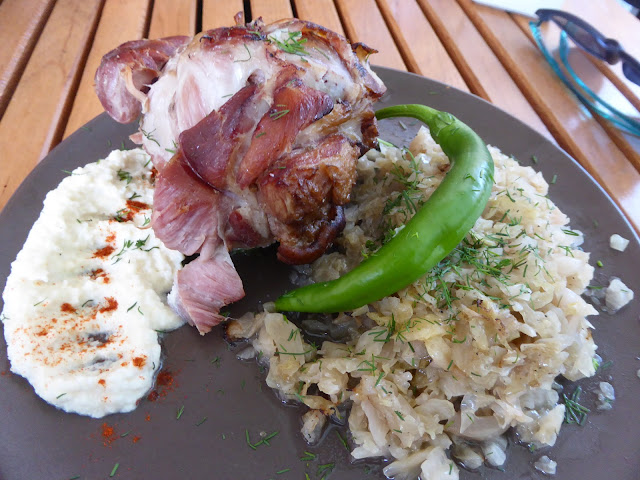 One hot afternoon we stopped in the town square to people-watch and load up on some greens! Sometimes all you need is a nice, fresh salad and a cool, fruity drink. And on the right is a picture from when we climbed the hill to the castle and came across the traditional festival. We thought it was only polite to do as the locals were doing and have a sausage and a beer. Definitely not the wurst thing I've eaten! 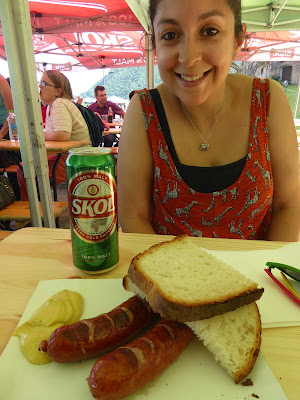 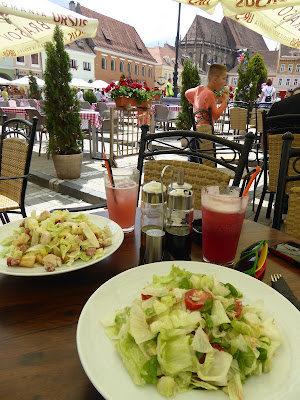 When we're on holiday, Dave has to have at least one ice cream each day (yes that's right, at least!) and this "freakshake" certainly ticked that box. Thick chocolate milkshake in a glass rimmed with nutella and cookies, piled high with cream and ice cream, with a cone of mint-choc-chip and an after eight. Even Dave thought sharing was a good idea with this one, which was a first for us! 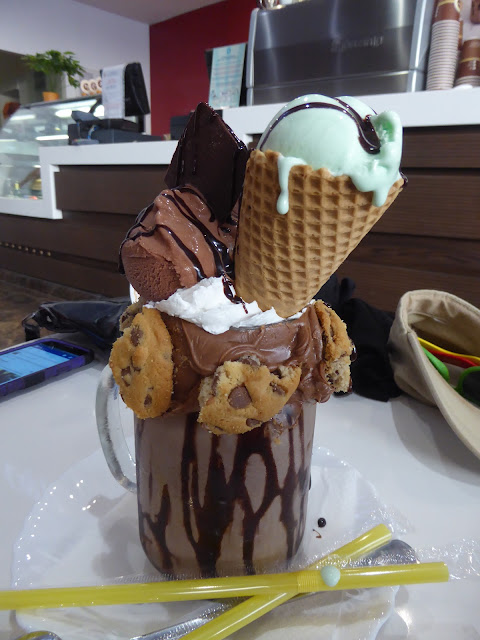 A fair amount of seafood was eaten on our trip, including this (apparently) delicious tagliatelli with shellfish at the rooftop bar of our hotel in Tulcea. The only problem was all of the shells - who wants to get their fingers in their spaghetti?! 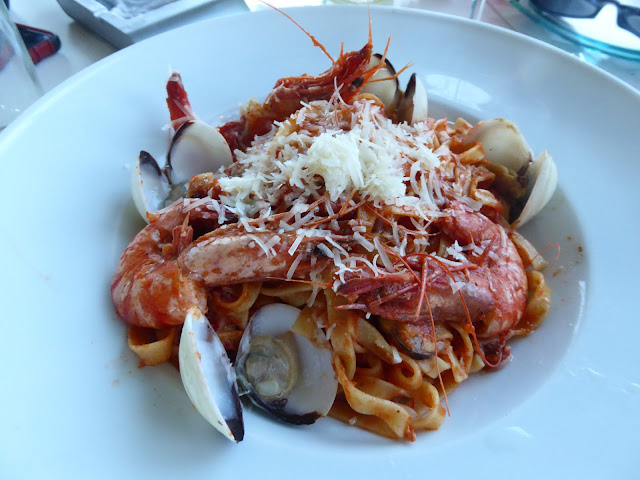 The next day during our delta tour we stopped for lunch and had a fishy feast! Some of this was catfish, but I can't remember what the other fish was. It was served with some more of the delicious garlic sour cream we had become so addicted to, and the fried fish was accompanied by polenta. For pudding we had a yummy cake/shortbread, topped with homemade strawberry jam and crumble. 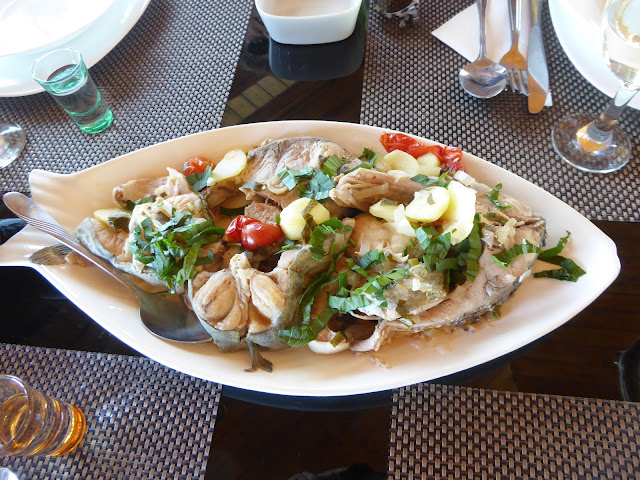 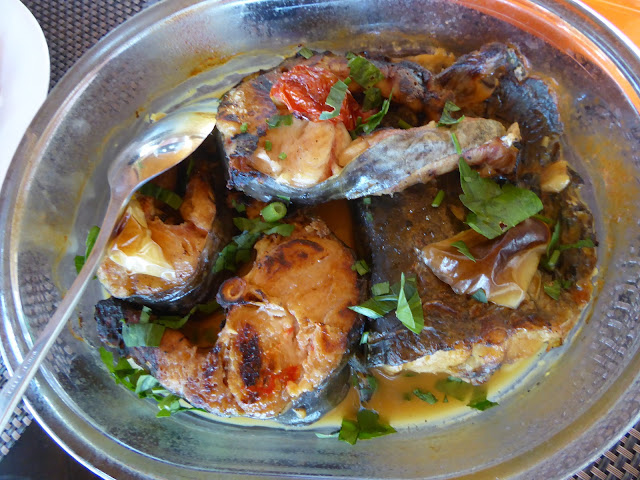 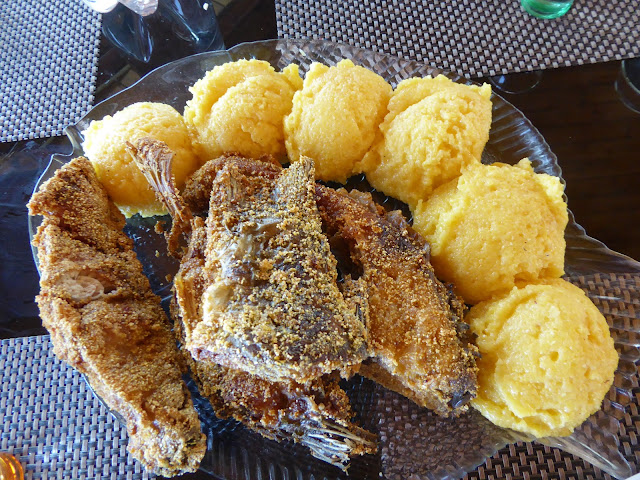 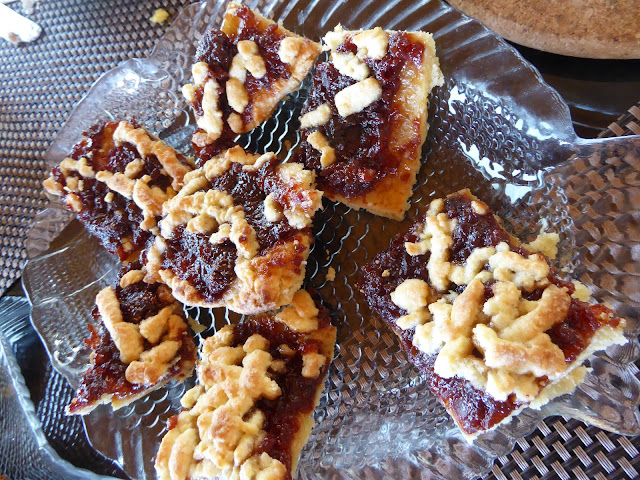 In Constanta we went to a restaurant in the marina called Reyna, which didn't look like much from outside but was super fancy inside, with a swimming pool in the middle of the outdoor seating area! I had grilled fish, probably sea bass, with roasted veggies which Dave took half of to go with his calamari and octopus combo. Both were well presented and very tasty. 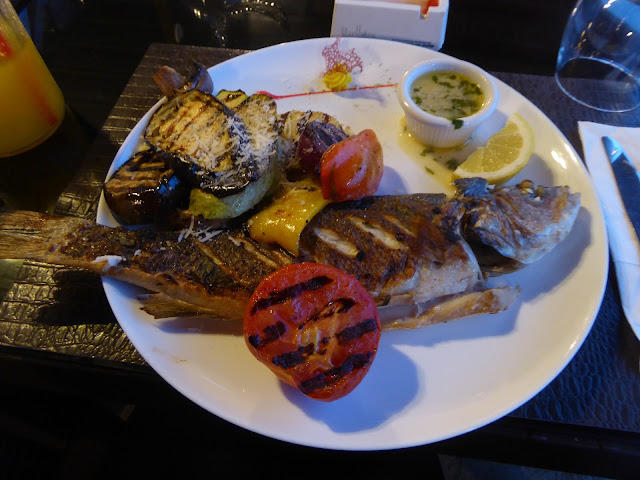 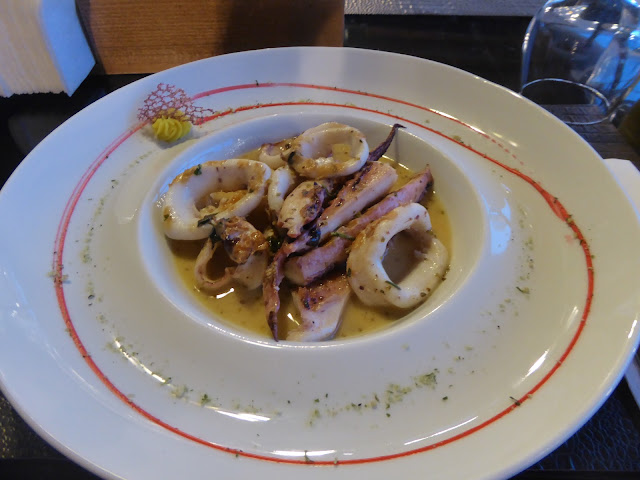 Here's another seafood-spaghetti combo which Dave had on the beach, just before it started chucking it down. I had chicken fajitas which were really good. The restaurant was huge and looked like it probably turned into a nightclub during peak season, but it was completely empty while we were there. Well, apart from the group sitting next to us, who looked like they had stepped off the set of "The Only Way is Constanta", complete with blinging necklaces and a tiny, yappy dog. 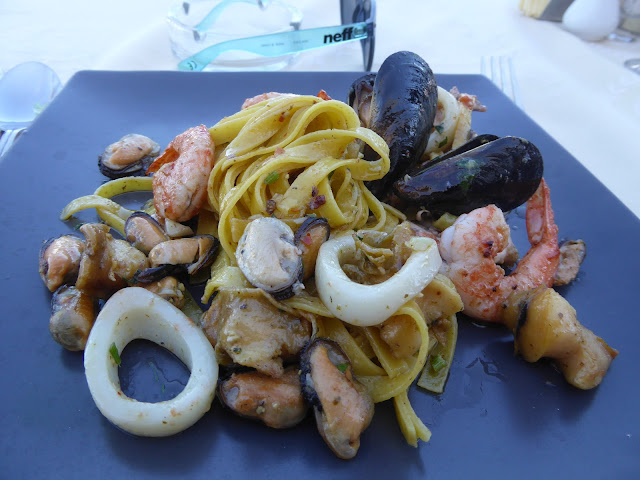 This is a meal we'll never forget. Turkey egg omelette with a freshly picked salad from Alex's beautiful vegetable garden. It was so simple but somehow tasted incredible. I'm sure the restaurant he was opening will be doing really well, if this modest breakfast was anything to go by! 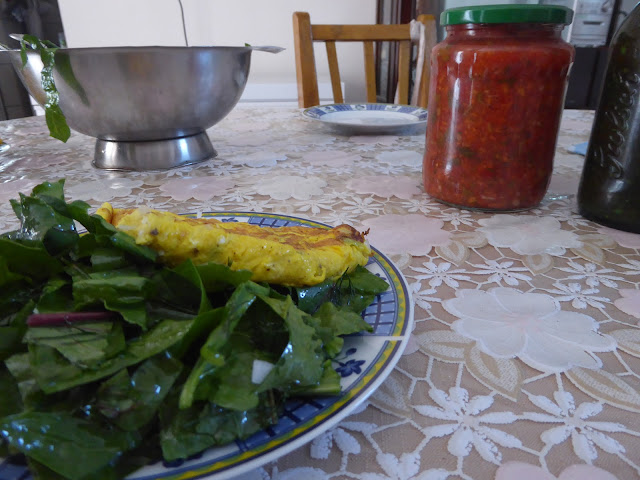 Finally we have our last meal in Bucharest. This platter of grilled Indian meats was really tasty, with a nice minty yoghurt and herby chutney. And we couldn't resist the ultimate decadence - bone marrow on toast! It was a good meal, but unfortunately it was tainted by the fact we had to wait well over an hour for it, in an empty restaurant, because the oven had apparently broken, which the waiter didn't think it was worth telling us until we were about to walk out of the door. Truly terrible service but nothing could spoil the trip for us at that point. It was an absolute delight, a true adventure and the culinary treats along the way were the icing on the cake! 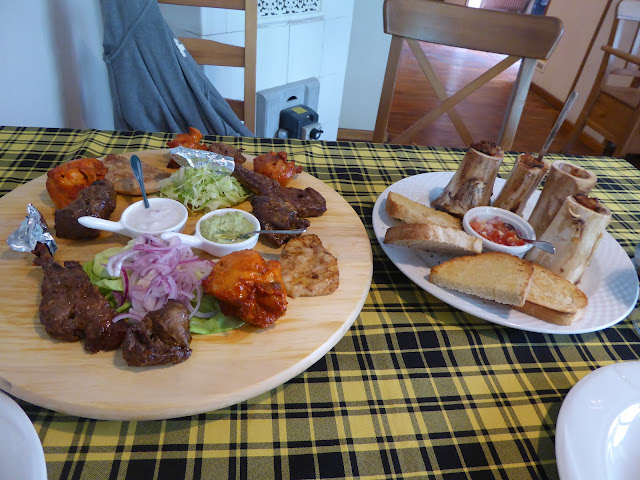