Driving around Norway (from Bergen)

I did a lot of preparation before arriving in Norway to maximise our week long stay out there. This post is all about the driving trips and tours we did around Norway from our base in Bergen. We were staying with Katie's cousin Jadz, who was on her year abroad there. She joined us for all of the day trips and we had a great time - thanks Jadz!

We utilised the national tourist website which details the Norwegian tourist roads – these are STUNNING, with lots of places to pullover and rest / take photos.

We also made sure to keep an eye out for these signs as they indicate a site of interest – it could be a quaint, small town, a museum, a large stone monument – whatever the signs led us to, they were almost always worth the extra few miles. 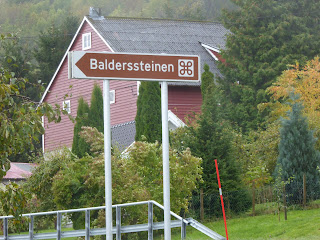 We started with a trip around the nearby island of Sotra, to the west of Bergen. This a shorter trip than others we had planned, just to get me warmed up and used to the Norwegian roads. I quickly learnt that Norway has very low levels of road rage and very empty roads. Anyway, Sotra was also a great place to spend a day - it was beautiful and a great intro to the holiday. Our first proper stop was at Fjellparken and we took a two hours through the woods to the museum and fortress ruins, and back to the car. This provided us with a great panoramic view of the island and was well worth the time and effort. 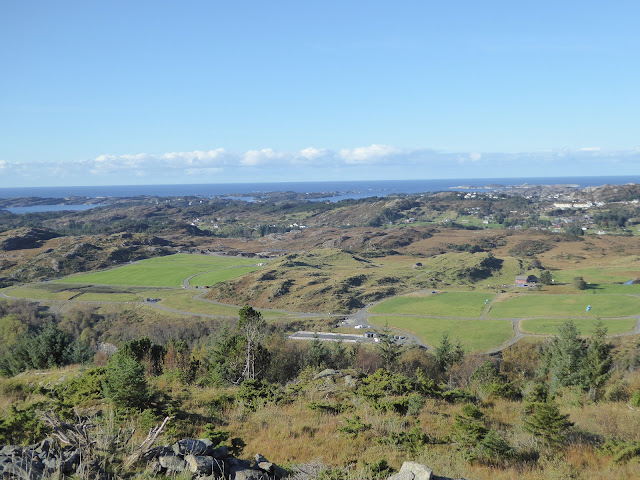 We then went to the fishing villages of Televag and Glesvaer – both are must-sees when on the island and provided a great place to eat our sandwiches. 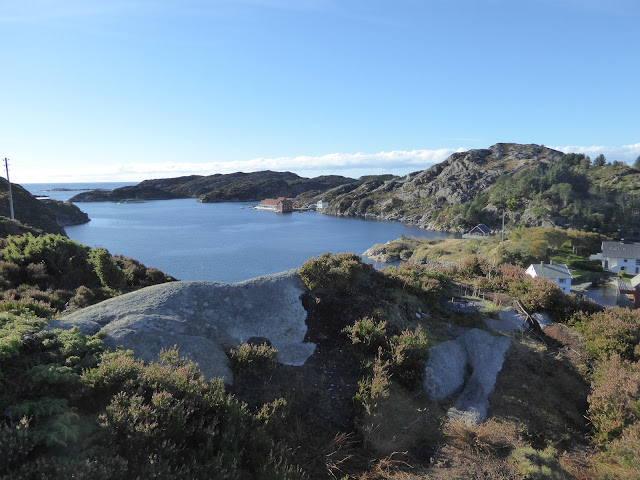 In the end, we never made it to the north of the island, as it was getting dark and we had an early start the next day!

Day two was an early start from Bergen because we had two national tourist routes to do! We were blessed (thank you Thor and the other Norse gods!) as weather was on our side with no rain all day and beautiful skies throughout. The highlights from the morning were the gold fish lake in Oystese and driving to the top of Steinsto for an unbelievable view of the Hardangerfjord.

Actually, forget that. There were many highlights - the Steinsdalstossen waterfall was also unbelievable and our minds were blown by a roundabout in a tunnel! 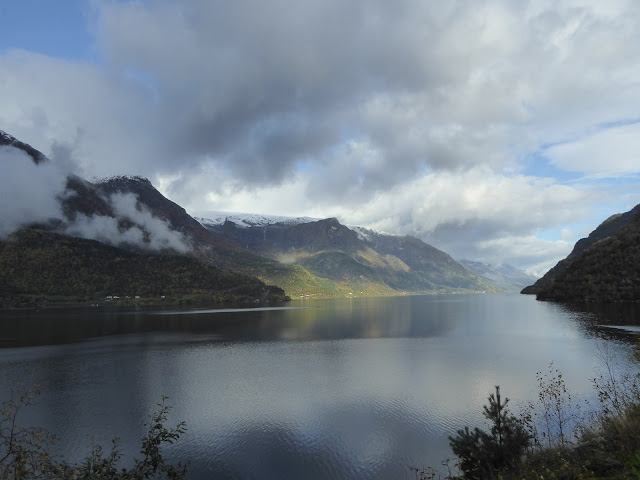 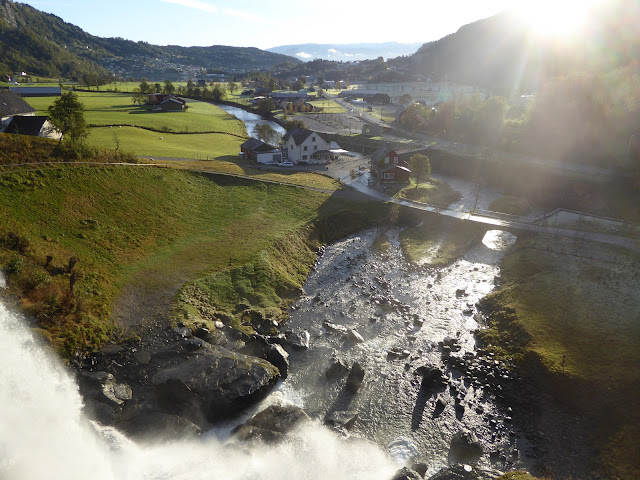 The pleasure of seeing this tunnel and roundabout came with a toll charge of 150 NOK (~£15) so it wasn’t all roses, but this was maybe the best day of the trip. The weather definitely helped but the views were absolutely breathtaking. We also had the added company of Jadz's friend Lizzie, who was not “problematic” at all :p

After the tunnel roundabout, we drove down the second tourist road of the day: Hardangervidda. Snow enveloped the road and we got treated to a snow fight and some absolutely sublime views.

We reached the end of the road and then turned around and drove back the same way (crossing the £15 bridge again!). Seeing this stunning bit of road from both perspectives was worth it, as it looks different approaching from the other direction. What a day!

We left at 6.30am and drove to Voss in darkness along the E16. It is actually a pretty cool road with some good sights that we could sometimes see when the moonlight was kind. I loved this waterfall we came across and it made my top three of the holiday (we saw ~60). 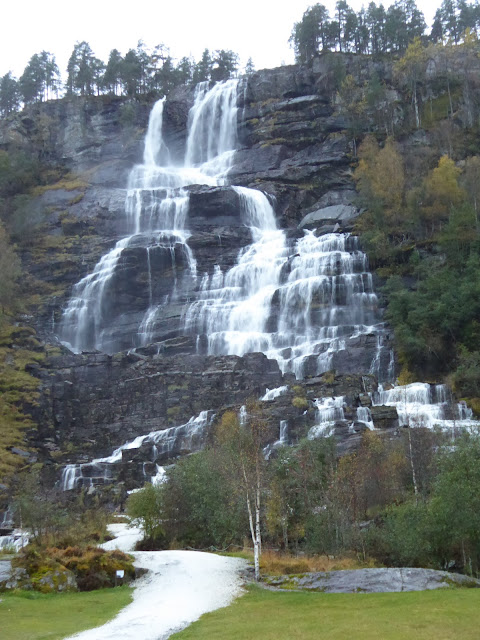 The weather wasn’t as kind this day (damn you Thor!) and the mountain pass to Vik was foggy, the views shielded from us. When we did get a glimpse, it was very impressive and we also got to use our winter tyres as the snow thundered down! We approached Vik from upon high and saw what a lovely town it was.

We then took the first of two ferries of the day (123 and 170 NOK) to Hella to drive down the Sognefjord. We were treated to some real nice views. 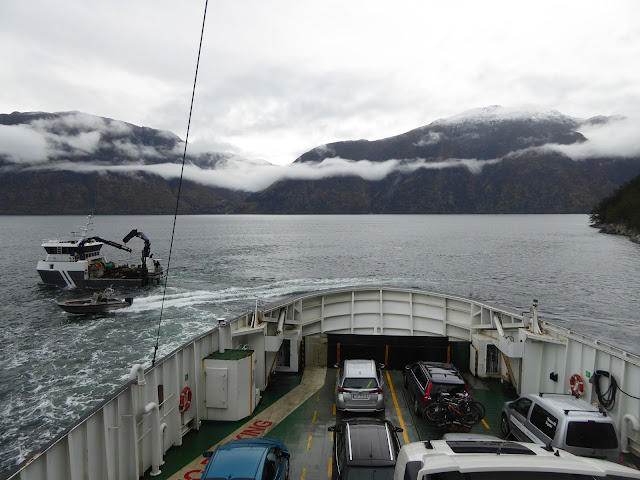 The town of Laersdal was beautiful and the surroundings were stunning.

Unfortunately the national tourist road (Aurlandsfjellet) was closed all the way to Flam so we had to take the WORLDS LONGEST TUNNEL - a whopping 24.5km long! It was eerie as fuck for the 20 odd minutes it took us to drive it. I kept wandering what would happen if there was a nuclear war while we were under-mountain and we then had to survive on our car snacks (or padkos as the South Africans call it) of shitty pretzel sticks and custard creams!

We doubled backed along the Aurlandsfjellet to see Stegastein, which turned out to be one of the best viewpoints of the holiday. A must see! 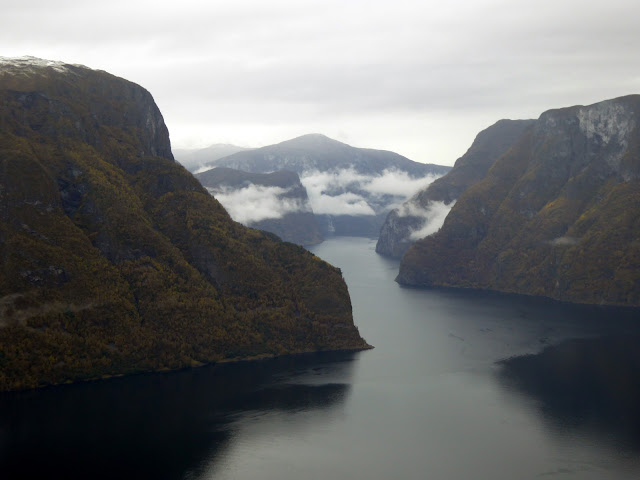 Finally we stopped in Undredal, which was quaint and known for inventing the brown goats cheese that we and the Norwegians love. It was very cute but we got there late and everything was closed, with not a waffle and cheese option in sight. We did see a 12th century church and another great fjord view though so it was well worth the detour.

Our final stop of the day was Gudvangen and we surprised Jadz because after telling her for the whole day that we'd be sleeping in the car, she discovered we'd actually booked a little lodge. It was gorgeous and a wonderful place to lay our heads! 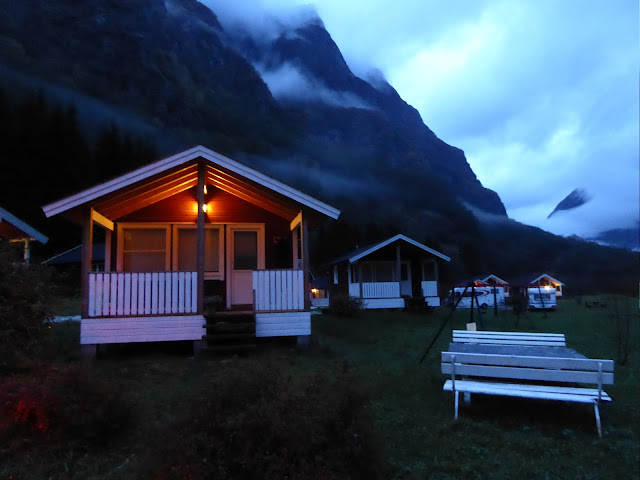 Our first stop was the beautiful roaring Skjervsfossen waterfall, which is a refreshing way to wake you up. It was a bit different to most waterfalls as you could drive right up to the top of it and then take the winding road down to see it in all of its glory. 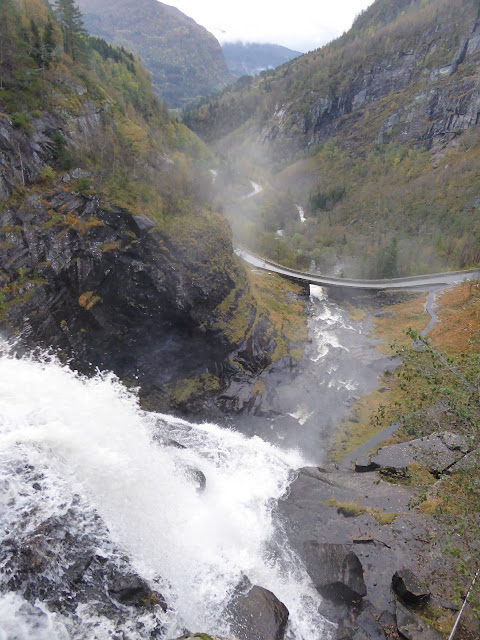 It was delightful driving down Hardanger’s roads like we did on day two, but using slightly different roads. This was the day where we must have seen 30-40 waterfalls – one benefit of there being a load of rain! We decided to hike Buerbreen at midday which took longer than expected, and we weren’t back at the car til 4:30pm. We kept a steady pace but the rain made rocks slippy and the hike had some physically challenging moments. Disclaimer: We only hike a few times a year but we are avid gym goers and are reasonably fit. This hike was harder than expected and the weather didn't help!

We had to climb rocks using ropes to pull ourselves up and then abseil down. It was worth every strain and wet bottom because the blue ice of the glacier was something else! There was a cabin at the top where we ate our sandwiches and warmed up out of the wind and rain.

After the hike, we stopped off at another waterfall, Latefossen, south of Odda that was very cool. These two streams flowed very close to the bridge!
We were now pretty tired and so took a shorter route than the map shows, heading back to Bergen via another expensive toll (100 NOK) and ferry (180 NOK).

We chose a shorter day trip closer to Bergen, with fewer tolls to end our road tripping in Norway. I considered a much longer route but the weather was shocking so settled on this simpler day. It was a good decision because the wind and rain did not cease and concealed much of the beauty of this island. We did go to the most northern point we’d ever been to when we hit the top of the island. Actually, scratch that, we went further north on day three.

This Radoy trip was the worst day but the shitty weather, tiredness, and now slight lack of novelty of Norwegian beauty probably account for this jaded opinion. 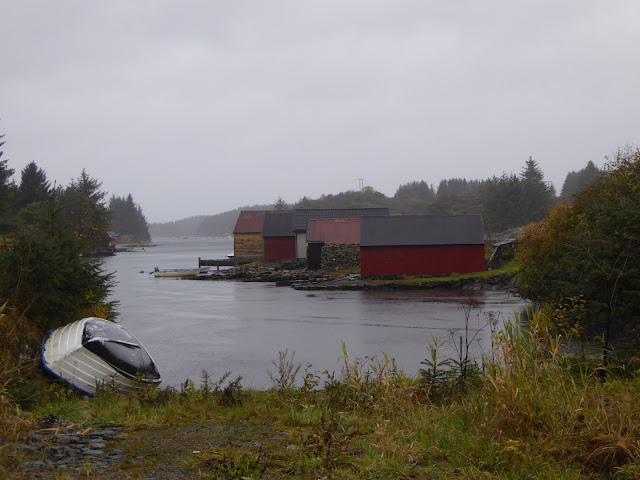 So let us know if you use any of these maps and/or have done your own Norwegian driving tours in the comments below.