Ceará In My Mouth

Final food post from our holiday! But not the last one from Brazil, don't worry. This post is about the food we ate in Fortaleza and Jericoacoara, both of which are in the state of Ceará.

Now, Rio de Janeiro might be a coastal city but there seems to be a distinct lack of fresh seafood, and what there is tends to be very expensive. With this in mind, you can imagine how excited Dave was when people told him how cheap and delicious the seafood in Fortaleza is! We had already eaten quite a lot of fish in the Amazon but David was really looking forward to eating prawns and crabs that he has heard some much about from his colleagues. I don't enjoy shellfish but I do enjoy watching Dave eat it so all in all we had high hopes! 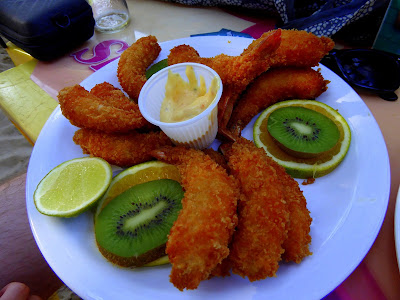 These lovely, crunchy, battered prawns were devoured by a certain someone while we were sitting on the beach at the Croco Beach kiosk/resort. It was a great place to spend an afternoon, but very touristy and therefore not quite as cheap as we were hoping. But regardless they were munched with gusto. The sauce was a generic mix of ketchup and mayo but the kiwi was a pleasant surprise! Kiwis aren't cheap here so it was a bit of a luxurious garnish.

During our whirlwind beach tour Dave convinced me to let him order a seafood sharing platter. It came with prawns (for him), langoustines (for him) and fish (for me). As you can see in picture below, the fish wasn't particularly prominent. Everything was grilled and well seasoned and David really enjoyed it. The fish was quite fishy and full of bones so not really my cup of tea but I did manage to eat half a langoustine. Now, I can appreciate that it was fresh and well cooked, and the flavour was pleasant enough (a little sweet and a bit smokey from the grilling) but just like with prawns, it was the texture that really got in my way. I just don't like that crunch...even the thought of it now is making me shudder. I don't know why, but it is really unappealing to me and so no matter how great this kind of thing is, I don't know that I'll ever be able to enjoy it. 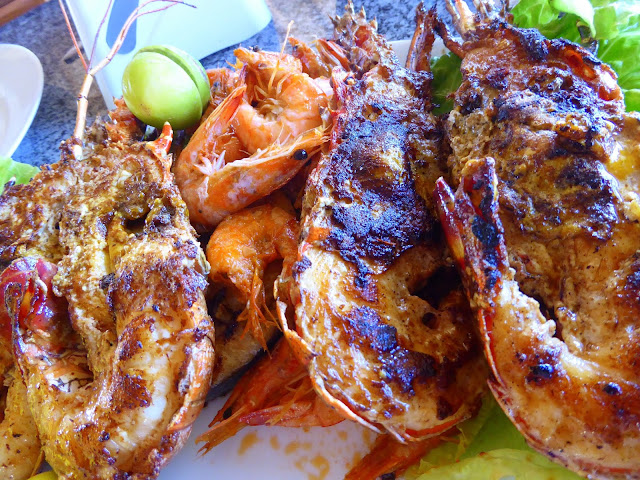 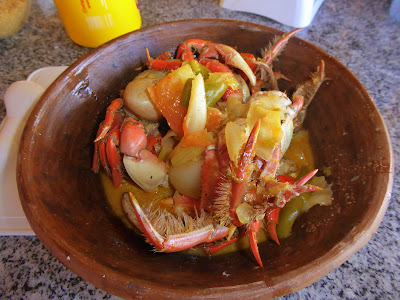 As well as the above platter, we ordered some crab. Naturally, because we always order too much! But crab is hard to come by in Brazil and it was so cheap in this restaurant that I insisted Dave get some. Unfortunately, it took over an hour to arrive and when it finally did we simply didn't have time to eat it because the coach was leaving. It looked and smelled amazing though. Oh well, maybe next time!


Now, this next restaurant was a little decadent but we went at the end of the holiday when Dave was starting to get the blues about going back to work. It is called Coco Bambu, and there are several branches in Brazil, with one opening soon in Rio. It was very highly rated and when we arrived the queue was massive so we were really excited. 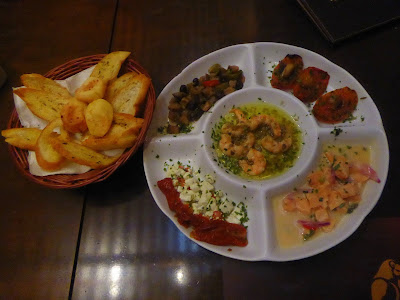 We started with a kind of anti-pasti plate of sundried tomatoes and Brazilian halloumi, roast aubergine in tomato vinaigrette, herby marinated prawns, fresh grilled tomatoes and a really delicious salmon ceviche. It came with various breads and we demolished it in no time. The salmon was the stand-out on the plate, but everything was really tasty. Great start! 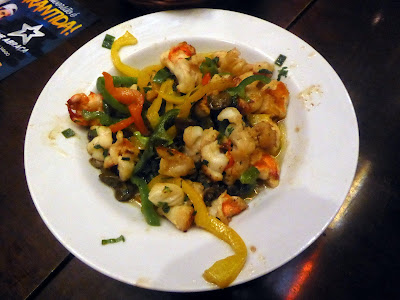 Next we shared another dish from the starter menu - lobster in butter with capers and mixed peppers. I was apprehensive about the lobster for obvious reasons but actually it was quite soft and not too crunchy. This was a really tasty dish and the flavours all worked very well together. So far we were very impressed with the restaurant, even though it was quite pricey. 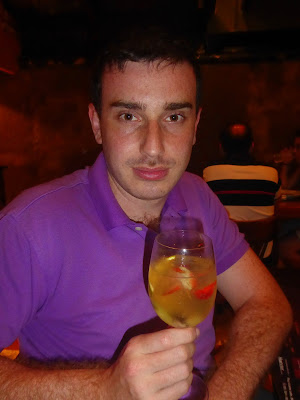 I feel I should mention the menu because it was huge! It honestly took us ages to choose our dishes because there were probably about a hundred things on the menu, a lot being very similar with just slight variations to the sauce or accompaniments. But we were happy to take the time to read the whole thing, especially once our white wine sangria arrived! It was really delicious and full of fruit. Another extravagance but hey, what are holidays for?! We're not backpacking anymore you know. Anyway, we chose a main to share and it's just as well because of course, it was big enough for two. I wish that was clearer on all menus in Brazil, because sometimes it's really hard to tell just from the price. But we had suspected this was the case based on the dishes being taken to other tables so on this occasion, it wasn't a surprise.
Well, we finally decided on a fish dish, although it didn't specify what fish so this is a mystery! Grilled fish, with a sauce of mango, passion fruit and ginger, served with broccoli rice and pumpkin puree. Oh and it was topped with chopped cashew nuts. A bit of a weird sounding combo but that just made it all the more appealing. I don't really know what to say about this meal other than that it was soooooo sweet! The pumpkin puree was okay but tasted more of the cheese that was melted on top of it than anything else. The rice was nice but there wasn't as much broccoli as I have had before. The actual fish was meaty and tasty but the sauce...oh my, the sauce. Objectively it was a really tasty flavour, with big slices of juicy mango. Unfortunately, it was so sweet and creamy that it was basically like a fruit custard or melted ice cream, which believe it or not didn't really go so well with the fish! Such a shame. 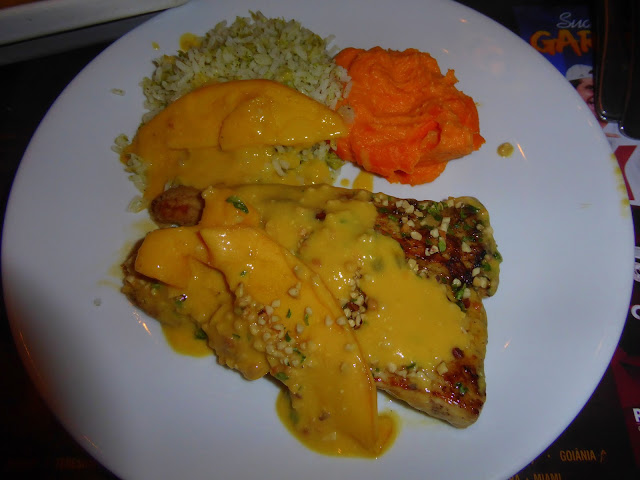 Moving on, the photo on the left is of some seaside snacks we had while sitting by a lagoon during our three beaches tour. Sliced sausage and Brazilian halloumi. Both grilled to perfection over a few coals in a bucket. On the right is an epic pile of three ice creams, from a shop that boasts fifty flavours! And during the half an hour it took us to decide, I think we tried almost all of them. In the end we settled for ferrero rocher, dulce de leite and one called Obama, which was hilariously a mix of dark, milk and white chocolate with chunks of chocolate and caramel. Delicious! 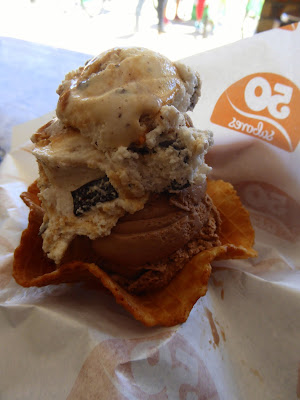 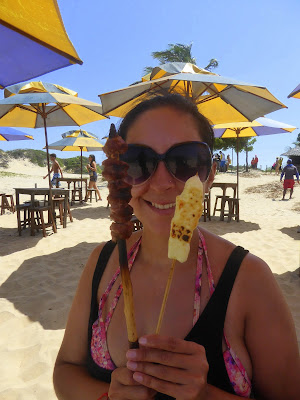 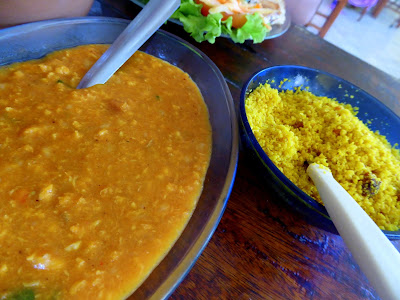 I'm going to whizz through these next things because this post is getting too long! First up is a tomatoey stew of sting ray, if you can believe it! We got it in a really really cheap restaurant in Jeri and it tasted good, if a little basic. 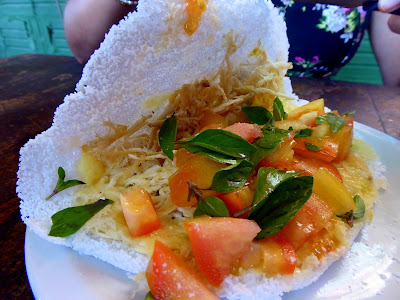 Next is a tapioca pancake filled with chicken, tomato, mozzarella and basil. Tapiocas can be quite dry but this one was really tasty and a great little snack to keep me going until our lovely romantic dinner with the Swedes! 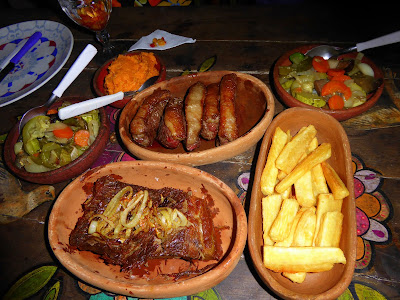 And here it is - a feast for four from the delightful little restaurant Na Casa Dela in Jericoacoara. It was all outdoor seating in a beautifully decorated garden with fairy lights and other wonders hanging from the trees. We got two types of beef which were obviously delicious and then as many vegetable sides as we could! I would highly recommend this restaurant because the food and service were both brilliant. 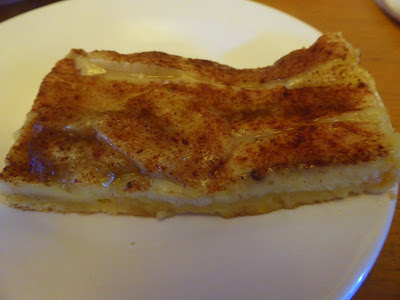 This banana cake is apparently a bit of a famous dish from Jeri. I am told it was nice enough, but very sweet and nothing special. Just a biscuit base with condensed milk and bananas on top, sprinkled with cinnamon and baked. Nothing to complain about of course, but nothing Dave will be looking back on and pining for.
On the left is a well known Brazilian dish called vatapá. It's a seafood stew with a coconut sauce that had an incredible depth of flavour. No chilli, but a lot of creamy, rich sauce and apparently excellently cooked prawns and lobster. On the right is what I ordered - cashew-crusted (perfectly cooked) steak with a black pepper rosti. Absolutely delicious! Both dishes were from a great restaurant in Jeri called Tamarindo. 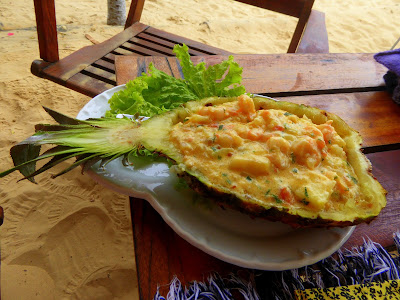 Dave couldn't leave Jeri without trying this dish we had seen at so many restaurants there - prawn stew in a pineapple! He really enjoyed it, although I think the big chunks of pineapple maybe made it a little too sweet at times, but then we have come to accept this as something we need to get used to when fruit is involved in any Brazilian dish.

Our final mean in Jeri was from a rough and ready fish restaurant called Peixe Brasileiro, where Dave personally selected a fish that had been caught that morning, which was then grilled simply and served with lime and a few sides. I have no idea what kind of fish we had but it was flaky, creamy and delicious. And there was a band playing at the cafe across the tiny little street so we got some free entertainment too! A great way to end a lovely few days in sandy, sunny Jericoacoara.