Now that we know we will be leaving Brazil soon, we have been putting a lot of effort into ticking everything we can off our Brazilian Bucket List. We’ve already blogged about some of it and now it’s time to tell you about my recent cooking class.

Having researched it online, I decided to book a class with Cook In Rio. This has a lot of great reviews and informative videos online and the website was clear and easy to navigate. All good signs! Laure, who we met in the jungle, was still hanging about in Rio so I invited her along to join me and we had a great time.

Cook In Rio offers two types of class, each four hours long. I decided not to do the feijoada class, as this is not my favourite dish and is something that I think would be easy enough to recreate at home following a recipe anyway. So we went for the moqueca class. Moqueca is a dish from the northern Brazilian state of Bahia, which we recently visited on our 3-week holiday. We ate this warming fish stew in Lençois and really enjoyed it. The recipe is at the end of this post if you fancy making it!


We weren’t really sure what to expect with regards to the size of the class, as it was just a random Wednesday in the middle of “winter”, so surely it wouldn’t be fully booked…? Actually I don’t think we could really have fitted anyone else into the little room, but having ten of us there gave the whole night a bit more of a sociable atmosphere, as we were a mixed bunch from different parts of the US and Europe so conversation was easy and interesting.

Simone, the teacher, was very Brazilian – loud, talkative, open and funny. She was very inviting and gave us a LOT of information about the culinary style in Brazil and the things we were cooking. I learned that bay leaves are used a lot to aid digestion, which is important because of all of the heavy foods, such a beans and red meat. We were told that marinating meat and fish is important in Brazil not only for flavour, but to make sure all the bacteria on the food is killed! As a general rule, fish is marinated in lime juice, chicken and pork in white wine vinegar, and beef in red wine vinegar. She taught us that the word ‘salary’ has its roots in the word ‘salt’, which is how many people were paid way back when.

I have to say that had Simone not been so knowledgeable about the food history of Brazil, and generally so entertaining, I would probably have been a little disappointed with the experience. There just wasn’t really much cooking involved. The things we made were pretty simple (which I’m not too surprised about, having eaten a variety of Brazilian dishes), and there was only one cooking station, so rather than all of us cooking while Simone gave instructions, we just took it in turns to do a bit of the prep or stirring while she took the lead.

It was a good experience and the food was tasty. I suppose the class isn’t really aimed at people who have been living and eating in Brazil for as long as me, but rather for people who are on holiday and want to do something a bit different. Whatever my expectations had been, I left happy and full and I count that as a success! 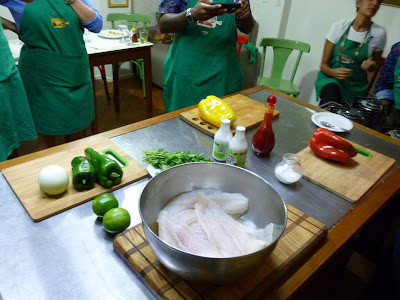 *I don't know how easy palm oil is to find outside of Brazil so my suggestion would be to use vegetable oil and then add a teaspoon of sweet paprika at the end of frying. This will give a colour and slightly musty flavour that is similar to the oil.

**Traditionally this dish is made with whole fish, cut into pieces. It is also often made with prawns, so you should feel free to experiment with different fish and seafoods - the world is your oyster after all!