Minas Gerais In My Mouth

As David already mentioned in a previous post, the food from the state of Minas Gerais is considered to be particularly good. Although we only had a handful of meals during our trip, we did our best to sample as much as possible and here are the highlights: 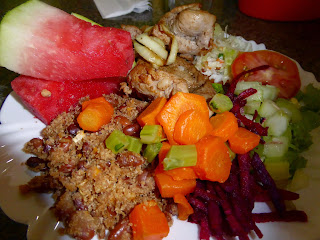 Our first meal was in Sete Lagoas, on the way to the caves. David spotted a popular looking place that was similar to the kilo restaurants I described last month. I say similar because you didn't pay-per-weight, but rather paid £2.50 for as much of the buffet as you wanted, provided you only had one piece of meat. There was then an extra (very small) charge for each additional piece of meat. The food was really nice and we tried a couple of Minas dishes - okra and chicken, and beans with quinoa. Both were very tasty and a great start to the culinary adventure.

One of the main dishes we were really keen to try on this trip was feijão tropeiro - everyone I spoke to before we left mentioned this as one of the best Minas dishes. We tried it several times and I have to say the last time was the best by far but regardless, it is a really delicious way to eat beans. As you can see in the picture below, it's a dry dish of beans, egg (scrambled or fried), sausage, cabbage and sometimes pork scratchings. Everything is mixed together with the ever popular, sand-like farofa, which adds a lovely nutty flavour and brings the whole dish together. You can probably tell I was a big fan and Dave is always happy to eat a dish that contains multiple sources of protein! 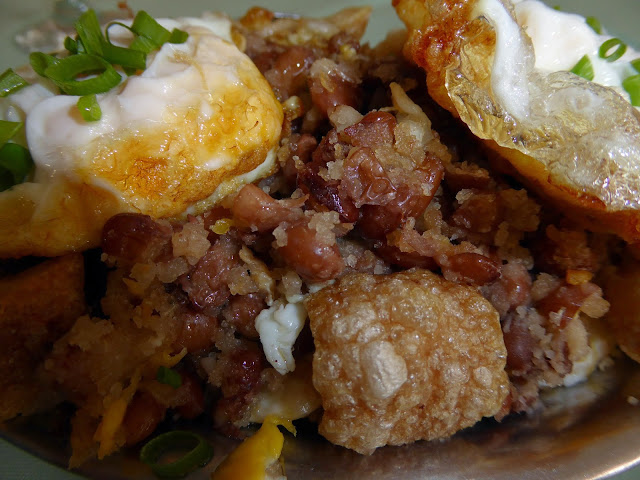 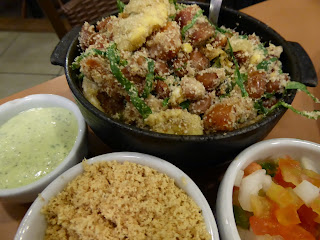 Here is some slightly inferior (but still lovely) feijão tropeiro that we had at a churrascaria in Belo Horizonte. This type of restaurant serves "barbecued" meat. It is not the all-you-can-eat meat rodízio that you know as Brazilian BBQ in the UK, although that does exist here. Basically you order various cuts of meat by weight to be grilled. There is usually a minimum weight that you have to order per cut. We got some sausage, a wonderfully tender chicken breast with garlic sauce and some chicken hearts (for Dave). 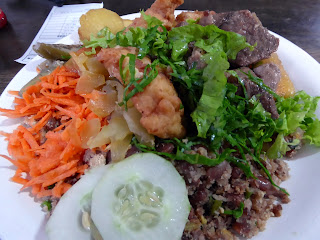 Next up was a lunch in Ouro Preto, where we opted for a restaurant that had a queue out of the door and down the street. Obviously. It was another buffet, with a flat charge for as much of everything as you wanted. There were a lot of typical Minas dishes: pumpkin stew, steamed pumpkin, okra and chicken, feijão tropeiro, quinoa and beans, cabbage, polenta and more. Our plates were piled high and a bit of a mess so the picture isn't great but I just want to prove to you that we eat vegetables whenever we get the chance!

One of the most famous foods from Minas which is eaten and loved all over Brazil is pão de queijo. This "cheese bread" comes in the form of a lovely crisp little roll made from cassava flour and cheese (often parmesan), with a soft, gooey centre. It is enjoyed as a snack at any time of day but is particularly popular for breakfast. As simple as it may sound, there is one problem we Gringos have when ordering this oh-so-common delicacy - pronunciation. There is a subtle but VERY important difference between the way to say "pão" and "pau". The former means "bread" and is a nasal sound that Brits are not used to making, whereas the latter is a much more comfortable, Batman and Robin sounding "POW!". But we're obviously foreign so surely we can be excused this tiny error...right? Wrong. Unfortunately, unless we pinch our noses when we order, we run the risk of asking for "cheese dick". Yup, "pau" means stick/peg/bar and is a very common slang word for a penis. Thanks Brazil. 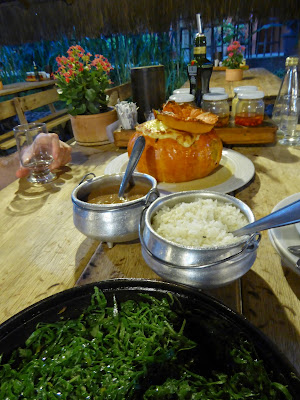 The state of Minas Gerais has a lot of farmland, and we visited a restaurant that has a real farm-house feel. It is called Restaurante Xapuri and it was beautiful. There is a horse-riding field at the back of the restaurant and hopefully these pictures will give you an idea of just how rustic the place is. We ordered a pumpkin, stuffed with carne seca (a kind of dried beef) and topped with the famous Minas cheese that everyone raves about. It was huge and we had to take half of it back to the hotel for supper but we didn't mind at all because it was delicious. It came with rice, bean stew and garlic-fried cabbage - well worth the drive from the city centre if you ask me! But then again, I wasn't the one driving! The restaurant is huge and has a shop where they sell the many sweets, candied fruits and other desserts that they make. We were too full to try any of them but they looked lovely. 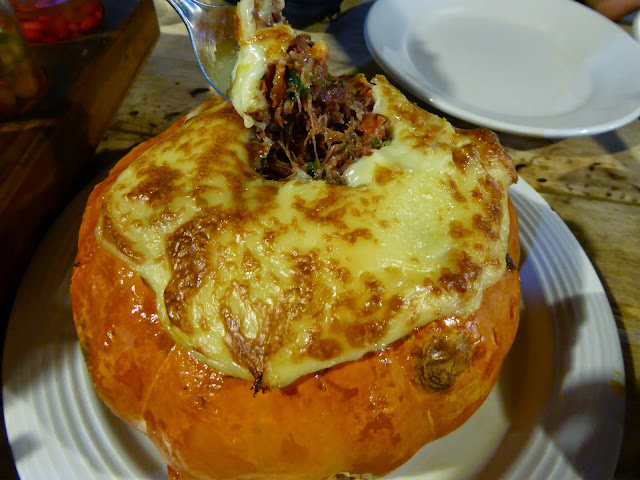 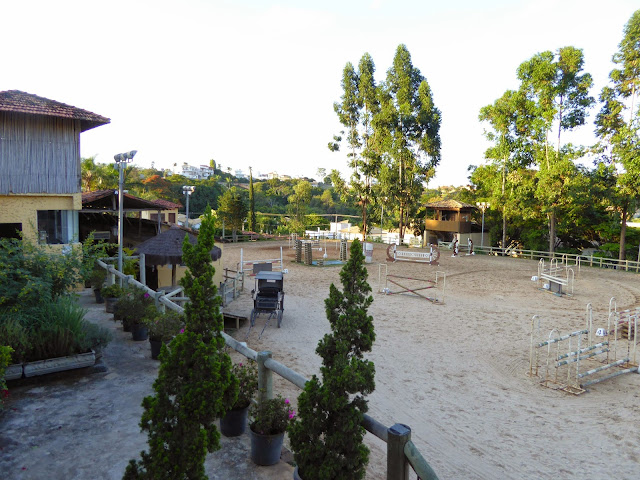 So that's all of the important Minas food done but there are just a couple more things we'd like to show you:

First up is was a dish of wonderfully tender beef, coated in a very popular cream cheese here called catupiry. It doesn't have a strong flavour and is lovely a creamy. Surprisingly, it makes a good pizza topping. Next to it is broccoli rice. 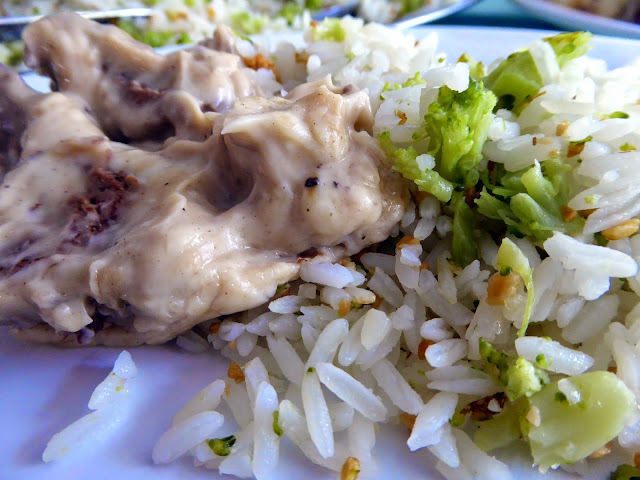 Next up is the obligatory meat-on-stick, although in this case it was more like a pork sword! Pretty standard grilled meat but with the interesting addition of a farofa coating. I hope you know what farofa is by now because I'm not explaining it again! 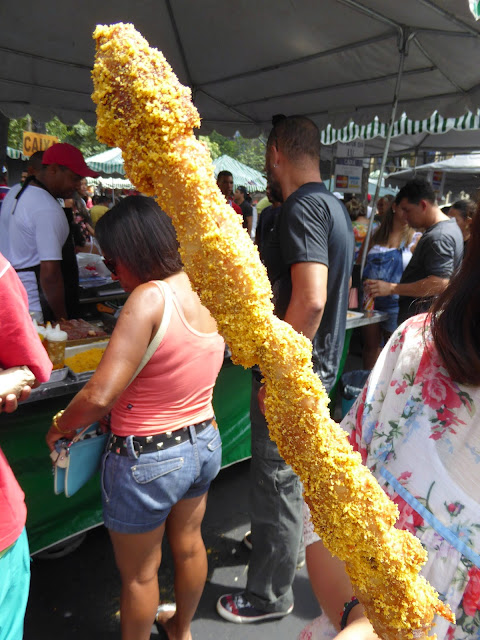 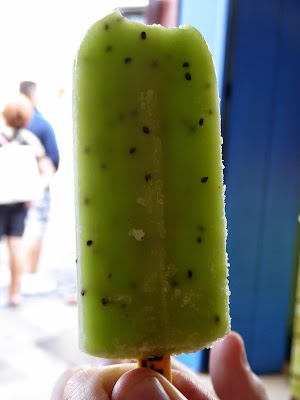 This cheeky little number is a kiwi ice lolly that we rewarded ourselves with after a long day of sightseeing in Ouro Preto. The reward may have also involved a passionfruit and lemon ice lolly...and a lychee one too! We were hot and tired and deserved it, trust me! The shop had huge freezers with what must have been over a hundred different flavours of ice lollies in and a lot of them were Brazilian fruits that I had never even heard of! One of the nice ladies that worked there took pity on my bemused face and let us sample a couple of the Amazonian fruit flavours. She thought she was being kind but let's just say there is a very good reason those flavours are not exported to Europe! I didn't know so many foul, bitter tasting plants were considered edible! 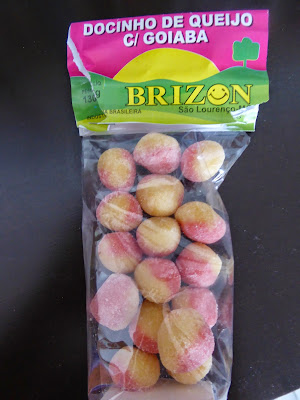 And finally, if we hadn't had enough weird food for one trip, we bought some sweets. This flavour combination is often called "Romeo and Juliet" and comes in the form of ice creams, cakes, sweets and probably other stuff too. I have no idea why it is named after the greatest love story of all time (excluding Brad and Angelina of course) because it is weird and disappointingly average. Cheese and guava. A kind of concentrated guava jelly is commonly eaten with cheese and crackers here, but why anyone felt the need to make sweets out of it is beyond me!
So there you have it. A true Brazilian foodie food post about food from Brazil.