What a week! I won’t bore you with the details of my journey to Rio, other than to say it was long and uneventful. Uneventful is always a good descriptor for a flight though isn’t it? In fact, the fewer noteworthy events when hurtling through the air, thousands of feet above the ground the better really. I can’t even remember which film I watched, which just goes to show what little impression the whole experience made on me. Well done KLM.

I got a taxi from the airport to the apartment complex, and was delighted to see the locals had thrown a welcoming party for me on the beach front opposite! I gave them a wave as I got out of the taxi and headed up to the flat. First impressions were good – the flat is lovely and airy, bright and spacious with lots of storage room and a long balcony that gets a lovely sea breeze.

I was pretty tired after the travelling so took my time getting settled and by the time we went outside the welcoming committee had dispersed. In a way I was glad though, as being the centre of attention is a lot of pressure and I wasn’t up for all that small talk. So Dave and I just had a couple of caipirinhas (a typical Brazilian cocktail or sugar cane liquor, lots of fresh lime and some brown sugar) and chatted the night away.

The next morning we headed down to the beach. It was a bit overcast and not as hot as I had expected but the sea was lovely and warm, the water was so clear and the waves were super strong! There were quite a lot of people around as it was the middle of a big Brazilian national holiday and the end of the summer holidays for the school kids. Dave had a whale of a time getting knocked about by the waves and then we headed back to the apartment complex for a dip in the pool. For lunch, we went back to the kiosk on the beach front where we had been the night before. It is literally just across the road from the apartment and the man there is very friendly and serves a great agua de coco. He holds the refrigerated coconut in one hand and with the other uses a machete-like knife to hack the top off with three swift chops. It’s such a refreshing drink. We ate chicken, garlic bread and cassava chips before heading to the supermarket to stock up on some essentials.

That evening, Dave took me out for a surprise. I had no idea what we were doing but it turns out the people of Rio de Janeiro had organised yet another welcoming party for me under the guise of Carnaval! Unfortunately, the weather took a turn for the worse and everyone agreed Dave and I should go home and try again the next day. Apparently they carried on with the party but it really chucked it down so I’m glad they suggested we rearrange.

On Monday morning we went for a walk and met an American family who told us about a bloco (street party) that had been organised for me by the residence of Barra (where we live) that afternoon. We quickly went home to change into some more festive clothing and then went back out to the party. Blocos are very common during Carnaval season and usually involve live music and lots of dancing. This one had been set up on the street along the beach front, where a temporary stage had been built and porta-loos installed for the hundreds, probably thousands of people that had come to meet me and introduce me to the area. It turns out, as soon as the men of Barra heard I would be moving here, they hit the gyms hard and it was most pleasing to see the results of their labour on full (and I mean FULL) display that afternoon. There were some freebies being handed out (fans, inflatable guitars, condom hats) and generally just a lot of singing, dancing and merriment. A big part of carnaval are the costumes, or fantasias in Portuguese, and it seems this involves a lot of cross-dressing for the men and generally very little clothing for the women.

We went home for a nap after a few hours and prepared ourselves for the long night ahead. At about 6pm we headed back to where we went the night before – the Sambódromo. This is a thirteen metre wide, 700 metre long purpose-built road, lined with concrete stands that apparently seats up to 90,000 spectators. Armed with cushions, snacks and a camera, we settled down to witness nine hours of just unbelievable parades. David is going to write a post (or three!) about the actual parades with pictures and videos, but I’ll give you the general gist now. Twelve samba schools made it to the finals and their performances were split over two days. We definitely made the right decision to go on the Monday as it didn’t rain, the parades were all apparently of a higher standard and we got to see the school that ended up winning. Each school started their parade at one end of the road and took about an hour and a quarter to dance their way to the end. We were sitting right in the middle so got a great view for about 45 minutes of each parade. The costumes and the music…well, you’ll see in Dave’s posts but let’s just say I was truly, deeply touched that the city was so excited to meet me and had put so much time, money and effort into making me feel welcome! 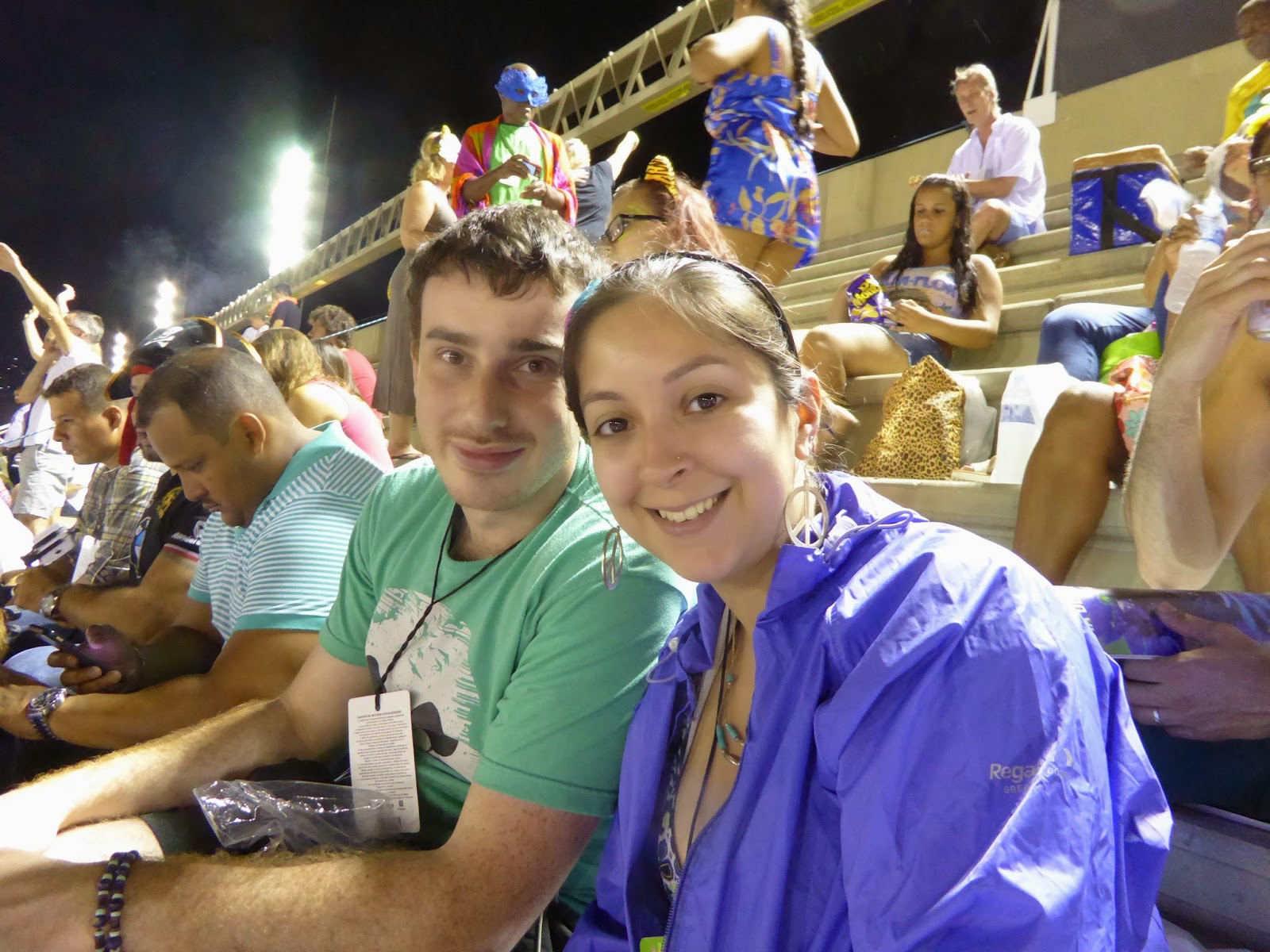 We rolled into bed at 7:30am on Tuesday and spent the day recovering from the awesomeness of the night before. In the evening, we were picked up by some of Dave’s workmates and taken to another bloco in Ipanema. This was different to the one we went to before – it had live music but rather than being played from a stage, it was preformed from the back of a truck, with a band marching behind and a huge crowd of funkily-dressed party-goers dancing along with it. Dave’s friends were really fun and introduced us to an interesting drink, as modelled below by Dave. 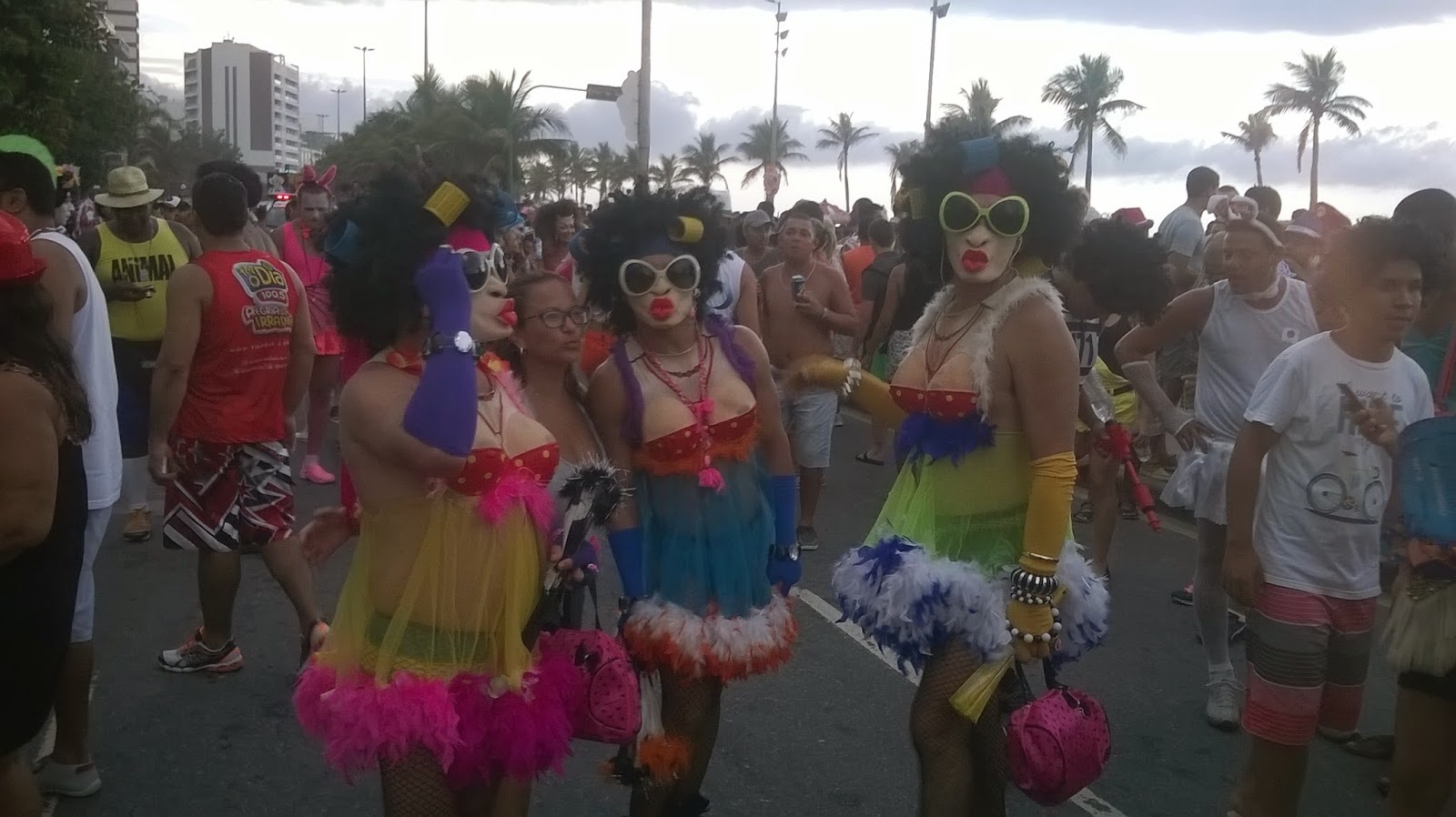 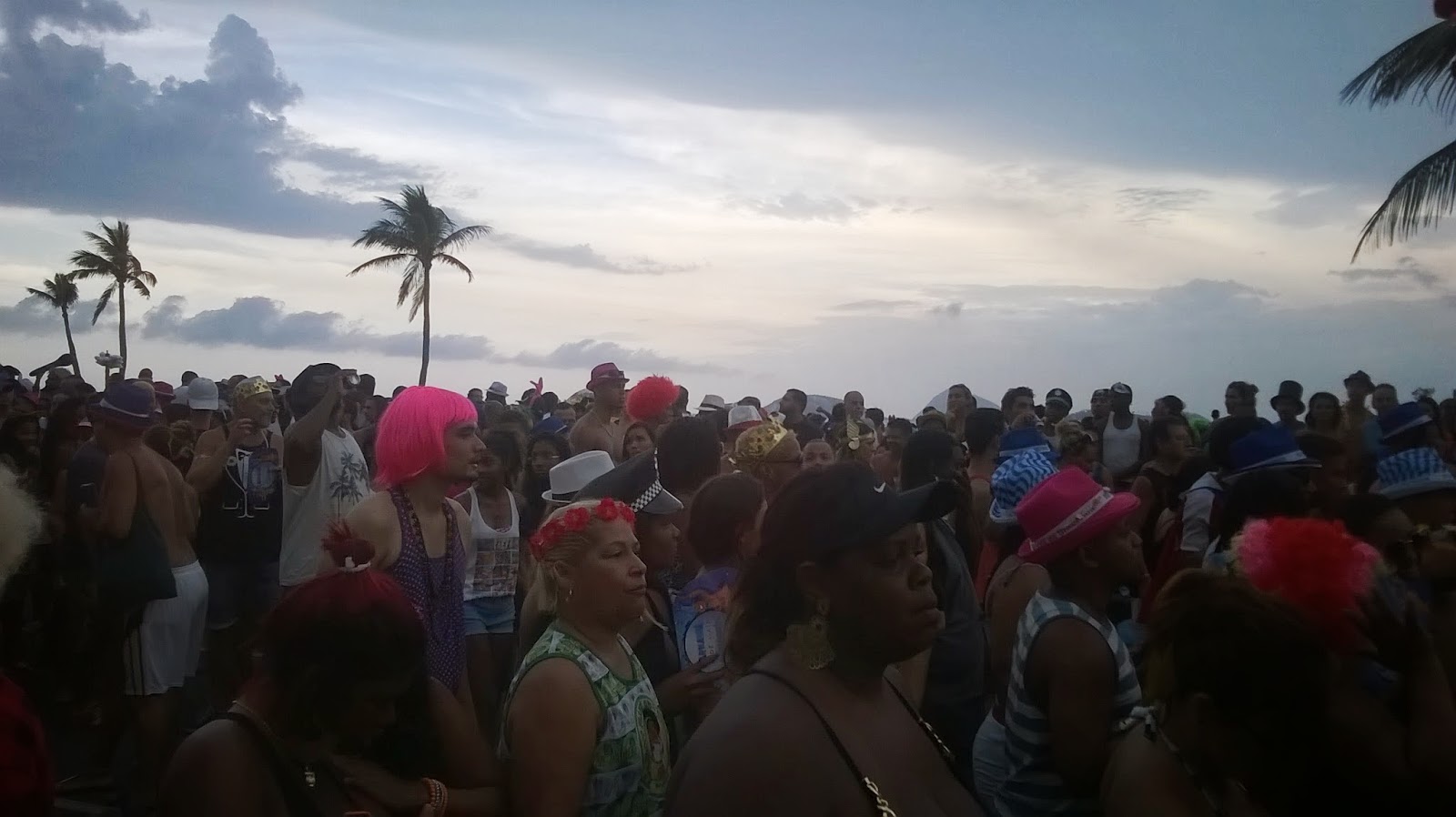 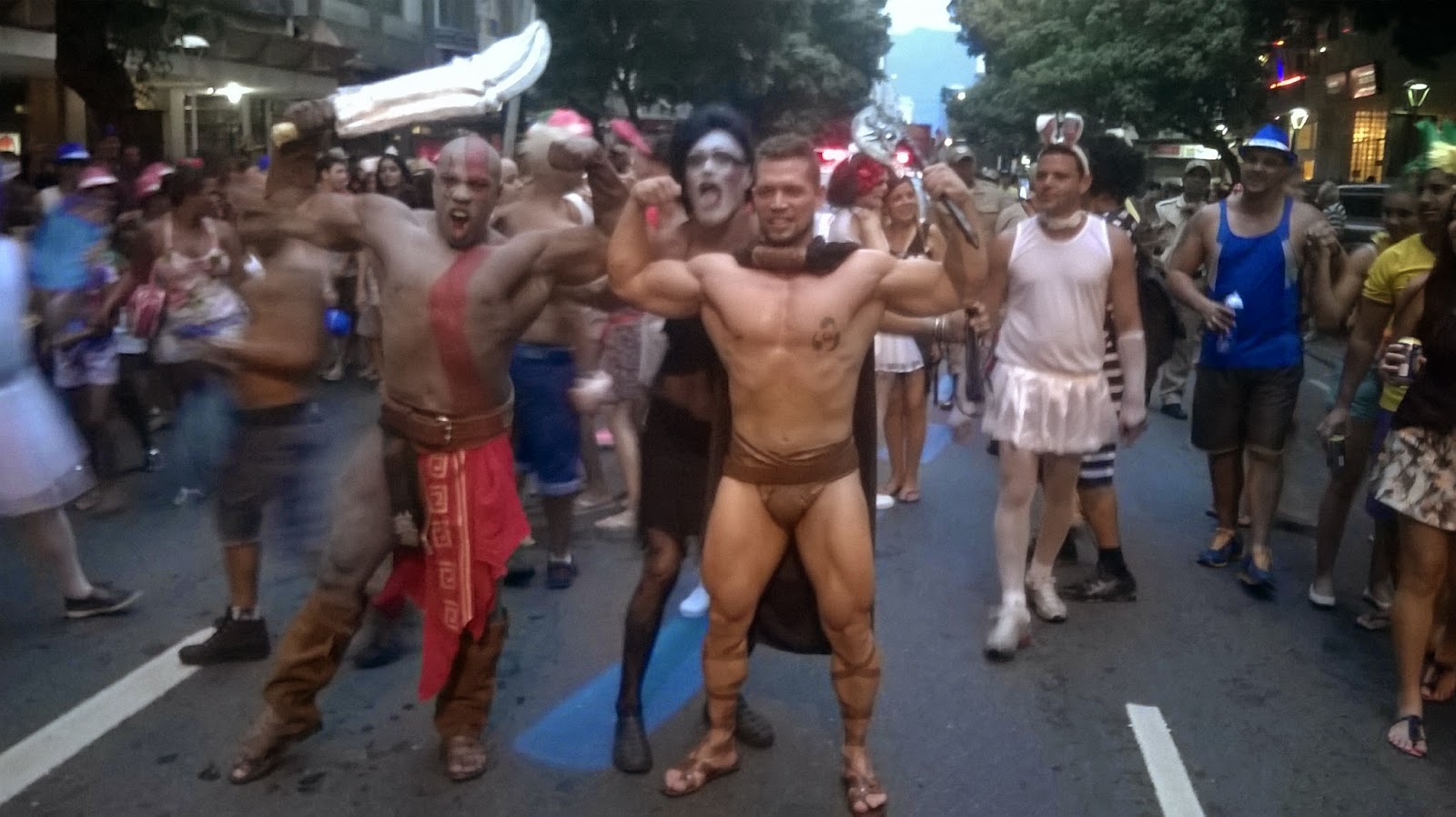 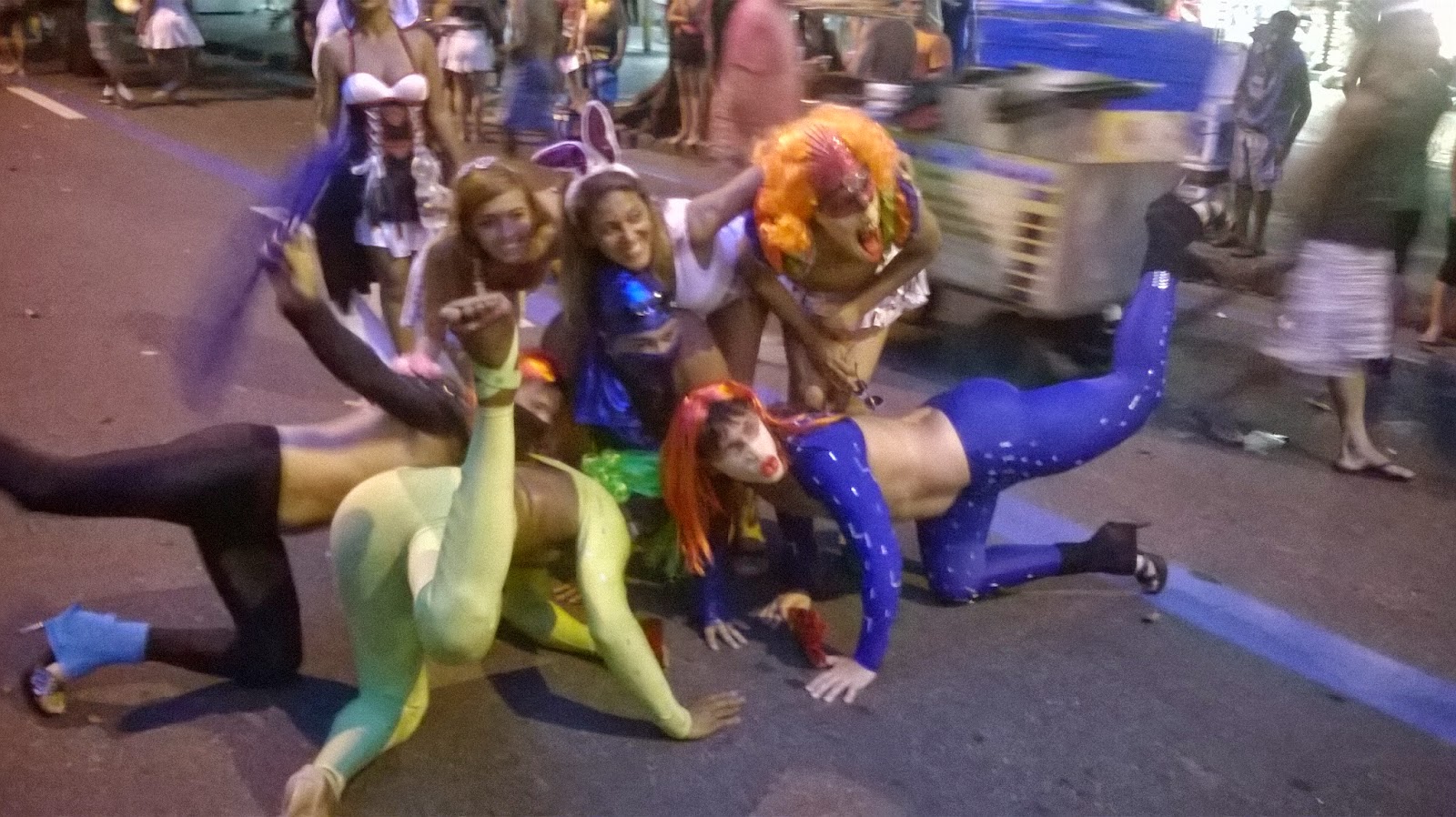 After an hour or so of dancing and gawking at costumes, we were suddenly brought back down to earth by a truly tropical downpour. We were all completely drenched and sought out shelter and food in a barbecue restaurant. I’ll detail this meal at some point in a food blog but basically it was top quality steak and chips with rice and a weird side dish. After it stopped raining, we got back in the car and set out to find another bloco. This one was in a park and seemed a bit calmer but the music was really good and the dancing we saw was very funky. The costumes, music, dancing and general free-spirited nature of Rio during Carnaval was really fun to witness and it’s crazy to think these celebrations were happening all over the country for 6 days!


By Wednesday I was feeling overwhelmed by the hospitality and generosity of the Brazilians and all of the parties they had thrown in my honour. I can’t believe the whole country arranged a carnival just for me! We took the day to relax and recharge before Dave went back to work on Thursday. While he was at work, I unpacked and settled into the flat, took a walk to the supermarket and of course typically this was the first day of real sunshine and extreme heat! It was Dave’s birthday on Thursday but after the fun and festivities of the previous week he decided he just wanted a quiet night. We celebrated on Friday though with some of the guys from GSK - we went for drinks and ended up in a Mexican restaurant! It was a very fun night. The next day (yesterday) we spent on the beach - it is gloriously hot and sunny this weekend but there is a lifesaving sea breeze which I love.

I think that’s all of the important stuff, so you’re pretty up-to-date with the situation over here now. Keep an eye out for some more posts about the parade over the next week – there are so many photos but trust me, they are well worth a look!

Oh and I set up a twitter account so go ahead and give us a follow - @morningcalmblog! Not much tweeting going on yet but it'll be picking up soon and will contain stuff that isn't going in the blog so don't miss out!