Lisbon in My Mouth

Where to begin?! There is so much fantastic food in Lisbon and I definitely only licked the surface of what it has to offer, but everything I ate was top quality. Especially when we ate at Belcanto! At the end of the post I'll talk about this very special meal, so make sure you read the whole thing!

Unfortunately, I didn't get photos of everything we ate on this trip because Dave wasn't there to remind me before I started stuffing my face! So before we get stuck into the pics, there are three things I want to mention:

Bacalhau - one of the most well-known Portuguese foods.
On our first night, after the weird (and wonderful) walking tour ended, we were starving and stopped at the first place we found that was open. We got some of this famous salted cod and it was really delicious. It wasn't too salty, which was a pleasant surprise, and it was meaty, juicy and HUGE! It was a very simple dish, with just a mildly garlicky butter to dress the fish and accompanying boiled potatoes.

Ice cream - a necessity in the heat of summer!
While wandering around one evening we spied a cute looking artisan ice cream shop called Gelato Therapy. We each chose a flavour and were very impressed by the quality. The honey, lemon and thyme sorbet was delicious, as was the intriguing vanilla and basil gelato. But we all agreed that the star of the show was the pine nut ice cream - so creamy and subtly nutty, unlike any ice cream I've tried before (or since).

Vinho verde - green wine?!
Although the name may suggest it, this wine actually green. The "verde" here refers to the youngness of the grapes, which can be used to make white, rosé or even red wine. We only tried the white version of this popular Portuguese wine, which was lightly sparkling and on the drier side of medium. Very refreshing and wonderfully cheap.

Ok, now to feast your eyes on the things we feasted our mouths on! 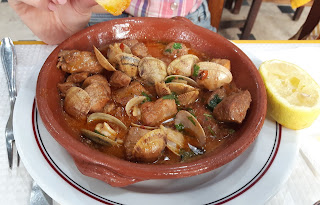 When we first arrived at the hostel we were famished! So we asked the guy at reception where we should eat. We said we wanted to go somewhere close, where we'd find an old moustachioed man sitting in the corner. And that's exactly where we ended up! Jen ordered this clam and pork stew called porco à alentejana, which was delicious. The sauce was so rich and the pork was practically falling apart! I am told the clams were spot on too. 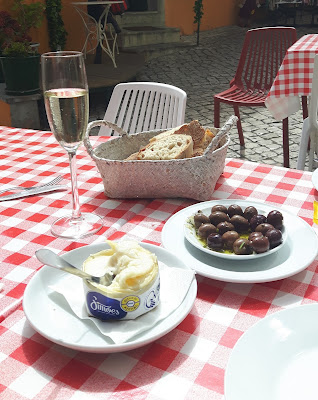 When we arrived in Sintra we were pretty hungry (surprise surprise!) but most places hadn't opened yet. Luckily we found a small restaurant with a rather attractive waiter who let us sit outside in the sun and enjoy some snacks before the kitchen got up and running. We ordered some vinho verde and some olives, which I didn't eat because I just do not like them. But they were apparently delicious, having been marinated in garlic and rosemary. At the suggestion of the waiter we also got a small wheel of queijo de azeitão. This is a delicious soft, creamy but pungent Portuguese cheese, not too dissimilar to a gooey camembert. According to its wikipedia page it is considered one of the fifty best gastronomic products in the world! And deservedly so, if you ask me. This was the perfect mid-morning snack before we set off to see the sights.

I may not have a photo of the actual piece of bacalhau I ate, but this dried, salted fish comes in many different forms in Lisbon and I got pics of two of them. First we have bacalhau à brás (left). This is a simple dish of shredded cod, sliced onion and matchsticked potatoes, all fried and then bound together with egg. The egg seemed to only have cooked with the residual heat from the other ingredients, making it very creamy. This was an absolutely delicious, truly comforting bowl of joy and I'll definitely look out for it on menus next time I'm in Portugal. The second dish (right) is probably one of the most famous ways you can eat cod in Portugal - pastel de bacalhau. This is is a simple croquette made from the shredded bacalhau mixed with potato, with a creamy soft cheese in the middle. It's deep fried so that the outside is crispy while the middle stays light and fluffy. Not too fishy and very moreish. 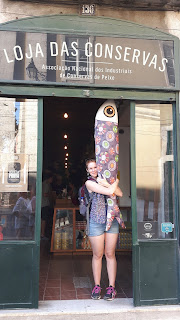 Alongside the salted cod, fresh seafood in this coastal city is top quality, with particularly excellent octopus and mussels. But the most famous of the underwater delicacies are the sardines. Whether fresh or tinned, Portuguese sardines are considered some of the best in the world and in Lisbon you can't swing a cat without slapping someone across the face with one of these slippery little fellas. It's a huge tourist attraction, as evidenced by the countless shops selling hundreds of varieties of tiny tinned fish in different oils and sauces. But the fresh ones are much bigger than I had expected, and as you can see below, the portions are often pretty large too! I find these smaller, oily fish to have too strong a flavour and I am not a fan at all, but Jen and Hazel thoroughly enjoyed them, especially the fresh ones, chargrilled and simply seasoned with salt and pepper. The bones can be a bit of a faff but they assure me it's worth the effort. 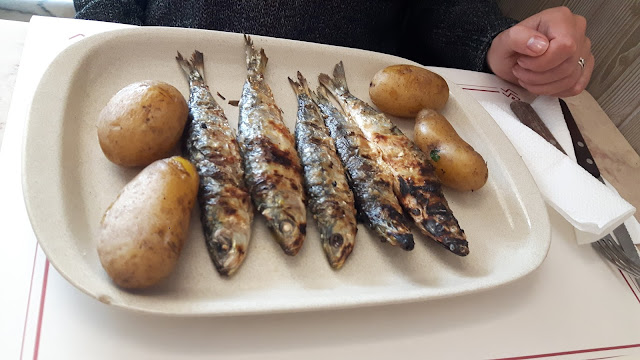 Dave has a couple of things to say about the aquatic dishes he ate in Lisbon too, which is good because you know it's not really my cup of sea...

This was the nicest octopus dish I've ever had. It had the perfect texture. Words cannot describe this. It was like butter. And boy do I love swordfish! I always use a holiday without Katie to eat seafood, as she isn't the biggest fan. 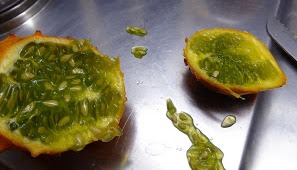 We also tried this weird fruit, which is apparently a horned melon. It's native to Africa and I had never seen it before. The texture was a bit like passion fruit and it had a citrus flavour. Not great hence why you probably haven't heard of it.


We're almost there folks...almost time for the super special supper surprise! But I couldn't possibly write a food post about Lisbon without mentioning pastéis de nata. These are, in the most basic of terms, custard tarts. But to leave the description there would be close to criminal! Let me explain...first you have the pastry case. This is made with layers beautifully crispy, flaky, buttery pastry that is only just strong enough to hold the filling. The filling consists of the lightest, creamiest, softest sweet custard you can imagine. The tarts are baked so that a very fine, charred skin forms on top of the jiggly, wiggle custard below. Best eaten warm, the pastéis are traditionally served with a generous dusting of icing sugar and cinnamon, and go wonderfully with a strong, black coffee. These pastries are world famous and one of the best things to eat in Lisbon, especially if you go to the (apparently) original bakery in Belém. 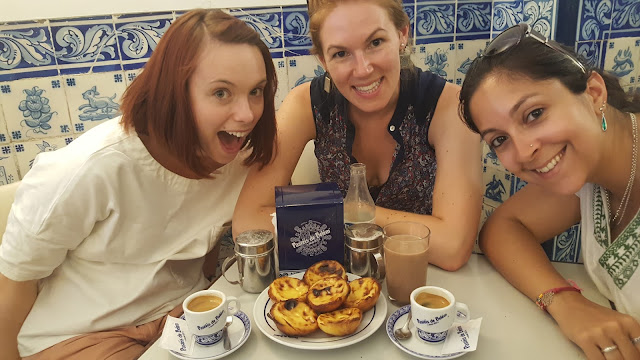 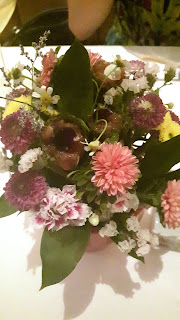 And now, the moment you have all been waiting for...Morning Calm's Michelin Meal! As explained in the previous post, we decided treat ourselves to the extravagant tasting menu at Belcanto as a joint 30th birthday present to each other. It was my first experience of this kind of meal, and something I will never forget. We chose the Menu Lisboa, which put a modern twist on traditional Portuguese dishes. Each of the courses was spectacular, from the bunch of flowers with sushi hidden inside, to the smoked butters they served with the bread! While a couple of things I tasted were slightly too fishy for me, I enjoyed every mouthful. Each course was full of surprises, with flavour and texture combinations that kept us guessing from the first to the last bite. There was too much going on to describe it all to you!

After we left the restaurant we spent ages discussing the different plates, trying to pick our favourites. I eventually settled on the one called the garden of the goose that laid the golden eggs, which was an absolute delight. It was just like they describe these kind of dishes on telly; the layers, the depth, the different flavours coming and going as you chew...It was a magical experience and to be honest, I don't really have the words to describe it well enough. Or the photos. The restaurant didn't have the best lighting for photos and, while I did snap each course, my focus was on the experience so most of them are not really worth sharing. But fear not! You can see some of the dishes we ate, including the golden egg, on a fantastic Netflix programmed called Somebody Feed Phil. I highly recommend you watch it and even more than that, I recommend you visit the restaurant! 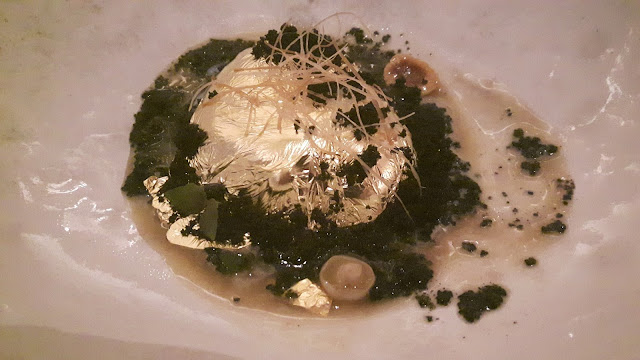