Italy In My Mouth

Oh Italy, you delicious beast. It's been a few years but I can still remember how you taste. We ate so much and it was pretty much all fantastic, so I'm going to keep the words to a minimum and let the pictures do most of the talking. But trust me, this one is definitely worth reading all the way through.

First let's take a look at some of the classics - ice cream, pizza and pasta - oh my! 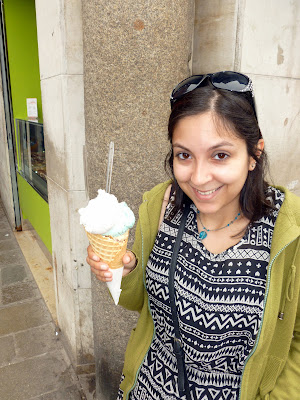 The gelato was outstanding. And we definitely ate enough to speak with some confidence on the matter. And of course, mint choc chip featured almost daily! 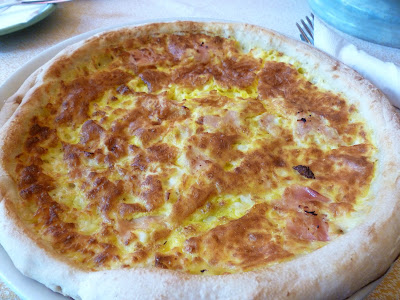 This may look like a pizza, but it's actually a ham omelette, baked inside a ring of dough. Dave was more than a little impressed. 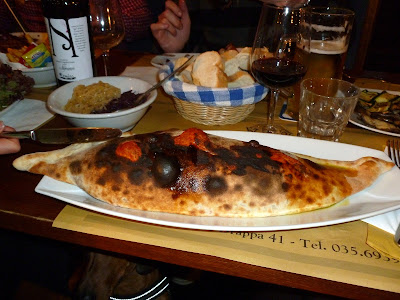 This HUGE calzone was for one person...luckily that one person was Dave! 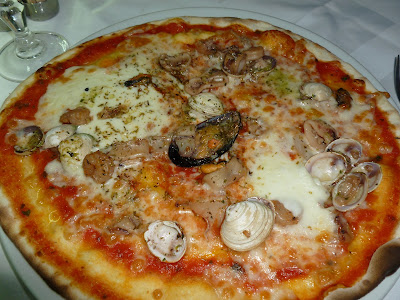 Seafood might not be a groundbreaking pizza topping but when the clams are still in their shells, it does present an unexpected challenge. 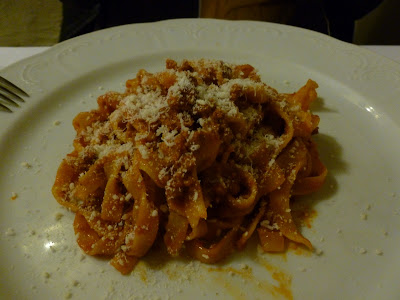 We couldn't go to Bologna without having bolognese! It came with tagliatelle rather than spaghetti, and was pretty darn delicious. Best I've ever had? I can't be sure about that one, as it was a favourite of mine for quite some time so I've eaten a fair few bowls of the stuff over the years. But it was scrumptious. 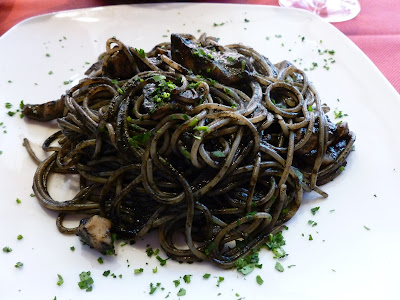 Dave ate this spooky looking squid-ink pasta with seafood and loved it. It's not often you get the opportunity to eat black food, and it amused me greatly that it turned the inside of his mouth black! 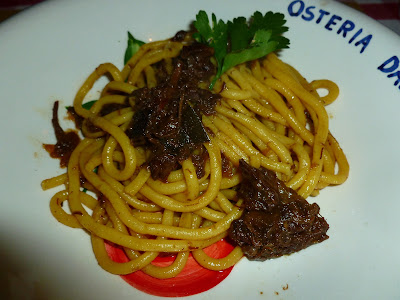 This next one is a little weird - bigoli, which is like a thick spaghetti, with a ragu made from...donkey meat! To be honest, everything tastes so good in Italy that I'd eat doormat ragu if it was a local delicacy! 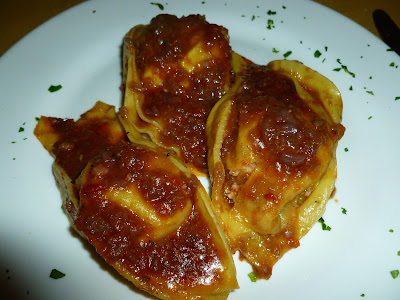 The final pasta dish I want to show you are these three, plump, shiny, beautiful raviolis. Truly delicious - so rich and flavoursome.
Right, now it's time for some other, less "obvious" tantalising tongue-ticklers...man, I am salivating so much writing this! 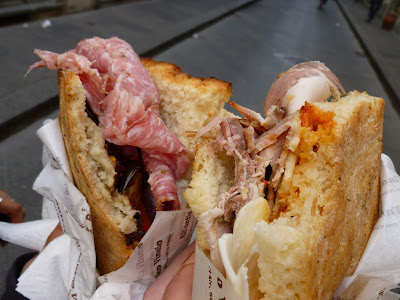 PANINIS! Did you know that 'panini' is actually plural? So it's one panino, two panini...but when they're this tasty, who's ordering one at a time?! I can honestly say that this was one of the best sandwiches I've ever had. The taste-memory has faded with time but I can distinctly remember a flavour of fennel in the salami, which went beautifully with the roasted aubergines. 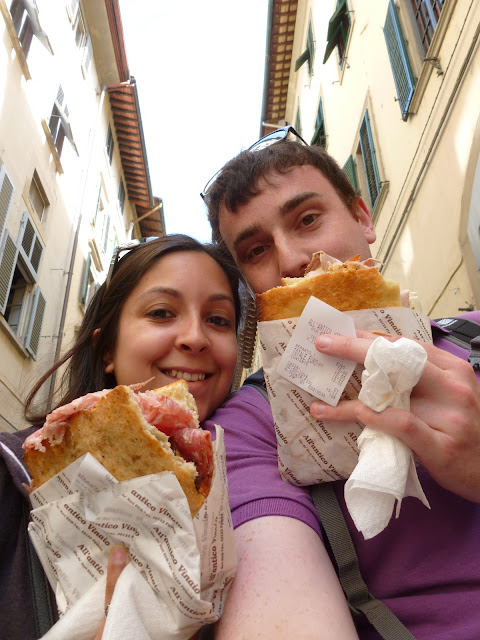 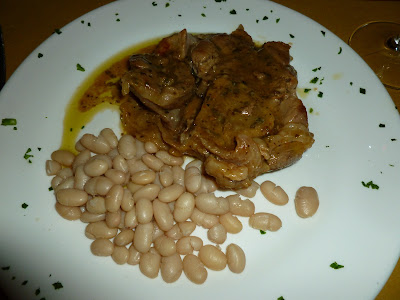 This simple looking dish was deceptively delicious. The beans were tender and well seasoned, and the meat was well cooked but both of these were completely forgettable once we tried the main attraction - BONE MARROW! I think this was the first time I had tried this heavenly nectar and wowzers...there are no words. 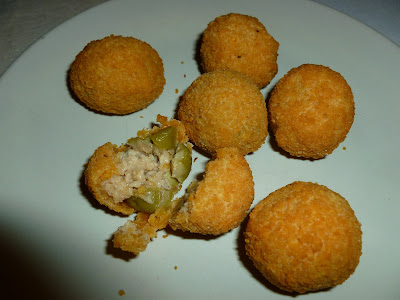 This is something I hadn't seen before - deep fried olives stuffed with tuna. I didn't try them, obviously, but Dave really liked them. 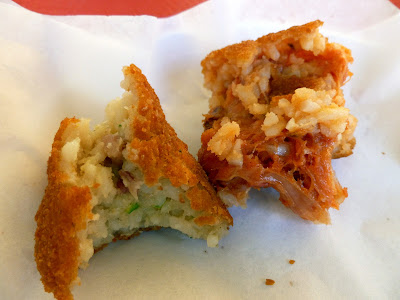 We did try some arancini, but I have to say I'm not a fan. They are balls of risotto rice, stuffed with various fillings and then deep fried with a cripsy coating. I'm just not a fan of the texture of the rice, but maybe I just haven't had really good quality arancini. 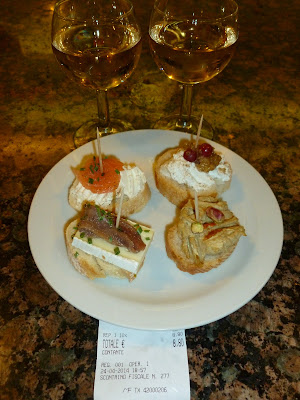 One of our favourite things to do in Venice was have a glass of wine and some cicchetti. These are little snacks, usually bread topped with something scrummy. Here we have cream cheese with smoked salmon, whipped goat's cheese with walnut and redcurrants, something like brie with an anchovy, and a nutty, creamy spread with pistachios. These dreamy bites with two glasses of wine came to €8.80, which is a blumin' cheap way to eat in Venice! And if you pick the right place, you can take your treats outside and enjoy the view while you eat. 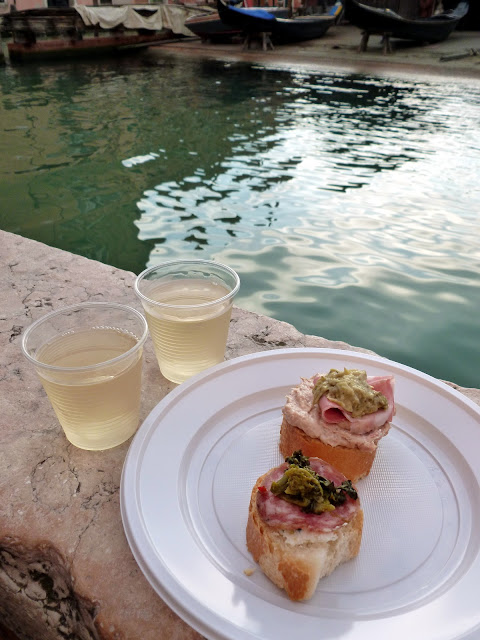 These next dishes stood out from the crowd not only for flavour, but for the size of the portions. The Italians sure are generous! 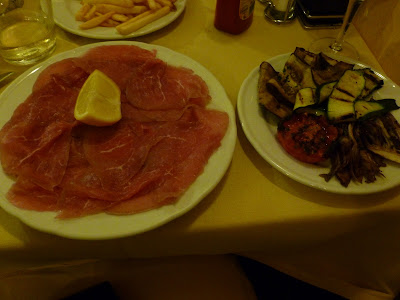 If you can believe it, this huge plate of carpaccio was Dave's starter! Now I know you think this is something I'd remember, but for the life of me I can't be sure whether this was beef or horse...either way it could feed an army. 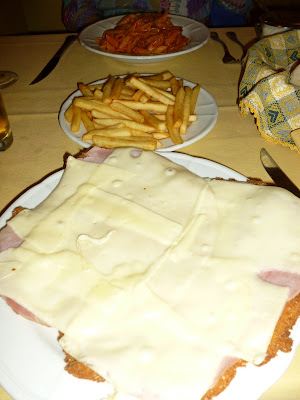 And it was followed by this ENORMOUS piece of breaded veal, topped with a layer of ham and melted cheese. Man were we stuffed! 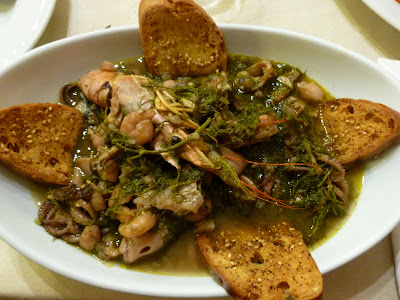 The next mega-meal was this gigantic seafood stew, which had every kind of aquatic creature you can think of, bones, shells, tails and all. It was an orchestra of textures and flavours. Or so I'm told. 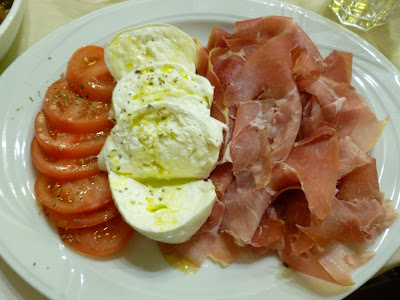 And while Dave was slurping his way through the ocean, I was attempting to polish off this ridiculously large tomato, parma ham and mozzarella "salad". How this can be classed as a salad, I just do not know. But boy was it yummy. 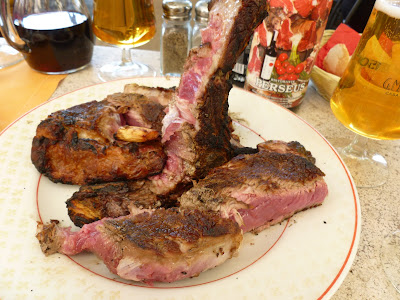 And finally, the star of our trip - the one thing I would say without a doubt, anyone visiting Florence should go and get. This, my dear readers, is the biggest and best steak I have ever eaten. The meal, for which we had travelled to Fiesole, started with a beer, followed by a glass of wine. These were polished off before the food came, so of course we ordered a carafe of wine to enjoy with the steak. I think this is the main reason we both fell asleep on a bench in the village square afterwards. Anyway, I digress.

This huge hunk of meat was served to us rare, with our choice of sides. We opted for simple potatoes and red peppers, which were a perfect match. There was a huge bone running through the middle of the steak and it was carved and presented to us in this rather bemusing way. It was a beast of a meal, but my god were we determined to finish it. And finish it we did!

As someone who likes a lot of flavour in her food, I am sometimes a little disappointed by steak. I can get a bit bored, chewing my way through endless mouthfuls of meat. But this was so charred and gnarley on the outside and so juicy and sweet in the middle...this is what a real steak tastes like. Trust me, go get yourself one! But definitely take a friend - they don't do individual portions! 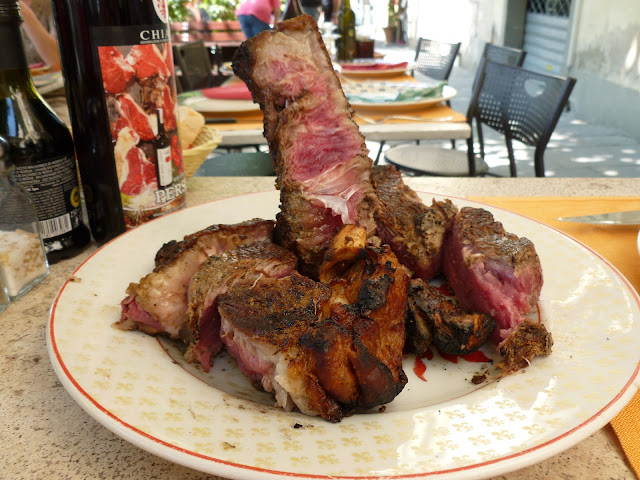 Email ThisBlogThis!Share to TwitterShare to FacebookShare to Pinterest
Labels: Spain, In My Mouth, Weird and Wonderful In My Mouth, It Food, Italy
Newer Post Older Post Home