Yes the title of this blog is honeymoon. But no, Katie and I have not got married. Well we sort of did last week when we signed a document to prove we have been in a common law / de facto marriage, but this post is about my arrival in Brasil! (Katie is arriving later this month, which gives me a chance to settle in and ensure I am better at Portuguese than she is).

I will not talk about the flight and travel and that nonsense because it’s the same old story of flying over 5000 miles in less than a day: a feat impossible only 100 years ago. Aeroplanes are one of those technologies that continues to blow my mind whenever I stop to reflect on it... So yes it was just a simple 15 hour flight, 1 change... Although I have written a complaint to the airline: Italian Airways or Alitalia as they are known. It’s a long story. And by long, I mean uninteresting, which is basically always what people mean when they say “long story”.

I couldn’t say “I arrived jet lagged”, as Rio is only 2 hours in the past. It’s basically like having a triple espresso in the morning and just feeling like you have more time. My very first impressions were mixed. The immigration queue took over an hour to get through and was surprising lax. I jumped in a taxi and paid £30 to go for 50 mins in what seemed like a real life version of Crazy Taxi. I know the rules of the road are different wherever you are... but this particular taxi driver was genuinely crazy. He drove like John McClane in Die Hard 3, aiming for people, and what have you. He spent as much time on the hard shoulder (no-one else decided to drive there) as he did on the main shoulder... He weaved, sped, and even when I told him I was in no rush and was happy to pay to go slower, he still went faster than Usain Bolt on steroids running on one of those airport travelator things.

Besides being mildly crippled with agonising fear of someone snatching my worldly goods, I was able to observe Rio through the taxi window. I saw a city of beauty and sunshine, as well as poverty and hardship. It’s difficult to comprehend poverty when I have seen and met people with such vast wealth. Anyway this isn’t a post about my political standpoint, it is much more about my happy honeymoon period in Rio. The taxi pulled into my apartment complex, which I recognised from my Google Maps page. Love at first sight does not exist for locations anymore now that Google Street View has happened.

The apartment complex is in front of Barra de Tijuca’s 18km beach. The beach is something else. It’s over 30 degrees at the moment and the sun has not stopped shining. Real feel on accuweather shows the heat from last week. It was 47 degrees on one day and I even saw a new graphic of a thermometer. 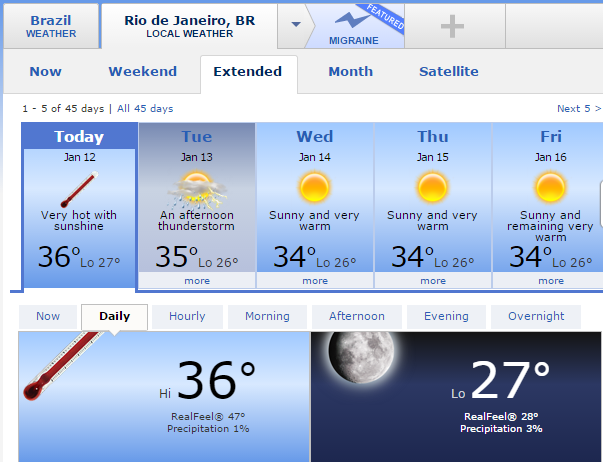 It’s here that I need to give credit to P20 - the sun cream that has protected me thus far, hence why I brought 1.2 litres of it with me. The waves are constant and I feel like a young boy again fighting to hold back the ocean. That is not a metaphor, I just used to love playing in the ocean as a boy. Who am I kidding, I still love it now!

by the beach opposite the apartment on my first night.


I was surprised they had thrown me a party as I didn't realise I had so many fans in Rio. I later found out that it was in fact for someone's birthday and was not a celebration of my arrival. When they later sang "Happy Birthday", I was tickled as it was to the same tune as the original.
The first couple of days have felt like a holiday. Except I am not on holiday. This is now my life, living a six minute (I timed it) door-to-feet-in-ocean walk away from the longest beach in Rio. Yes the honeymoon period won’t last forever. But if I have learned one thing in my short time on this planet, it’s to enjoy these moments when they come.

Barra de Tijuca has been described to me as the Miami of Rio. Under 6% of the population live here, but it generates 30% of the tax for the city. Basically I think that means it is a wealthy area, or Rio has a particularly uneven council tax system. Long term followers of the blog will enjoy the next stat: Barra Shopping is the largest shopping centre in South America. Having lived in Busan, home of Shinsegae, the largest department store in the world, it seems like fate / coincidence that has put us in Barra. (If coincidences are just coincidences, why do they feel so contrived?)

Barra will also be home to over 50% of the Olympics in Rio 2016 so let’s hope we’ll be here to see it. It has many residence complexes like the one I am staying in that have shared amenities with good security and the comfort of home. That means I have a swimming pool, tennis court, private and free cinema, saunas, gym, and a restaurant. Absolute bliss.

My overall thoughts on the first week are largely positive. I won't talk about my new job yet (everyone is lovely so far) but instead focus on the emotional side of things.

I had forgotten what it was like to be in a new and vastly different culture about to undertake a new chapter in my life. All my talk of preparation, and even the handy guide my company sent me, I still hadn’t prepared my mind for the honeymoon period of living somewhere new and exciting. The joy of tasting new foods, seeing different animals, watching the habits / oddities of a different culture.

It’s interesting that the cynic and anxious side of me has fully prepared me for the culture shock and annoyance of another country’s bureaucracy affecting one’s ability to carry out simple everyday tasks such as buying a bus ticket. But I didn’t remember the elation and the adrenaline buzz of being surrounded by difference. I notice I am most grateful at these times, which makes me a happier person. I believe that happiness is infectious and self perpetuating, just like sadness.

However I still have this nagging sense of not deserving what I have right now. I try my hardest to live a good life – I don’t cheat, con, steal, and try to minimise harm whenever I can. I am no saint but I try my best and more importantly try to learn from my mistakes. Yet this feeling of “undeservedness” stays with me whenever I receive good things in life. Jim Carrey touched on this in an interesting speech that is worth a watch from around the nine minute mark. That said, it is no Tim Minchin university address, which I still watch every few months. Jim said that “it’s about letting the universe know what you want, working towards it, while letting go of how it comes to pass.”

Unfortunately like any good advice that I have received by the many people/teachers in my life, it’s easy to hear but harder to follow. A sense of entitlement doesn’t come easy to me, even though I live a very privileged life. I have my parents to thank because it’s better to feel undeserving than to feel entitled – I imagine it limits disappointment... and it makes you seem like less of a dick.

Anyway ignoring this minor quibble, I’m very happy at the moment. Life is unlocking a lot of doors and I am grateful. I also want to show gratitude to the family and friends that have helped me. Whether I needed a wise word, a hug, a home, a "like", or simply a laugh – you have all been there to deliver. I am very lucky. So thank you.

I know some people (especially Brits) think showing positive emotions and adulation is somehow odd, boastful, or self aggrandising. The internet and the ability to connect to so many people certainly can promote that type of behaviour. But this is not. Right now I am showing happiness to promote happiness. I want to infect you! (It also means that the more distasteful and angry blogs aren’t what define my online persona).